In Conversation With: Interior Designer of the Year 2019, Jo Littlefair 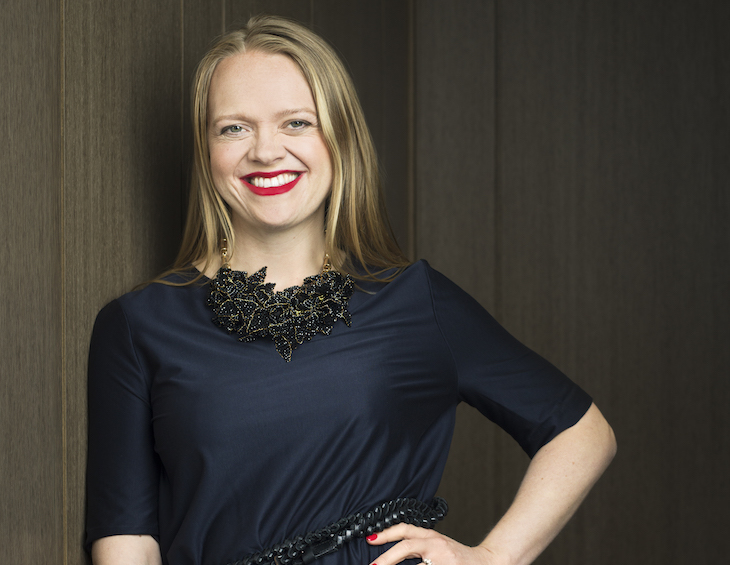 Securing her place in the history books, Jo Littlefair came out on top last year at The Brit List Awards 2019, spectacularly winning the coveted title, Interior Designer of the Year. A few months later, she welcomes editor Hamish Kilburn into the Goddard Littlefair HQ to give him a glimpse into studio life…

“Jo, can I borrow you for just a second,” says senior associate and architect David Lee Hood as Jo Littlefair and I walk through the studio. “This archway,” he says pointing to a life-like rendering on his monitor, “what are your thoughts on adding in a line of colour here?” As he shows the before and after, it is a game of ‘spot the difference’ to the untrained eye. But for the multi-layered studio Goddard Littlefair, where the devil is so often in the detail, it could be the difference between winning a pitch or losing it, as any design practice operating on today’s international scene will confirm.

“We have made a few changes to encourage people to come and talk to us more.” – Jo Littlefair, co-founder, Goddard Littlefair

The short but important moment is proof, if ever I needed it, that Littlefair likes to naturally lead from within her team. And as we walk through the open-planned office that is flooded with natural light towards her workstation, I notice also that there is no door, and no boundary, between herself and everyone else in the building. 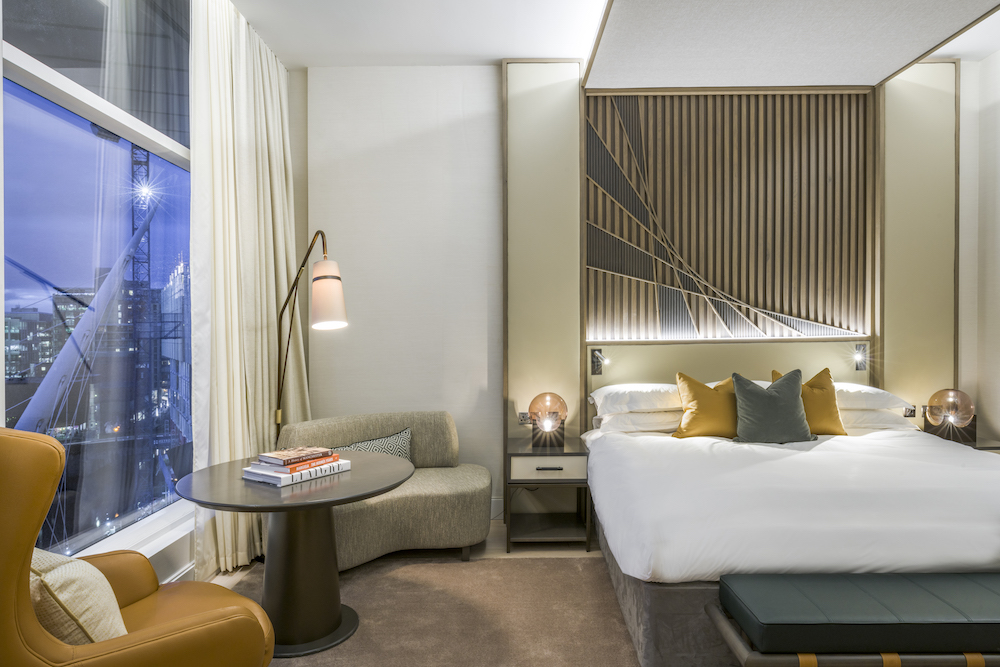 “We got to the point last year when, as we reached 60 employees, we decided Goddard Littlefair was too big as a studio,” she confesses. “We have made a few changes to encourage people to come and talk to us more, because I would rather know about something – and be able to comment at a point where it is possible to comment – rather than get further down the line and it be too late. At the end of the day, leading this design studio with Martin Goddard has always been a collaboration, not just between himself and I but also our team.” As the designer is explaining, I notice that there’s a cordial and relaxed atmosphere in the Clerkenwell studio, and the strong relationship between the co-founders and their team is apparent. 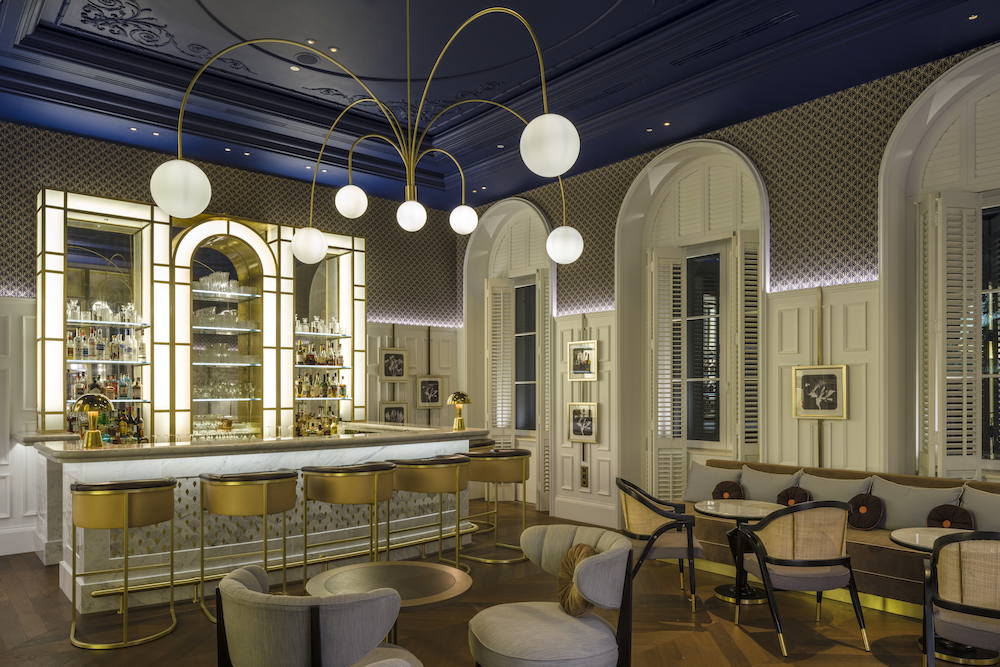 “We look at the finer details, as you have just seen, that perhaps make a space look and feel more residential,” the designer explains. “Things like tabs on the curtain pole having a little leather strap and a metal rivet, and it’s those elements that give it quality and detail. It’s important that someone has thought about it in that much detail, and there is a reason why it’s leather and why it’s embossed, or whatever.”

“What’s most important is that it has to be right for our client, the property and the location every time.” – Jo Littlefair, co-founder, Goddard Littlefair

Recently completed projects within the studio’s portfolio include The Biltmore Mayfair  London, Hilton Imperial Dubrovnik , Sheraton  Grand Warsaw , the new F&B areas inside Hilton Munich City, The Lowry in Manchester and the Kimpton Charlotte Square. Having followed many, if not all, of these projects from concept through to completion, it’s fair to say that the studio believes that variety is the spice of life. “We don’t like being pigeon-holed,” explains Littlefair. “We have a great variety of style, which is fantastic. Also, we are not divas when it comes to our personal taste. What’s most important is that it has to be right for our client, the property and the location every time.” 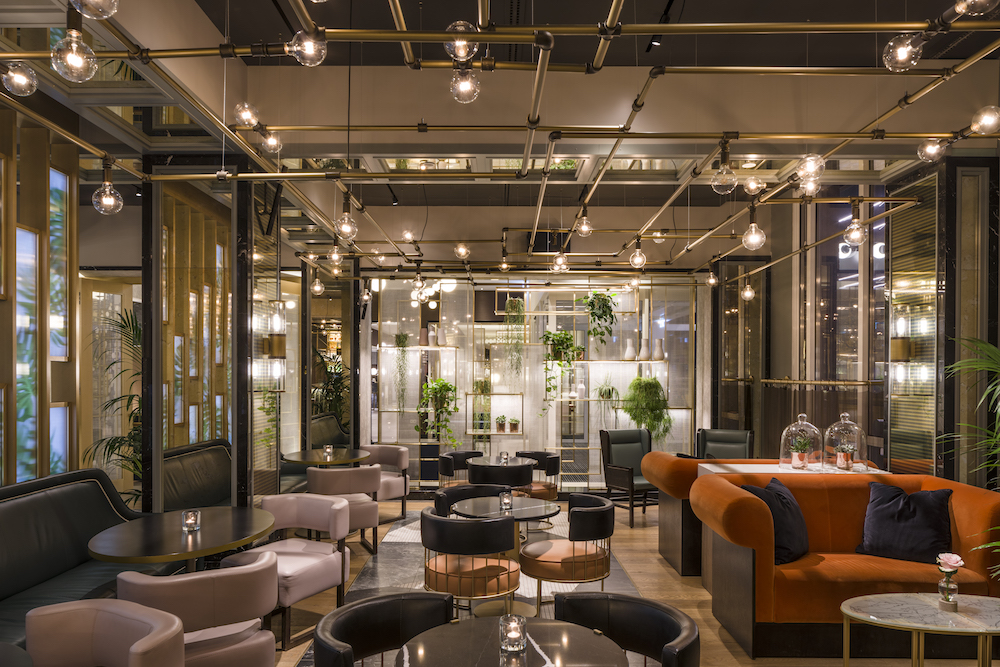 Despite the studio clocking up the air miles with unavoidable trips abroad for site visits and account management, in order for the team to understand the culture and fabrics of new destinations, the studio’s HQ is positioned slap-bang in the epicentre of the design community in London, just a few streets behind some of the city’s major design showrooms in Clerkenwell. “There is always a corner of London that you can find a narrative to that is really individual,” says Littlefair. “Whether  When? you are living, working and breathing in London, like many of our designers, the city becomes a fantastic place. I think that’s because it is made up of villages that have, over time, morphed together. As a designer working on a project here, the identity of what those villages were can really shine through.”

“I literally had to work my way around the world, and it made me a different person.” – Jo Littlefair, co-founder, Goddard Littlefair

Despite London having its place in the designer’s heart, Littlefair mostly finds inspiration in design from nature, and decompresses daily from city life, after a hefty commute, in Buckinghamshire where she lives. “It’s a very open community, close enough to London for work, but full of fresh air,” she explains. “My kids love it there, and so do I!”

But where was Littlefair’s inquisitive nature born, I wonder? “When I left university and went travelling, technology as we know it now didn’t exist; email had just come out for crying out loud,” she admits. “I used to pay to sit in a café to type an email home to say I’m alive. For me, that was about really cutting off from the world. My mum didn’t think I was going to come back,” she laughs, “I did some crazy things; I worked out on boats and I threw myself into experiential travel, albeit on a shoestring. I literally had to work my way around the world, and it made me a different person. Experiencing places and learning about people and cultures.” 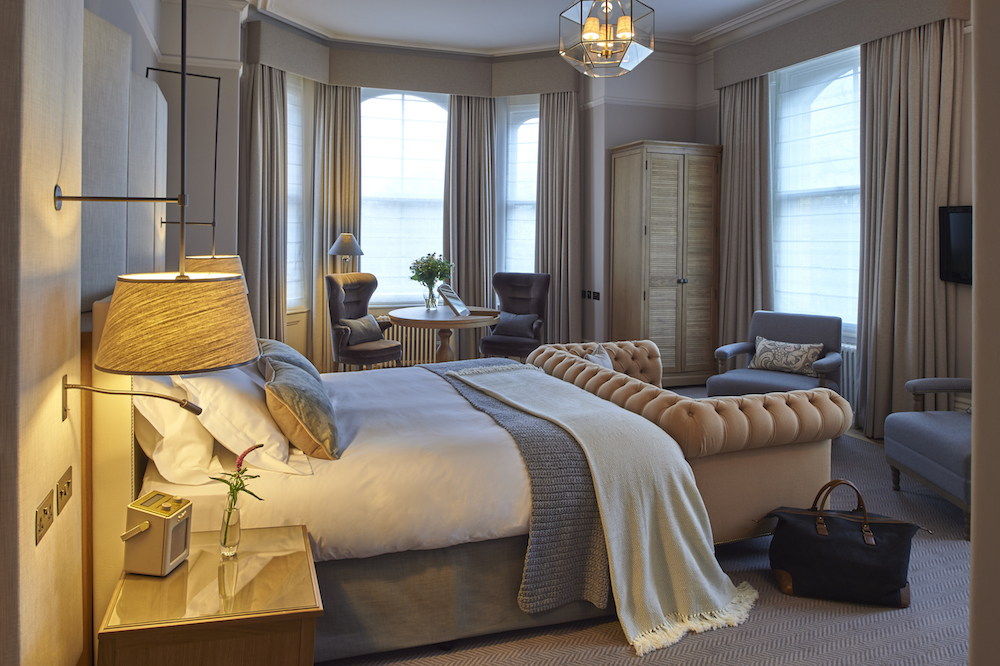 HK: What’s next on your travel bucket list?
JL: Chile , Argentina and Egypt.

HK: What would you say is the number-one tool for success?
JL: Hard work, and you can’t teach taste. I learn something new every day, nobody can know everything!

HK: Who was your inspiration growing up?
JL: The reason I made it into interiors is because I used to work on super yacht designed by Terence Tisdale. I couldn’t believe that somebody got paid to put this together and design with  all those beautiful timber veneers and mirrors everywhere, which I had to clean! I spent four months in the Med working on this 64m Feadship  . It had everything and gave me an insight into luxury and interior design.

HK: What is the one item you cannot travel without?
JL: This is ridiculous but my cashmere jumper, which is so not me. You will always find a lightweight cashmere jumper in my flight bag!

HK: What is the last item that will show up on your bank statement?
JL: Whole beans for my coffee machine. Always buy a small bag because you want the freshest roasted beans for your coffee.

HK: What has the last year taught you?
JL: To keep everyone in the studio on one floor, so that we are working together. Also that quality far outweighs quantity.

“Think of it as the destination’s answer to The Ned.” – Jo Littlefair, co-founder, Goddard Littlefair

Back to today, and the studio is currently hard at work with a number of projects on the drawing boards. The studio is currently working on designing four restaurants and bars inside the soon-to-open 360-key Villa Copenhagen. “Think of it as the destination’s answer to The Ned,” Littlefair teases. “But it’s so not about men and women in suits. Instead, the whole project has been about understanding the Danish vernacular, the locals’ way of life.” 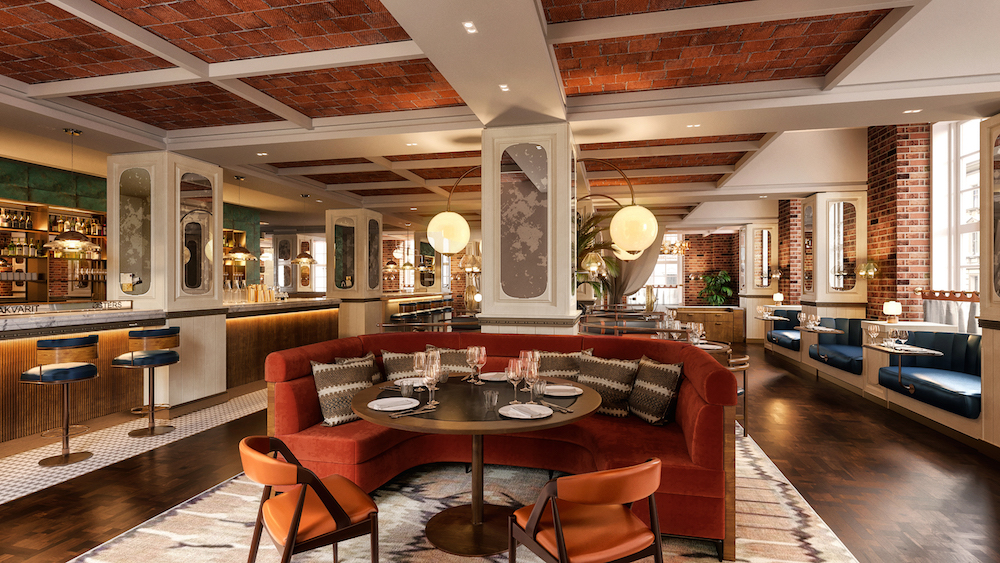 Image caption: CGI rendering of The Brasserie inside Villa Copenhagen 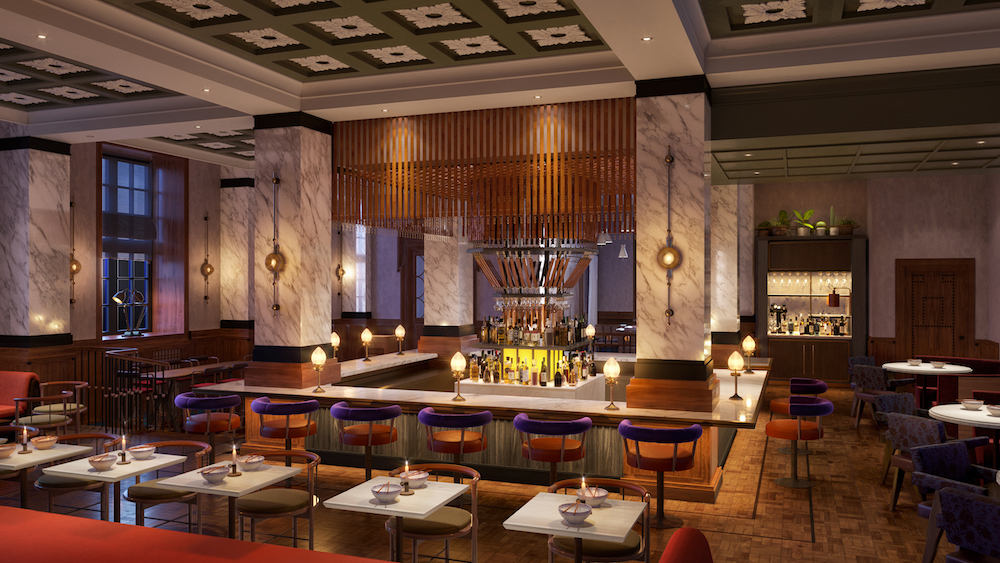 Other projects that the studio is working on include five star resorts on the Mediterranean coast line, the repurposing of a beautiful Viennese building to a 150 plus bedroom five star hotel and what may be the future best spa in London. 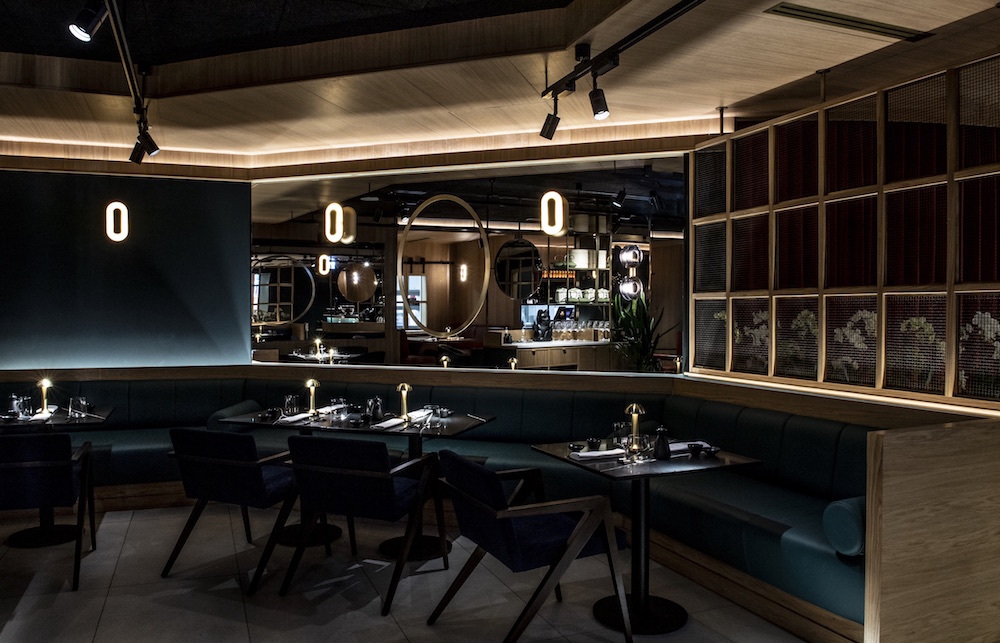 As two people who are, parallel to others in the industry, so thoughtfully leading interior design forward in terms of meaningful innovation, Goddard and Littlefair both feel pressure to adapt sensitively with the times while also maintaining a fundamental quality. And their approach to evolution is enlightening.  “Someone once told me that everything in life is a phase,” explains Littlefair. “I have learned to embrace change and see it as a positive. It is intrinsically scary to human nature, but when you learn that it is necessary to be a little bit cathartic about things, life runs smoother.” I would argue that it is this breath-of-fresh-air attitude that led the designer to win The Brit List Awards’ Interior Designer of the Year 2020.

“You have no idea how much the award means to me.” – Jo Littlefair, co-founder, Goddard Littlefair

“I just can’t believe it,” she said fresh off stage at the event in November when her new-found title was revealed in front of a sea of leading designers, architects, hoteliers and developers. Months later, and the reality of ‘that win’ hasn’t quite sunk in. “You have no idea how much the award means to me,” she says now. “The line-up of people you had there was fantastic, they are my peer group and I am very respectful of what everyone else is doing. So, that people within this industry consider what we are doing here to such high regard means everything!” 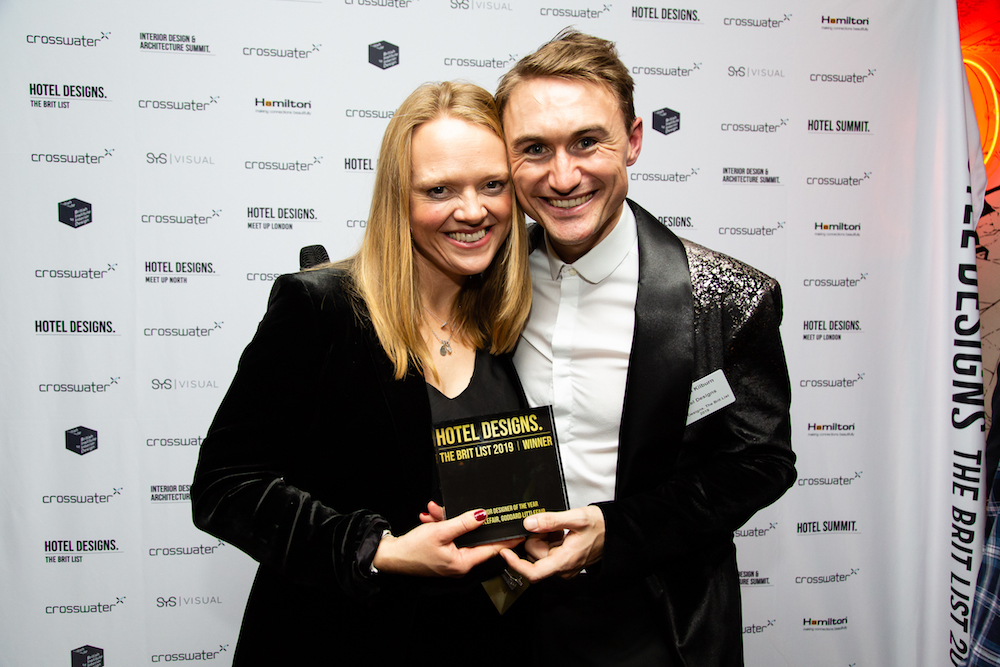 In a recent roundtable discussion that Littlefair attended, it was mentioned that all designers are having to work harder than ever before in order to differentiate from other styles and common motifs. As I sit around the table in the hub of her studio, I wonder how Littlefair and her team approach this topic when it comes to designing future hotels. “We are getting to the point where people have not seen a beautifully letter-pressed card before,” she says. “The ‘tech revolution’ has changed everything that we do and the way our work is perceived, but we can’t lose touch of humanity in the process.”

“We crowned a really worthy winner,” I can’t help by think to myself after I’ve said my goodbyes to the  Goddard Littlefair team. For me, it’s not necessary  necessarily? Littlefair’s work that is the most inspiring thing about but  the designer, but more her incredible journey, which was fuelled by hard-work, passion and determination, that I believe every single designer can learn from – or at least be energised by.