SPOTLIGHT ON: Hotel spas that naturally self-isolate in style 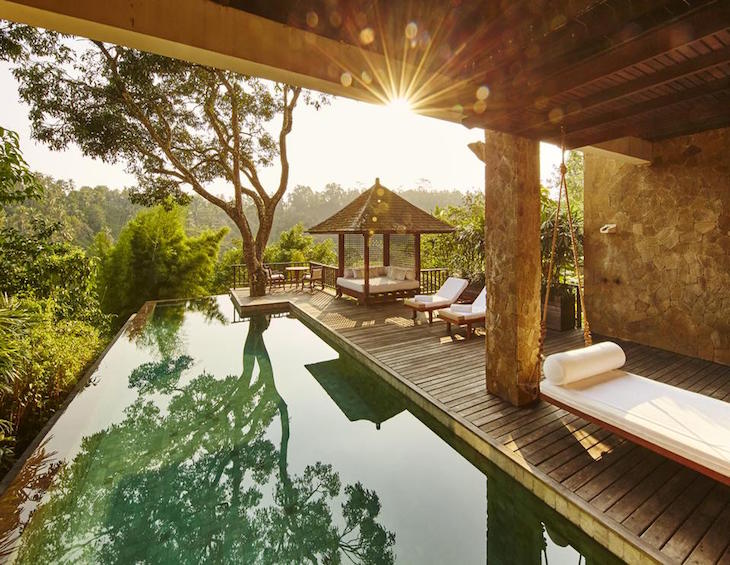 Throughout May, Hotel Designs is putting Spas and Outdoor Style under the spotlight. We continue with an editor’s round-up of some of the world’s most awe-inspiring spas. Hamish Kilburn writes…

Before the COVID–19 pandemic, and I am guessing long after the turbulent waters become calm again, architects and designers globally will question and creatively challenge the conventional spa and wellness experience in and out of hotels.

Despite pretty much all travel around the globe currently being on hold, the desire for quality treatments and checking in to relaxing escapes will return. With more and more hotel groups and brands developing their strategy around the rise in demand for wellness and wellbeing, Hotel Designs takes a look at the most dynamically designed hotel spas around the world.

Designed by architects Bertil Harström and Johan Kauppi, the Arctic Bath in Sweden was opened recently following much anticipation. The spa, sheltered in the bath house that floats on the frozen River Lule, was designed using natural woods and stone to create an eye-catching ‘birds nest style’ structure. 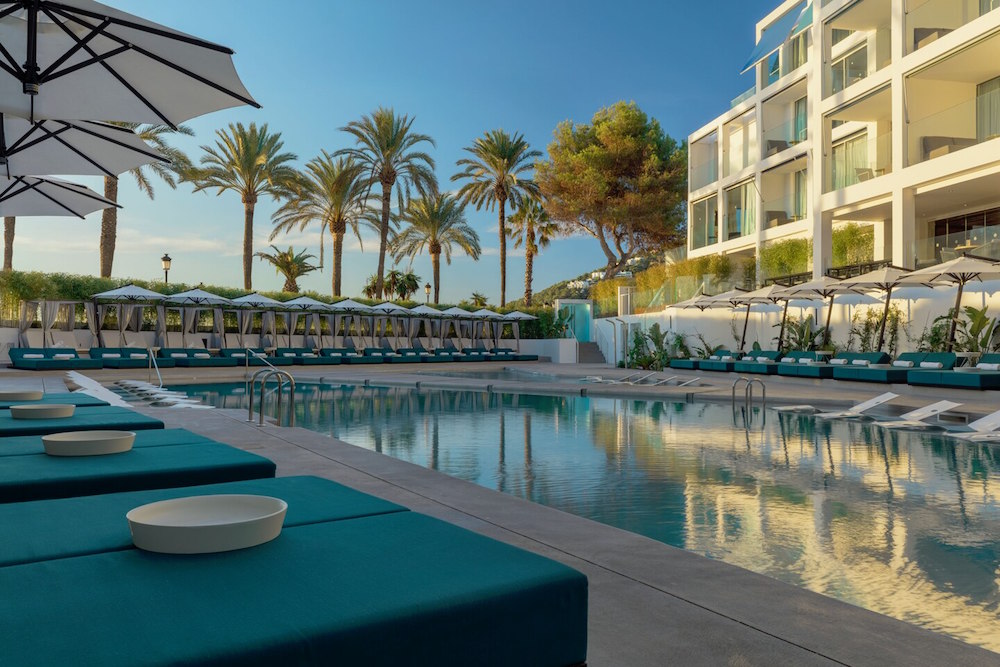 “When we first entered the building, which is positioned on the beach front, we couldn’t even see the sea,” the founders of  BARANOWITZ + KRONENBERG, Irene Kronenberg and Alon Baranowitz, told Hotel Designs when explaining how the concept of W Ibiza was born. “There had been no thought as to how guests would and should use these public spaces.” The energy of the water, unsurprisingly, became the design concept of the 167-key hotel’s public areas. By opening up the space to become a flexible social hub, the hotel becomes a place that nurtures human connections, and through the use of subtle levels creates touchable distance between each functional area. “The idea is that the energy descends into the unconventional pool area,” adds Baranowitz. “As you move up levels, the lobby/lounge area becomes more reclined, but the open architecture scheme allows for a clever connection between all spaces.” 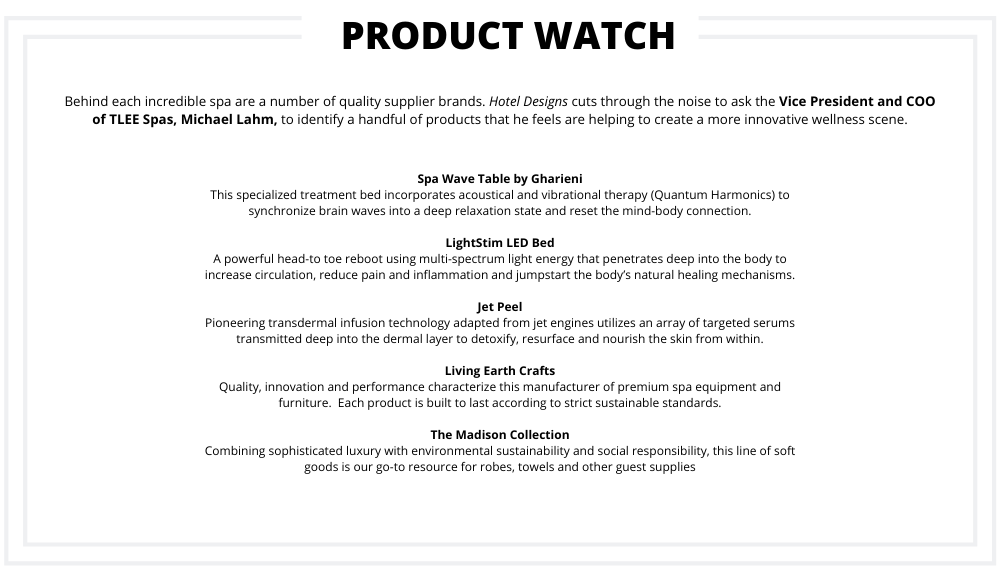 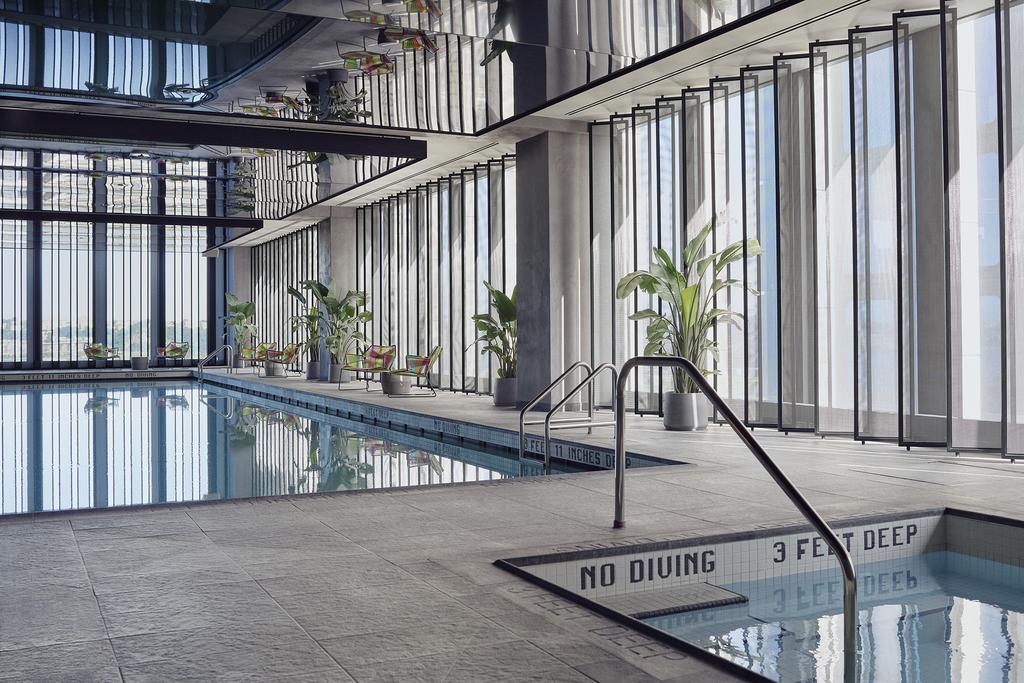 In the summer of last year, Equinox – the brand that made its name for opening and managing a tight-knit community of exceptional fitness and wellbeing clubs in major cities dotted around the world – opened its first ever hotel. Designed by David Rockwell and Joyce Wang to evoke comfort, creativity and focus, the ‘world’s fittest hotel’, as Hotel Designs labelled it ahead of its opening, is sheltered in a 14-storey limestone and glass skyscraper designed by architecture firm SOM. The hotel’s immersive 27,000 square foot spa area, which was the brainchild of Joyce Wang Studio and spa design and consultancy firm TLEE, maximises the most valuable commodity, time. The luxury wellness facilities include tailored treatments, an indoor salt water pool, hot and cold plunge pools, and our E.scape Pods — private relaxation areas that capture unparalleled views of the Hudson River. 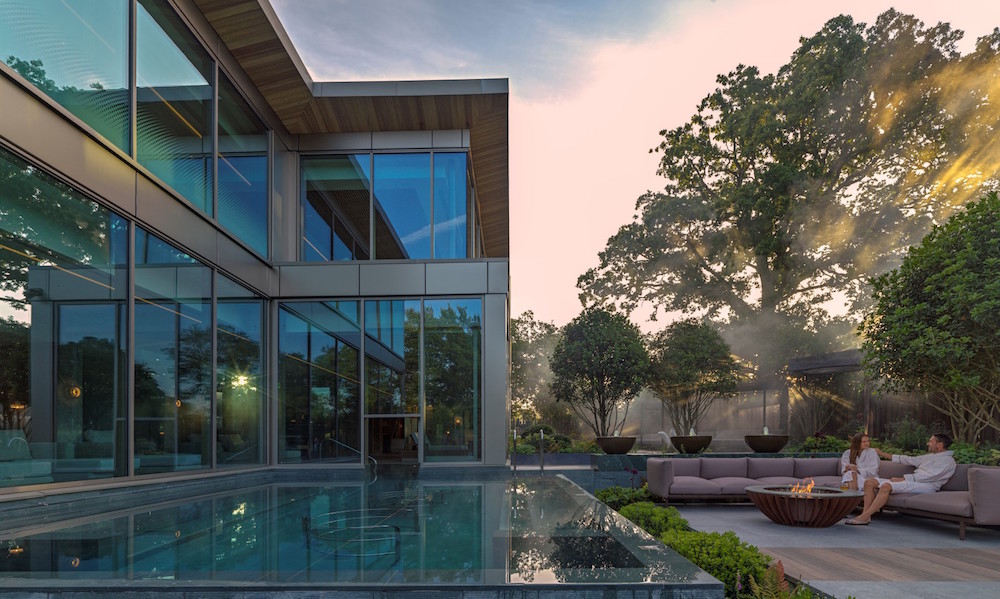 Following a £14m investment, Cottonmill’s three-storey, state-of-the-art, private members’ spa at Sopwell House in Hertfordshire is a break away from the conventional hotel spa. Designed by Sparcstudio, the spa has embraced the growing role of technology in the wellness world, with both the Dornbracht luxury shower, Sensory Sky, which recreates the sensation of showering in the open air, and the ELEMIS Biotec machine, which works to switch skin back on, increasing its natural cellular energy. Outside, award-winning garden designer Ann-Marie Powell created a space to enrich the soul. The botanical theme works around three secluded outdoor hot tubs and a swim-in/out hydrotherapy infinity pool. 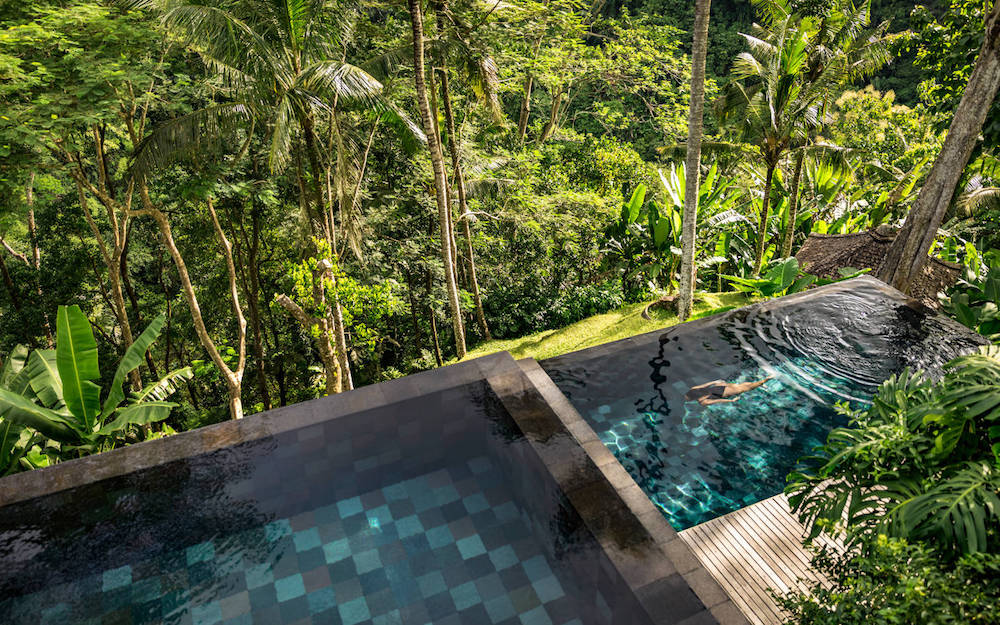 Set in a tropical rainforest in Bali – the hotel is nestled in a clearing above a jungle-covered gorge beside the River Ayung – COMO Shambhala Estate remains unmatched, major player on the world’s wellness scene for its effortless approach to wellbeing. Architect Cheong Yew Kuan worked with interior designer Koichiro Ikebuchi to create the estate, combining local stone, wood and traditional alang-alang roofing to build sophisticated spaces that are at once contemporary and thoroughly traditional. 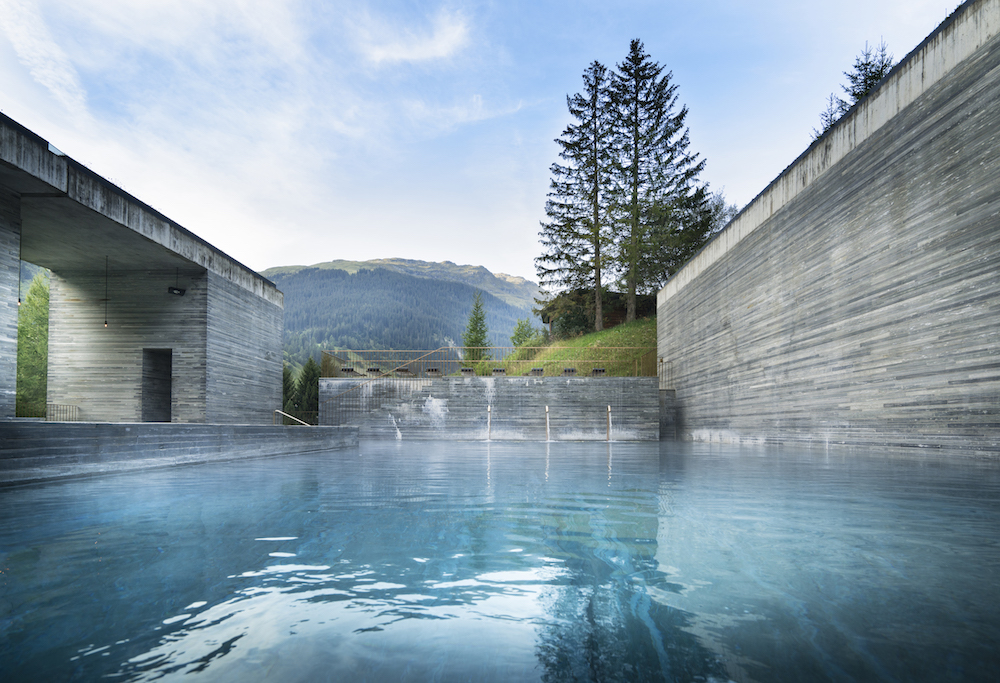 7132 Hotel, a member of Preferred Hotels & Resorts, is described best as a ‘luxury hotel and design hotel wrapped into one’, and was designed by world-famous architects including Tadao Ando, Kengo Kuma, Thom Mayne of Morphosis, and Zumthor. The crown jewel of the hotel is the award-winning thermal spa by Peter Zumthor, constructed from 60,000 slabs of local quartzite. The unique atmosphere and the highly mineralised water that comes out of the St. Peter spring at a pleasant 30° Celsius creates a deeply relaxing and natural experience. 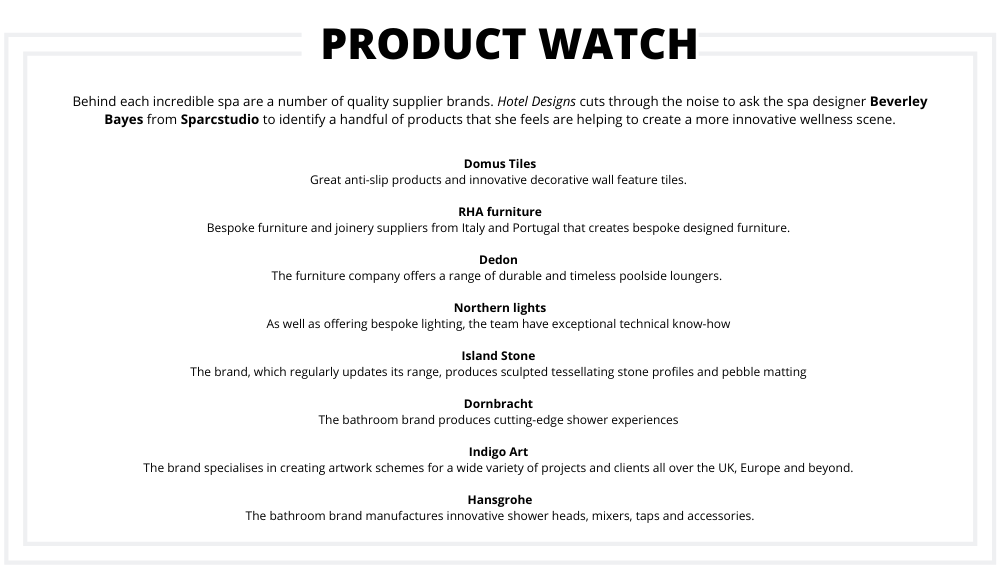 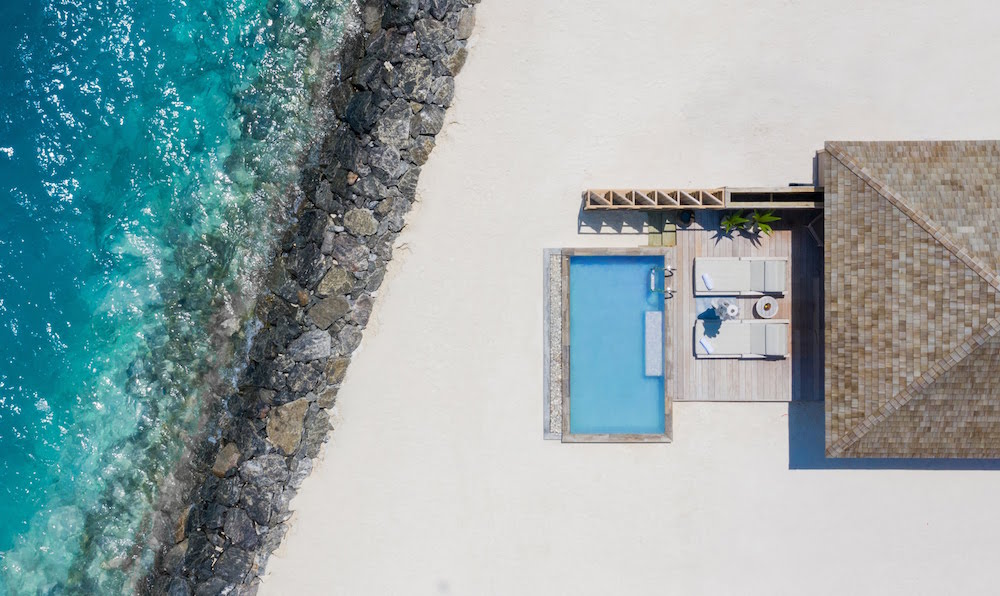 The 1,500-square-metre wellness centre, slated to open in September 2020, is designed by architect Yuji Yamazaki, who was the mastermind behind the world’s first underwater villa. The 50-villa property is said to provide “a 360-degree wellness experience” with a fully-integrated wellness hub that sits at the centre of the island. This area will be complete with an open-air, teardrop-shaped sky roof its core, and will appear to float atop the island’s turquoise lagoon waters. 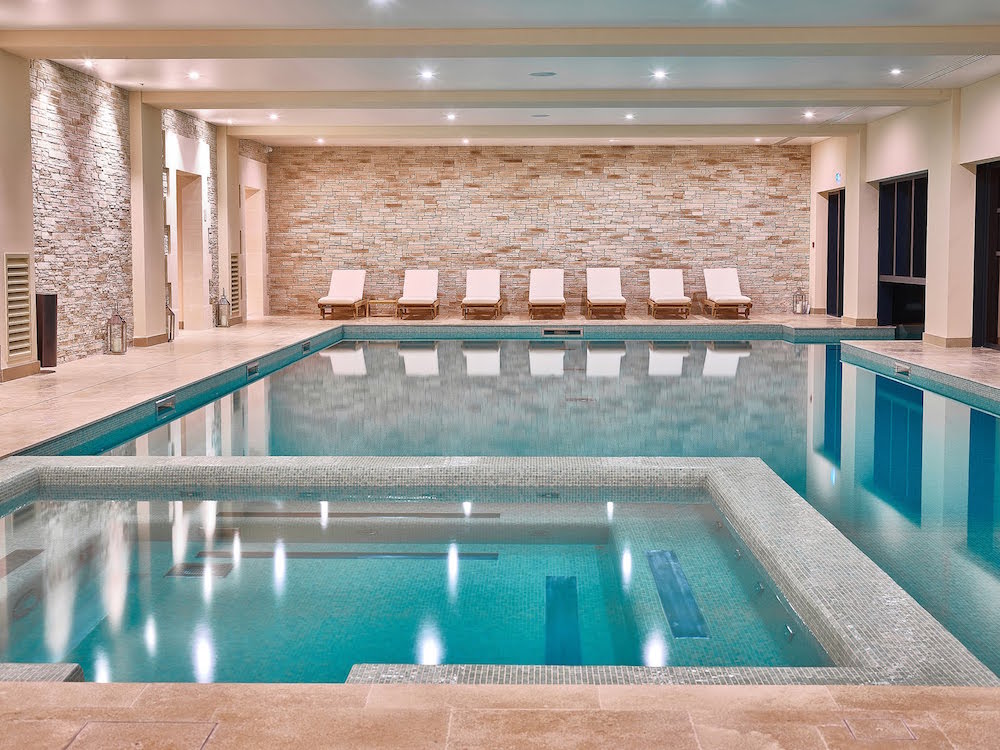 The luxury spa hotel was described as a “modern take on traditional French luxe” when Hotel Designs first caught wind of the project in 2016. In simple terms, an extensive restoration project to convert the wine cellars into a luxury hotel has given the buildings on site a new lease of life. Beneath the guestrooms and suites, the hotel’s spa wellness facilities include an impressive 25-metre indoor and outdoor pool, which allows guests to soak in the natural landscape while enjoying R&R from exploring the city. In addition, the spa also features a modern jacuzzi, a sauna, a handful of massage therapy rooms and a state-of-the-art gym.