INTERACTIVE REVIEW: Oddfellows On The Park 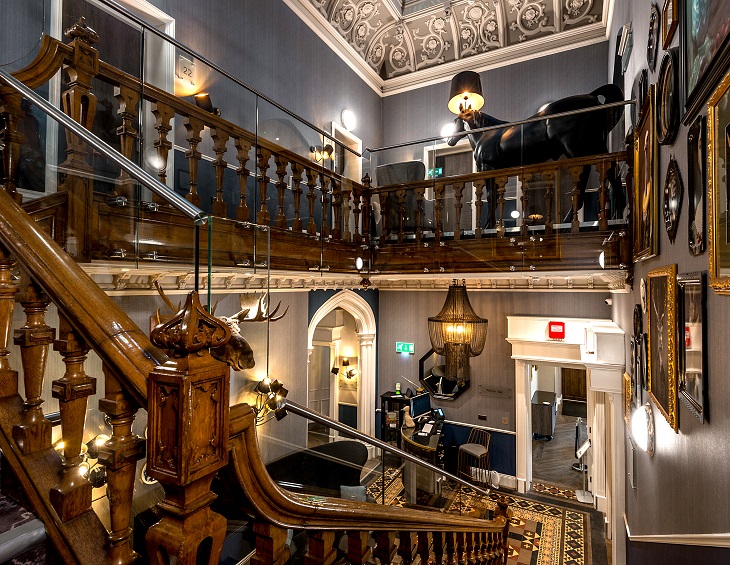 Located on the fringes of Manchester, Oddfellows On The Park is quirky, timeless and in its own admission ‘a little bit odd’. Editor Hamish Kilburn writes about the hotel that was designed to be disobedient…

By the looks of Manchester’s hotel development pipeline, creativity in British interior design and architecture is not limited to London. Despite Brexit uncertainty, this year alone, 835 new guestrooms will be introduced into the industrial city – with a further 11 more hotels slated to open between 2020 and 2021.

The booming hotel design scene in the northern metropolis has resulted in more interest around the outskirts of the city, and it is here – less than 10 miles from the Manchester’s Piccadilly – where Oddfellows Hotels’ latest property is situated.

A lamp shining from the head of a life-sized model of a horse and a chandelier made from bicycle chains hanging above the check-in desk is the first indication that Oddfellows On The Park doesn’t like to play by the rules. Tasked with the aim to stylishly go against the grain was design firm SpaceInvader, which is dedicated to creating spaces which fulfill their true potential, while unlocking the power to enhance human behaviour.

Opened in 2017, the hotel is sheltered within an 1861 traditional Victorian Gothic building, which was named Bruntwood Hall. The shell of the now 22-key boutique hotel was designed originally by an industrialist, John Douglas, who was inspired by a Scottish home; the original ceilings in The Stud Room Bar are testimony to this with subtle thistle design. Today, the iconic structure stands in plain sight, nestled within endless playing parks which feature archery, a golf course, and even a BMX cycling track – hence the cycling chain chandelier in the lobby. 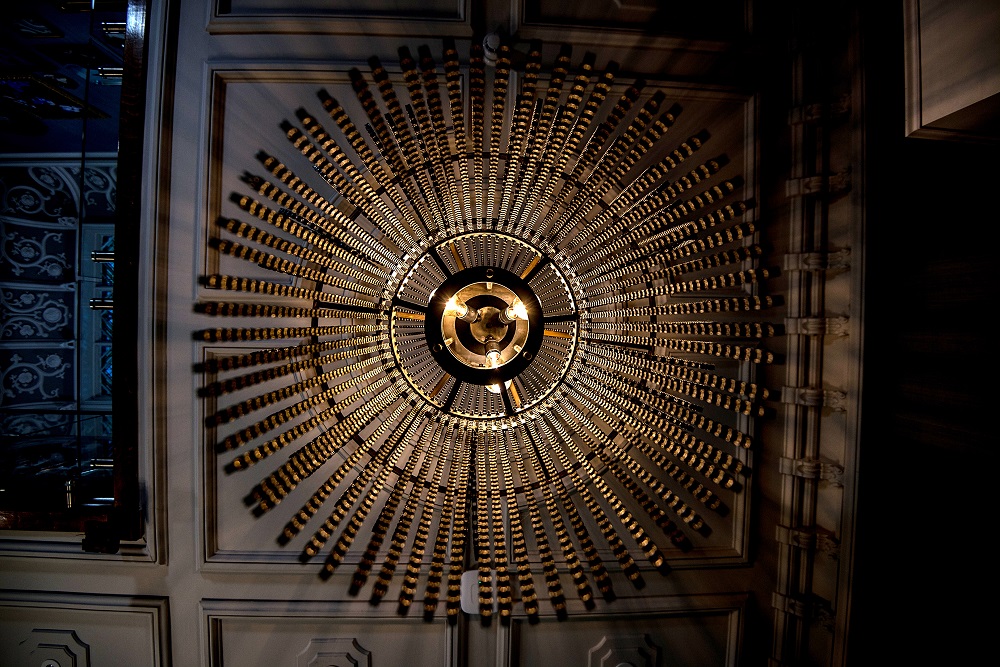 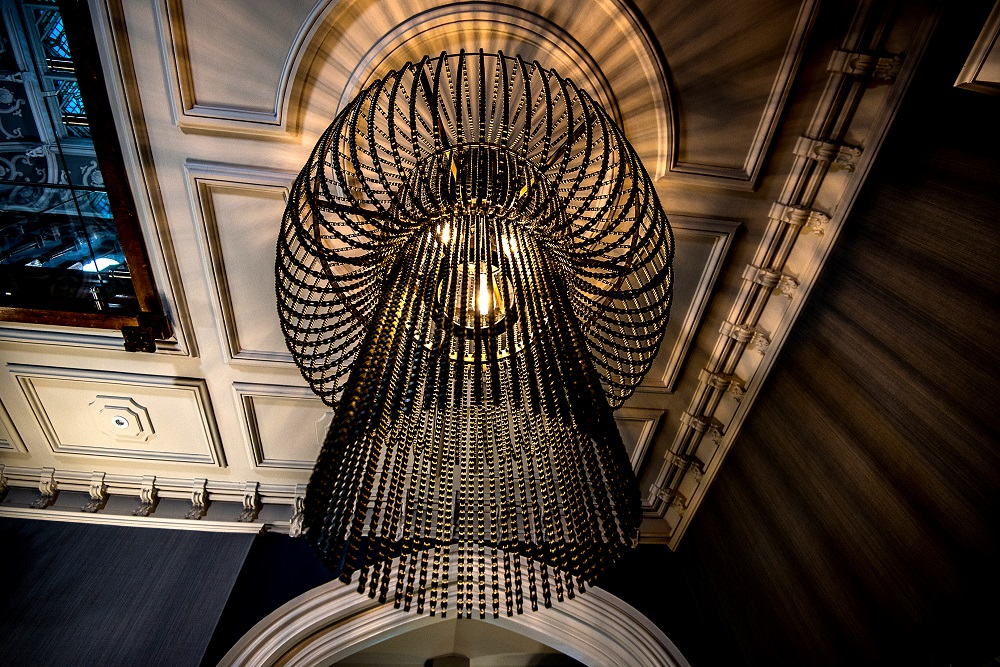 In its history, Bruntwood Hall has served many purposes – from being a town hall during the war to becoming home to a film company and fashion designer. Now, though, for the first time in its winding narrative, the building has been redecorated, reconfigured and reborn to welcome guests into a luxury boutique hotel like no other.

Katie Edgar who heads up hospitality at SpaceInvaders led the design throughout the project. She and her design team conducted thorough research into the history of the building, the location and the inhabitants of Bruntwood Hall, in order to understand how to thoughtfully reference the building’s past. “The approach focused on respecting the character and beautiful features of Bruntwood Hall,” explains Edger. “We were inspired by them, and wanted to enhance them to design a romantic scheme that celebrates the history of the building and its unique position.” 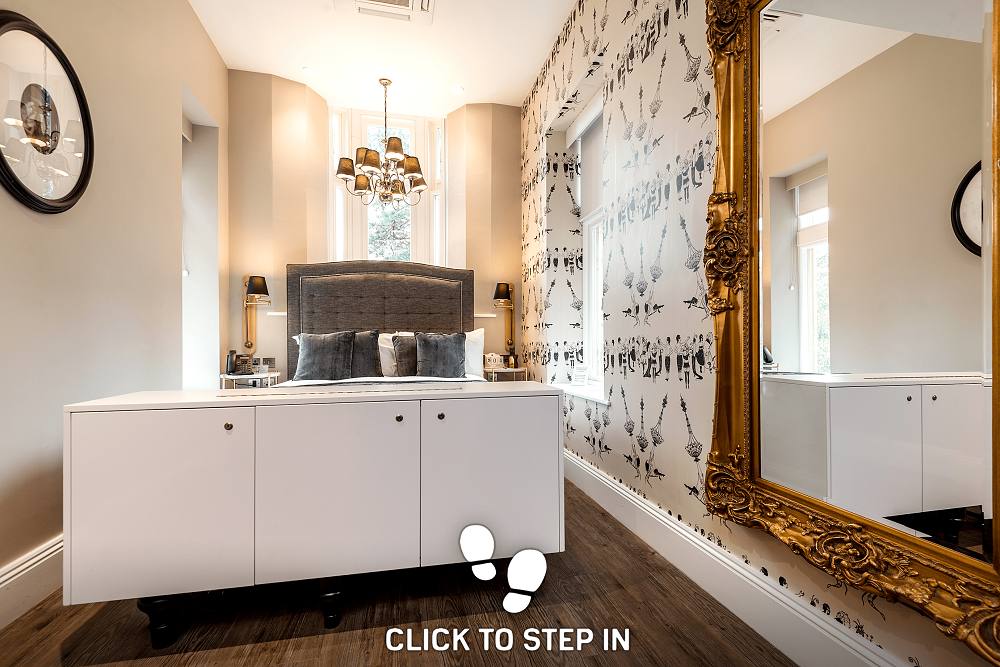 In addition to sympathetically restoring the building’s original features, the design firm worked with architect Tim Groom, in order to incorporate elements of innovative and playful design that has become a signature of Oddfellows Hotels. “The aim was to create a space that allows guests to lose themselves in their surroundings and feel that the Hall is theirs for the weekend,” adds Edgar.

“Original 1860s encaustic floor tiles were uncovered in the reception area and revived to their former glory.”

The public areas arguably give the most significant nod to the building’s heritage. While Edgar and her team were restoring the building as part of its transformation, original 1860s encaustic floor tiles were uncovered in the reception area and revived to their former glory.

The Stud Bar, which is sheltered adjacent to the lobby area, is a small and intimate space dominated by the original statement ceiling complete with beautiful Jacobean-style decorative plasterwork. “The furniture here has been based around complementing, rather than competing with the overhead design,” said Edger. Comfortable high back chairs with fabrics supplied by Skopos and a soft approach to seating encourage guests to enjoy both the view out to the parkland and the historical building features.

Meanwhile, the corridors that are staggered over three levels feature an array of abstract art, creating fun and creative moments throughout guests’ journey to their rooms and suites. Just like the corridors, the guestrooms and suites are layered with texture and each have their own personality. The Tower Suite, for example, is a two-tiered design gem that adorns contemporary finishes such as playful wallcoverings and portraits hung with human bodies and animal heads.

The bathrooms in all 22 rooms and suites have been designed by Utopia Projects, which specified all of the sanitaryware for seven different room types and the spa facilities for the hotel. “Having worked with these designers before, and therefore having an idea of what they like, made this hotel a dream to spec,” said project consultant, Stuart Adamson. ” It’s truly genius how the designers have maintained the buildings country style but modernised it with complimentary elements like the hexagonal mirrors and tiles, although our favourite piece has to be the roll-topped, freestanding baths we supplied completely in white.” 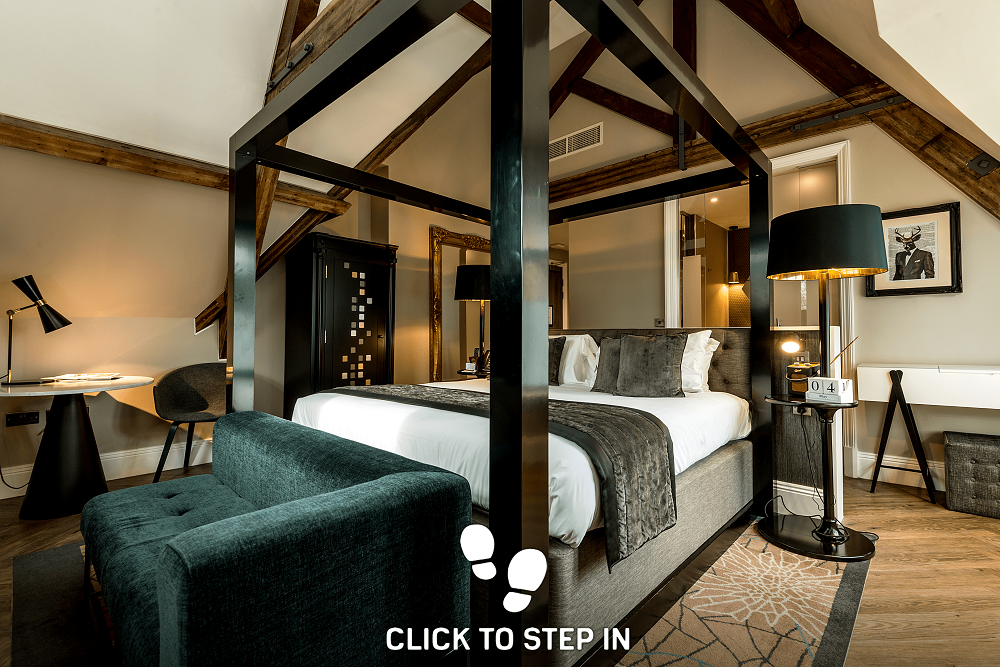 On the top floor, the suites compliment the natural architecture of the building, featuring wooden beams and, with high ceilings, compliment natural arch shape of the roofing. The guestrooms feature over-scaled carpet designs, which are a stylish riff on the decorative plasterwork.

In a nod to the building’s Scottish heritage, the design team included thoughtful elements throughout, including new tartan upholstery, wools and tweeds, and original decorative thistles that are on display. “Heritage colours were specifically chosen to accent walls throughout the bedrooms and public spaces,” explains Edger. “Muted shades of greens, blues, purples and blacks were considered room by room and provide a back drop to conversational artwork and decorative lighting.”

The use of taxidermy would have been expected in the interior of the building’s previous iterations. And so to layer this sensitively within interior scheme was important, but as with everything in the hotel’s design, the use of taxidermy was anything by ordinary. “In a twist on this concept, we included elements such as bike handlebars mounted on elaborate wall plates,” explains Edger. “These have been utilised to provide another link to the activities that can be enjoyed within the building’s surrounding 100 acres of parkland.” 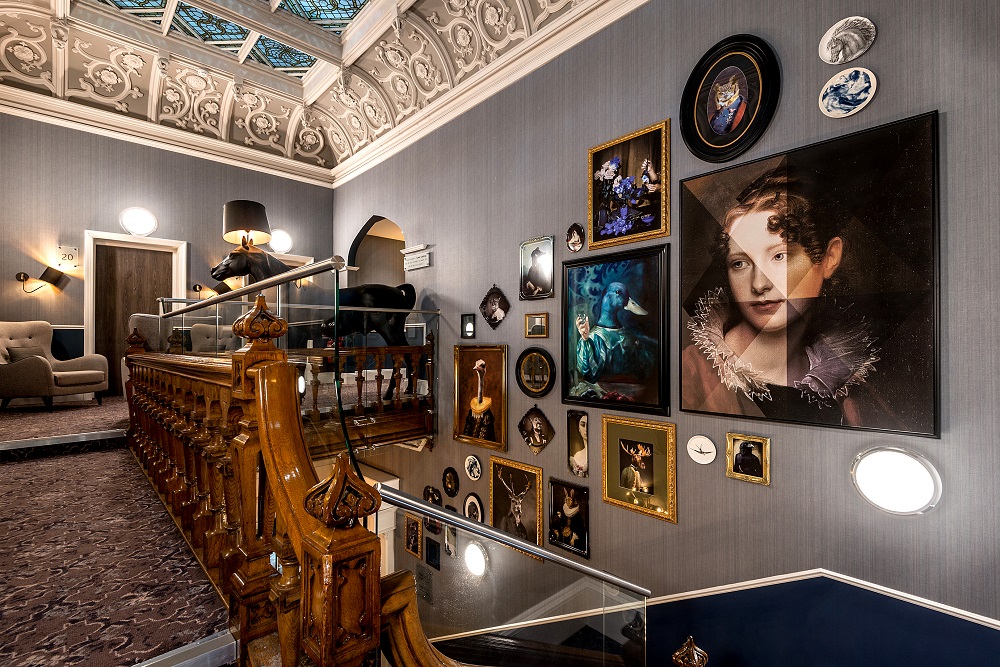 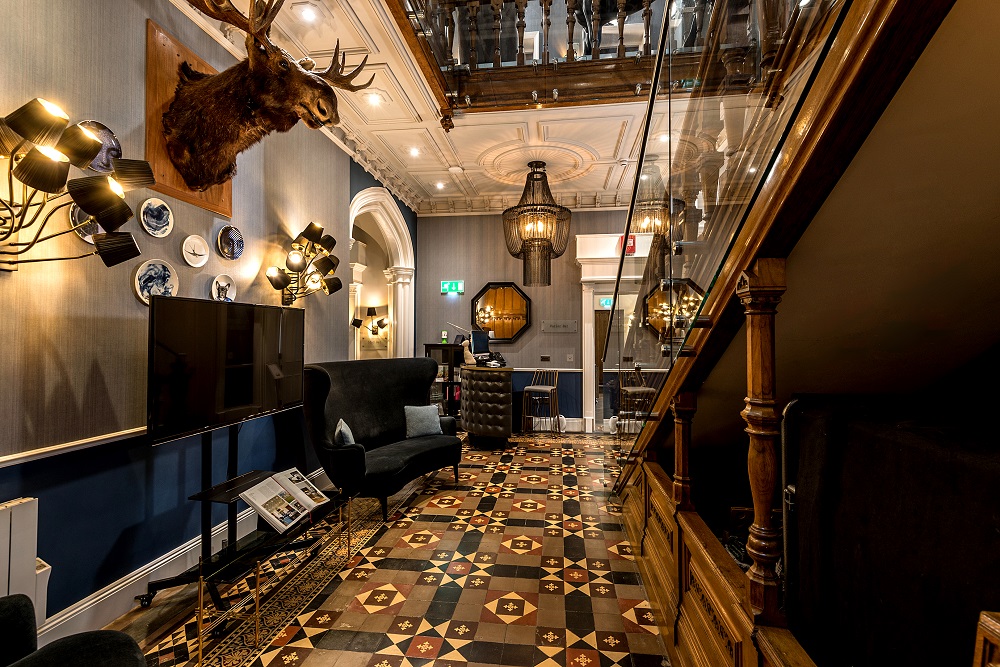 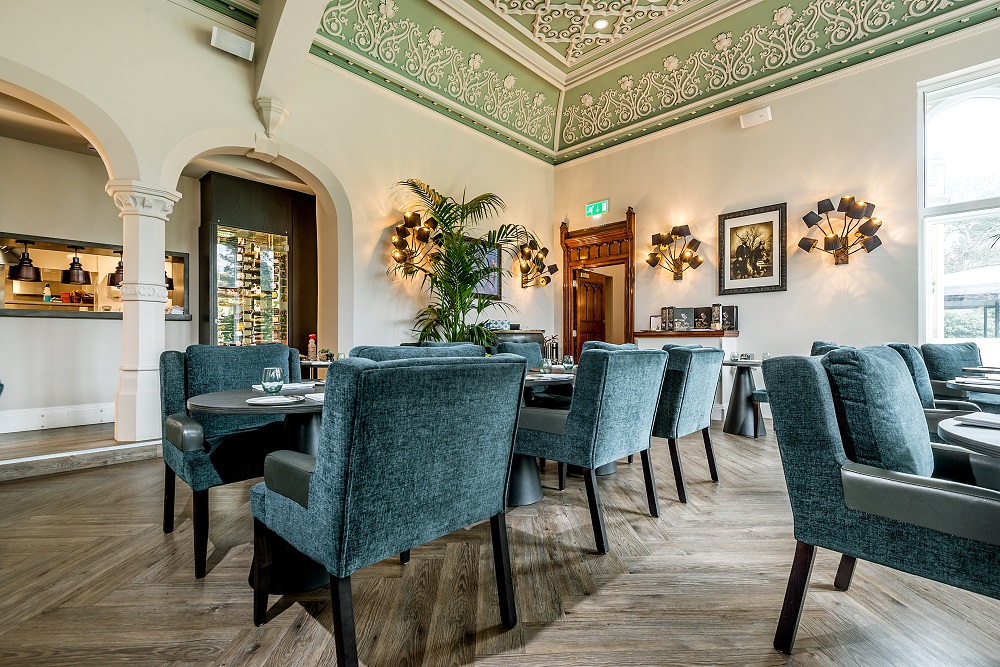 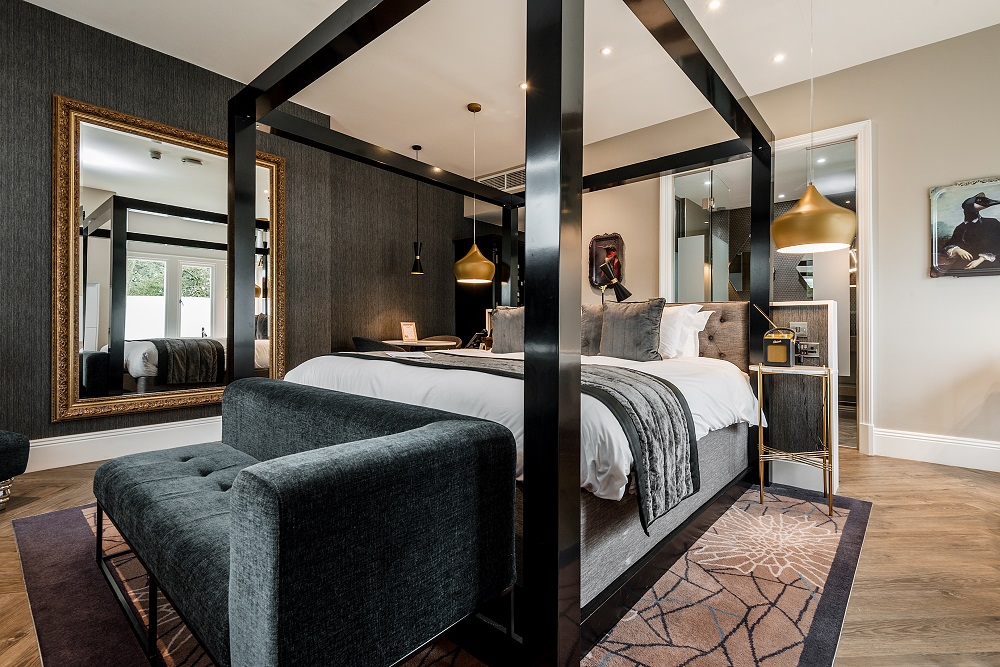 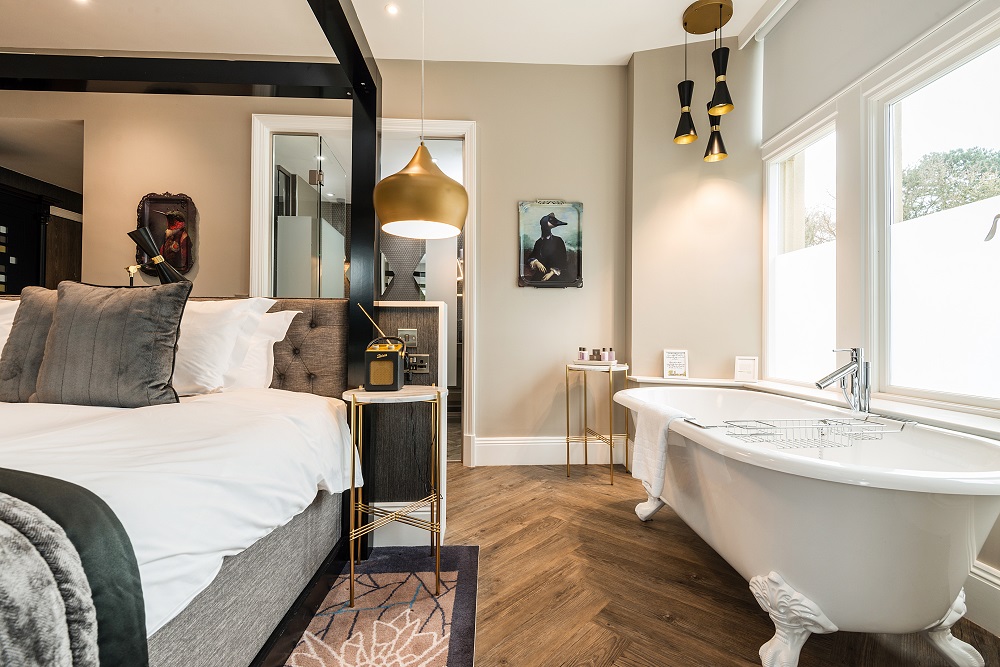 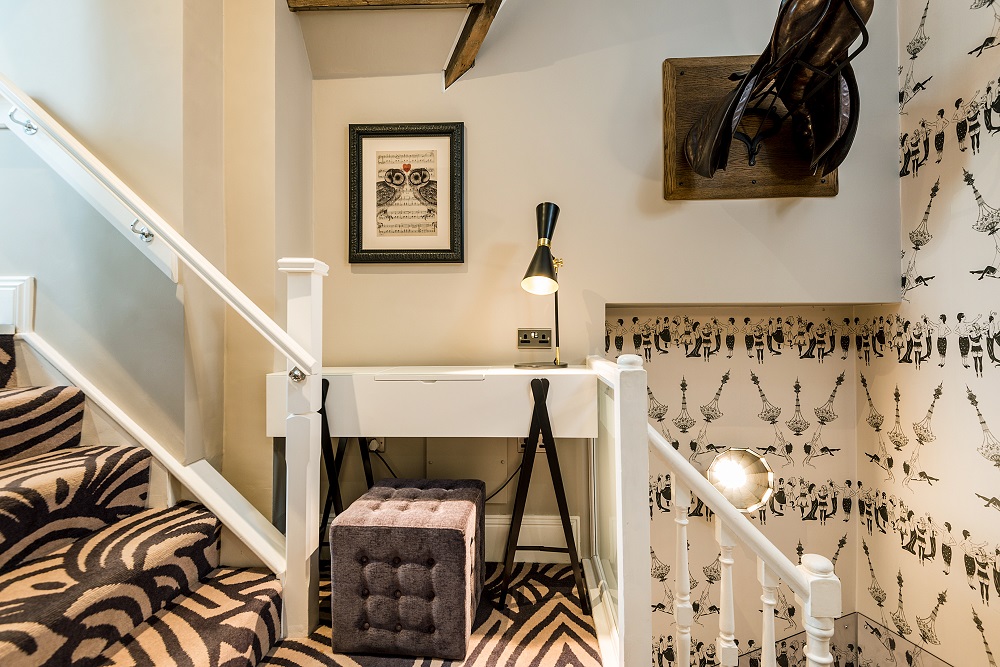 The Pigsty is the hotel’s premium spa that sits in a separate building adjacent to the rest of the hotel. Fittingly, the intimate salon features its own mudroom as well as two treatment rooms and has an engaging atmosphere within the social salon quarter.

Now managed by Bespoke Hotels, the UK’s largest independent hotel group that also owns Hotel Gotham, checking in to Oddfellows On The Park is a journey that celebrates oddities in spectacular fashion. With the combination of amplifying a unique style and through clever marketing to promote it, the Oddfellows Brand is taking its place in the northern hotel charts and it continues to push the boundaries of modern hotel design.