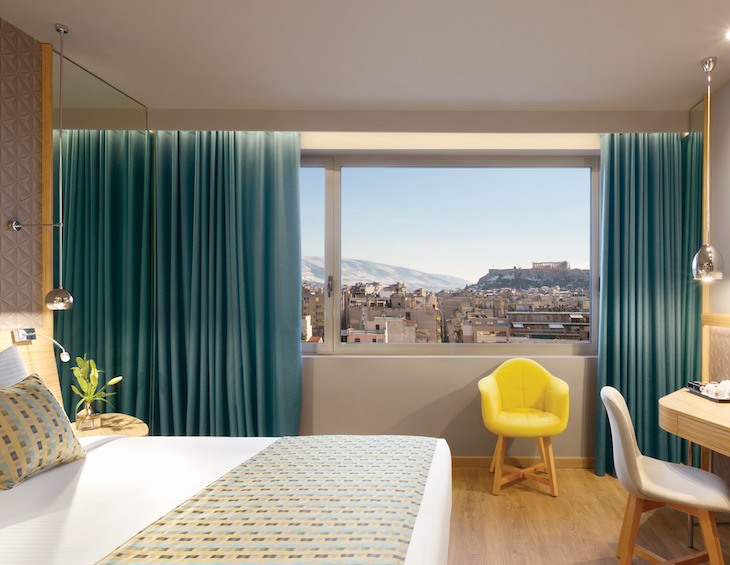 With unparalleled views casting over the ancient city below, Wyndham Grand Athens opened in 2017 to capture the city from a unique perspective. Editor Hamish Kilburn checks in two years later to explore just how timeless the interiors really are…

It seems to me that Greece – and Athens in particular – is a magnet this year for influencers – my Instagram feed for starters is bursting at the seams with the hashtag #VisitGreece. And so, like all consumers, slaves to the travel trends, I felt obliged to check in on the action to discover hotel design Greek style.

Despite the destination’s pockets of derelict and forgotten-in-time in places, Athens’ authentic charm amplifies through the streets and outwards towards the barefoot-luxury islands. And with a recent report published by GBR Consulting revealing that at least 40 new accommodation units (hotels and room-to-let properties) arrived in the city in the first half of this year, it seems as if my social media is, after all, an accurate tool for measuring travel hotspots.

With the vast number of archaeological sites dotted around – and the 5th Century BC landmarks – I would argue that a good place to start is up high, soaking in the establishing shot from a rooftop bar, which features panoramic views stretching from the ancient acropolis right through to the port of Piraeus. Luckily for me, and after the recommendation from the hotel group’s President and Managing Director, Wyndham Grand Athens offers all of this and more.

The hotel, which is the hotel group’s first property in Greece, is situated on Karaiskaki Place, an area that was once seen as an area to avoid for tourists. However, following a stream of newly opened art galleries, modern coffee shops and restaurants, it became one of the destination’s most up-and-coming neighborhoods – a reputation that Wyndham Hotels only strengthened when it arrived in 2017.

Upon entering, guests are welcomed into a neutral yet inviting lobby, which leads up to FOS Restaurant on the ground floor. The interiors inside FOS, which is the Greek for ‘light’, create an appropriate scene. The contemporary F&B scene sits under a large chandelier that is suspended from an expansive floor-to-ceiling atrium. 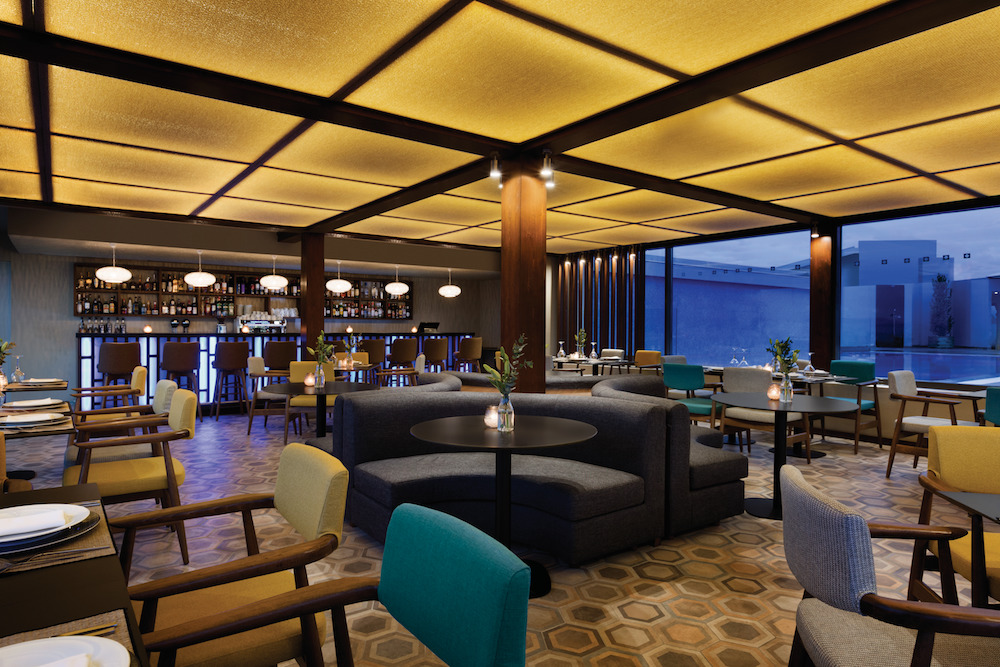 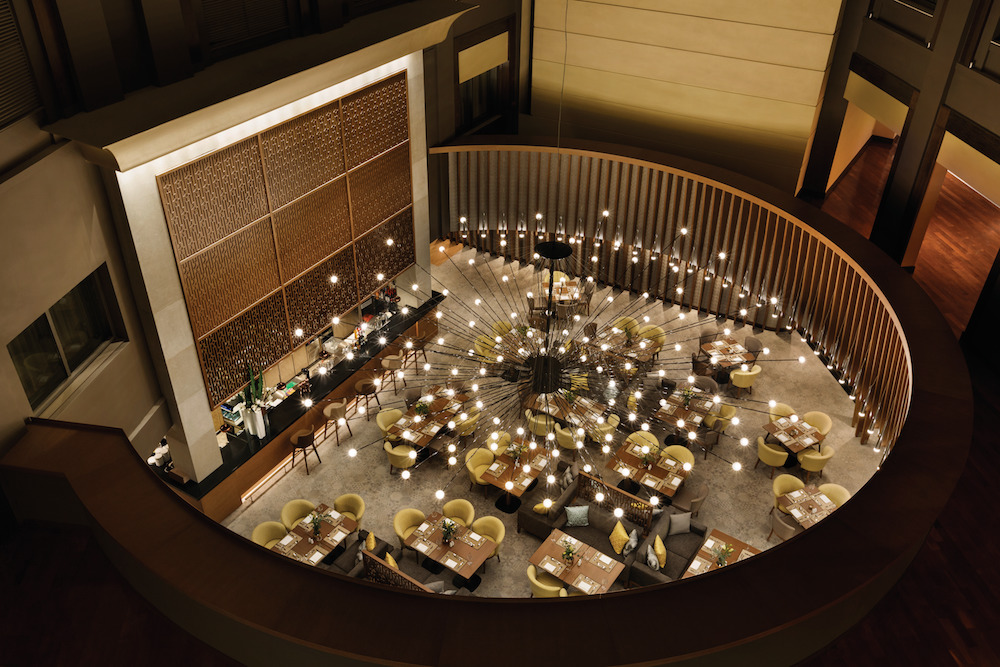 From one unforgettable public area to another, located on the rooftop of the hotel is the Above Bar and Restaurant. Complete with unobstructed views over the acropolis, making it one of the best roof-top restaurants in the city, this area is quirky and relaxed. Blue, mustard, grey and black contemporary Enka furniture confidently contrast the geometric flooring, creating a strong mise en scéne for any scenario.

Adjacent to the subdued design-led restaurant and bar is a modest pool, which also captures the same Insta-worthy panoramic views over the city.

The majority of the 249 guestrooms and 27 suites include views over the city and the Acropolis or Lycabettus Hill. The interiors feature soft silvery-toned wallpaper with accents of colour in the furniture and soft furnishings and some include windows that wrap around the room, adding further natural light in. 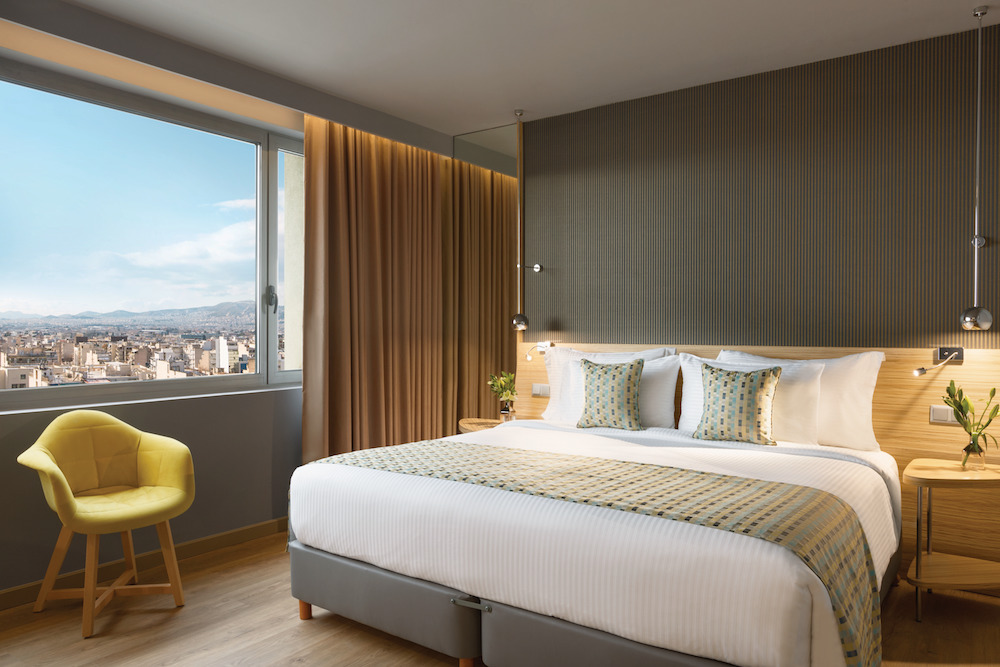 The stripped-back modern décor of the guestrooms and suites continues in the marble bathrooms. The yellow glow in the suites’ furniture becomes a motif as it is also echoed on the soft reflective surface behind the wide bathroom mirror, creating an ambiance of subtle contemporary luxury.

Although Wyndham Grand Athens is not the latest hotel to emerge on the hotel design scene recently, it is certainly a strong example of how a design-led hotel can significantly lift a destination to become a major go-to travel hotspot.