To mark the change of focus of Hotel Designs’ editorial lens, editor Hamish Kilburn goes on a journey to discover some of the world’s most unconventional hotel lobbies and public spaces…

From striking rooftop bars above bustling metropolises to home-from-home hot-desk sanctuaries, the design of hotel public areas have evolved to capture not only a property’s rare personality but also a brand’s ethos and character.

While luxury hotel etiquette and demand has changed, one thing has remained firm for the operators and designers alike: you only have one opportunity to make a lasting first impression, which is arguably most true when it comes to designing the hotel lobby and public spaces. It’s a fine balancing skill to master. Designing a space suitable and accessible for everyone, but creating skilfully and meaningfully designing public spaces that add drama in all the right areas without coming across too strong can take a well-designed hotel into the realms of extraordinary masterpieces.

To kickstart Hotel Designs firmly positioning Public Areas under the editorial spotlight this month, here are nine uniquely designed lobbies and public spaces that each aptly amplify a hotel’s purpose and charm. 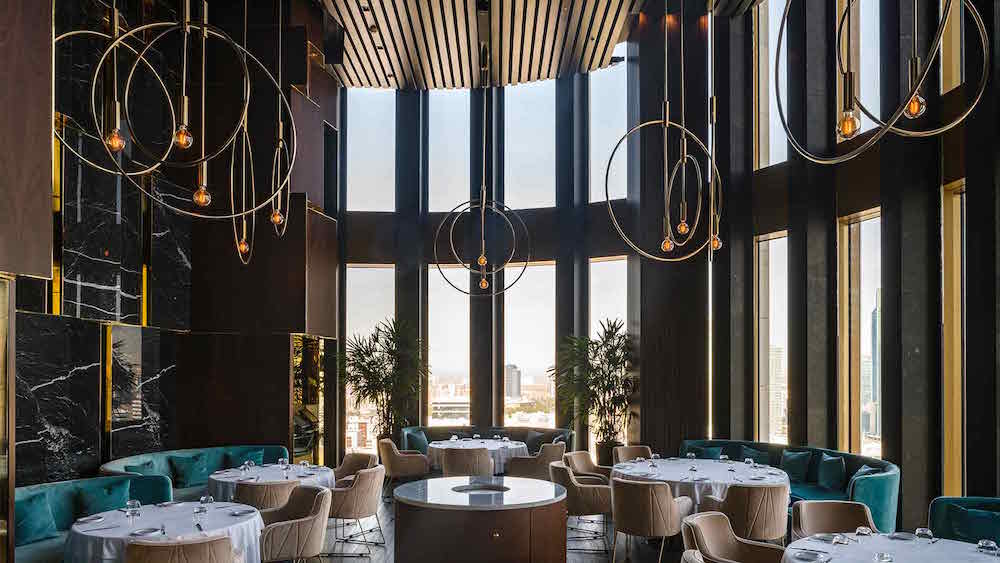 With a unique yet graceful design, The Ritz-Carlton – Astana is a natural extension of the square around the nearby Bayterek Tower, a monument and symbol of modern Astana. The property features an architectural lighting scheme designed by Nulty Lighting with carefully positioned luminaires in the soffit, which graze light across the fins for a dappled effect. In the restaurant, surface-mounted spotlights nestle within a bronze trough that cuts through an otherwise architecturally clean ceiling, complemented by a suspended rail with adjustable spotlights, which drops from the same detailing to provide a focus along the continuous marble counter, drawing the eye through the space. 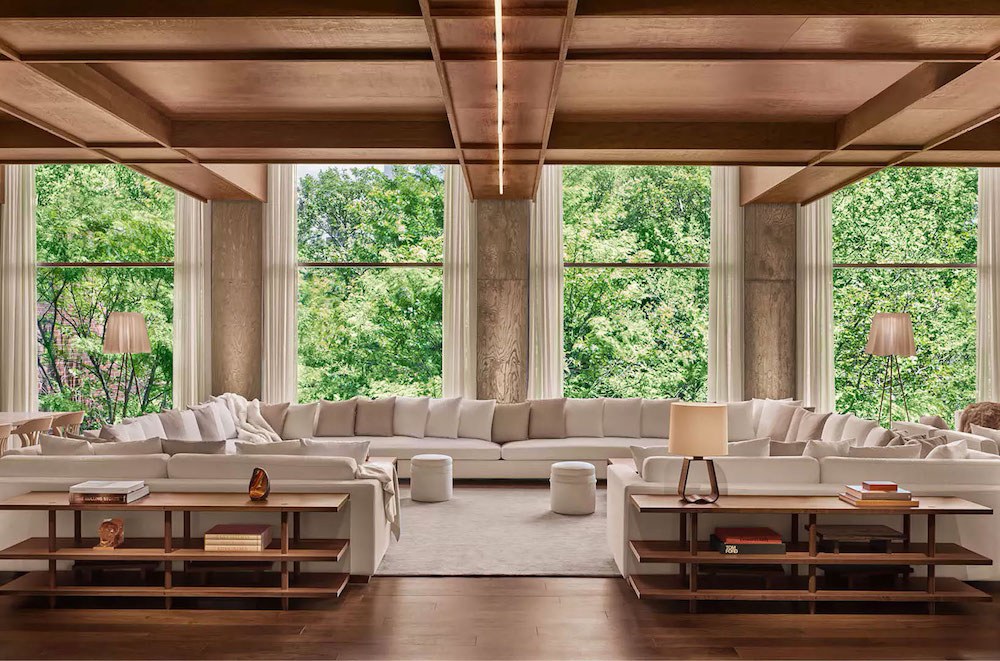 Featuring what our editorial team are unofficially concluding as the largest sofa in the world, PUBLIC, designed by legendary designer Ian Schrager, has all the necessary ingredients of a successful urban retreat. The New York-based hotel is known for being refined, sophisticated, smart, simple, yet flamboyant and provocative all at the same time. Its public areas, complete with high ceilings and modern comfortable furniture, attract locals and guests alike to work, socialise and simply chill out in a comfortable setting. 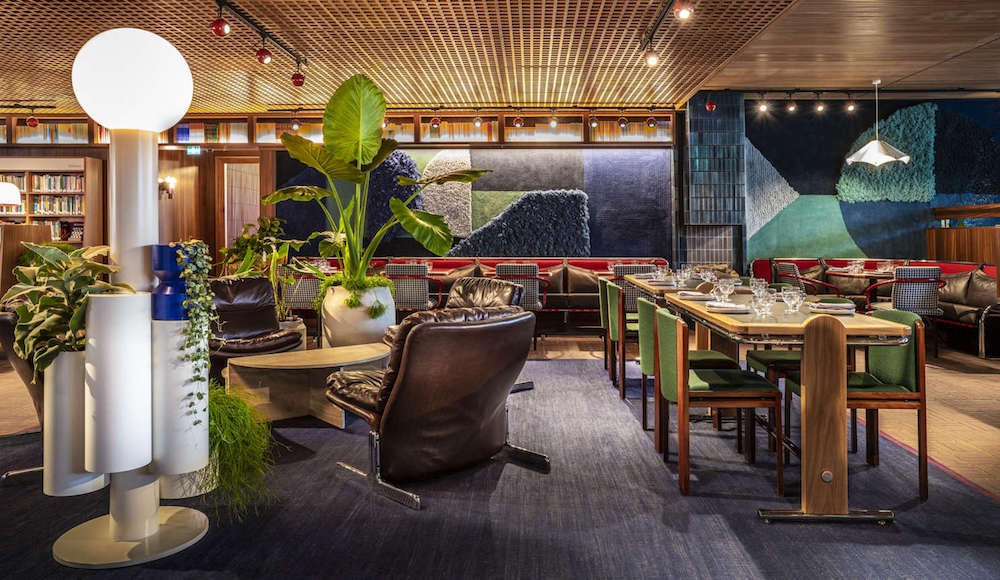 The ground floor inside The Standard London was inspired by the groovy 70s, a decade full of character with Psychedelic Furs (the early years), Deep Purple and Led Zeppelin and the debut of The Muppets and Star Wars capturing the movement.

The Standard London’s lobby/lounge features fabulous circular fixtures and quirky furniture that set the scene. The carefully curated library pays homage to the building’s original use. Look down and you’ll notice a sumptuous orange rug leading the way into the hotel, look up and the bright red ceiling offsets the striped wooden walls and the blue mural behind the reception – forcing you to take everything you thought you knew about maximalism and throwing it out the window. The muted lamps and pot plants only enhance the boldness of the lobby’s design. 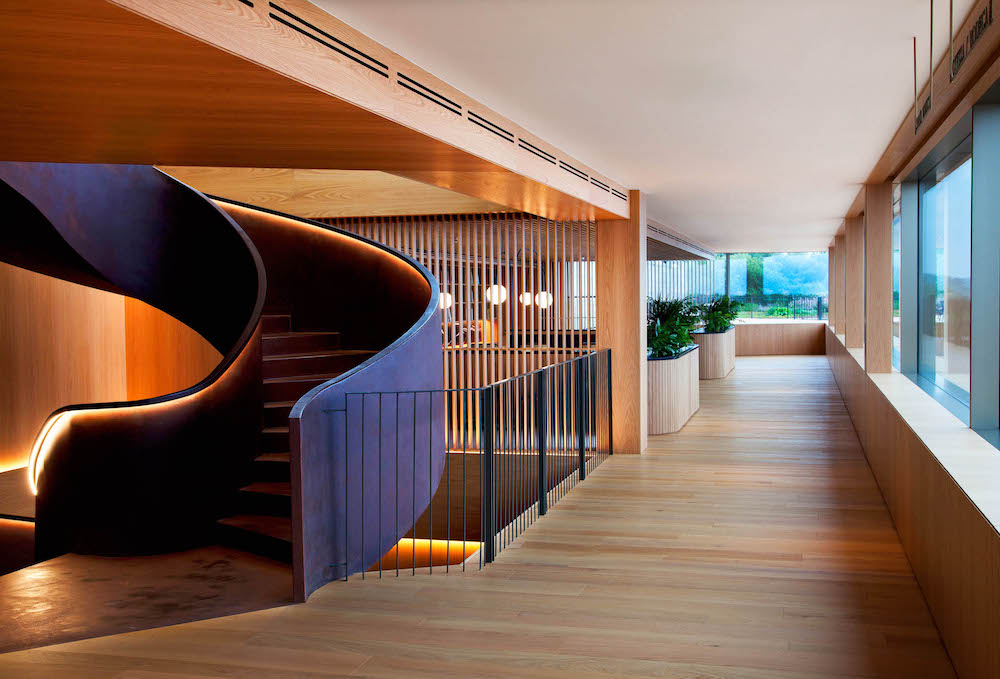 Architecture studio Mecanismo was responsible for the construction and interior design of AKELARRE Hotel. The carefully and meaningfully designed public areas evoke a sense of calm with a clever use of curves. The design concept was to use elements that coexist in harmony with the surrounding environment, to connect the interiors with the striking views of landscape that surrounds.

The Murray Hotel was a preservation project undertaken by Foster + Partners, the brief being to design a 336-key luxury hotel within the shell of one of the city’s most iconic landmarks that was built in 1969. 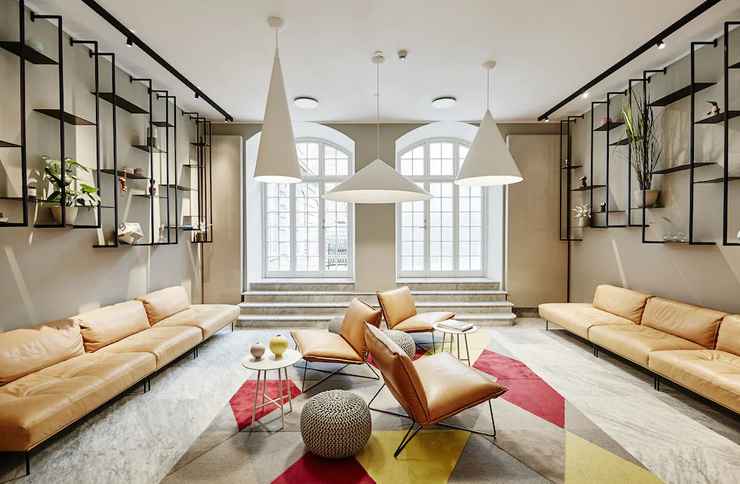 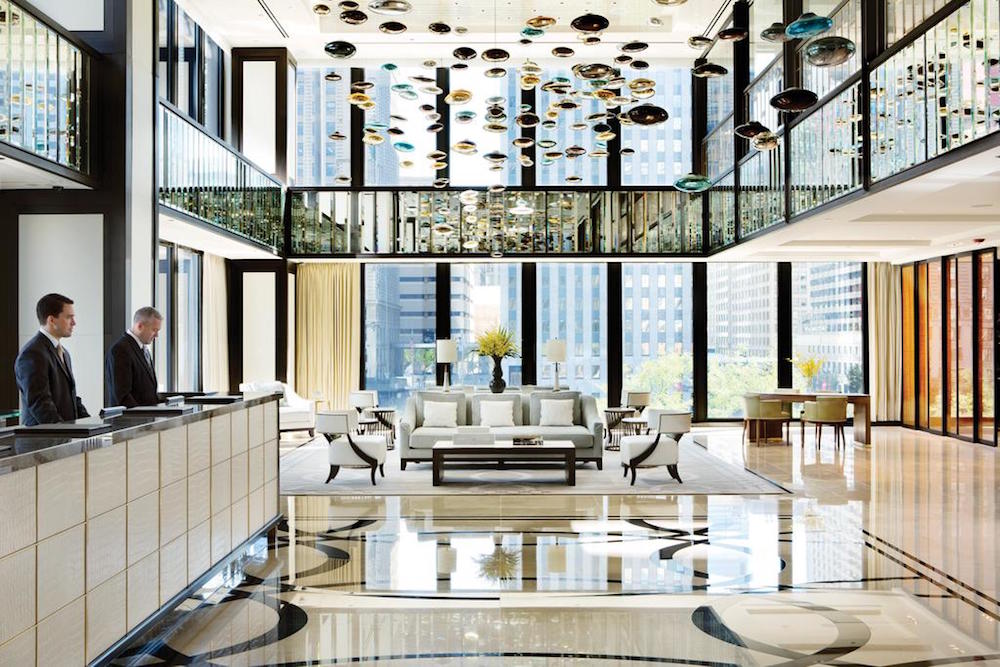 The Langham Chicago, designed by Richmond International, is part of the former IBM tower, the final masterpiece of architect Mies Van Der Rohe and a well-loved feature of Chicago’s skyline, which the design team respected while creating a new, luxurious hotel inside its magnificent shell.

The designers opened up the reception with double-height spaces and introduced views of the city and the Chicago River. Materials such as bronze and travertine reference the original building, while decorative elements including onyx and velvet were inspired by the architect’s residences. The result is a warm, elegant hotel that honours its past. 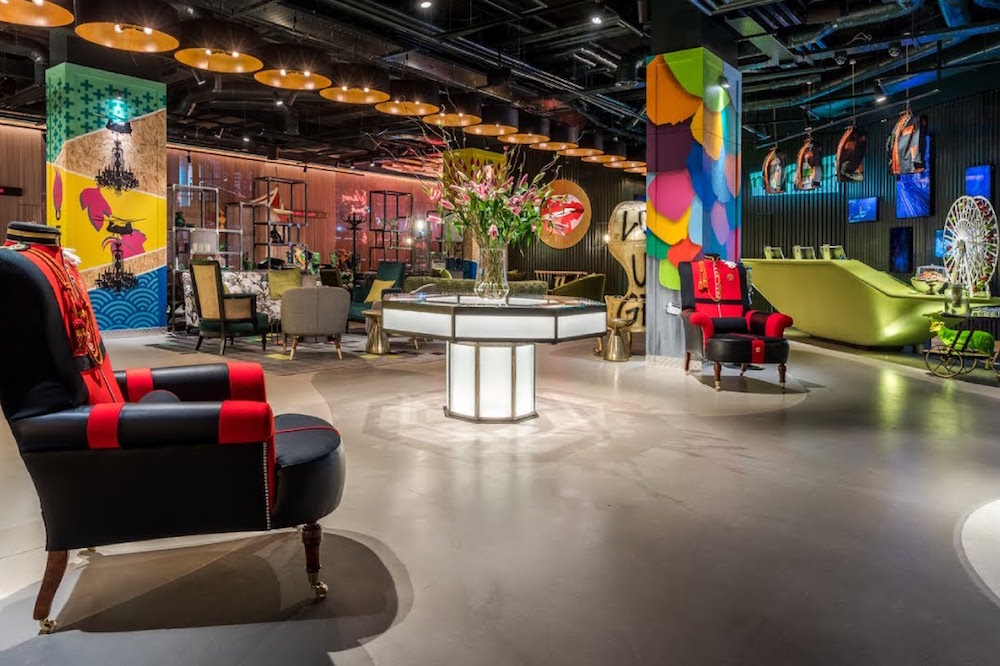 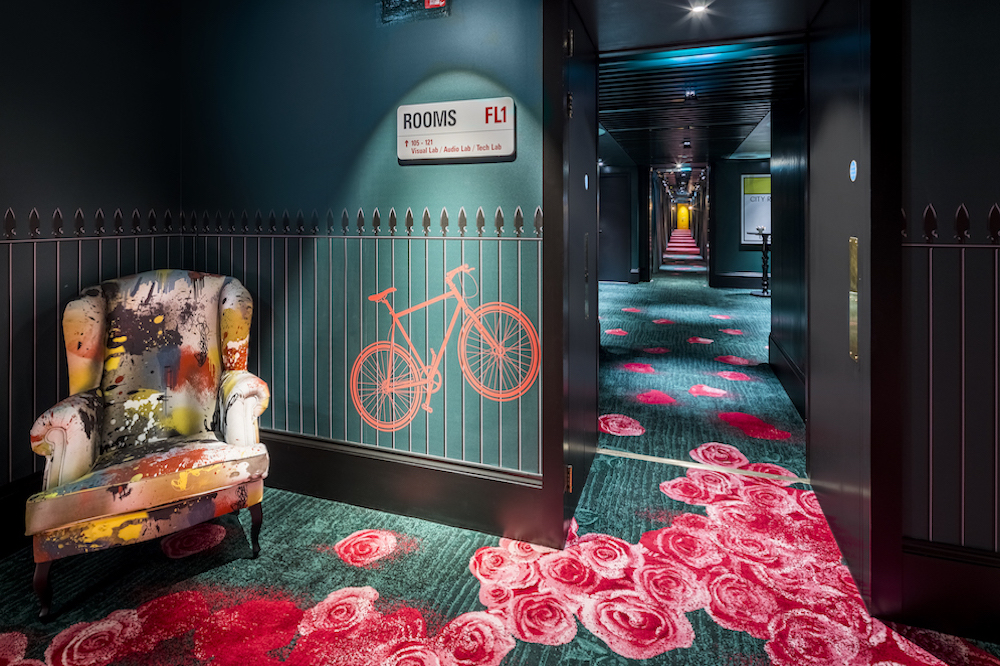 ‘London Reloaded’ was the interior design concept for nhow London. The design studio Project Orange stretched that broad theme to its limits when imagining the look and feel of the the lobby inside the 190-key hotel. Although the arrival experience is impressive and memorable, we believe that the corridors, which often become ‘dead spaces’ are a true reflection of the studio’s ability to uniquely narrate a story with interiors. Inspired by a London stroll in the park, the corridors feature detailed HD carpets by Brintons and has been brought to life with humour. Each floor, facing the lifts, features a stencil of a bike chained to a fence. As guests move up each levels of the hotel, another part of the bike is removed, which is a playful nod to the reality of most, if not all, for cyclists in the city. 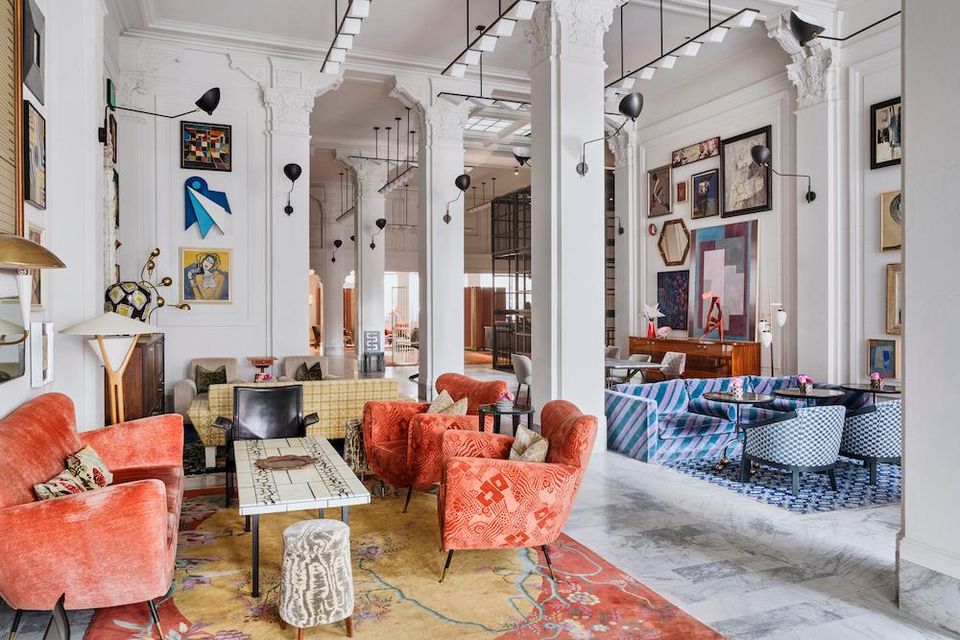 The flagship property of Proper Hotels is nestled in a landmarked flatiron-style building in San Francisco’s vibrant Mid-Market district., and features captivating interiors by designer Kelly Wearstler. The designer’s luxury residential style is arguably most felt in the lobby, which has been created using a clash of patterns, colours and textures alongside European furniture pieces from a number of design movements in history.