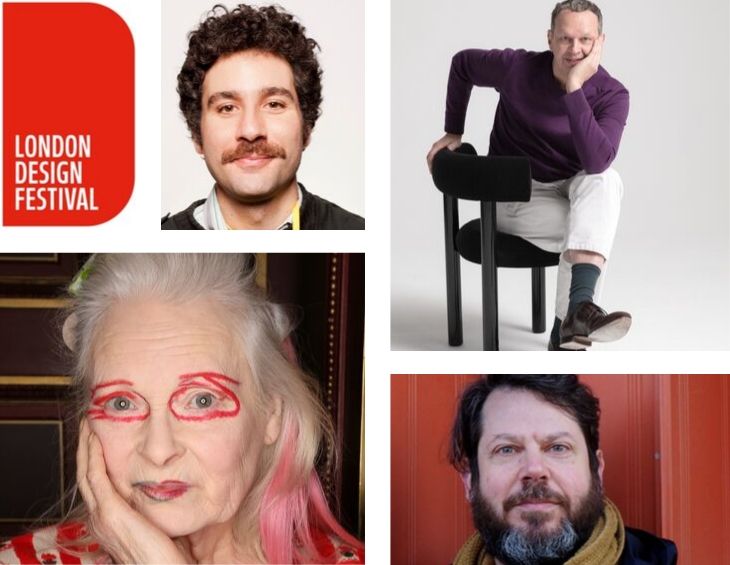 Launched with the aim to recognise the contribution made by the leading design figures and emerging talents in London and the industry, London Design Festival historically kicks-off the week-long design event by presenting four London Design Medals awarded.

The 2019 medals were presented yesterday at The House of Commons, Westminster, while the capital came to life for the start of this year’s design spectacular.

And the winners are…

“Each year the jury selects four eminent people who have made a major contribution to design in the UK,” said Ben Evans CBE, London Design Festival Director. “This year the winners are as interesting and deserving as ever.”

The London Design Medal, supported by British Airways London City, is the highest accolade bestowed upon an individual who has distinguished themselves within the industry and demonstrated consistent design excellence.

This year’s winner, Tom Dixon, rose to prominence in the mid 1980s as a self-taught British designer. He set up the creative think-tank space, which acted as a shop front for himself and other young designers. By the late 1980s, he was working for Cappellini, for which he designed the iconic S chair. In the late 1990s, Dixon became Creative Director at Habitat and was responsible for rejuvenating the brand while maintaining Terence Conran’s vision of enriching everyday life through simple, modern design.

His works have been acquired by museums across the globe, including the V&A, MoMA and the Pompidou Centre. In 2002 Dixon established his own eponymous brand with own stores in New York, Hong Kong, London, Los Angeles, Milan and Tokyo. More than 600 products are created by the company, ranging from lighting to furniture, from tableware through to fragrance, and are distributed to over 90 countries.

In 2007 Dixon launched Design Research Studio, an interior and architectural design studio. High‑profile projects include the Restaurant at the Royal Academy, Shoreditch House, le Drugstore in Paris and Alto in Hong Kong. In 2018, Dixon opened the Coal Office, his new London Headquarters, in King’s Cross. Created by Design Research Studio, the Coal Office functions as a multi-displinary hub, including an office, restaurant, design studio and shop all under one roof.

“I’m still confused as to why I won’t be getting the ‘Emerging Design Medal’,” said Dixon on the news of his win, “as it still feels very much like I have only just started – I’ve so much left to design! But I’m very touched to be noticed by this super Jury, thank you very much.”

Design Innovation Medal, supported by SAP, celebrates entrepreneurship in all its forms, both locally and internationally. It honours an individual for whom design lies at the core of their development and success.

Daniel Charny is a creative director, curator and educator with an inquiring mind and an entrepreneurial streak. He is co-founder of the creative consultancy From Now On, where clients include Dartington Hall, the Design Museum, Google, Heatherwick Studio, Nesta and U+I. His most recent initiative is the creative education think-and-do-tank FixEd.

Charny is best known as curator of the influential exhibition Power of Making at the V&A, which drove him to found the award-winning learning programme Fixperts, now taught in universities and schools worldwide. Other projects include the Aram Gallery, the British Council’s Maker Library Network and the Central Research Laboratory accelerator. As Professor of Design at Kingston University he is interested in the roles of design and making for social benefit.

Charny is active internationally as a speaker and expert advisor, advocating his vision of design, creativity and making as essential tools to unlock a better future.

“Engagement, education and access to design are all critical to assuring the creative responses to a changing world that we all need,” said Daniel Charny. “I’m proud to represent this idea and delighted to be recognised for it in London, a city of unparalleled creativity.”

Emerging Design Medal supported by Storey, recognises an impact made on the design scene within five or so years of graduation.

Ross Atkin is a designer and engineer based in east London. His work focuses on two areas: helping disabled people to live more independently, and introducing design and engineering to children.

He maintains his own design and development practice, creating assistive technology and accessibility-focused products that span the digital-physical divide. These include: Sight Line, a system for improving the accessibility of roadworks developed in partnership with The Royal Society for Blind Children and Transport for London; MSE Genie, an app and connected hardware that allows a sensory room to be tailored around the needs and capabilities of the person using it; Responsive Street Furniture, a system created in partnership with Marshalls that enables pieces of urban infrastructure to provide assistance automatically, such as by making street lighting brighter, or by lengthening the duration of road-crossing signals; Smartibot, the world’s first A.I. enabled carboard robot; and LiftCheck, a system that allows lift users to see if the lifts they need to complete their journey are operational before they set off.

Atkin’s design practice is heavily informed by observational research. He regularly conducts participatory shadowing of disabled people as they make journeys around cities.

“I never thought the kind of work that I do would be recognised, so I feel doubly honoured,” said Ross Atkin. “It’s beyond my imagination to be in the company of true legends of design, and it also is an amazing privilege to be representing the world of inclusive design on such a prominent platform as London Design Festival. I look forward to more designers from that world being recognised in the future”.

Lifetime Achievement Medal Winner supported by Fortnum & Mason, honours a significant and fundamental contribution to the design industry over the course of a career.

Vivienne Westwood was born in 1941 and moved to London 17 years later. She began designing in 1971 along with her then partner, Malcolm McLaren. In 1984, she launched her own fashion line and in 2004 the V&A hosted a Vivienne Westwood retrospective to celebrate her 34 years in fashion – the largest exhibition ever devoted to a living British fashion designer.

Westwood has always used her collections and catwalk shows as a platform for activism. She has personally spent many years speaking out about the effects of climate change and over‑consumption – and inaugurated the ‘Climate Revolution’ at the 2012 London Paralympics closing ceremony.

Along with husband and design partner Andreas Kronthaler, Westwood actively supports the charity Cool Earth in its efforts to halt rainforest destruction. She has also campaigned for a number of NGOs and charities including the Environmental Justice Foundation and Friends of the Earth, and is an ambassador for Greenpeace: in 2013 she designed their official ‘Save the Arctic’ logo.

Since 2011 Westwood has worked with the International Trade Centre – a joint body of the UN – to produce accessories through their Ethical Fashion Initiative. The programme currently supports the work of thousands of women from marginalised African communities. Westwood has written her ideas in a manifesto called ‘Active Resistance to Propaganda’, rooted in culture as a stimulus to save the planet, and more recently designed a set of playing cards to set out a global economic strategy to stop climate change.