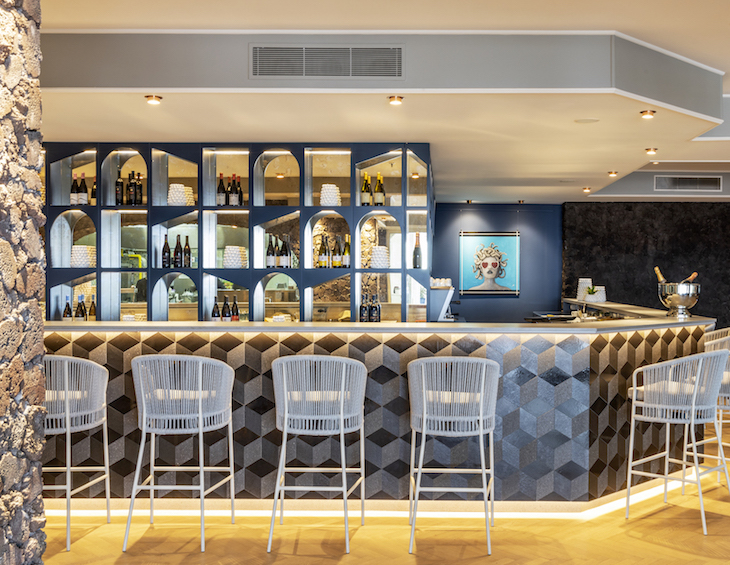 Design studio THDP has completed an extensive renovation inside RG Naxos, set in Giardini Naxos. The new look was inspired by nature to draw out the best of Mediterranean culture…

RG Naxos, located on the shores of Giardini Naxos in Scilly, Italy, emerges following a major interior revamp sheltering a cohesive interior design narrative that sensitively celebrates the destination’s culture to re-establish itself as a modern hospitality masterpiece.

Giardini Naxos, founded in 734 BC by colonists from Chalcis in Euboea, was the first Greek colony in Sicily. Ancient Naxos was destroyed in 403 BC, and the centre that rose in its place in the Middle Ages became a thriving fishermen’s village. In the late 19th century elegant villas were built, used as holiday mansions by the upper classes.

The Greek heritage that remains in Sicily can be seen in the architecture of a few very important buildings, but today it is regarded a popular seaside resort. With its distinct identity and its various cultural and religious events that take place throughout the year, Giardini Naxos is a natural tourism hotspot. 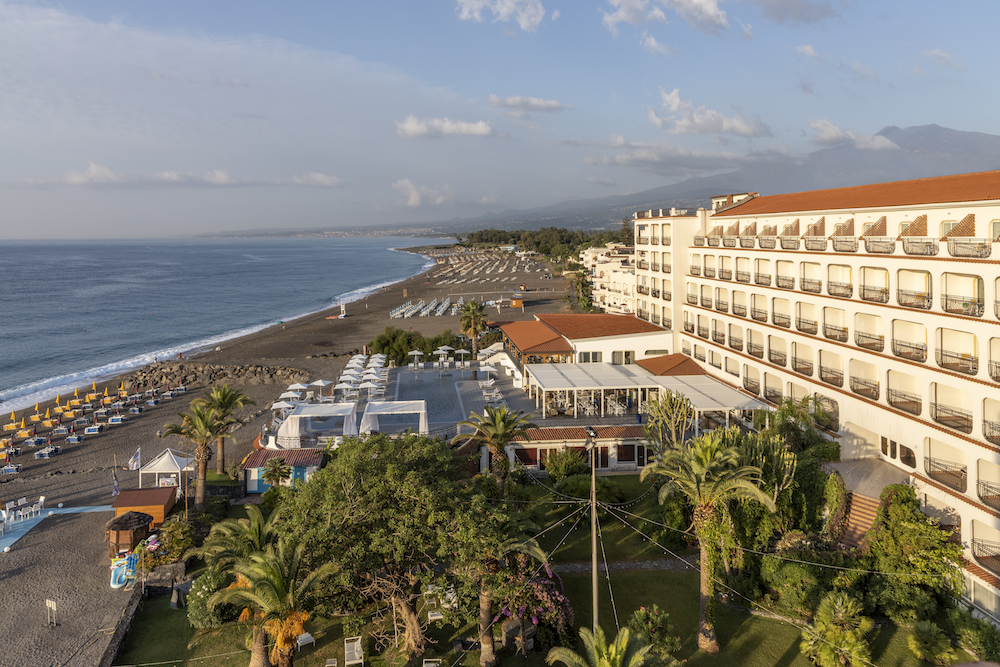 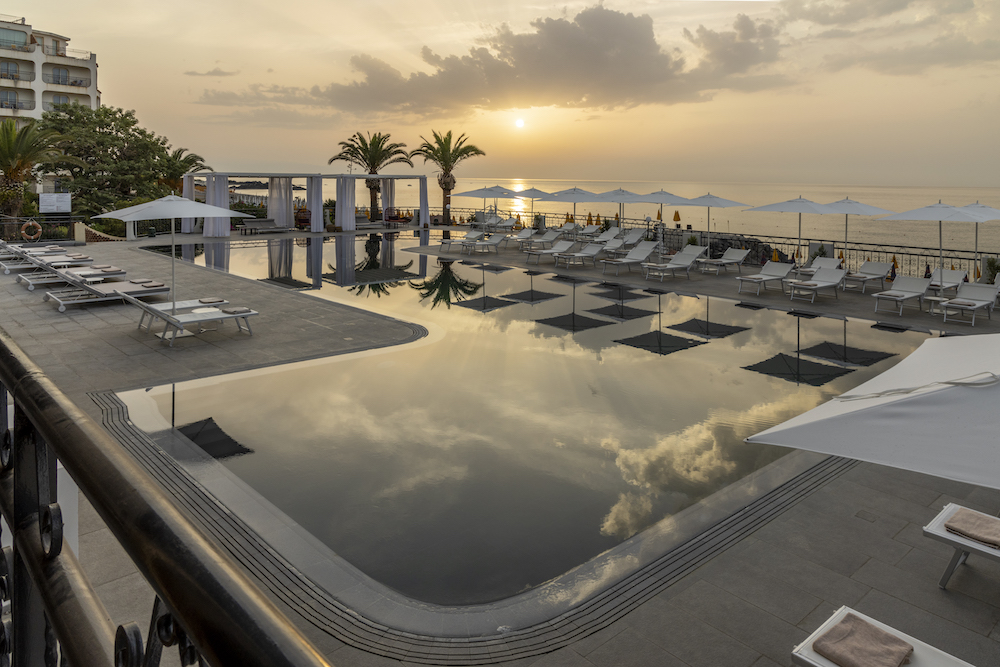 While the natural beauty of the location made it an interesting place to visit, it was the fashion house of Dolce & Gabbana that arguably put Sicily on the fashionista map, and spread the island’s crafts worldwide by incorporating iconic Sicilian images in its bold prints like the colourfully decorated horse cart, ripe lemons and oranges. This was an early inspiration for the interior design concept created for the hotel by THDP, the London based interior designer and architectural practice with a team of 50 per cent British and 50 per cent Italian designers (the best of both worlds). The design team consisted of Nicholas J Hickson and Manuela Mannino (Founders of THDP) and Simone Bretti (design) and Francesca Benedetti (architect). 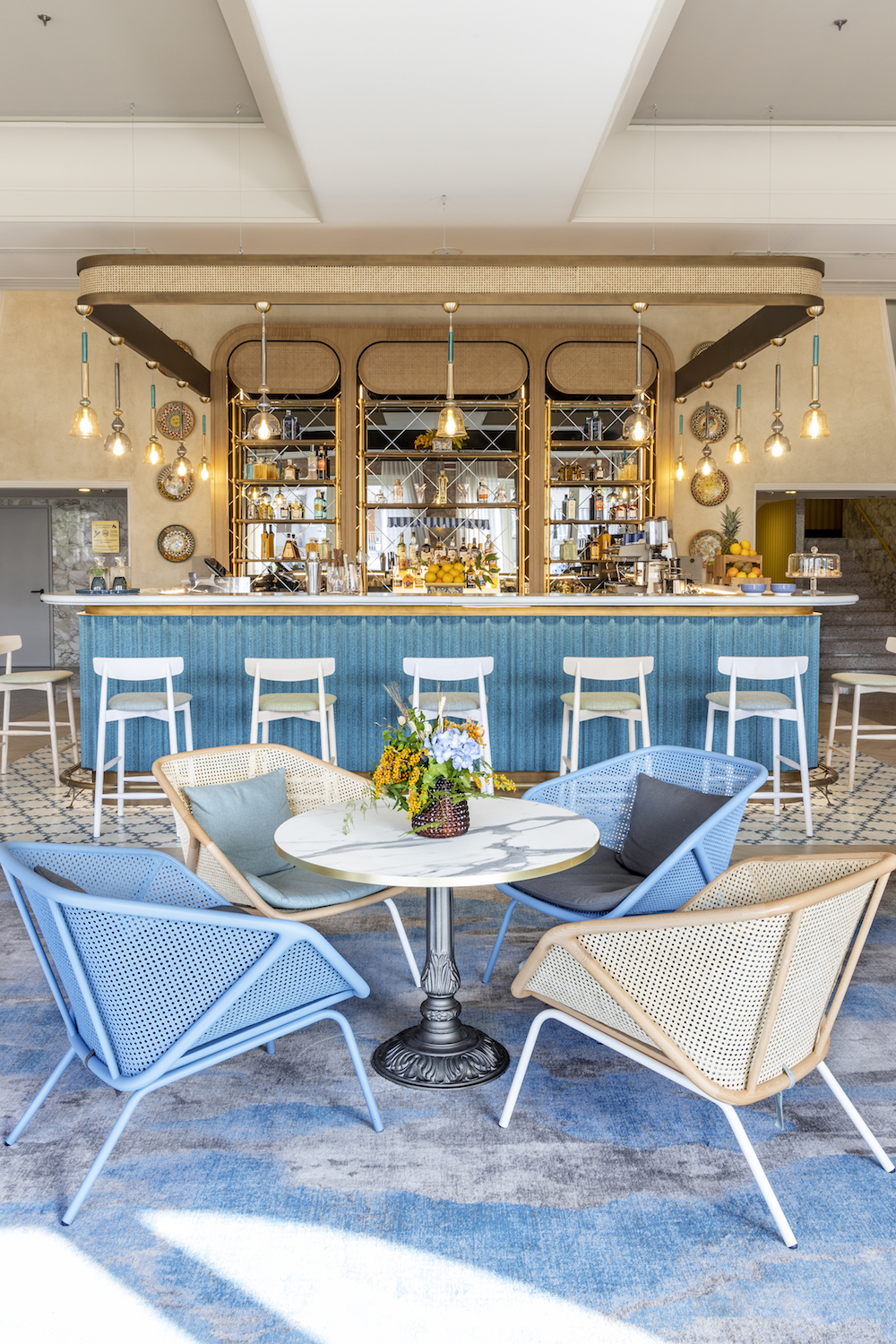 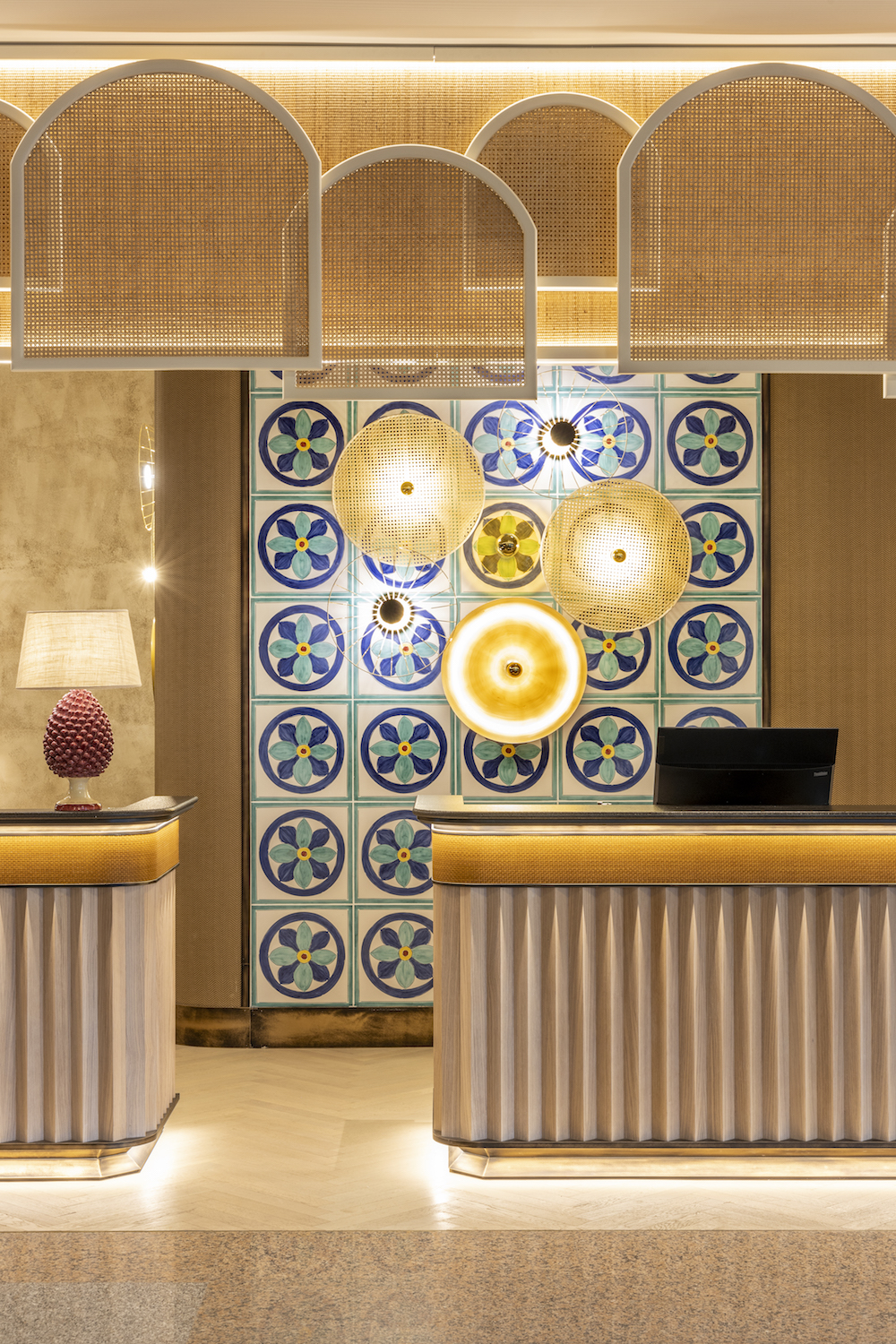 Making a sensitive nod to the destination’s history and modern culture, in order to inject apt sense of place, the interior design studio THDP decided to centre the concept of its design for the hotel around the location’s unique topography. “Inspired by the natural beauty of the volcanic beaches, the sea, mount Etna’s super-natural presence and the features of the island of Sicily, the vision was to bring them into the centre of the hotel,” explained Benedetti. “By adding local decoration, artworks and colours, the goal was to add character – a deep sense of authenticity and a refined and resort-based palette of natural tones with touches of colours of the sea.”

Detailed local research guided the narrative of the entire  project, commencing with the refurbishment of the main public areas – the lobby, lobby bar and guest check-in area – before retouching the F&B areas, including the main restaurant and the pool dining and bar spaces.

The lobby was a large and open space, which was previously decorated in a heavy baroque style. “The concept from the outset was to re-activate this space, giving it a new heart and focal point – and to be appealing to both guests and to walk-in locals,” said Bretti. “From concept stages, we considered adding a new lobby bar to the centre of the space, being both a visual anchor but also dividing the space and making it feel more intimate.” With the new layout smart workers and leisure guests can meet using a polyvalent area which can hosts all thanks to the different typology of seating. The style is elegant and authentically Mediterranean with sea colours and Taormina’s stone colours melting indoor and outdoor colour palette. 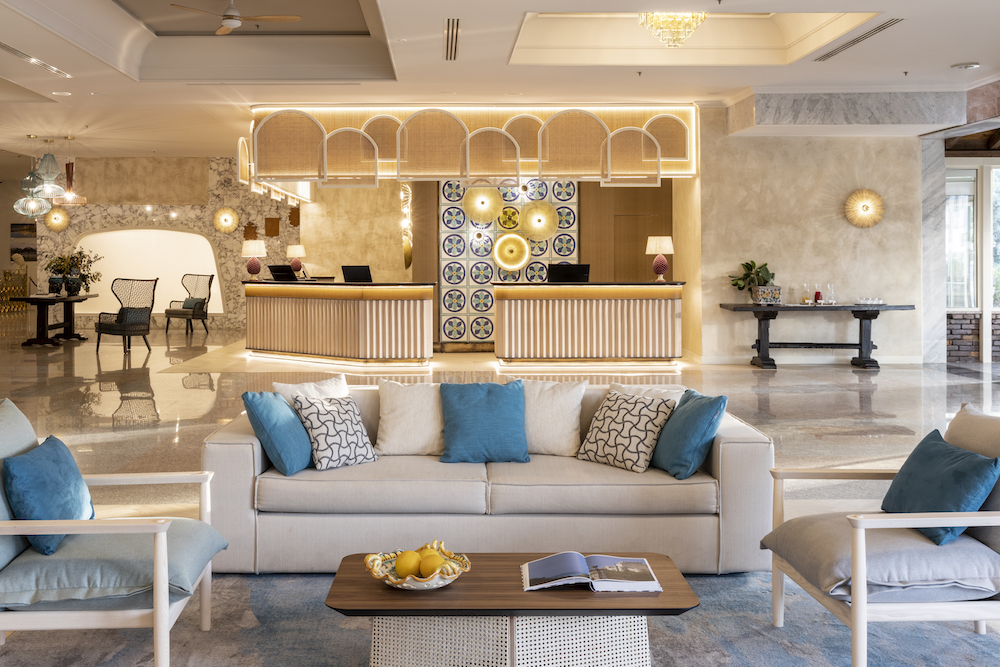 The reception has been inspired by the Sicilian attitude of welcoming and it has been translated in three large reception desks with dark grey lava top fabricated by Nero Sicilia.  The rear feature wall is tiled with hand-painted local tiles by La Fauci. The accent decorative lights are from Aromas del Campo and are of copper and rattan, thus from the very beginning of their journey the guest is surrounded by an authentic and local experience.

The restaurant, Panarea, has materials, features and shapes that remind guests of antique craftsmanship, incorporating hand painted tiles in the niches at the entrance with traditional motifs from La Fauci.  The buffet area has screens featuring irregular but geometric shapes hanged from the ceilings that recall ancient Greek terracotta jars. The artisan tributes continue on the walls covered with a braided woven leather cowhide effect inspired by ancient Greek sandals. 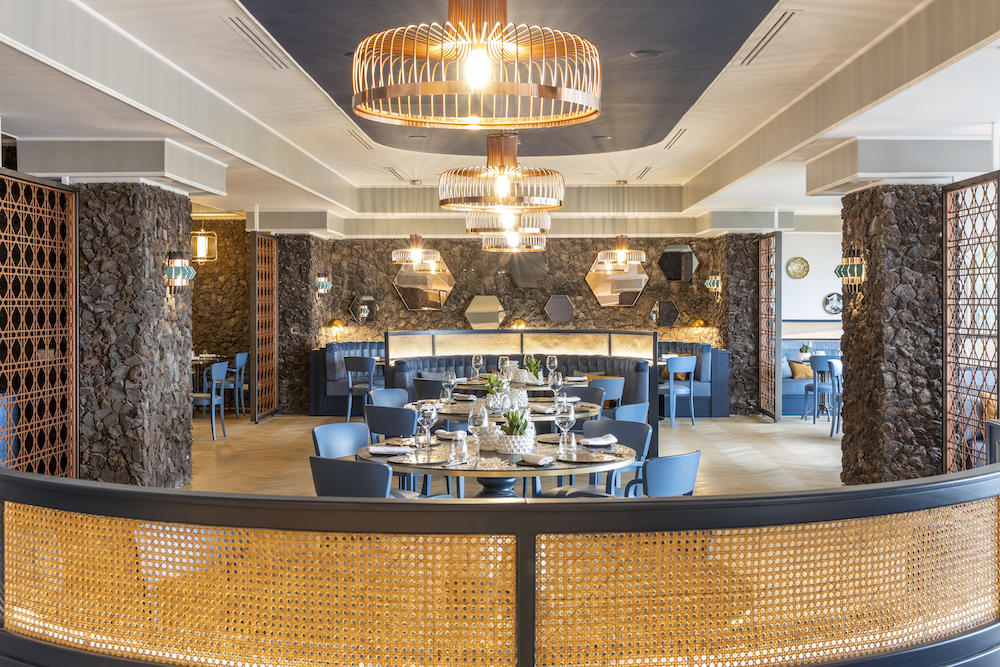 La Sciara Restaurant’s design, meanwhile, has been inspired by the existing wallcovering of lava stone: the space has the darker tones echoing those of the Mount Etna volcano, the dark ominous stone is counterpointed by the vibrant blue and red glazing – recalling colours of the sea at night, foreboding, dark yet attractive and welcoming.  The metalwork in the restaurant is a rich copper tone, accented by rich blue lacquers, and the table top feature rich glazed textures applied with glass onto the lava stone, all by Nero Sicilia. The entire space naturally calls to mind dining in a more elegant and finer restaurant.

The Fluido Bar is located on the pool terrace, just outside La Sciara Restaurant offering breathtaking panoramic views of the Mediterranean sea and the unique grey volcanic sandy beaches. The pool bar is characterised by a contemporary, indoor-meets-outdoor styled residential look and feel. The walls are finished in a cement-coloured panels by Cosentino, the bar top is white Dekton and the bar front is feature tiles in raw and glazed lava stone by Nero Sicilia. 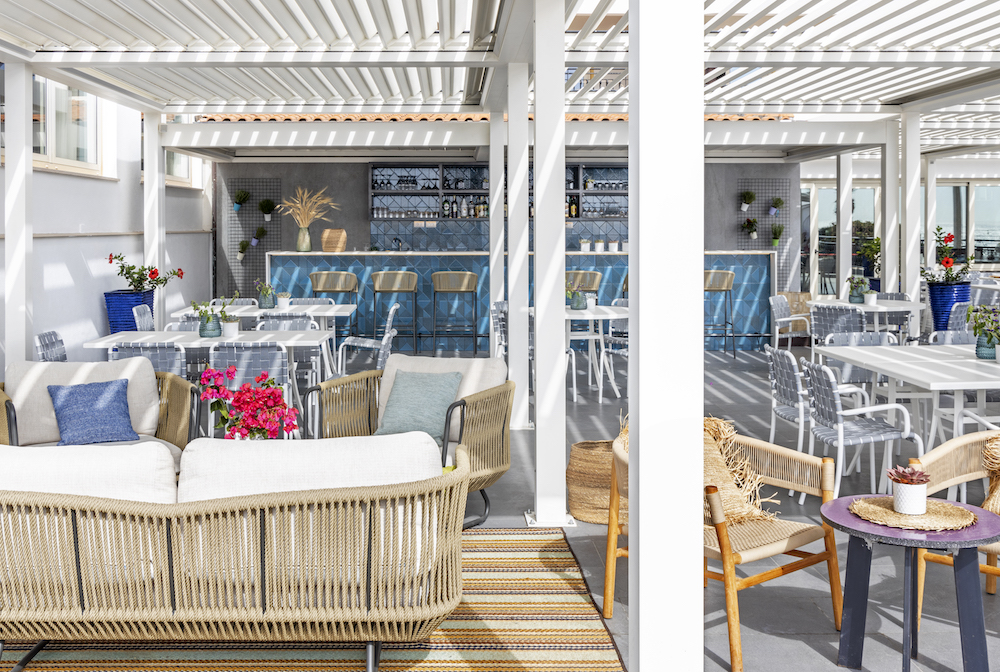 The bar serves pre-dinner aperitifs with signature cocktails, open to guests and locals, the ambition is to become a destination bar for the hotel adding to its local night scene. The seating is part dining, part informal lounge sofas with outdoor furniture by Etimo & Varaschin. The flooring is a grés-tiling from Gruppo Florim, who also provided the surround to the pool and its interior. Large ecru umbrellas offer shade to the guests during the summer times. THDP created a warm garden style lighting effect, selecting outdoor weathered wall fittings by Aldo Bernardi and suspended light by Faro Barcelona.  The large pergola and pavilions are custom designed and supplied by Corradi.

> Since you’re here, why not watch a panel discussion on bathroom design that THDP’s Nick Hickson participated in recently?

The hotel emerges from one of the most difficult periods in hospitality history wth a fresh look and feel, which will no-doubt take it – and the destination – into a new era that puts emphasis on craft, authenticity and simply travelling for longer.