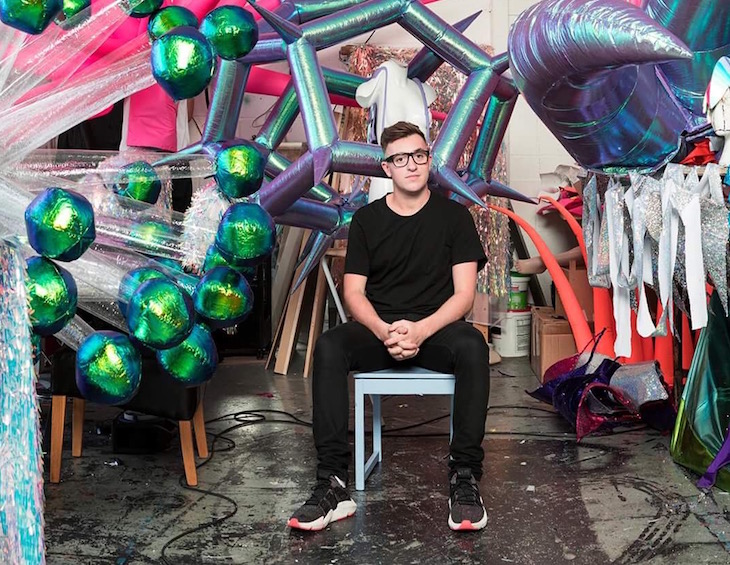 Having previously designed statement outfits for many international music and fashion icons, Jack Irving’s alternative style has recently spilled out onto the hotel design scene. Editor Hamish Kilburn joins the fashion designer, in between photoshoots, to understand how two worlds have recently collided…

The brand ‘Jack Irving Studio’ and the creative man behind the logo are two very different things. One is bold, disobedient and you would expect – almost encourage – to cause an outrageous impression in almost any social scenario.

The other orders a lemonade on a hazy Thursday afternoon at a media interview as he catches his breath between work engagements. Opposites do attract, after all.

Made famous by creating outlandish outfits for the likes of Lady Gaga and The Spice Girls for their come-back tour, the talented story-telling designer, Jack Irving, made his mark on the fashion industry by producing items that infused glamour and engineered technology.

His innovative work recently emerged on my radar when he unveiled the result of a collaboration with W London Leicester Square, which has been the designer’s first interior design project to date. “The idea of working with W Hotels was mentioned to us at Pride London last year,” says Irving. “But it wasn’t until November, following my first show at the V&A, when we met the team to really discuss what we could do together.” 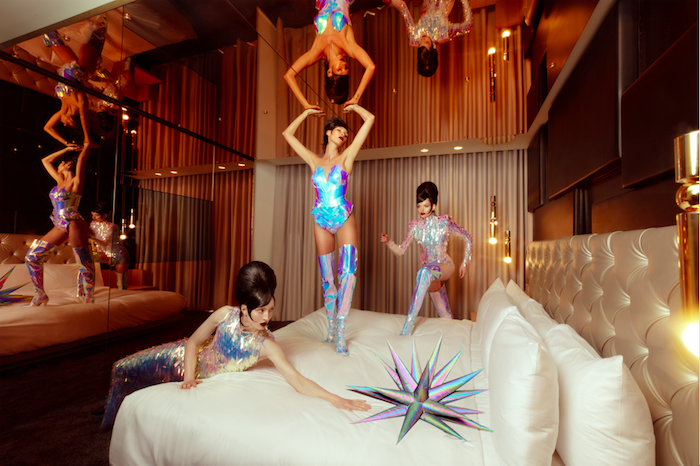 Presented by a loose brief to bring a flavour of ‘Jack Irving’ into the hotel, it became clear that that the W brand was willing to give the designer the creative reins in order to produce a statement piece for their newly designed guestrooms and suites. “They wanted a replacement for the current cushions and bed throw that met brand standards,” he explains. “The bed, for us, became the canvas.”

One month after the brief was given, Irving pitched what he explained at the time to the client as a ‘crazy tech idea’ for the concept of new cushions. He wanted the items to be inspired his signature sea urchin style, which became famous by his work with Lady Gaga. Irving then wanted to make the interiors more instagrammable. The spiked pillows’ fabric would appear muted to the naked eye until they are brought to life through the click of a camera flash. Through the lens, the smart fabric would transform into an iridescent masterpiece. “To be honest, we were hesitant as to whether or not the client would see our vision,” explains the designer. “What we pitched was as far away from convention as we could have gone.”

Irving and his partner (in life as well as well as in business), Rhys Beynon, received a call from the client while they were on a yoga retreat in Goa over Christmas 2018. “They wanted to see prototypes the first week of January,” Irving explains. “At this point, the pressure for us was on to meet the deadline.”

Hamish Kilburn: What would a Jack Irving guestroom look like if you were to design it?
Jack Irving: It would be ridiculous – think sea urchin chairs and UFO beds. I also have the idea to design a Chesterfield sofa in the rainbow smart material.

HK: What’s been the most challenging part going from fashion to interiors?
JI: It hasn’t actually been that challenging because W Hotels were so on board with our idea.

HK: Where’s next on your travel bucket list?
JI: New Zealand and LA!

HK: How do you switch off from work?
JI: Both Rhys and I are really into techno. Oddly, it’s become our sanctuary.

HK: What’s your biggest bugbear when checking in to a conventional hotel?
JI: When hotels don’t stay in their lane.

HK: What materials are really inspiring you at the moment?
JI: For me, smart fabrics and metallic fabrics are really fun to play around with. I want to experiment more with the manufacturing of the material we have been using. That being said, you can’t rely on the fabric. The shape and structure is just as important. 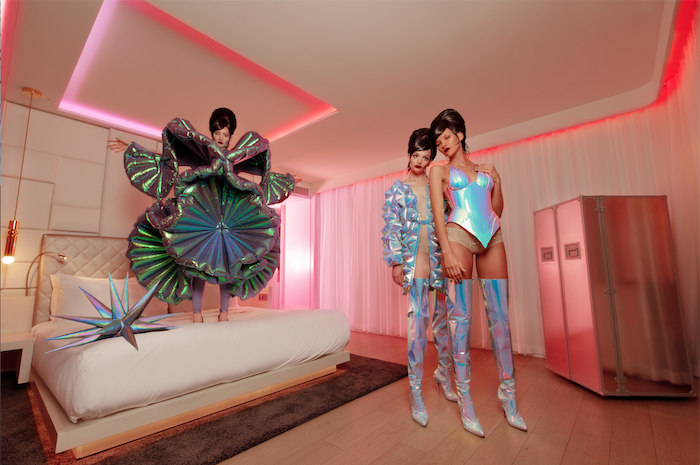 With time depleting by the day, and with fabric supplies on order to be delivered when they returned home from India, the next challenge was to secure a manufacturer. “The word ‘impossible’ landed in our inbox a few times,” explains Irving. “We did receive a lot of kickback at this stage from manufacturers, mainly because of the demand and the order size.” Undeterred, Irving and Beynon’s ‘when there’s a will there’s a way’ approach led them both to source the materials themselves to prove that it could be done. “I remember sitting on the beach with Rhys making a cardboard model of the cushion,” says Irving. “It’s one thing drawing the design, but it becomes very real when designing a 3D model.”

As well as the shape of the accessory being unconventional, so too was the material that designer decided to work with. “We call it rainbow smart fabric,” he explains. “We were worried that it would look to synthentic when not lit up, but in reality it was the perfect material to use for creating that contrast.”

As with all creative projects at pitch stage, there is an air of uncertainty, especially when it comes to unveiling to clients a prototype as futuristic as this one. “I was terrified when it came to pitching because you just don’t know how it’s going to go,” admits Irving. “We hadn’t seen the new rooms that our statement accessories would sit in, so it could have gone either way, as these things often do. But they loved it, and the second prototype we made on the beach in Goa over Christmas became the product that’s in the W London today.”

Irving’s interior design work for W Hotels may be just a dip in the ocean for now, but the designer’s ability to disrupt convention through the use of innovative materials and shapes unquestionably makes him a true innovator on the international hotel design scene.