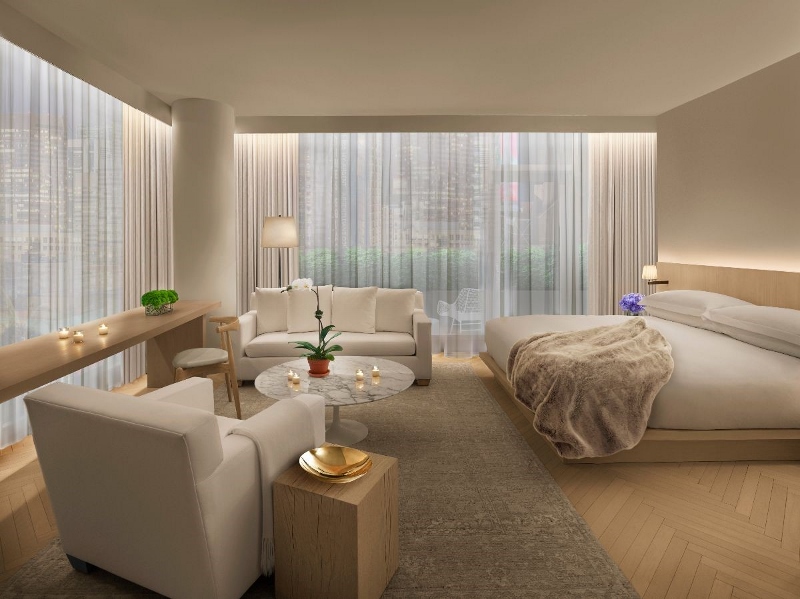 There simply has never been anything like it before in New York City’s famed cultural and entertainment mecca. Ian Schrager, in partnership with Marriott International, has introduced the sophisticated The EDITION Times Square, which will shelter the first Michelin-starred chef ever to grace the neighborhood, along with the creation of a new form of Cabaret theatre and a complete reinvention of billboard art.

Throughout the decades, Times Square has seen myriad changes and has taken on many iterations. By World War I, it was the center of culture, nightlife and entertainment. By the 40’s and 50’s, the Latin Quarter Nightclub presented festive floor shows that featured chorus girls and can-can dancers, Frank Sinatra, Frankie Laine and the Andrew Sisters. There was Tin Pan Alley, the Copacabana and the Theater District. There was Roseland, Birdland, Ella Fitzgerald, marathon dancing, hot jazz, Doo-Wop and the pop rock of the Brill building as well as the invention of the now gossip columns. It was a democratic “meeting place” and nothing exemplified the disorder of the city or the dichotomy of high and low art than Times Square. Sadly, however, the Great Depression and World War II took its toll on the area and Times Square began its decline. From the 60’s onward, the area was riddled with adult entertainment, prostitution, drugs, and crime. It wasn’t until the mid-80’s when the Marriott Marquis opened its doors and Disney debuted The Lion King at The New Amsterdam Theatre that the clean-up began with the redevelopment of new theaters, retail, hotels and eateries.

Despite Times Square’s notorious reputation, it has managed to maintain itself as a symbolic global, geographic and cultural icon. It had long been home to media giants as well as the center for theater, music, culture and entertainment. This adventurous mold-breaking, however, has disappeared. Today, Times Square and its overindulgent commercialisation that lacks the substance and sex-appeal that once distinguished its streets. It is hungry for a Renaissance and The Times Square EDITION will usher in a new era. The hotel and all of its unique offerings seek to preserve the essence of the area during its Golden Age when it was the microcosm of the best New York City had to offer.

“The Golden Age of Times Square elicited the feeling that anything was possible. New York was the City of Dreams, Times Square at its heart, where everyone came together with a common purpose,” said Schrager. “The Times Square EDITION is the embodiment of this storied past, resurrected for the present, providing hope for the future of this most beloved neighborhood.” 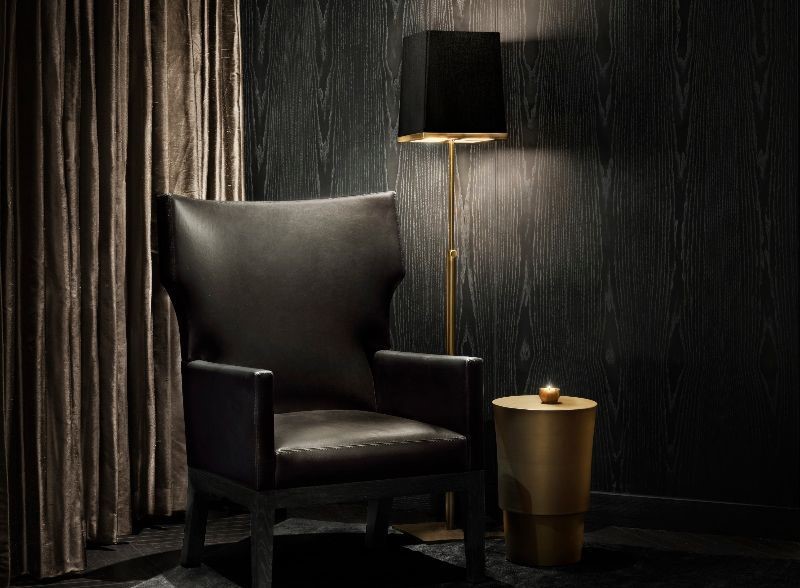 From the moment you enter the hotel’s doors on 20 Times Square at West 47th Street, guests are transported to another world—a decompression zone. A long ivory hall with venetian plastered walls and ceiling and a floating custom green mirrored stainless sphere inspired by Anish Kapoor and the colors of Jeff Koons await you. Once gusts arrive at the Lobby and Lobby Bar, a series of black and white spaces, which is worlds away from technicolour scenes located on the streets. Each of these two extremes serves the other yet each stands on its own. But together, something new, original, and even stronger is created. Indeed, with this alchemic symbiosis, a new reality and a virtual fourth dimension is created. As guests move in and out continuously, the space becomes boundaryless. This clash of worlds, this surreal sense of space and time is best experienced on the outdoor terraces, appropriately named the Bladerunner Terraces, that frame the various public space floors. On the terrace off the Lobby Bar, guests can choose to be in your own private oasis escaping in a cocoon-like area or face the brilliance of flashing light and color of Times Square for the best light show in the world.

“The hotel is an oasis of sophistication brought to you through the insight of the incomparable Ian Schrager, my friend and partner.” – Arne Sorenson, President and CEO, Marriott International.

Off the Terrace Restaurant, a similar feeling awaits on expansive terraces that were inspired by the L’Orangerie at Jardin des Tuileries in Paris. The outdoor space in totality with thousands of plants, trees and ivy is perhaps the biggest indoor landscaping effort in the country was designed by Madison Cox and is literally, multi-level gardens in the sky. The public space interiors with their rich woods, lush velvets, waxed leathers, polished marbles and smooth metals are combined to create a chic, simple, hip, serene and luxurious setting, an antidote to the hectic life just outside the hotel’s doors.

“The Times Square EDITION is an entirely new lens on Times Square. From an aerie above the hubbub below, you can engage, observe or withdraw. The hotel is an oasis of sophistication brought to you through the insight of the incomparable Ian Schrager, my friend and partner. There is simply nothing like it.” Arne Sorenson, President and CEO, Marriott International.

The first Michelin-starred chef ever in Times Square, John Fraser, is spearheading the food and beverage at the hotel to create a cacophony of dining experiences. The fine dining restaurant named 701 West is a gastronomic gem in a jewel box-like setting that is an explosion of color.

The Terrace Restaurant and Outdoor Gardens is an original take on a four meal, 18 hour-a-day restaurant inspired by traditional French brasseries and American chophouses but taken in a completely new direction by Chef Fraser.

The entrance to the Terrace restaurant will host the debut exhibit of specially curated candid portrayals of “the real New York City”, the one not seen by visitors, capturing energetic, gritty and poetic street and neighborhood scenes by renowned photographers Helen Levitt, Elliott Erwitt, Bruce Davidson, Ruth Orkin, Arthur Leipzig and Cornell Capa to name a few. The following exhibit will shift to more current street scenes illustrating the culture and diversity that pervades the city today. The space will continue to house rotating photography and art exhibits by various well-known photographers and artists.

The Paradise Club is an inventive, chaotic, high production spectacle perfectly suited for Times Square. The brainchild of Anya Sapozhnikova, Justin Conte, Matthew Dailey and Kae Burke of House of Yes in Bushwick, Brooklyn, this edgy and provocative modern-day Cabaret manifests the disorder of the City and adds a whole new dimension to the hotel and to Times Square.

The shows will be part theatre, part performance art with talent across many disciplines including dance, voice, aerial acrobatics, choreography, costume design and magic. There will be a regular ongoing performance based on William Blake’s The Marriage of Heaven and Hell. With no formulas, rules or any specific structure, but not for shock value, each performance at Paradise Club will be different from the previous one and different from the next. For a new twist on dining and entertainment, the menu will be original and creative from hot dogs to caviar and everything in between.

“Paradise Club is a place of aspiration… Invention and reinvention… A refuge to enjoy life and forget life and the perfect place to escape into fantasy,” said Schrager.

This one-of-a-kind cultural entertainment space also features the most sensational, immersive, colorful and kinetic lighting effects designed by Tony and Academy Award-winning Fisher Marantz of Studio 54 fame and inspired by a Lenny Kravitz video, as well as bespoke hand painted murals inspired by Bosch and Dali–a modern successor to the world famous Maxfield Parrish’s King Cole mural on Fifth Avenue. Perhaps the most spectacular element of the space is the full-blown production studio and control center that allows for live simulcasts and broadcasts around the world, as well as locally to a “Best in Class” 17,000 sf-8K-8mm Jumbotron outside of the building and a high definition digital screen on the stage. The exterior Jumbotron will also display rotating art by current video artists, cinematographers and animators.