The interior designer behind Rosewood Bangkok 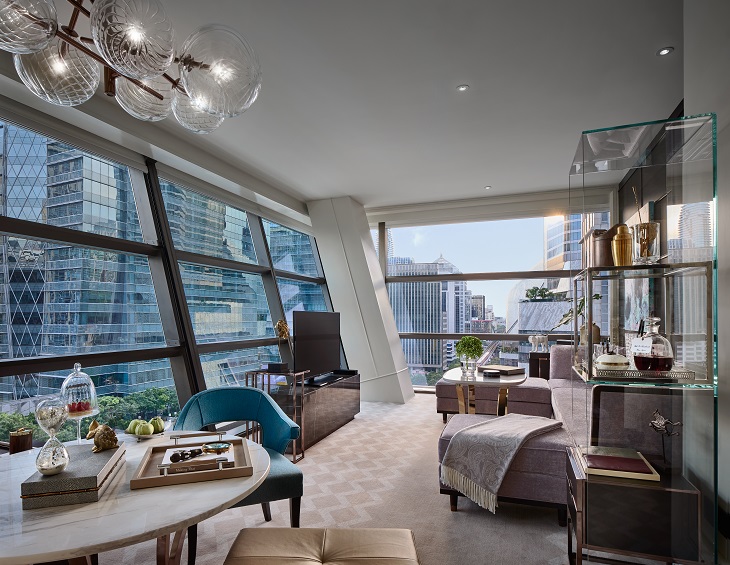 The interior designer behind Rosewood Bangkok

As its highly anticipated opening is imminently on the horizon, the Rosewood Bangkok’s interior design story is one yet to be unveiled in detail. Editor Hamish Kilburn caught up with interior designer Celia Chu to establish the narrative told within the walls of the soon-to-open 159-key luxury hotel…

The interior designer Celia Chu has worked for many leading international hotel brands across Europe, Africa and Asia & North America including The Grand Hyatt,  Hyatt Regency, Crowne Plaza, Intercontinental, to name but a few.

Since establishing the design firm Celia Chu Design, the combination of inspired creativity and comprehensive design strategy has been the main driving force and much of the time its competitive edge. Chu’s reputation of being a global modern designer, who can balance trendsetting statements with timeless style, inspired Rosewood Hotels, which turned to Chu to design its next luxury statement located in the ever-changing landscape of Bangkok.

With its luxury arm expanding 24 prestigious properties around the globe, being responsible for the interior design direction of a hotel branded by Rosewood requires a tenacious mindset. Balancing the interiors to be sensitive to the heritage of the brand as well as to be an ultra-modern, timeless hotel that challenges conventional design is a hurdle faced by most designers in today’s industry. However, designing a 159-key luxury hotel within the shell of a new architectural landmark – one which takes statement architecture to new global heights – was a totally new quest. Despite the boundaries, mental and physical, that were ahead when receiving the brief in 2016, interior designer Celia Chu took it all in her stride, and her vision slowly became the Rosewood Bangkok.

“It sometimes felt like I was writing a novel, taking one chapter of the story at a time.” – Celia Chu

Slated to open this Summer, the hotel has all the ingredients required to not only raise the awareness of the Rosewood Brand, but also to elevate the overall image of the city below. “To me, it’s important to first understand what kind of a story you want to tell and how you want the guests to feel,” says Chu. “When designing the concept, we become heavily involved with the culture, and all decisions have to come from the heart. Shanghai is a very modern city with a high population. As well as striving to achieve a more international look and feel, Bangkok is also very humble and it was therefore integral respect the nature of the area. I have kept this in mind throughout the entire project in order to create personal moments; it sometimes felt like I was writing a novel, taking one chapter of the story at a time.”

As well as the obvious, the sheer scale of the building and its angular architecture, there were other minor details of the site to consider when beginning the design journey. The first task for Chu and her team in the bustling Asian city of Bangkok, was to imagine a theme that would stand out from the other hotels in the area. While many designers would ‘go big or go home’, Chu opted for a more refined way of thinking. “Although it is hard to believe, because of the noise that the architecture renders have created, the site is actually very small,” Chu explains. “The design has always been very informed to feel, once completed, more like a luxury residence rather than a hotel. Therefore, the devil was absolutely in the detail.” Chu’s relationship with the architects, KFP Architect, became the fuel to the success of the overall project. 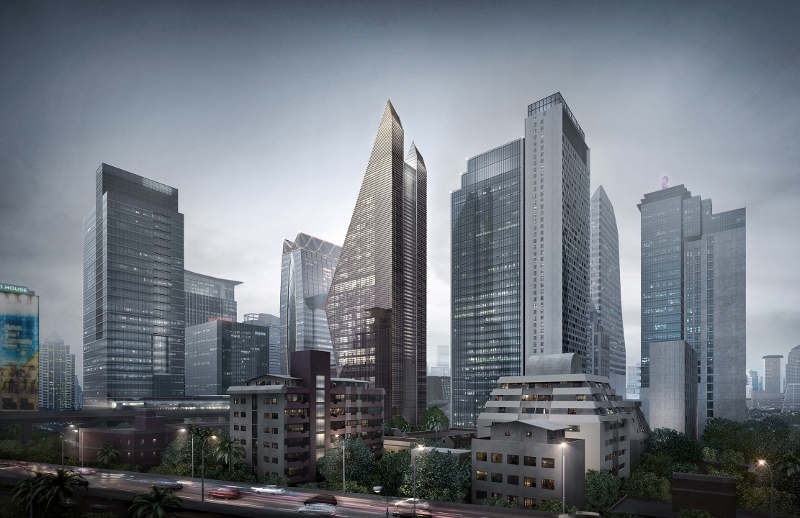 The building itself is visually striking – a bold move for Rosewood, which has traditionally decided to shelter its luxury abodes within classic buildings. The architecture of the 33-storey building was inspired by the Thai hand gesture of ‘wei’. “Working closely with the architects throughout the whole process, our goal for the interior design was to continue this theme of local gestures inside the property. “I love the building and our challenge was to ensure that both the architecture and the interior design blend into each other,” Chu says. “As an extension from the ‘wei’ on the exterior, in the interior design we have created all these different cultural areas, some more abstract on this theme than others. For example, while the architecture uses ‘wei’ as inspiration, there’s an area within the hotel that is inspired by another hand gesture used in Thai dance.” What many designers would consider a challenge when faced with the striking face of the architecture, Chu saw this as an opportunity to create an interesting chapter within the novel.

For Chu and her team, creating the residential look to create sophisticated tones throughout the hotel was key. To do this, she considered interesting surfaces, colours and textures. “I typically use a lot of materials the way that I design – I like to pile up layers from a base,” Chu explains. “For example, as a base I have used luxurious heavy materials such as marble, metal, leather, but to add layers I looked at traditional local materials such as wood carvings and textiles.” 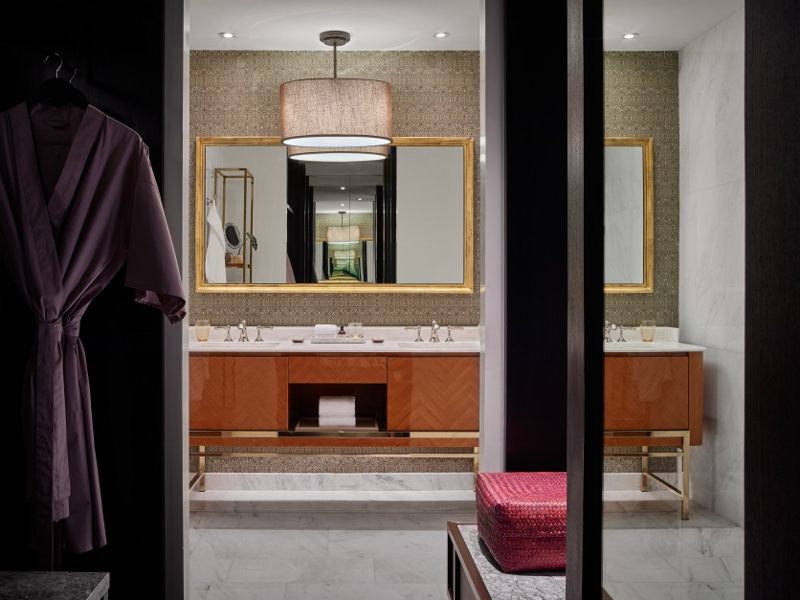 Within the design of a hotel of this scale, there is of course a larger context. Being a modern global designer is arguably more challenging than ever before. The double-edge sword that is technology and trends continue to divide opinions among the hotel designers in the 21st century. Chu’s experience highlights, like most, a challenge to establish ‘timeless décor’ in the ever-shifting landscape of design. “From the time we start a project start to time we finish can be up to eight years. With hotels that need to stand as a statement for a minimum of 15 years, this creates a variety of challenges when selecting styles and interior pieces,” says Chu. “My aim as a modern global designer is to support local artists, especially those who manufacturer locally. I believe I have an ethical duty to help establish the economy of where I am designing.” 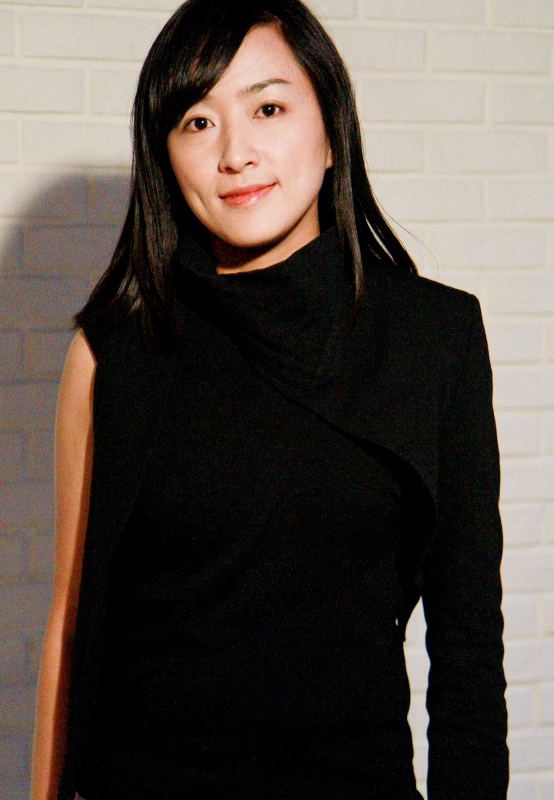 If the beating heart of a luxury hotel is the lobby, then the soul within the body of the property is by far the guestrooms and suites. These areas within the Rosewood Bangkok will use night and day as an obvious theme. “Think modern Thai when imagining what the guestrooms and suites will look like,” explains Chu. “We have used a colour scheme to incorporate dark areas and light areas.” The result of this, I can envision, is a district residential feel, which echoes a similar style to that of the public areas.

While the surfaces will be layered, the lighting will be simple and effective. “Our aim in the lighting was to steer away from being complicated and instead create different light directions,” says Chu. “I find that designers are using more decorative lighting to make the whole system within the guestroom or suite easier to use.”

Lots of time they are trying to peruse an international look. In Bangkok we are trying to respect the humble nature of the area. Especially this client, we design the space I want to make it even more Thai with the history. Like writing a novel for a client. Maybe not on the scale of it, but we are certainly making an impact.

As Chu approaches writing the final pages of what she describes is her novel, complete with thick, textured and timeless pages, I am interested to go where few design enthusiasts dare to go. I am eager, before we say farewell, to unearth which area of the hotel Chu would consider to be her favourite. “That is so difficult to question, as all areas are so different and mean different things to me,” says Chu. “However, the living room/lobby lounge is such an interesting space. It is designed appropriately for an area where guests can enjoy afternoon tea and dinner. Locals too will enjoy this area, which I am very excited about. Therefore, I wanted to tell the story of the client’s memories and is inspired by a music box.”

The end of March will mark the grand opening of the Rosewood Bangkok. As Chu puts the finishing touches to her masterpiece ‘novel’, which will be unveiled to the world shortly, Bangkok’s presence as a rising modern design hub continues to develop in many interesting shapes, colours and sizes.