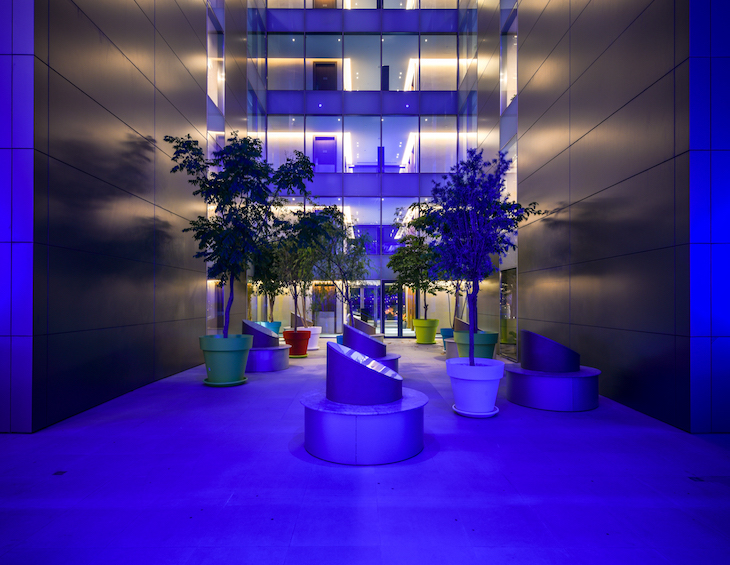 The Radisson Blu, Larnaca was to be illuminated externally with dynamic lighting supplied by illumination Physics, and designed by Archtube, to draw attention, as well as provide a sense of arrival, which was critical to the marketing of the property…

The pace of development in Cyprus is rapid. The influx of ex-patriot investment and the opening of casinos for the first time has created an exciting yet competitive market.

Developers must therefore make strong visual statements if they are to stand out in the rapidly changing business landscape.

The Radisson Blu, Larnaca was no exception, and a statement was required. Therein lay the genesis of the lighting design that was conceived of by Cypriot lighting designers Archtube. 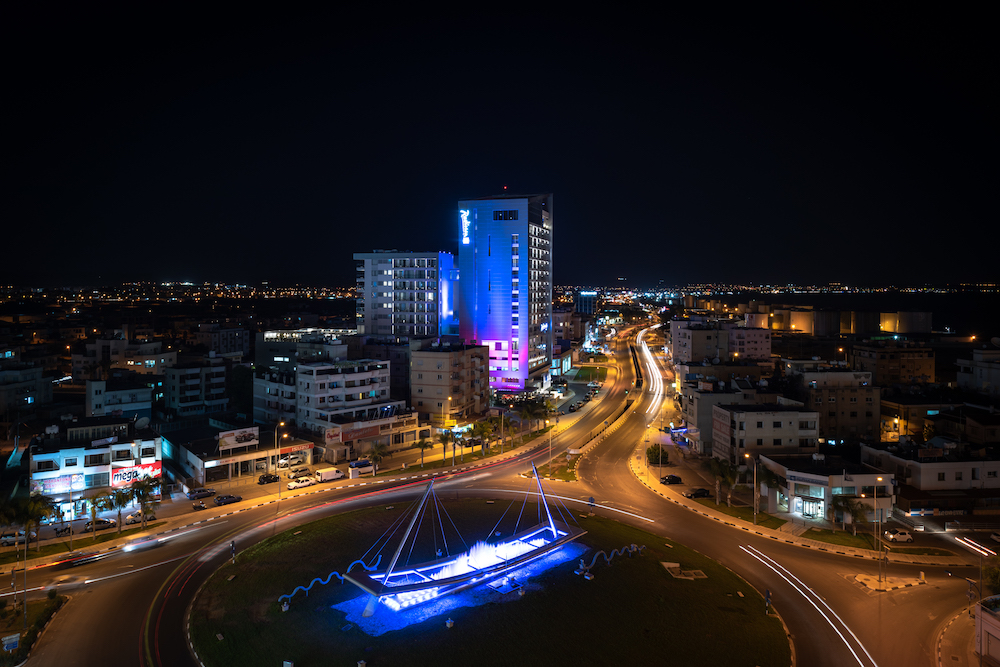 The property consists of two towers connected by a podium. The façade containing the main entrance is entirely populated with guestroom windows and other balconies. This face of the building would be naturally illuminated and did not require external treatment other than signage. It was the slab sides of the building that required illumination as well as the façades of the main tower and secondary tower that face each other across what would be otherwise very dark space. Illumination Physics’ instruction was to produce a synchronised dynamic display of indirect illumination that would be as homogeneous as possible given the limited locations that could be used to mount the light fixtures.

The dimensions of the building are modest; it does not exceed 18-storeys in height for the main tower and four less for the secondary tower. This meant that even the tallest façades would fall into the range of two new illumination Physics light fixtures – the IP Circular Wash Quattro (a 270-watt RGBW wash light) and the IP Rectangular Wash Mono (a 220-watt RGBW wash light). 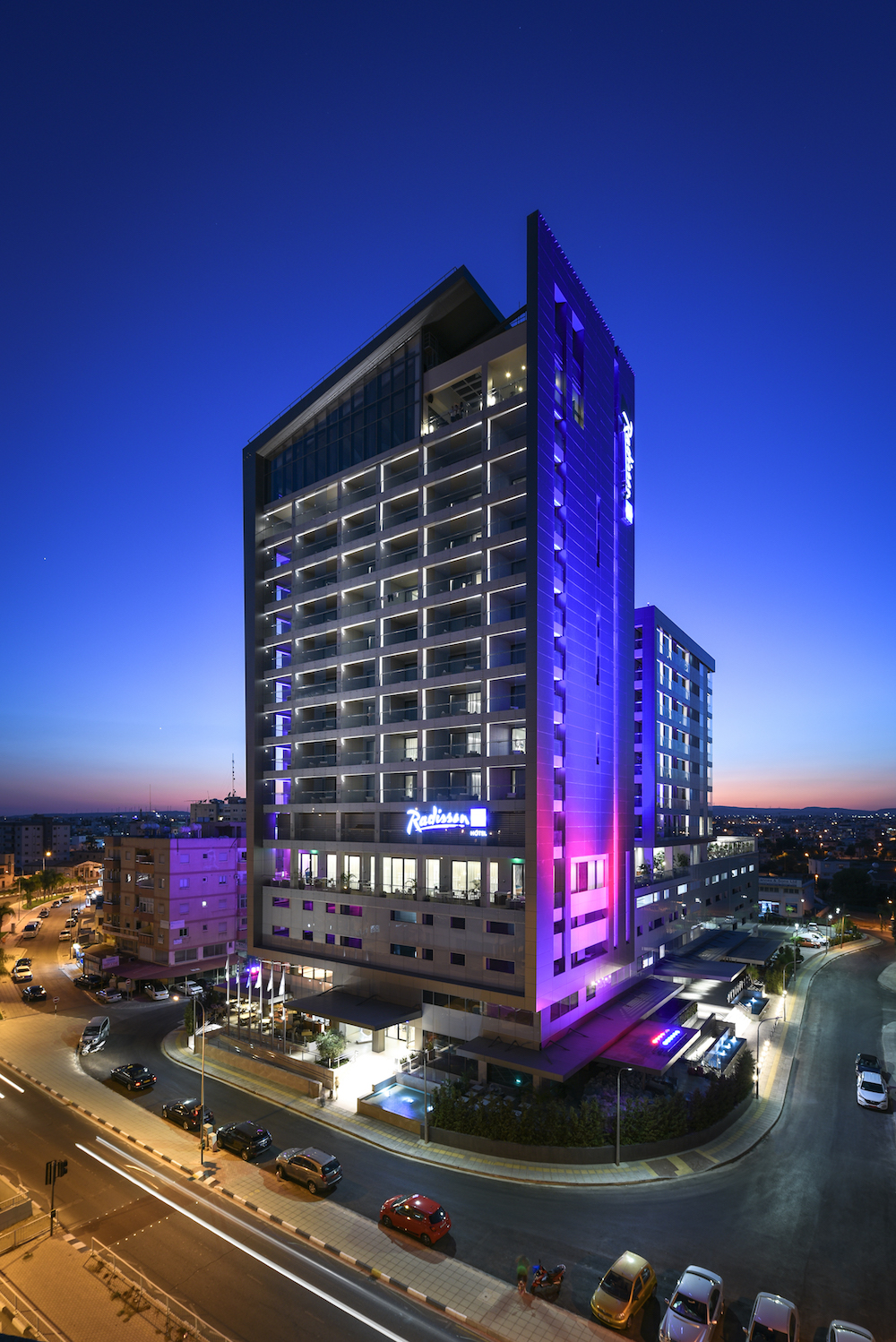 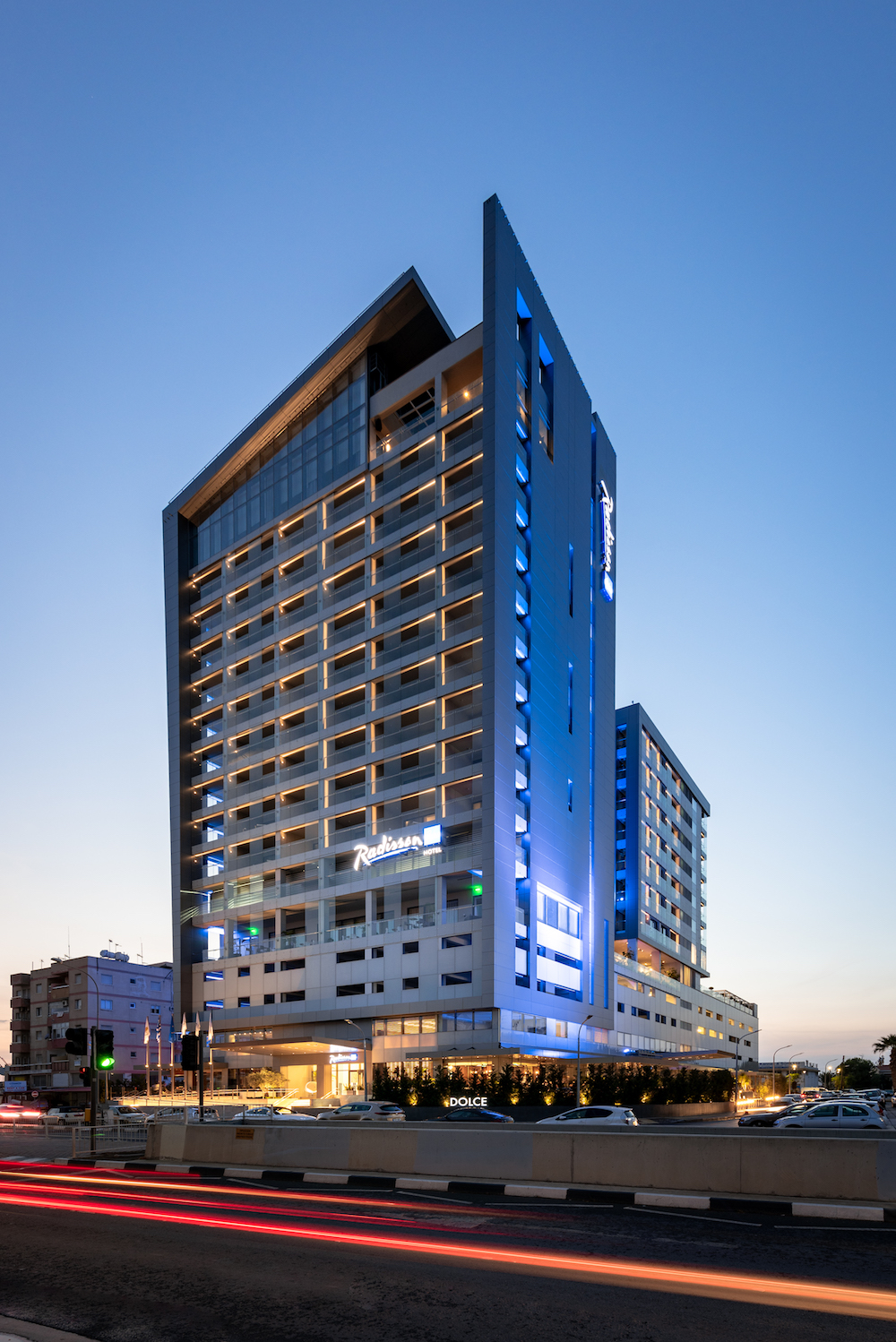 Mounting the luminaires was illumination Physics’ greatest challenge, particularly for the two banks of twelve 270-watt lights that would illuminate the two prominent façades of the main tower.

The lights would be mounted into a frame designed by illumination Physics so that the grouping and spacing were fixed according to their optimal calculations.

The lighting of these two façades was complicated by the fact that the achievable and very shallow set-back was different on one side to the other and two focusses were required. To achieve this, overlapping beams of light with different lens angles were used.

In addition to the façade lighting, illumination Physics supplied the flag pole lights in white light. The IP Circular Series – Quattro 3-6 (25-watt) was ideal. Flag poles are a standard requirement of Radisson for all their hotels worldwide.

Prior to the system being installed, an illumination Physics representative attended the site to instruct the installers on the installation of the data network and other requirements for their systems.

The control system illumination Physics set up provides a very useful control for a hotel client. Preprogramed scenes/sequences can easily be manually selected by the client via the large buttons on the laptop touch screen, which can be labelled with specific names and colours for easy identification. The standard sequence is programmed in consultation with the client and automatically runs every day, activated by the time of day or sunrise/sunset using Quadcore’s astronomical clock function.

This level of care is typical of illumination Physics’ inclusive project management in which they can guarantee a perfect outcome by controlling all aspects of the work.

The lighting effect exceeds the promise of the initial design and the ambition and intent of the lighting designer and their client. The value is such that plans have already begun for the illumination of the second Cypriot hotel of the same brand, currently under construction.

Illumination Physics is one of the brands that has taken advantage of our Industry Support Package. To keep up to date with supplier news, click here.