The Dorchester, where style will always conquer over fashion 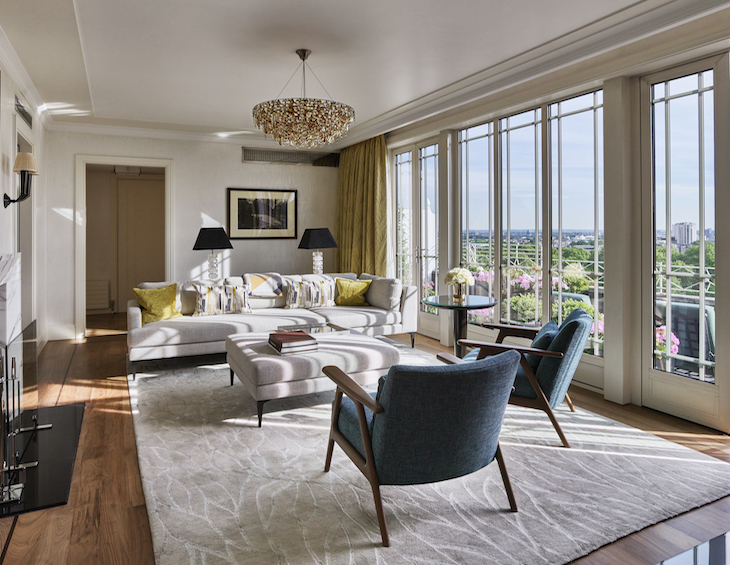 The new challenge for traditional luxury hotels in London – aside from navigating the obvious pandemic – is confronting the demand for a new era of contemporary luxury hotels. Editor Hamish Kilburn checks in to one of Mayfair’s finest establishments, The Dorchester, to understand the power of style over fashion in hotel design. Inside the 250-key hotel, he investigates how heritage luxury hotels are sensitively remaining relevant in modern times…

London, which to many is regarded a capital city of worldwide hospitality (at the very least a major hospitality hub), is entering a new era: the luxury lifestyle market is answering to the demand of modern travellers and, as a result, a new wave of contemporary hotels is approaching the city on an unprecedented scale.

According to the data analysts at STR, pre-Covid, 2020 was expected to become the year with the highest number of hotel openings that the city has ever seen, which was fuelled somewhat by the fall in the pound against other currencies in the on-going Brexit saga. Although this can only be seen a positive for the holistic hospitality industry in London, it no doubt puts into question the demand for – and therefore the role of – traditional luxury hotels that are dotted around Mayfair.

If we were to personify these illustrious jewels in a theatrical manner, think of them as the headline acts; their roles so impressive and unique that they have earned the right to a residency following countless standing-ovation and headline-grabbing performances.

Within this cluster of legends is The Dorchester, a 250-key luxury hotel that shelters a distinct classic English residential style, which has stood proud on Park Lane – majestically on the fringe of Hyde Park – for nearly nine decades. Within that time, it has managed to build and retain a legacy while effortlessly leading London’s premium hospitality scene to rank itself time and time again as an award-winning luxury hotel.

To truly understand what sets The Dorchester aside from other luxury addresses in London, I invited our official videographers at CUBE Video along with me to check in and capture luxury hospitality meeting stylish design. Here’s how we got on:

Since first opening in 1931, after being built in record time over just 18 months (which is the equivalent to the speed of completing one floor per week), The Dorchester has been favoured by royalty and celebrities alike. It was here, in the Park Suite, where HRH Prince Phillips famously spent his last night as a bachelor – and down the corridor where Queen Elizabeth II was spotted on the day of her engagement.

> Since you’re here, why not read our ‘In (Lockdown) Conversation With’ Robert Whitfield, The Dorchester Collection’s Regional Director (UK) & General Manager of The Dorchester.

The hotel’s style was originally created by Oliver Ford, who also handled the decoration for the Queen Mother’s residence at the Royal Lodge in Windsor and Clarence House in St James. Ford introduced details such as handmade carpets on each floor in different floral patterns.

One of the most iconic, and most photographed, areas inside The Dorchester is The Promenade, which is adorned with rich coral coloured silk draperies, custom gold-framed mirrors and striking chandeliers. Rumoured to be as long as Nelson’s Column is high, The Promenade is a clever use of space that stretches right down the hotel’s spine and is aptly decorated with sumptuous seating and striking floral displays that feature ‘The Dorchester Rose’, which was dedicated to the hotel by award-winning rose breeders Meijer Roses. The hotel’s in-house designer florist Philip Hammond explains how a small detail like a rose can compliment the hotel’s design scheme. “This specially selected rose is blousy in composition and has a pale blush colouring, with the pink tone gaining more colour as the rose gradually opens up,” Hammond says. “When you see it against the backdrop of The Dorchester, you really appreciate how it complements our timeless interiors.” 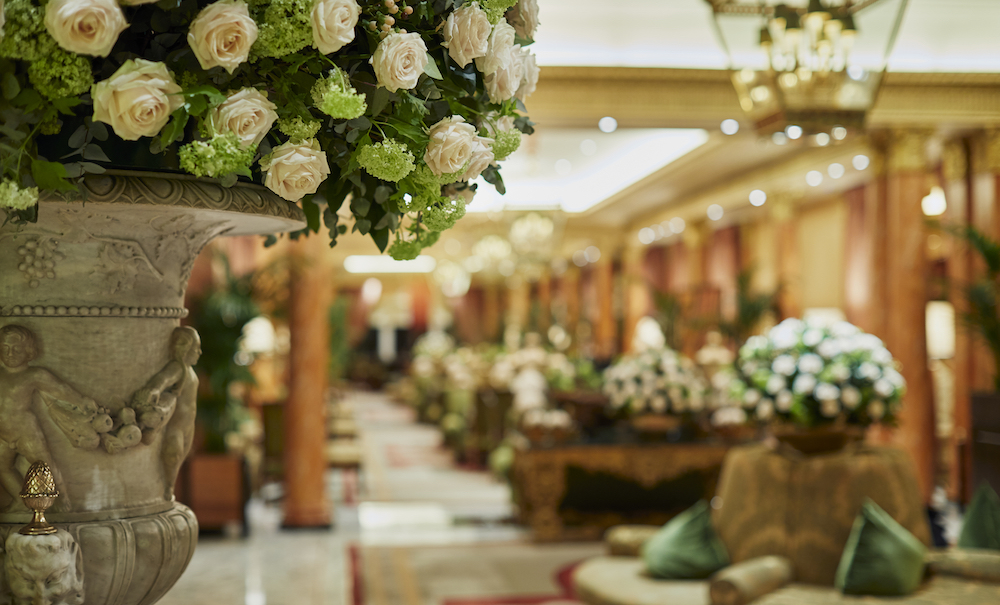 The Grill has been an integral dining outside within the hotel since it opened. However, with the recent appointment of head chef Tom Booton – who at just 27 years old happens to be the restaurant’s youngest ever head chef – the restaurant has been led into a new chapter (and the critics love it!).

As well as serving up a creative and playful menu that was designed by the man who, in his own words is, “all about fine dining without the formality”, everything about The Grill’s modern personality is surprisingly applauded by the hotel’s luxury status. The lobster thermidor tart, for example, has become somewhat of a signature dish for The Grill: a cheesy cheddar tart with thermidor foam and a rich lobster bisque, topped with a roasted lobster tail.

For dessert, The Grill’s twist on tradition now challenges the very nature of conventional dining, subtly, by introducing The Pudding Bar, which is the perfect way to finish off Booton’s dining experience. By pulling up a stall (quite literally), guests can break away from their tables to watch their sweet treat, such as the rich Double Decker (it is as delicious as it sounds) being prepared. Not only does this create a welcome disruption to a standardised dining formula – not to mention putting apt emphasis on what is, let’s face it, the best part of any meal – but it also tactfully injects a healthy dose of theatre within the experience, with guests able to interact with the chefs. 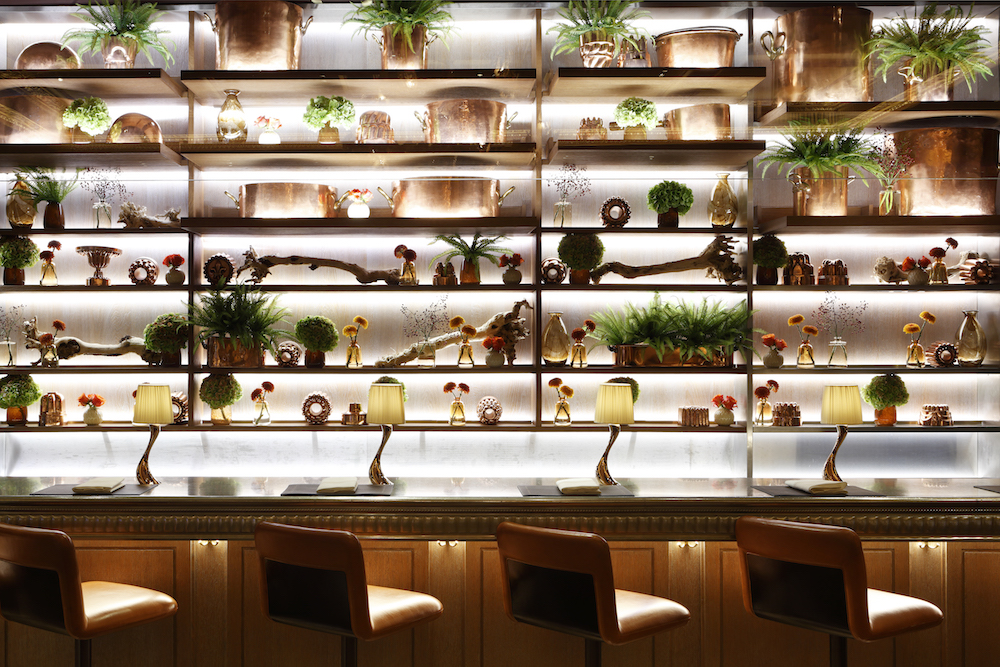 Image caption: The Pudding Bar inside The Grill | Image credit: The Dorchester

There is no doubt about it, the public areas and F&B outlets inside The Dorchester are breathtaking, and operate smoothly under awe-inspiring original design features. But public areas aside, what about the private areas within a hotel where guests demand modern flavour; the guestrooms and suites?

With such a bold and distinctive design narrative comes great challenges and enormous responsibility when the time inevitably approaches to renovate; finding the balance to create the right level of contemporary flavour while staying true to the hotel’s traditional leafy design scheme is an ambitious and somewhat arduous task for any designer, regardless of previous credentials. 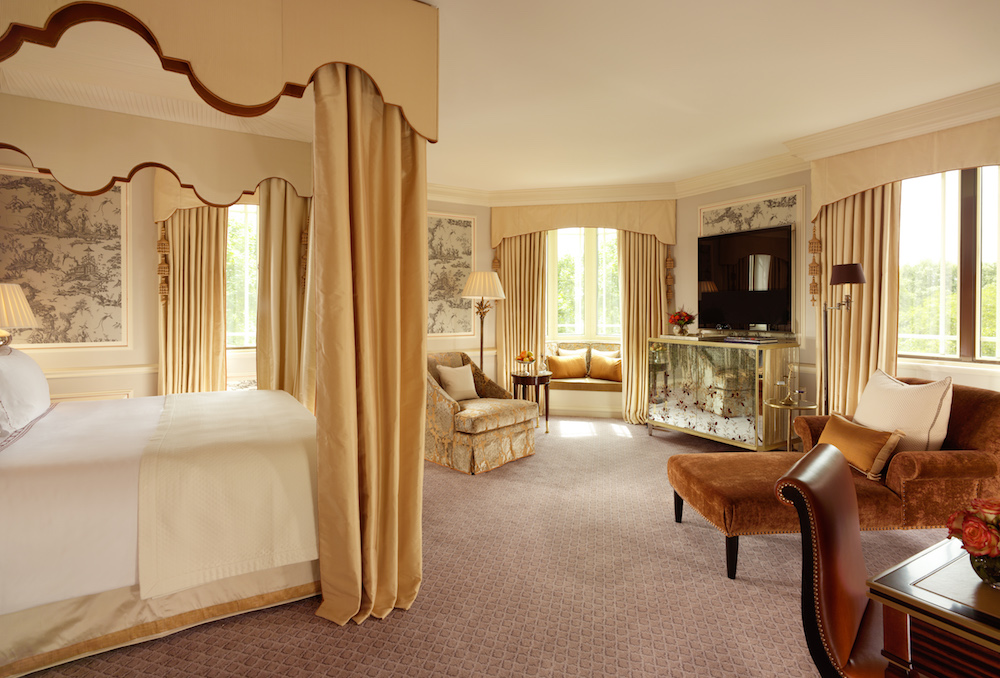 In 2002, the hotel underwent a multi-million pound refurbishment with an all-encompassing renovation of guestrooms and suites, including the addition of a custom-built, high-tech entertainment and business console in each guestroom and a remarkably advanced telecommunications system. 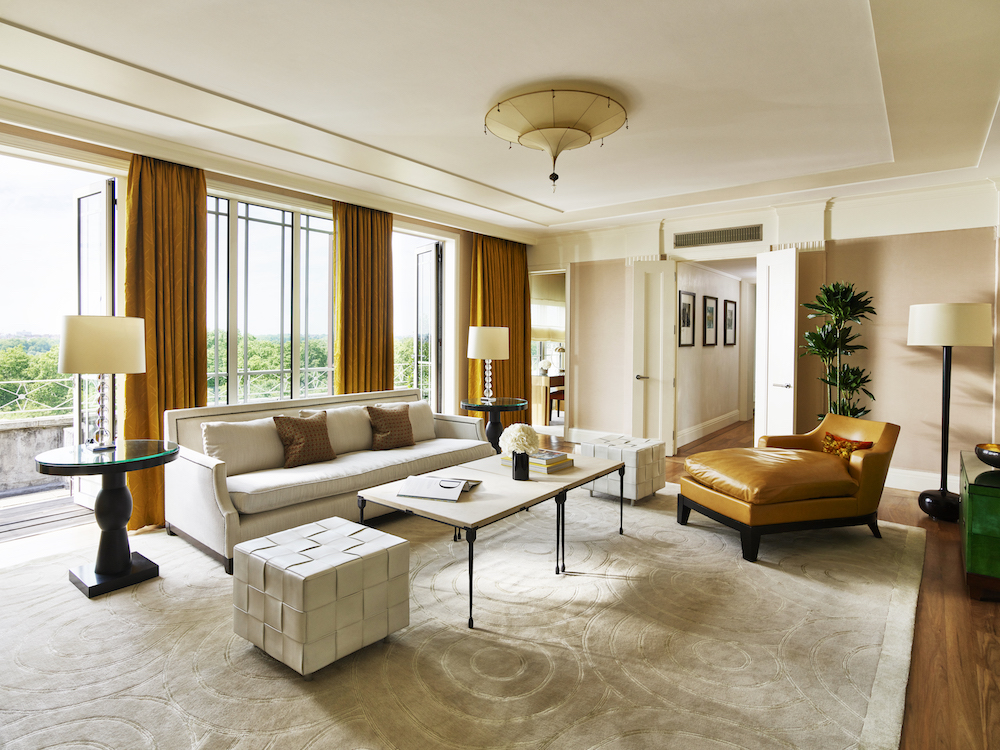 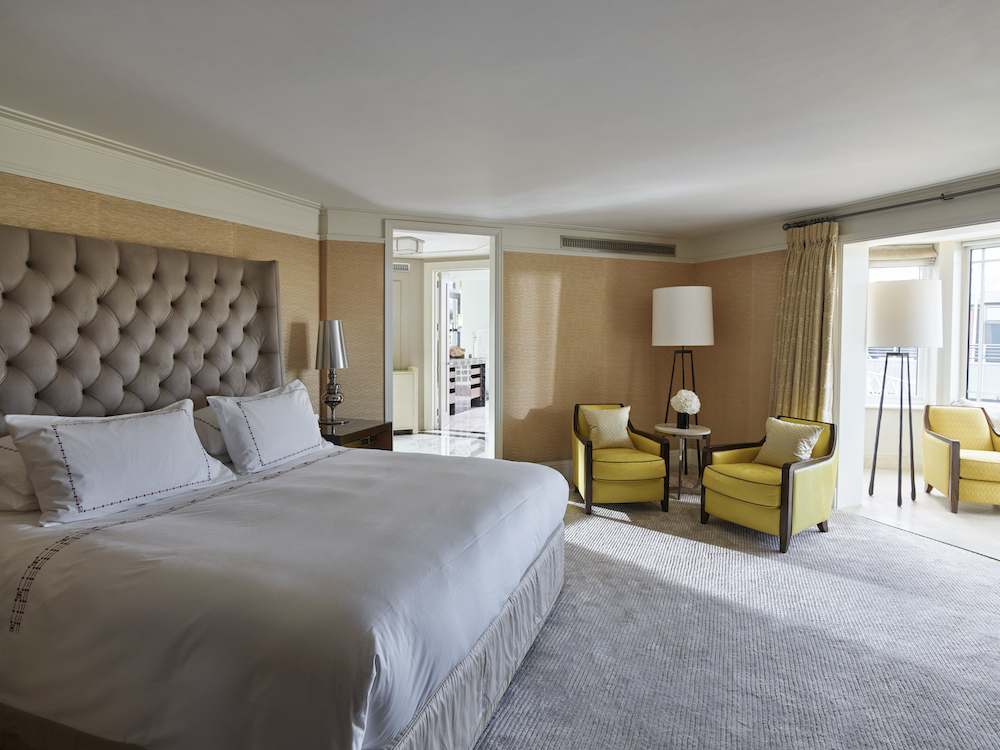 In 2007, award-winning design firm Alexandra Champalimaud, design studio that created the interiors for Raffles Singapore, The Carlyle and Monkey Island Estate, was given the responsibility to refurbish a handful of the property’s most prestigious suites: The Audley, Terrace and Harlequin Penthouses. And with the studio’s ability to effortlessly transform these areas to become tech-savvy yet timeless abodes, the design plot for The Dorchester thickened and a new era for the hotel was born. Whilst these suites stayed true to the hotel’s classic English residential style, the design within them fused contemporary comfort with timeless glamour. 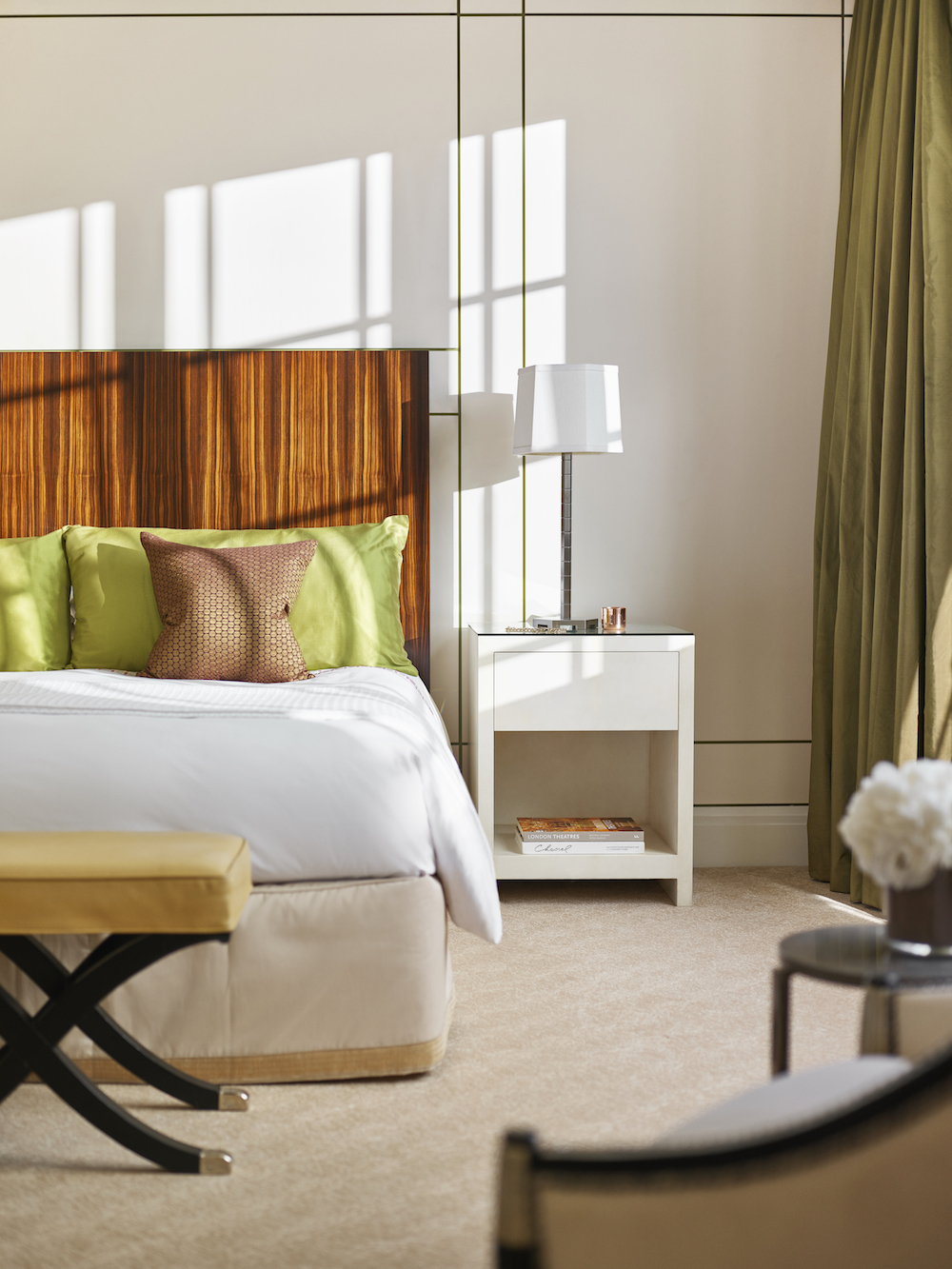 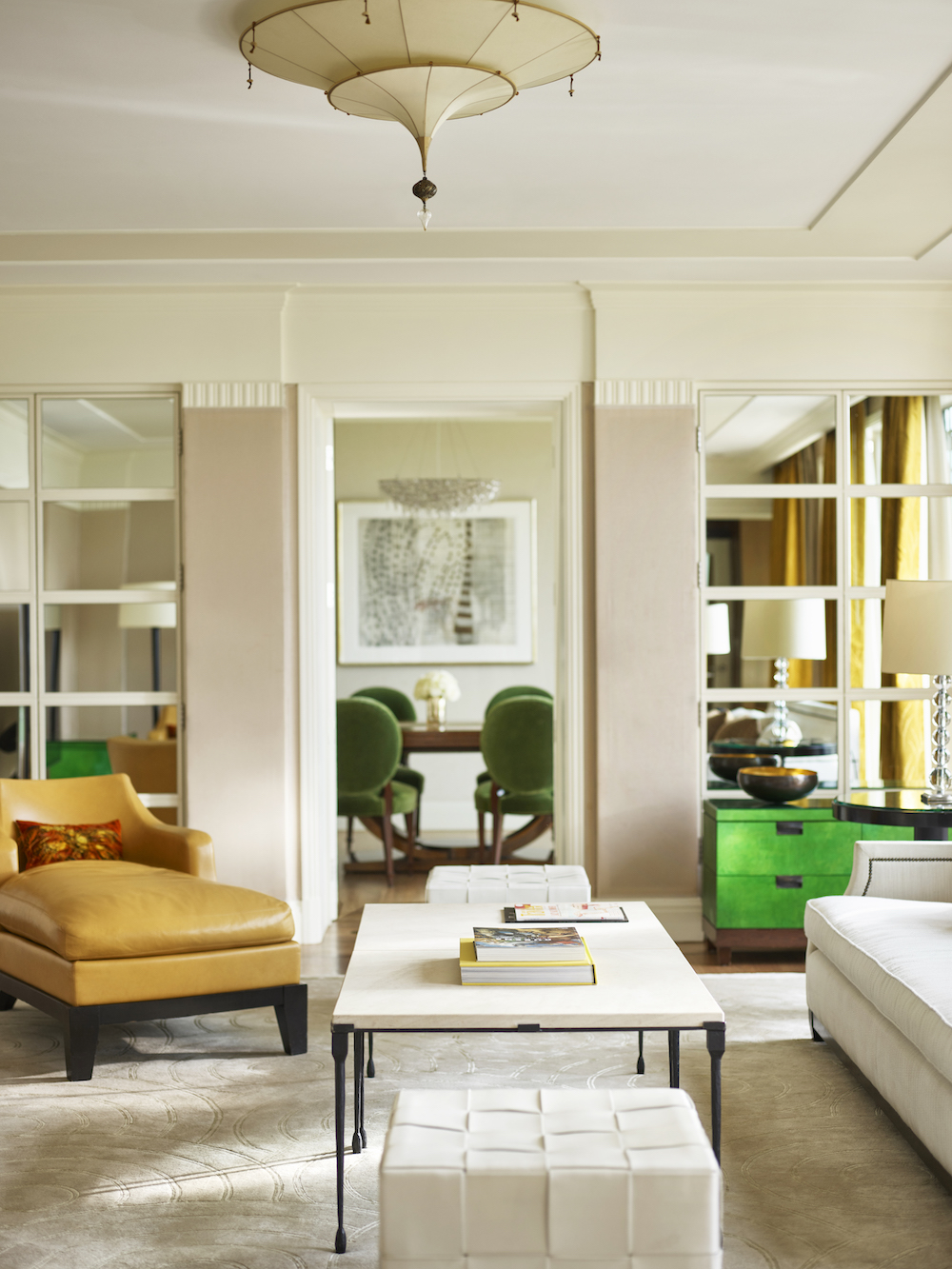 In 2012, Champalimaud Design returned to sensitively renovate a further 22 suites. As well as redesigning the bedrooms and living areas, the design team also remodelled the statement marble-flooded bathrooms, which feature a separate stall shower with large drench shower head and what are said to be London’s deepest hotel bathtubs. 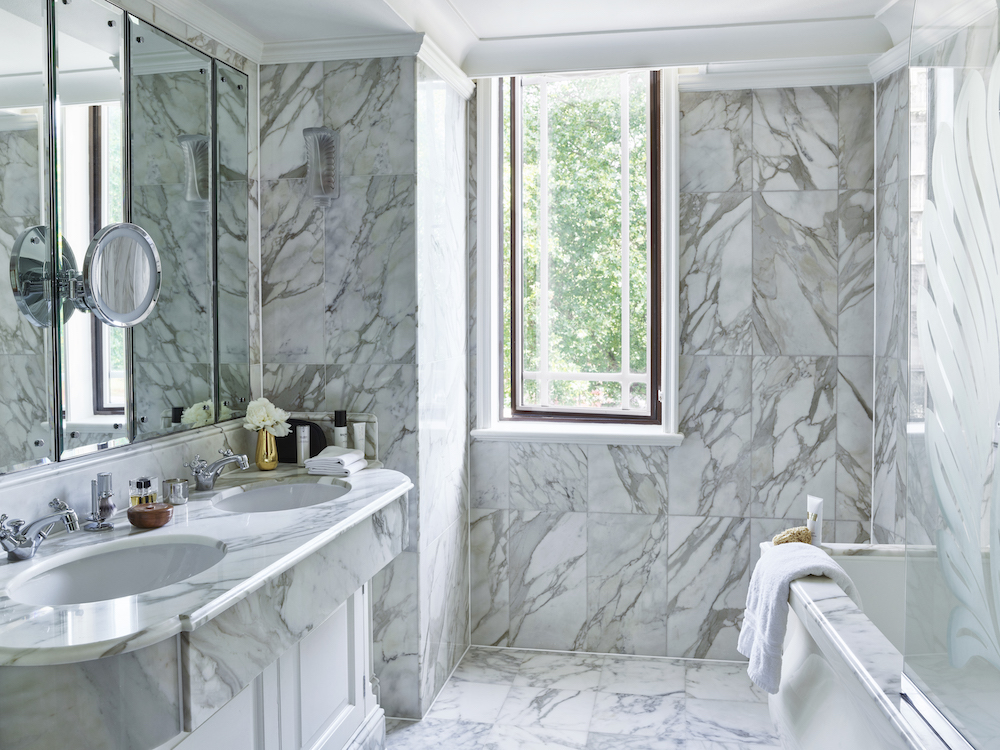 Having now secured landmark status, The Dorchester’s majestic glow is physically protected from change. In terms of its secret to remaining relevant nine decades since first opening to the world, the answer is perhaps unclear. What is transparent, however, is the hotel’s ability to evolve with meaning into modern times while also retaining and celebrating the building’s history, which has become its legacy. 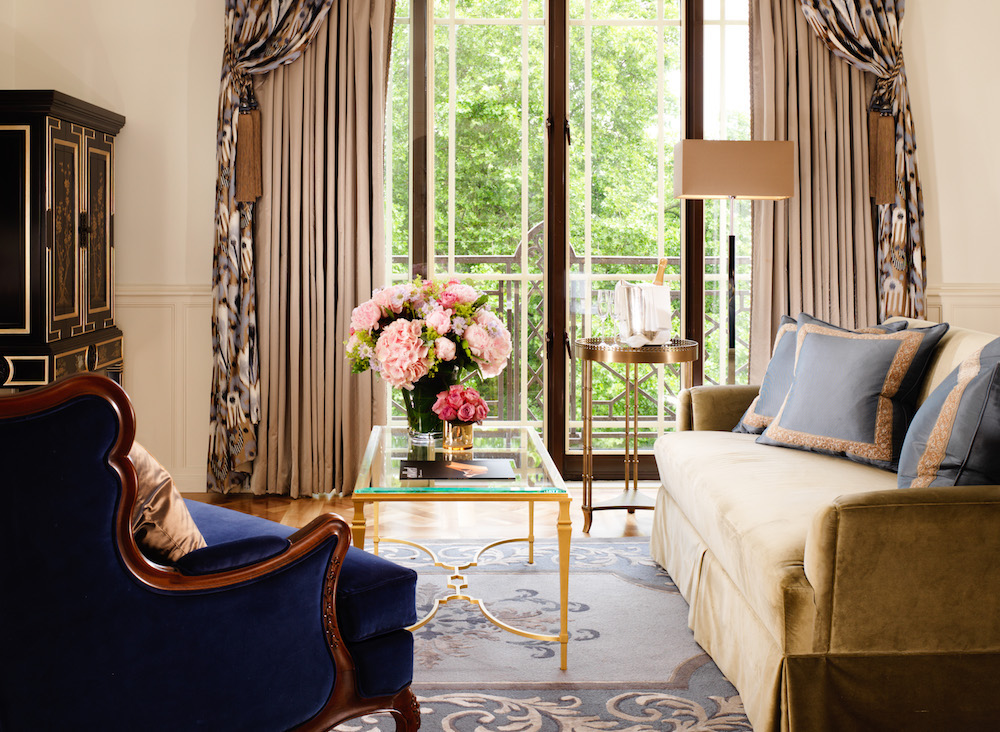 Image caption: The living room inside The Belgravia Suite | Image credit: The Dorchester 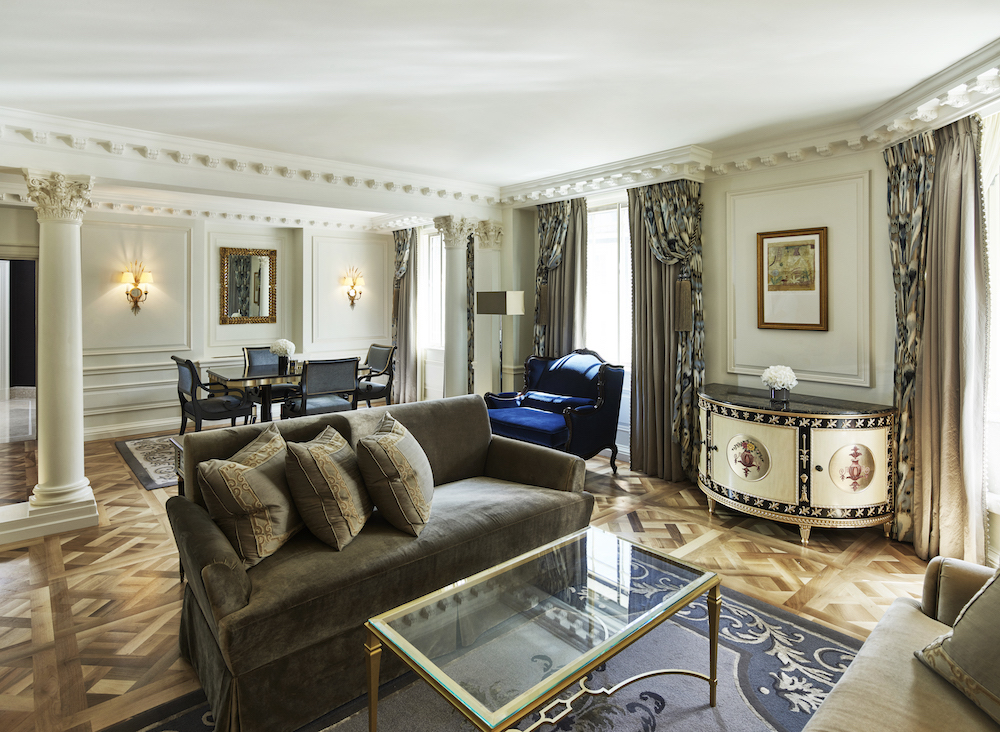 Image caption: The living room inside The Mayfair Suite | Image credit: The Dorchester

What’s more, by consistently choosing style over fashion, The Dorchester remains a much-loved and integral part of history in British hospitality, and stands as proud today as it was in 1931 as one of London’s most refined headline acts.