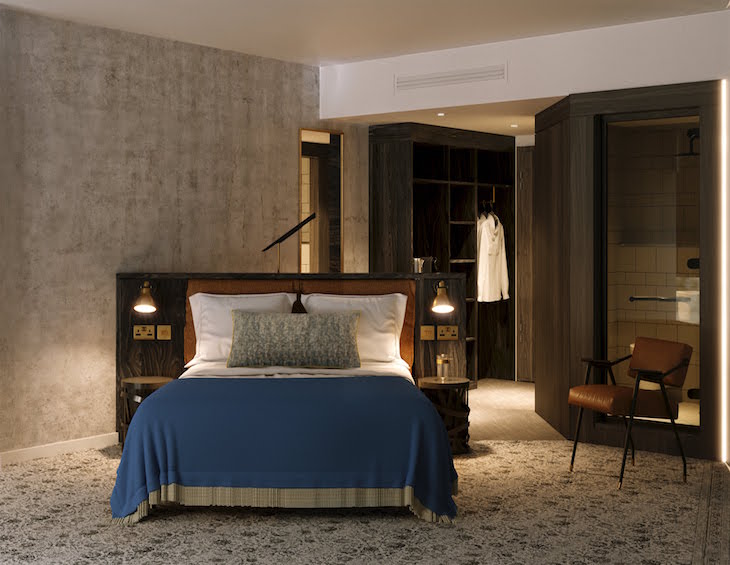 Designed by Squid Inc – the team behind renowned Hotel Gotham – the long-awaited Hotel Brooklyn is scheduled to open in February 2020. The 189-key hotel is inspired by the New York Borough and chosen for its resonating similarities to Manchester, in terms of its buzzing industrial growth, as well as its strength of identity and culture.

The hotel will pay homage to Brooklyn’s history from early 20th century to the present day, with the inclusive design of the hotel being overseen by Motionspot, the UK’s leading accessible design company. Positioning itself as Manchester’s most accessible hotel, Hotel Brooklyn will be a trailblazer in championing accessible, sexy and modern design for all.

“We believe Hotel Brooklyn is a perfect fit for Manchester” – Robin Sheppard, Chairman of Bespoke Hotels

Squid Inc’s starting point was to create a distinctly Mancunian destination that resonated with the characteristics of its counterpart, Brooklyn: the sense of neighbourhood, the grittiness of its culture and edginess of its people. Brooklyn residents, from Mel Brooks to the Beastie Boys, have helped inspire this vibe.

“It was an honour to work with Bespoke Hotels again on creating another iconic Manchester hotel with a strong identity and character,” said Olly Redfern, Lead Interior Designer of Squid Inc. “Weaving the lines between Manchester and Brooklyn is a bold and inspirational project that draws many parallels and it was incredibly fun to do, partnering with some of the best local suppliers to create the finished look.”

Beautiful Victorian brownstone buildings have become icons of both Brooklyn and Manchester and Squid Inc have been driven by the ambition that the architects of Brooklyn showed when repurposing an area which had fallen out of favour, transforming it into one of the most exciting parts of town.

The brownstone idea is explored from the moment guests enter the hotel, with the industrial feel of the architecture softened by the lobby interior and designed to recreate the sense of journeying down a Brooklyn avenue, with brick stone and trees lining the walls. 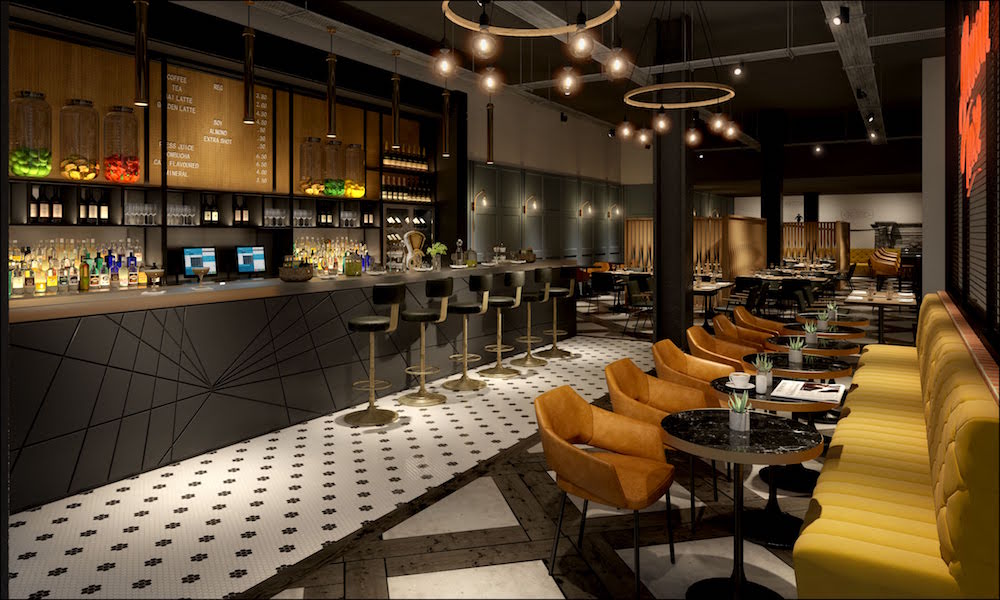 Beyond the lobby is a flight of wide-paced steps, designed to provide a communal space to hang-out – paying homage to the iconic stoops of Brooklyn, and the sense of community these have inspired in film and art.

The Snug is designed to be a playful, contemporary twist on the traditional.

Harking back to historic Victorian brownstone buildings and their expansive drawing rooms, The Snug is designed to be a playful, contemporary twist on the traditional.  This space is cosy and intimate – a sanctuary from the hubbub – with an open fireplace and a record player spinning vintage records from the Manchester music scene.

“Bathrooms have been cleverly-angled to allow their back walls and semi opaque windows to look out across the guestroom.”

The aesthetic of the 189 guestrooms has been inspired by Brooklyn’s loft spaces, peppered with immaculate features that favour quality and high-spec finishes. Beds have brass adornments, while Turkish rugs have been designed to contrast with the concrete floors. Bathrooms have been cleverly-angled to allow their back walls and semi opaque windows to look out across the guestroom, while street art wall features finish off the bold design direction. 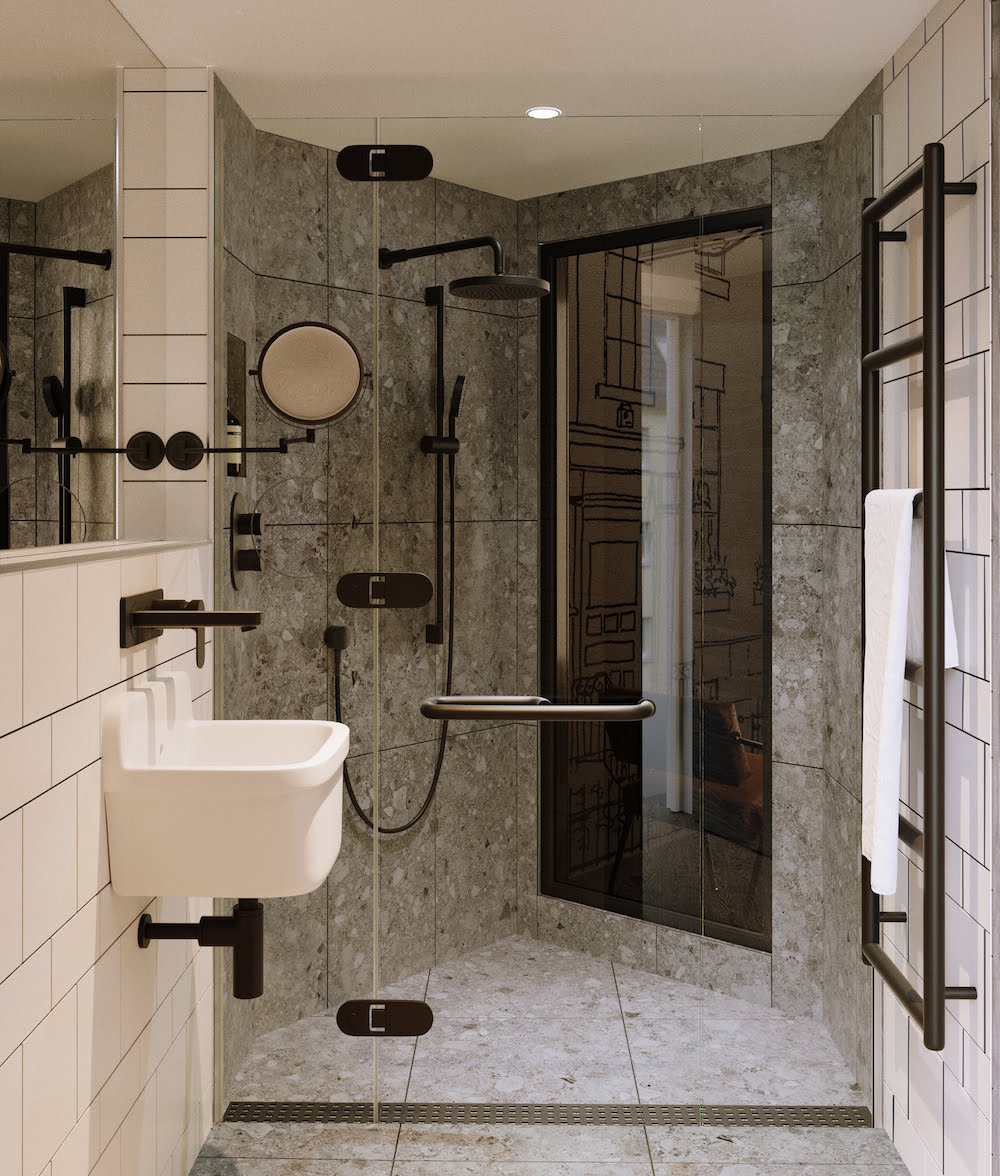 In addition, the hotel features 18 dynamically designed accessible bedrooms, each of which has been stylishly designed to complement the aesthetics of the hotel. “Accessible accommodation at Hotel Brooklyn features subtle details like basins with integrated hand grips, removable matt black grab rails, accessible bedroom storage and a hidden ceiling track hoist”, said Ed Warner, Founder & CEO of Motionspot. “We hope this high level of attention paid to inclusivity will make Hotel Brooklyn one of the most sought-after venues for guests of all abilities.”

Hotel Brooklyn’s bar and restaurant, named Runyon’s after Damon Runyon, an American writer renowned for his depictions of Brooklyn characters, will present a diverse menu showcasing European and American influences. Paying respect to the remarkable industrial craftsmanship of the Brooklyn Bridge (immortalised in many iconic images), Squid Inc have taken the bridge’s tension lines as inspiration, giving Runyon’s a flavour of downtown Brooklyn – a mix of gangster and quality, purposeful engineering – adding a desirable irregularity to proceedings. 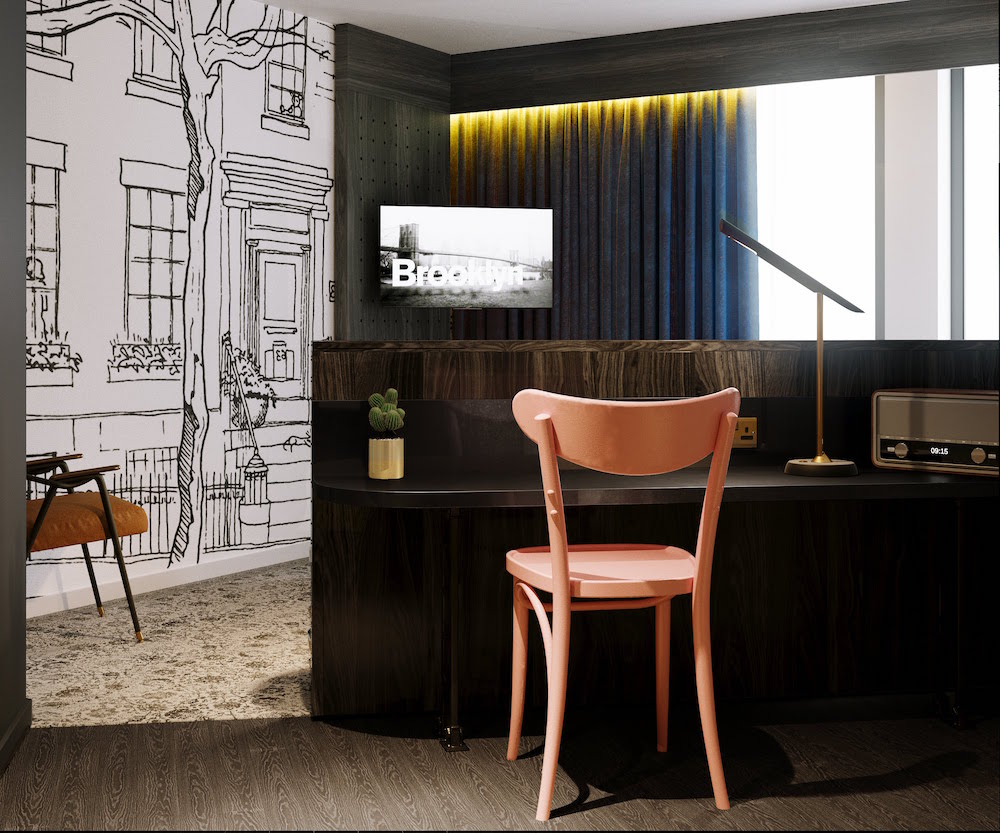 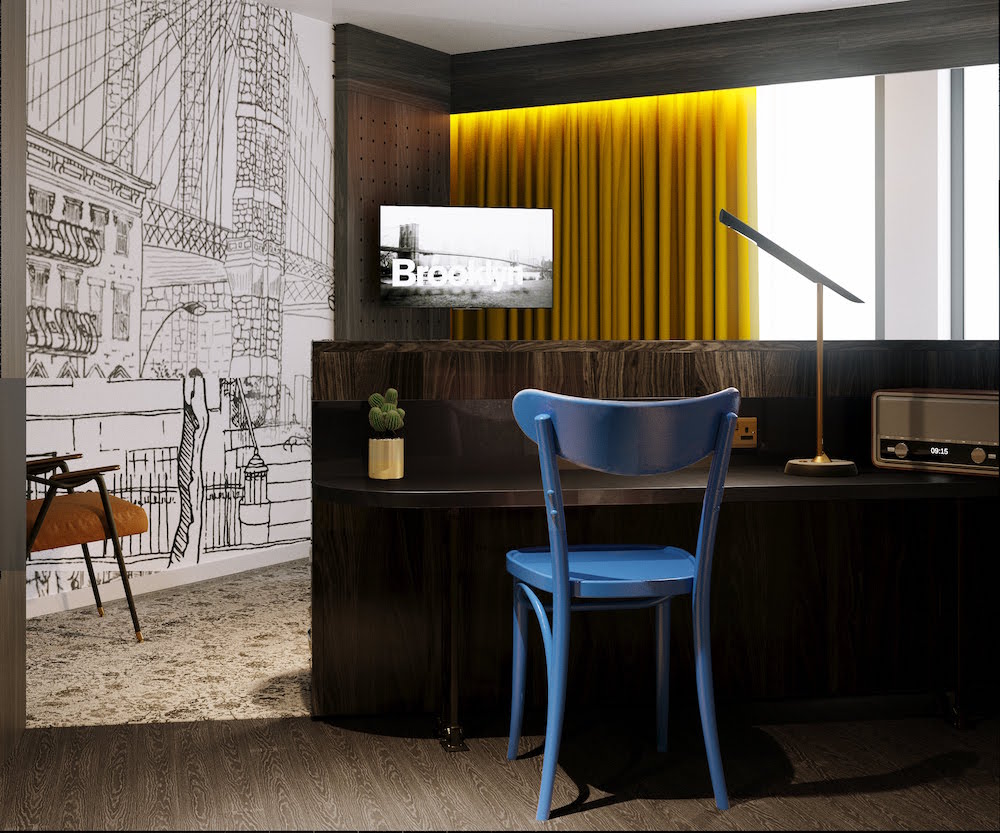 On the top floor of the hotel, Salvation is the hotel’s dedicated events bar, featuring exposed brick work, pop art and neon lights to create a lively destination bar for the UK’s preeminent Northern city.

“We are thrilled to have secured this fantastic site in the heart of Manchester’s historic industrial thoroughfare of Portland Street”, commented Robin Sheppard, Chairman of Bespoke Hotels. “We believe Hotel Brooklyn is a perfect fit for Manchester, not solely in terms of the architectural grandeur and convenience of its location, but the abundant character and feistiness of the city. Portland Street is experiencing a regeneration as the hotel strip of the city”. 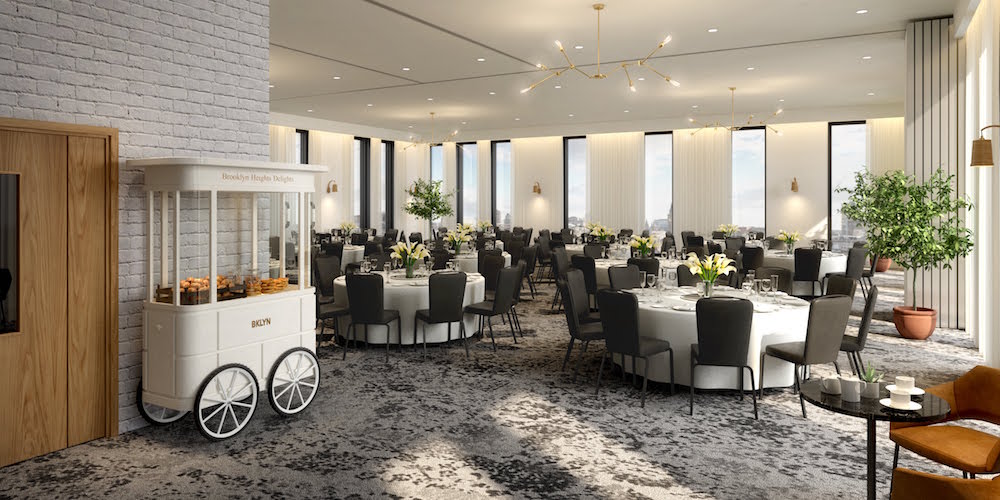 Throughout the hotel, regional suppliers have been selected wherever possible. Deanhouse Interiorswere commissioned to fabricate the entire fit-out package, including cased goods from wardrobe and bedroom fittings, to the reception pods and 9th floor bar counter. Alongside this, PS Interiors sourced several key furniture pieces throughout, including the retro styled bedroom chairs, while sourcing New York street art was overseen by Elegant Clutter Artwork. In addition, Manchester-based The Knot Collective were commissioned to design two bespoke rugs for the hotel’s public spaces.