The Reykjavik EDITION arrives in Iceland 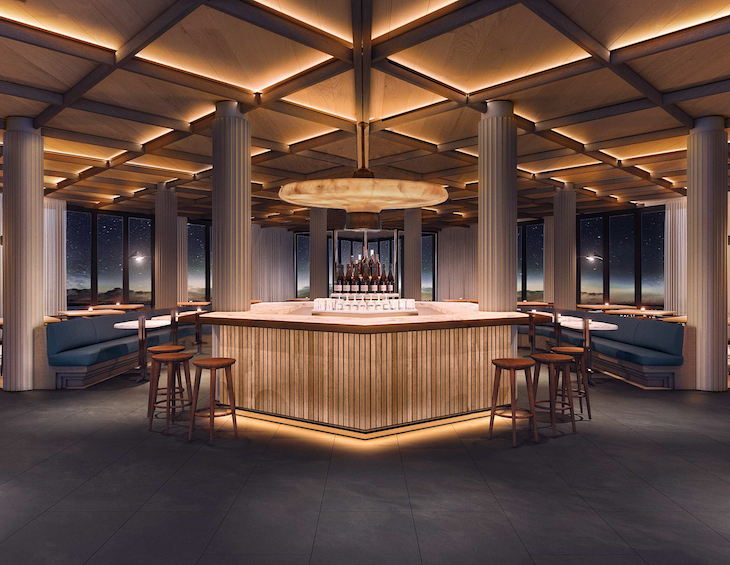 Opening in preview on November 9 2021, The Reykjavik EDITION is expected to set a new hospitality standard – one that matches the natural magnificence of the destination –  as Reykjavik’s first truly luxury hotel experience. The 253-key hotel combines the best of the Icelandic capital with the personal, intimate and individual experience that the EDITION hotel brand is known for. Melania Guarda Ceccoli writes…

Cool cafes, culinary hotspot, an epic music scene and a vibrant nightlife: we are in Reykjavik, the capital of Iceland – land of hot springs, mineral waters and natural fjords. With typical finesse, the long-awaited arrival of The Reykjavik EDITION further cements EDITION Hotel’s uncanny ability to land in just the right place at the right time. Opening this November, The Reykjavik EDITION will shelter a personal, intimate and individual experience that the EDITION hotel brand is known for. The result is a spirited and sophisticated urban hub with 253 rooms, an outstanding line-up of bars, signature restaurants and nightclub and, in true EDITION hotel style, the introduction of a new kind of modern wellness concept.

“More so than any other place in the world, it’s a real opportunity to get in touch with earth and nature.” – Ian Schrager, Founder, EDITION Hotels.

The Reykjavik EDITION hotel is the first true luxury brand entering the market which has facilities and services like no other. First appearing on the map when American chess grandmaster Bobby Fischer won the World Chess Championship in Reykjavik in 1972, Schrager, who was following the event at the time, says he was taken aback by the country’s unspoiled, natural beauty.  “In Iceland, you’re getting to see things you won’t see anywhere else,” says Schrager, the visionary pioneer of the boutique hotel concept. “More so than any other place in the world, it’s a real opportunity to get in touch with earth and nature and we’re proud to further expand the EDITION brand in an incredible place with an incredibly exciting hotel that gives you a true sense of place.”

From the outside, The Reykjavik EDITION hotel is a striking addition to this downtown neighbourhood. Its ebony façade of shou sugi ban timber has been charred to be blacked using an ancient Japanese technique, and blackened steel frames is a clear nod to Iceland’s dramatic lava landscape. 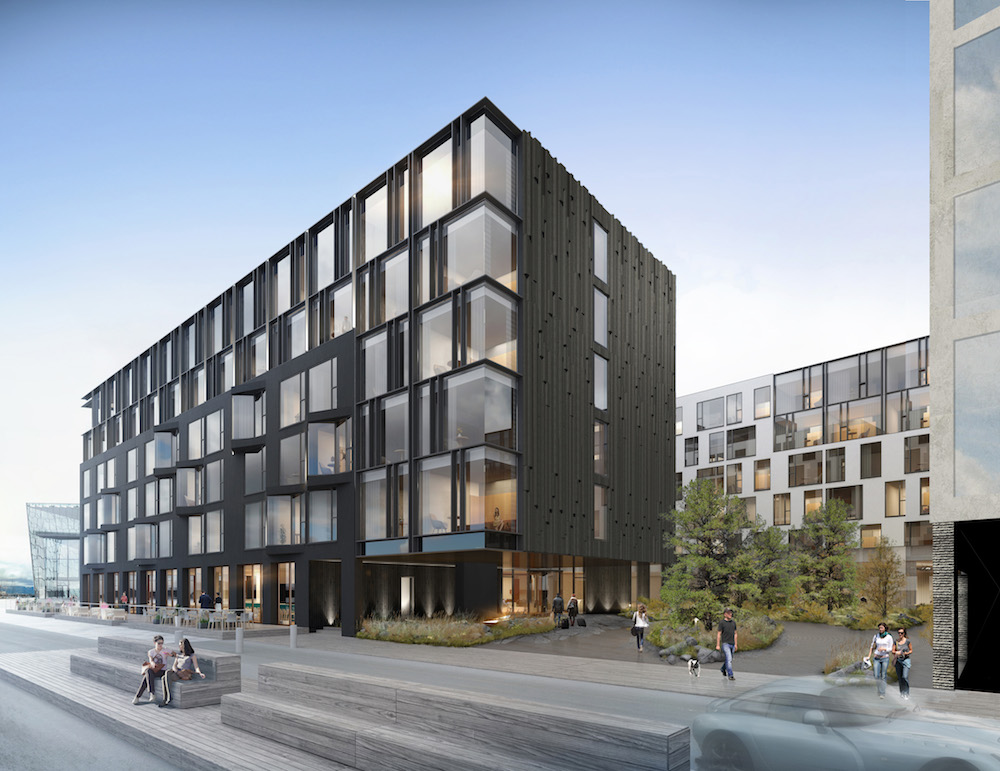 The double-entrance lobby is accessible either from the pedestrian Harpa plaza, or the harbour. The latter features a canopy, its underside illuminated by 12,210 glass LED nodes.

As with all EDITION hotels, the lobby is a dynamic, social space that subtly reveals a sense of place and sense of time. Here, basalt stone – or volcanic rock – is prominent, appearing on the flooring, which has been laid with an intricate pattern inspired by Icelandic geometry, and a standout sculptural reception desk. The lobby lounge features a central open-flame fireplace which is the hearth of the space, surrounded by seating and a collection of custom-made furniture in intimate seating groups, such as the JeanMichel Frank-inspired armchair in white shearling and Pierre Jeanneret-inspired chairs in black velvet.

Inside the entrance of the hotel, ISC has collaborated with local artisans to create a totem sculpture of stacked, columnar basalt slate from the south of Iceland. Rising close to four meters high, the sculpture’s inspiration is found in the traditional Cairns that act as landmarks across Iceland’s countryside. Dramatically lit by both electric and candlelight and surrounded by a basalt bench, the totem is layered with lush black sheepskins, black damask and silk pillows, becoming a gathering place to see and be seen, at the centre of the lobby. Right next to this, inspired by the spectacle of the aurora borealis (Northern Lights), ISC has video mapped the Northern Lights and has created an immersive, three dimensional and atmospheric digital artwork of beautiful green and purple dancing waves. Located in the lobby, it stirs a reaction and emotion, similar to witnessing the natural phenomenon in the Icelandic night sky…but in the comfort, warmth, and intimacy of the lobby and lobby fireplace.

Accessible from the lobby, the ground floor is also home to Tides, the signature restaurant with private dining room, and café with homemade baked goods, and Tölt, an intimate bar that takes its cues from The London EDITION’s award-winning Punch Room. Tides, which has an outdoor terrace and its own waterfront entrance, is helmed by Gunnar Karl Gíslason – the chef behind Dill, Reykjavik’s much-celebrated New Nordic Michelin-starred restaurant. In the mornings, breakfast is a fresh, healthy mix of clean juices, pastries, fruit, cereal and skyr (Icelandic yoghurt) supplemented by an à la carte menu of hot dishes and a selection of open-face sandwiches. For lunch and dinner, Gíslason serves modern Icelandic cuisine, with subtle hints of traditional cooking methods, focused on seasonal local products and the highest quality of global ingredients mainly cooked over an open fire. Alongside an extensive global wine list, expect dishes such as a vertical salad topped with fried oyster mushrooms aged soy sauce and roasted almonds, whole Arctic char stuffed with lemon, dill and garlic butter, baked Atlantic cod, grilled potatoes, mixed herbs and butter and lamb shoulder braised and slowed grilled, pickled onions mint and apples, and for dessert, Tides carrot cake, buttermilk ice-cream, carrot and sea buckthorn jam, with roasted caraway oil. There is also a weekend brunch menu and three nights a week, The Counter, overlooking the theatrical open kitchen, will serve an eight-course tasting menu with wine pairings for up to 10 people. Meanwhile those looking for something more casual can pop into the bakery and café for a coffee and a selection of freshly baked crowberry scones to delicious sourdough or rye bread sandwiches where guests can dine in or take away.

On the opposite side of the lobby, Tölt – named after the unique fifth gait Icelandic horses are best known for – is a cozy bar.

The Roof is located on the hotel’s seventh floor and offers panoramic mountain, North Atlantic Ocean and old town vistas. A versatile space that can be divided by a glass door for private events allows it to be the best place from which to enjoy the endless bright summer evenings as well as the magical northern lights in the colder months. Floor-to-ceiling glass doors open onto a large wrap-around seasonal outdoor terrace, scattered with comfortable seating and a large fire pit, while the slick all-black interiors create a discreet background that doesn’t detract from the views. Here, the casual vibe is supplemented by a small menu of comfort foods like grilled flatbreads, toasted sandwiches and fresh salads. The guestrooms and suites have been designed as warm retreats, each with floor-to-ceiling windows and some come complete with an outdoor terrace. From its prime corner spot on the 6th floor, the one-bedroom Penthouse Suite – with its own private terrace has magnificent harbour, Harpa and mountain views that are further complemented by bright, light-filled elegant interiors of plush custom furnishings in creamy oatmeal tones. The Penthouse Suite is also accessorised with an oversized bathroom with Italian white marble and a central fireplace too.

Also, on the lower ground floor is a gym. Alongside three treatment rooms, a hammam, steam room, sauna, and plunge pool which offers hydrotherapy, there is also a central lounge with a spa bar, which by day serves a fresh healthy menu of post-workout Viking shakes, champagnes and, delicious moss vodka infusions alongside snacks like volcano bread with black lava salt.