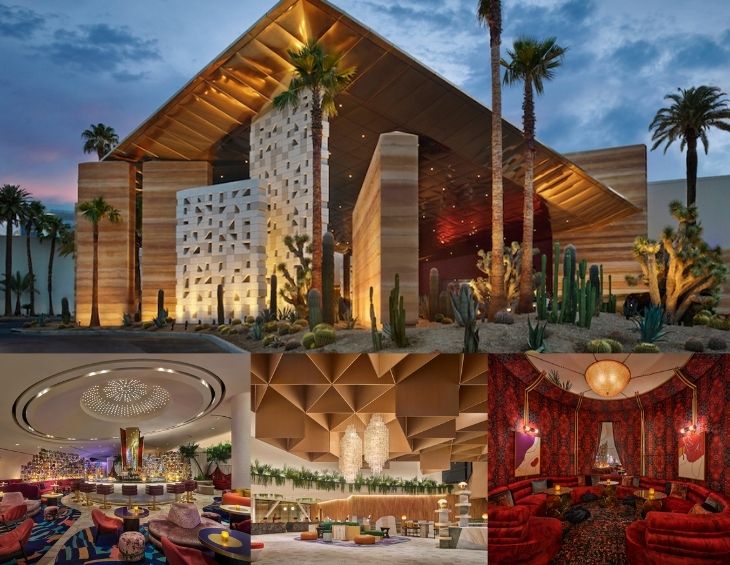 Leading New York based interdisciplinary architecture and design firm Rockwell Group, which recently completed the design scheme inside Moxy South Beach, has unveiled its design of the interiors of Virgin Hotel’s debut property in Las Vegas, which is a re-conceptualised and revitalised property in the former Hard Rock Hotel.

The design studio’s authentic ability to push boundaries to disrupt and challenge conventional hospitality and design in a meaningful way is probably the reason why it has been developing Virgin’s signature playful spirit since 2015, when the firm designed Richard Branson’s first Virgin Hotel in Chicago in 2015.

Naturally, therefore, Rockwell Group was appointed to design the ‘Virgin Spaces’ that surround the main casino, including a new porte cochère and entry experience – The Junction – as well as a check-in area for guests, the Commons Club and the Commons Club Restaurant and the Shag Room. The studio also designed two additional bars within the main casino and transformed the lobbies throughout the hotel. 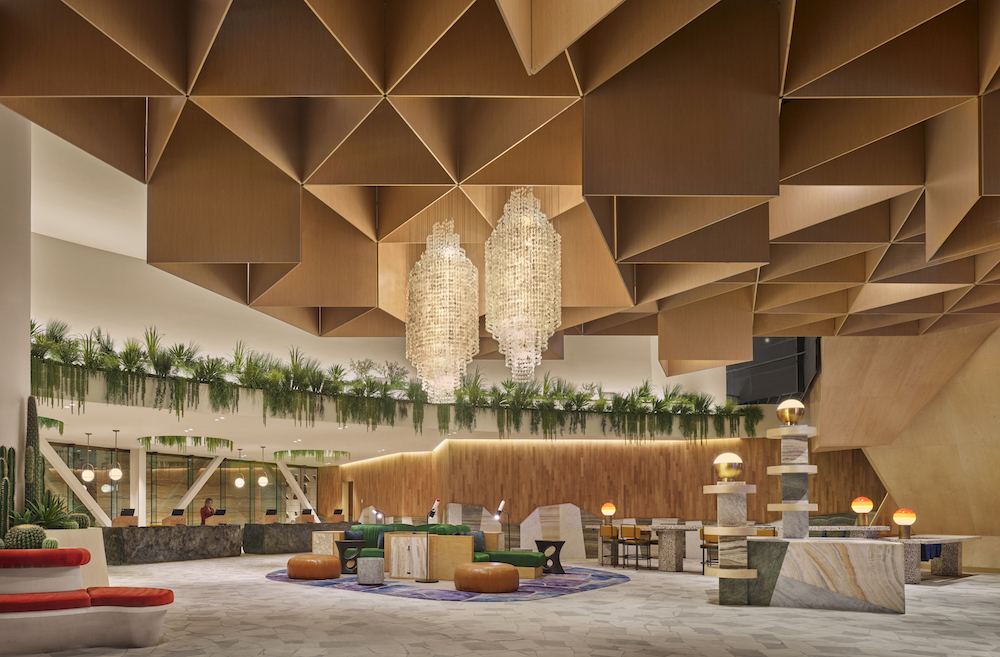 The hotel, which first entered our radar earlier this year, is situated a few miles away from the iconic Strip, and Rockwell Group chose to accentuate this separation by creating a luxury destination that taps into the wider context of the desert landscape with pure forms and sculptural moments. The public spaces within the hotel reference desert modernism and, wherever possible, blur the lines between indoors and out, with glazing and an outdoor terrace. 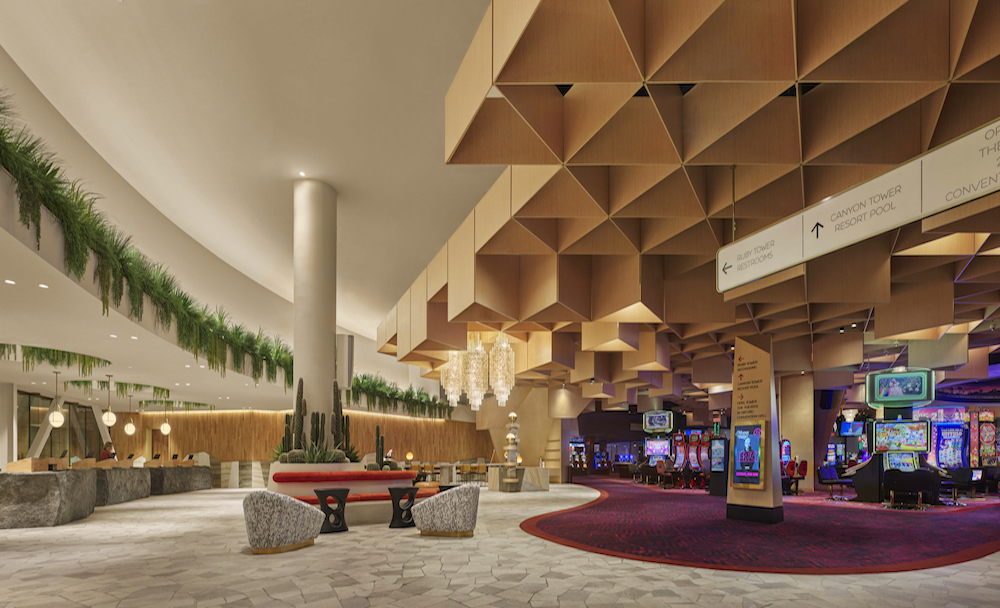 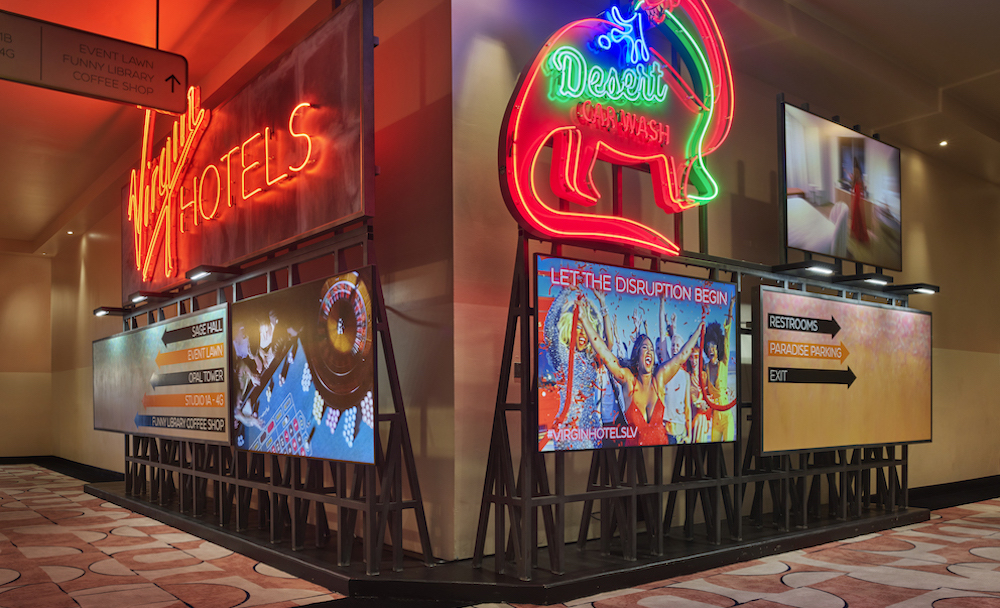 With limited creative inspiration in a city that was effectively built in the wilderness (a strong part of its allure, of course), the design team envisioned taking guests on an adventure along a desert highway, spotted with natural wonders and follies – a clear homage to the city of Las Vegas and its surrounding desert landscape. The neutral, natural material palette includes flagstone flooring and rammed earth walls with pops of Virgin’s signature red, agate stones, and greenery. The result is an inclusive series of lounge and dining spaces that invite guests to linger and explore.

A new entrance welcomes guests with monumental, rammed earth walls, a cactus garden planted in a dune-like setting, and a striking geometric breezeblock wall. The dramatic centerpiece of the porte-cochère is an angular canopy clad in reflective gold metal, while red tiles frame the entry portal, signifying the Virgin brand and contrasting with the neutral rammed earth that surrounds it.

The Junction – the main lobby, gathering, and lounge space – announces Virgin Las Vegas’s departure from the Vegas norm and helps guests orientate themselves. A plywood, coffered, hung ceiling undulates throughout the space creating an impressive sculptural setting with light wells that glow at night.

Alongside the Junction, the design team have designed a more private space – the Harmony Lobby, which houses a VIP check-in and a bar. A long communal library table in front of a fluted wooden screen features a record player and earphones, inviting guests to linger, surrounded by a central mirror-clad ceiling cove that unites all the spaces and features acrylic chandeliers that seem to float above. 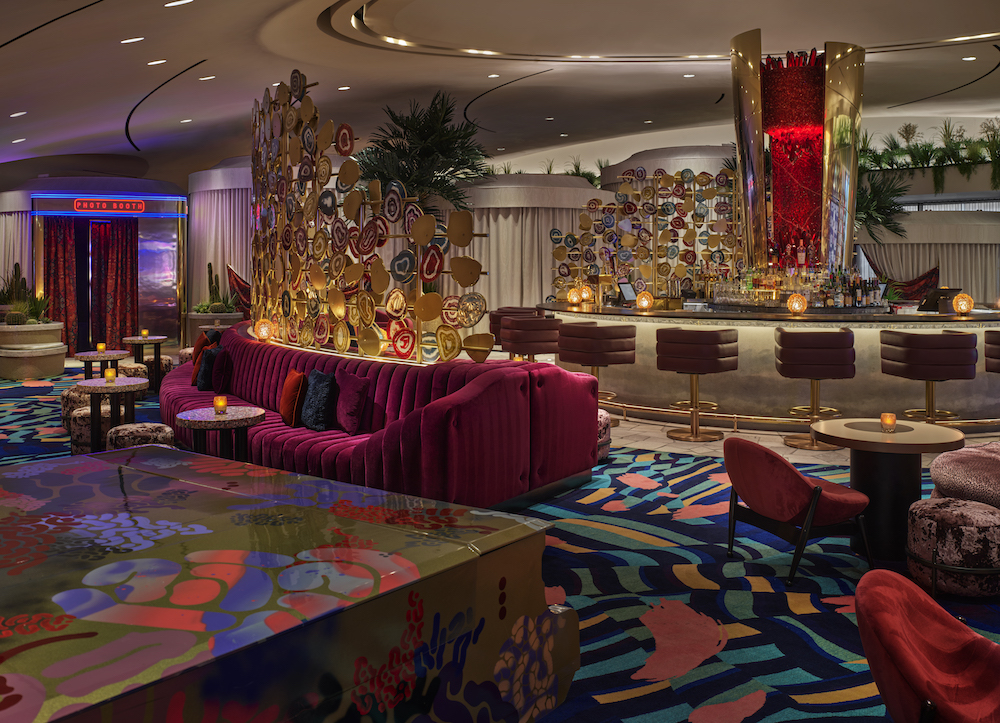 Extending from the lobby, the Commons Club features a bar surrounded by a casual dining area that spills out onto an expansive terrace. The circular bar sits under a sculptural dome that terminates in a 20-foot diameter skylight with a diffused pattern. The bar die is composed of crushed, coloured glass inspired by rammed earth, while the back bar features a circular, sculptural tower composed of angular, mirrored panels that surround a glowing crystal centre inspired by cracked earth. Curved metal screens embellished with agates surround the back bar and create a sense of intimacy.

Sitting next to the Commons Club, its namesake restaurant features central banquette seating framed in light-coloured wood that sits under a recessed cork ceiling and pendant lights. Dining tables are made of an unexpected wood chip terrazzo and the seating niches at the perimeter of the restaurant feature art and breezeblock detailing. 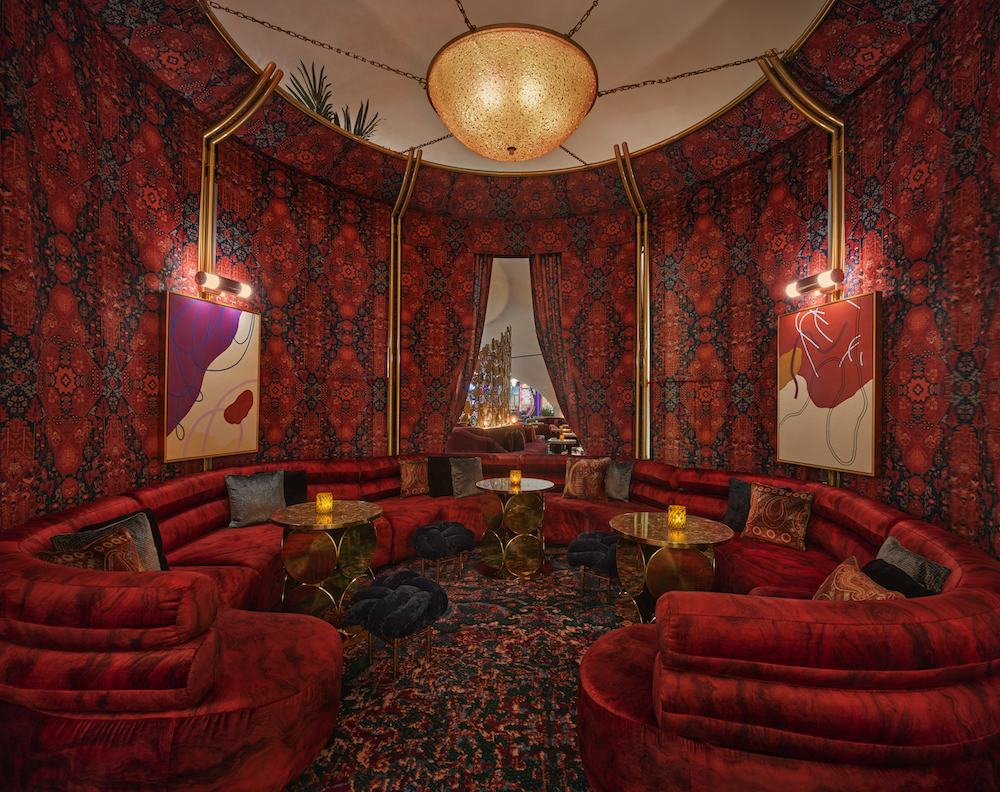 The Shag Room, a casual yet sumptuous bar and lounge is accessed through a speakeasy photobooth entrance and features plush soft seating and banquettes in shades of purple and red upholstery with shag carpet surrounding a conversation pit. Swooping Persian carpets hang from the ceiling, and the main bar is hidden behind dramatic drapery.

Elsewhere in the hotel, the team at Rockwell Group have made interventions to the floor and ceiling landscapes in the casino area, with a red carpet design that mimics curving tracks in the sand dunes and ensures design continuity throughout the hotel and the casino.

Meanwhile, the guestrooms and suites were designed by Los Angeles-based Studio Collective, which has previously completed projects inside Hotel June, Hotel Figueroa and The Landsby Inn. 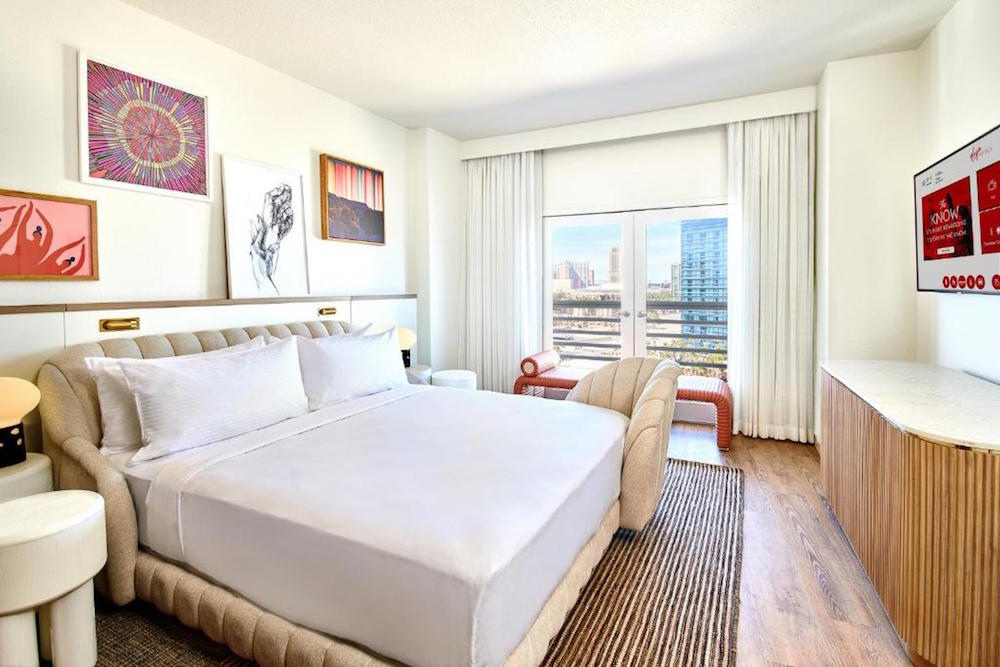 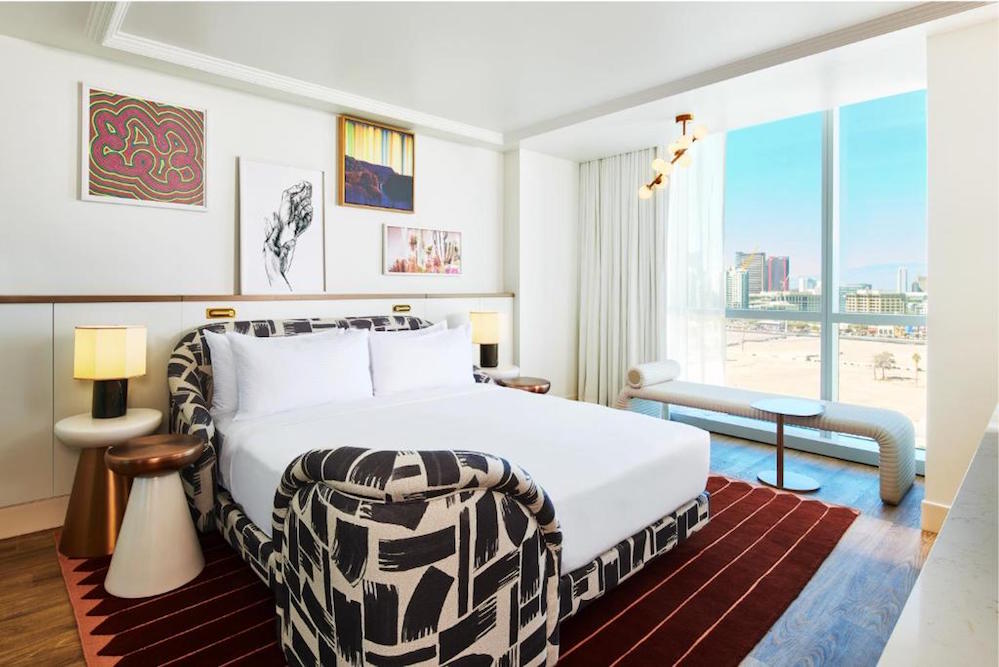 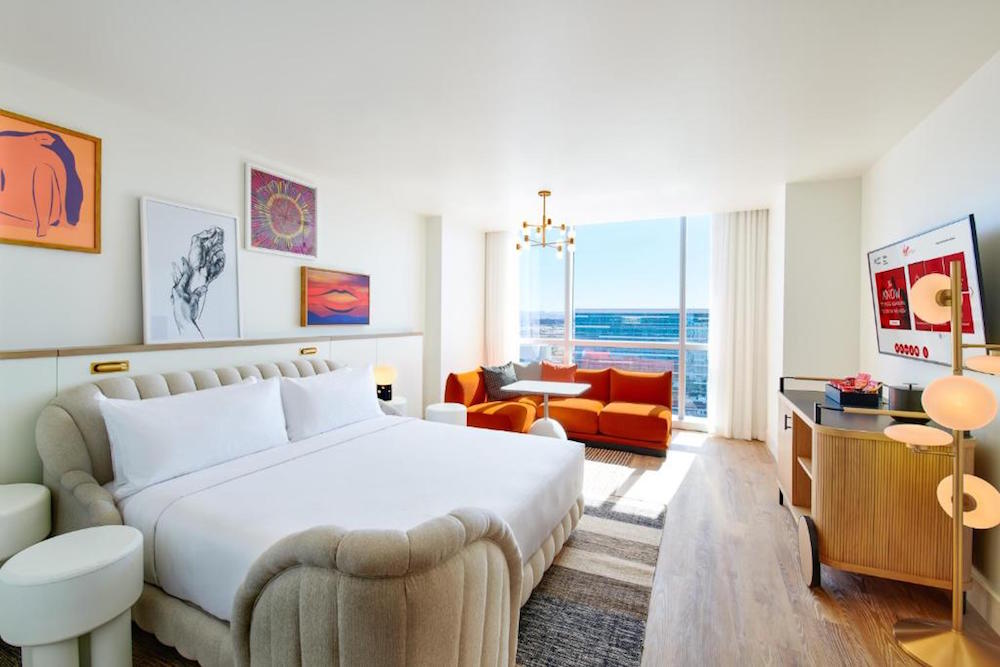 The rooms inside Virgin Las Vegas are spread over three distinctive towers – Opal, Canyon and the all-suite Ruby Tower. These spaces manage to balance the vibrancy of Las Vegas yet remain calm and inviting for guests checking in.