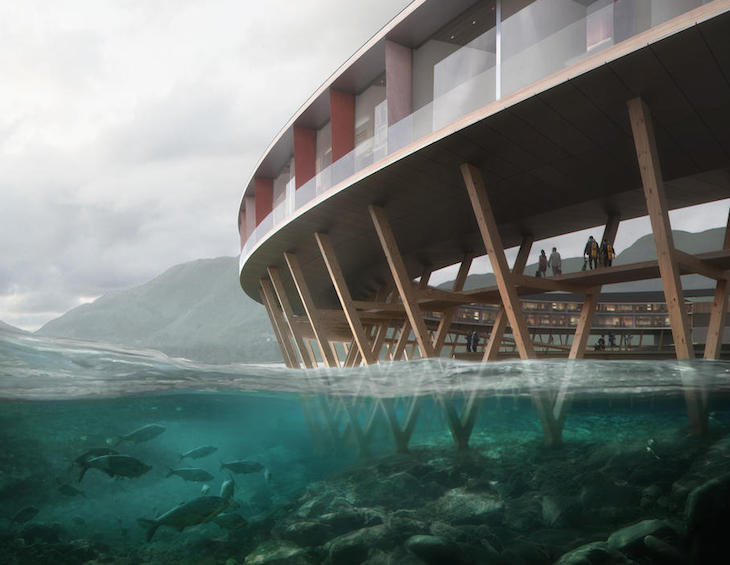 To celebrate this month’s feature of ‘hotel concepts’, editor Hamish Kilburn puts some interesting hotel developments under the spotlight – some more realistic than others – that are currently on his radar…

As with any brief to source new and truly innovative ideas, to find hotel concepts that were really going against the tide I needed to look outside what I already knew leading designers, architects and hospitality experts were currently working on.

Recently, I was lucky enough to sit on the judging panel for the Accor Design Awards, an initiative that was launched by the hotel group in order to celebrate and champion young student designers globally. In doing so, the panel of judges were able to see, from the unmatched perspective of bold, fearless young designers who have not yet made a name for themselves, an unedited landscape of ideas that naturally challenged the conventional approach to design, architecture and hospitality. From hovering hotels to floating vessels, each idea was supported by solutions for the industry moving forward.

Inspired by this year’s shortlist of finalists, I made it my mission to see what other hotel concepts are out there. From space hotels, to floating suites and a plethora of sustainable architecture concepts that will take hospitality into a new era, here’s what I found…

Our first hotel concept to look at in this feature was born out of that awards – and won not only the judges over but also the public. Manon Figuier, Victoire Datchary, Mathéo Maurel, Harold Loquillard from L’Ecole de Design Nantes Atlantique, whose project NOMADish provided an innovative solution that hit the three key goals: overall guest experience, element of surprise and delight, and consideration for social, economic, and environmental responsibility, won the first prize. They also won the Public Choice Award, voted for by the general public via our bespoke online award voting platform.

The concept drawn up by the team of students allowed guests to shelter themselves in their own floating pod, that would allow them also to explore the city and never wake up to the same view twice. In addition to showcasing a new hospitality experience, the team also confronted sustainability by utilsing the power of hydrogen to fuel this approach. 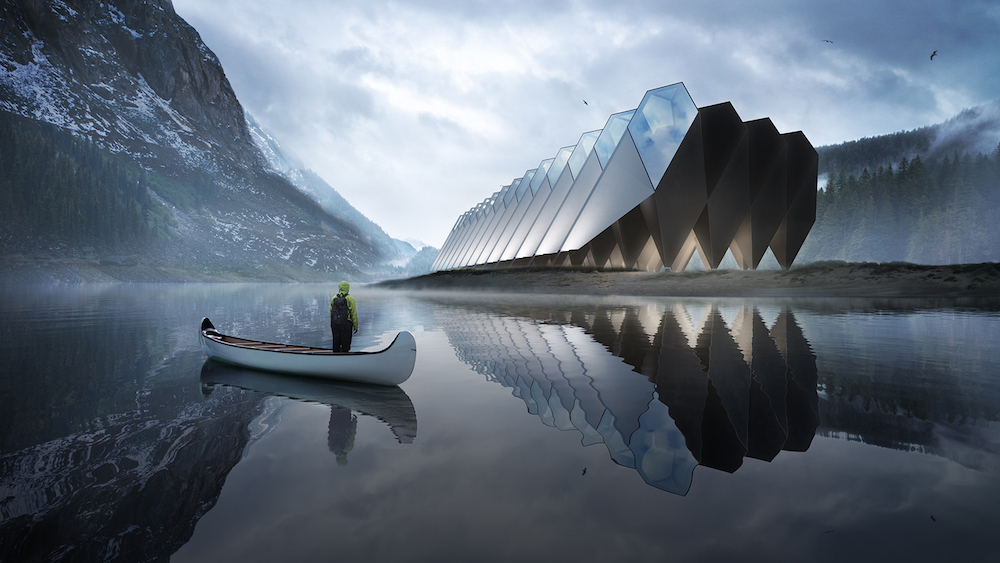 No, the aliens have not landed (not yet anyway). Tetra Hotel is a concept drawn up by David Ajasa-Adekunle who has reimagined the ‘pod’ hotel in such an innovative way. His idea to build Tetra Hotel combined the use of symmetrical rows of rhombus-like geometric ‘pods’ that sit lining the banks of a glacial river in Iceland. According to other reports, every room will feature a multi-storey configuration, starting with a work area on the ground floor, moving through an entertaining space on the middle, and finally a top-floor bedroom and shower situated beneath an enormous skylight.

The 99-key Svart hotel, which we believe is still on track for opening in 2022, will incorporate stilted, circular design, and will be positioned atop of the Holandsfjorden Fjord, allowing guests to enjoying an unparalleled 360-degree view of the Svartisen Glacier. We have been privileged to follow this concept from very early development, to when it announced its interior design team – and more recently by inviting the team to speak on the Hotel Designs LIVE platform.

To reach hefty sustainability goals, several cutting-edge design choices have been made. Architects working on the project first conducted an extensive mapping-out of how solar radiation behaves in relation to mountainous context throughout the year, in order to optimise energy output. The findings influenced the design of the hotel, with hotel rooms, restaurants and terraces strategically placed within a circular design to exploit the sun’s energy no matter the time of day or season.

The hotel’s roof will be clad with Norwegian solar panels that were produced using clean, hydro-energy. This will further reduce overall carbon footprint, while energy-intensive building materials such as structural steel and concrete have been avoided as much as possible.

The space hotel – will it happen? 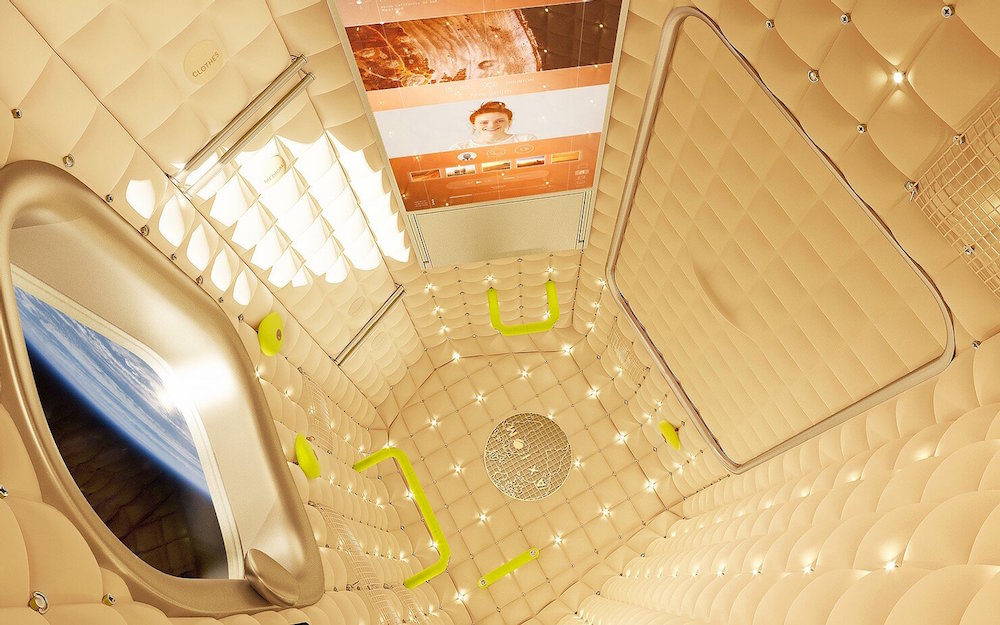 The space race is on, it seems. Following numerous rumours and ignored press releases, there seems to be a buzz in the air that space travel – and dare I say it hospitality – is not a question of ‘will it happen’ but more ‘when will it happen’. Sir Richard Branson recently flew to the edge of space on aboard a rocket-powered plane, 22 years after he created the Virgin Galactic brand that aims to fuel a brand-new tourism industry. Aside from moral questions regarding sustainability and whether or not there is a ‘need’ for space travel, it has undoubtedly floated the idea of space hotels on our radars.

While the headlines were publishing Branson’s achievements, 250 miles above the earth in the wilderness of space, with cabins designed by the world-renowned Philippe Starck, the idea of Axiom space station, which is the brainchild of former NASA chiefs, is coming together and has a ‘launch date of 2024. Costing a reported $2 million, the Axiom station is intended to become the first ever free-flying, globally available private space station, which is planning to launch in 2024. Although its manufacturing requires space engineers, the interiors have been handed over to French industrial architect and hotel design legend Philippe Starck who will have the honour of designing the cabins inside – think “nest-like comfort” – that will frame panoramic views of our home planet below. 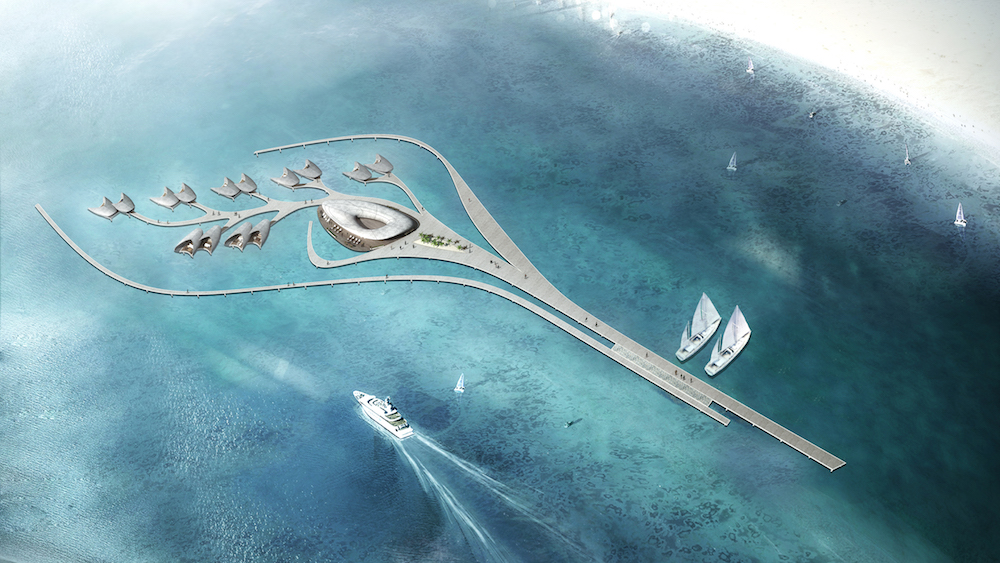 With the aim to design a hotel resort that offers guests an unparalleled at-one-with-nature experience, AMA Design has developed a hospitality concept called GAIA, a floating eco hotel that pushes boundaries to re-connect people with nature. The concept has been designed to fit into its context. Respecting its natural environment in a light and positive way whilst considering sustainable design and circular economy principles, the hotel fits into an emerging contemporary ‘Eco-Gothic’ style. Built from pre-fabricated lightweight composites from boat technology, finishes will be all natural such as bamboo and timber so that visitors are immersed in a natural environment framed with the sky and sea.

We’re not over this trend, which we first highlighted this time last year following us identifying an undeniable demand for one-off travel experiences that allow travellers to be ‘at one’ with nature. Well, you can’t get more connected to the elements than this. New hotel concepts continue to emerge showing completely open-air rooms in the middle of nowhere. One of the developers that is leading the way is the aptly named Zero Real Estate. The theory behind the layout, with the bed being perched on a wooden platform, is that the natural landscape becomes the backdrop. Removing surfaces altogether to eliminate boundaries is a drastic strategy in the post-pandemic world, which will not work for everyone, but it certainly works to deepen one-off experiences for luxury modern travellers.