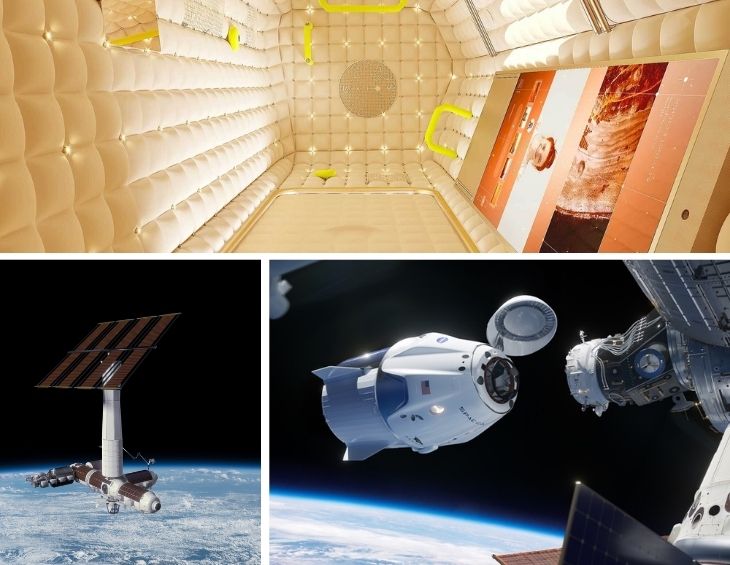 250 miles above the earth in the wilderness of space, with cabins designed by the world-renowned Philippe Starck, the Axiom space station is the brainchild of former NASA chiefs. Editor Hamish Kilburn investigates as the plans get underway…

There has been a lot of talk in recent years of taking hospitality to new heights, but as close we as we have got to a ‘space hotel’ so far has been the Space Suite inside the Kameha Grand Zürich, the ‘Lunar Loo’ designed by Duravit and Orion Span’s planned orbiting hotel, which was slated to welcome guests from as early as 2022 – we have no update on its progress.

However, in a recent article in The Times, the race to launch hospitality outside earth’s atmosphere has taken a bold leap forward with plans, led by former NASA chiefs and astronauts, now underway to build the first commercial space station. Free from the shackles of gravity, extensive research and manufacturing has to led to this moment; Axiom being one step closer to launching.

Headquartered in Houston, Texas, Axiom, which literally means “a statement or proposition which is regarded as being established”, is a company co-founded by the former programme chief of International Space Station (ISS) “Axiom was founded with the vision of a thriving home in space that benefits every human ever where,” Mike Suffredini, chief executive of Axiom Space and who previously led NASA’s second largest engineering contract, said. “We often hear that this is a very bold statement. it is.”

“Philippe Starck will have the honour of designing the cabins inside – think “nest-like comfort” – that will frame panoramic views of our home planet below.”

Costing a reported $2 million, which is a drop in the ocean when considering the cost of building a new-build hotel in today’s climate, the Axiom station is intended to become the first ever free-flying, globally available private space station, which is planning to launch in 2024. Although its manufacturing requires space engineers, the interiors have been handed over to French industrial architect and hotel design legend Philippe Starck who will have the honour of designing the cabins inside – think “nest-like comfort” – that will frame panoramic views of our home planet below.

The company promises to “help open a new chapter in human history” with this launch. On its website, it says: “20 years after astronauts first began to live and work aboard the ISS, Axiom offers the ability to traverse the sublime reach of space and fulfil personal goals of philosophical, philanthropic, scientific or commercial nature.”

Although we are somewhat sceptical when reading about a hotel in space, it is encouraging to see that Axiom has a fine pedigree who are ultimately making this dream a reality. As well as Suffredini, the team includes four retired astronauts, including Charlie Bolden, the former head of NASA.

To infinity, and beyond!