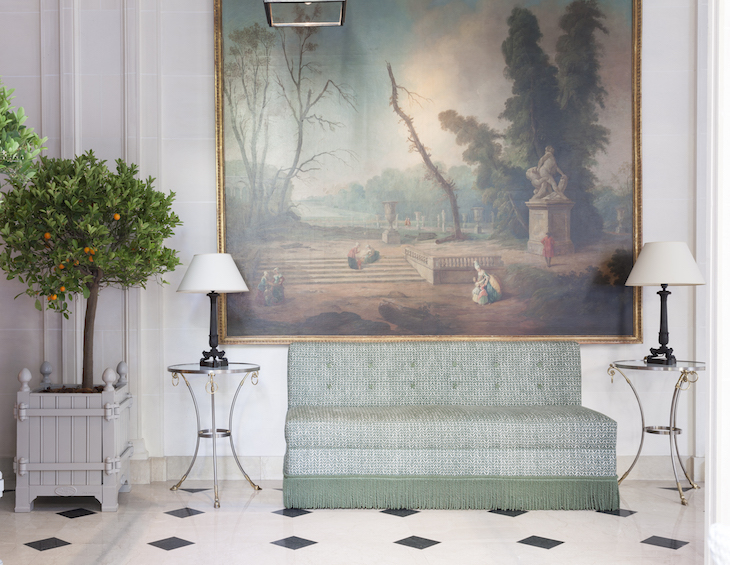 To round-off our weeks putting ‘Public Areas’ under the spotlight, we are focusing our lens on the opportunities of lighting. Recommended Supplier Vaughan compares the different ambiances its lighting products can create…

Public areas are one of the key spaces to set the tone of a hotel. As soon as a visitor walks through the doors, it is important that they are met with a certain ambience and style that reflects the rest of the hotel.

At Vaughan, we are grateful to be included in numerous hotel projects and renovations – including Grantley Hall, The Langham and Le Bristol Paris.

Grantley Hall is a Grade II listed building, built by Thomas Norton and his son Fletcher Norton, 1st Baron Grantley in the mid-18th century. It has an eclectic history, not just physically – with extensions added in both the 19th and 20th centuries – but also in terms of its use.  Initially a family home, it was turned into a convalescent home during World War II. Then between 1947 and 1974, it was under the ownership of the West Riding County Council where it was used as an adult education residential college.  In 1974, it was transformed once again into a training and conference centre thanks to the North Yorkshire County Council in 1974.  Finally, Valeria Sykes bought the house in 2015, and went on to establish Grantley Hall as the hotel it is now known to be.

The downstairs hallway of Grantley Hall undoubtedly showcases the tone of the rest of the hotel: refined and elegant, with rich, red velvet lined chairs, pleated shades and brass tones throughout. The defined lines of the Georgian architecture are mirrored and maintained in the candlestick table lamps, as well as in the geometric forms of our Regency Hall Lanterns. A sleek combination of brass and glass, the lanterns work well in this space – the glass actively reflecting light across the space and the brass adding to its warmth. Their even separation and display straight down the centre of the hallway echoes the uniformity of Georgian architecture, while marrying with the antique frames, table lamps and picture lights.

The Palm Court at The Langham is very different in style to Grantley Hall, but has an equally beguiling history. Built between 1863 and 1865, it was opened on 10th June, 1865 by the Prince of Wales. The largest and most modern hotel in London at the time, it went on to entertain the likes of Mark Twain, Oscar Wilde, Toscanini and Sibelius, as well as provided the set for the Sherlock Holmes story ‘A Scandal in Bohemia’. In World War II, it was used in part by the Army until it suffered damage by bombs, and after the war it was purchased directly by the BBC. Since then, it has seen two further owners, and two renovations, with its most recent one thanks to the Hong Kong based Great Eagle Holdings. 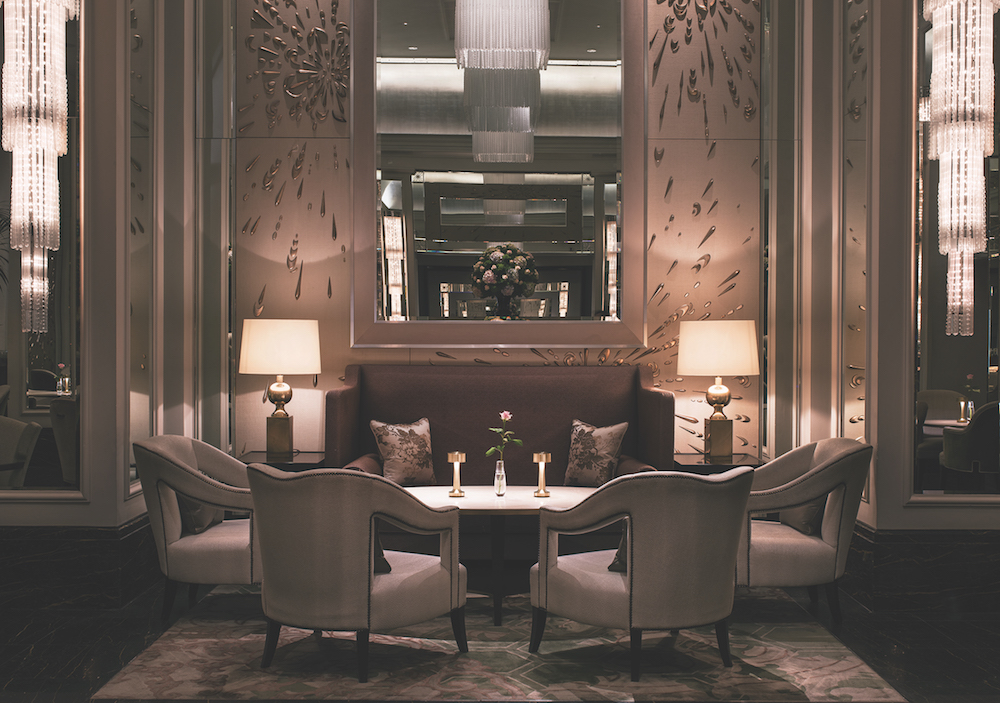 Decidedly more contemporary in feel, this image of the Palm Court shows two chandeliers hanging either side, almost reaching the floor, and brass pieces attached to the wall to create a floral-themed, decorative display. Studded armchairs arc around a table, behind which is a high-backed sofa, and to each side of the sofa is a side-table upon which sits our Woodville Table Lamps. Similar to Grantley Hall, the brass elements neatly come together and create cohesion: the Woodville Table Lamps appear strikingly similar to the salt and pepper shakers on the table, and work well with the brass installation behind.  Cushions on the sofa similarly reflect the floral themes on the wall, while the glass chandeliers add a further sense of drama and light.  Indeed, it is these chandeliers that provide the brightest, most white light in the room, and create a satisfying contrast against the balmy glow of the table lamps.

Le Bristol Paris, like Grantley Hall and The Langham, also has a history to it. Named after Bishop Frederick Hervey, 4th Earl of Bristol, who was an 18th century traveller known for his love of comfort and unwavering standards, it remains one of the most treasured hotels in Paris. Recently refurbished during a six-year stint from 2012 to 2018, it now contains additional Vaughan pieces such as the Saltwood Tripod Table Lamps shown here. A traditional lamp, cast in bronze by a father-son duo in England, it works well in this scene, with the pair neatly framing the painting. Neither predominantly traditional, like Grantley Hall, nor contemporary, like The Langham, Le Bristol Paris appears to combine and weave different styles together – whether that be with a fringed sofa against a historic oil painting, or an antique-inspired lamp on a glass table.

Although Grantley Hall, The Langham and Le Bristol Paris are assuredly different in style, what they share in common is their success in establishing an ambience and theme the moment a visitor walks through their doors.  Whether that be maintaining a traditional, Georgian feel as in the Grantley Hall hallway, a glittering, intimate space as in The Langham, or a fusion of both modern and traditional as in Le Bristol Paris, they all establish this in their public areas, as a reference and precursor to the rooms hidden within.