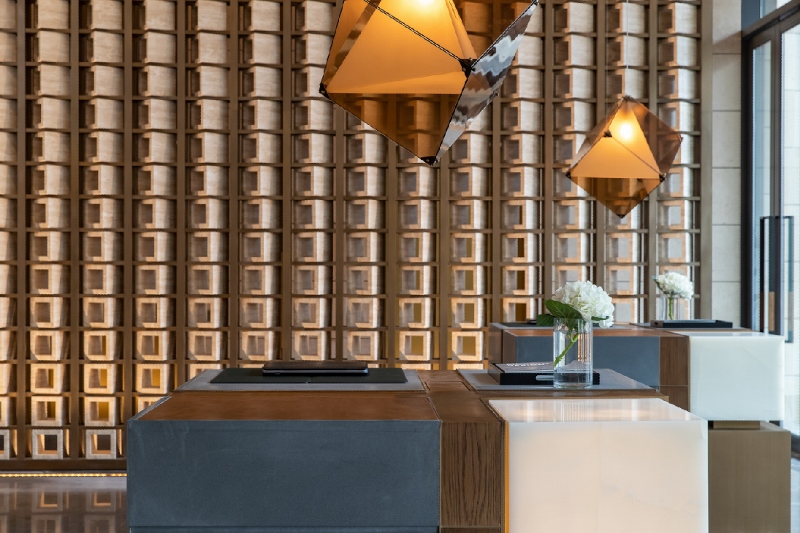 Opened late last year, Joyze Hotel Xiamen Curio Collection by Hilton, with all its unique design qualities, is a mere shadow of the stereotypical chain hotel you would expect check in to. Editor Hamish Kilburn dives deeper into its Chinese design story to uncover how the boutique 104-key hotel came to be…

As a boutique hotel, the concept of a ‘floating city on the sea’ can be seen throughout the hotel design of Joyze Hotel Xiamen Curio Collection by Hilton. Combining the local cultural elements of Minnan with urban design techniques, the hotel narrates the historical changes of “the fishing village” that it neighbours. Tasked to merge architecture with interior design was Hong Kong-based design firm CCD (CHENG CHUNG DESIGN). 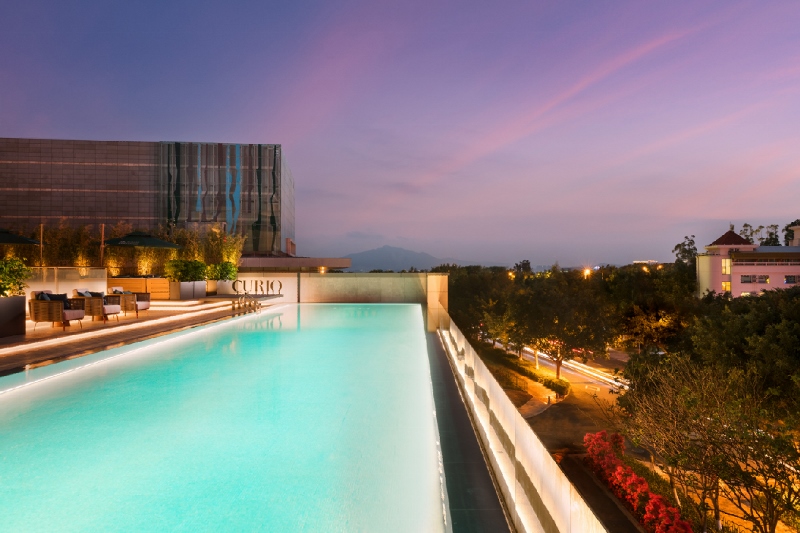 Surrounded by mountains and seas, with the Dongping Mountain in the North, and the coastline of Huandao Road in the South, the hotel enjoys the best of both worlds. The villages in Zengcuoan are divided by walls, and the houses in the villages are scattered around. The floor plan of the hotel follows the arrangement of the villages, as different zones are divided by walls and intersected by landscapes between different areas. Look down from the above; each area is like a box, representing a household with different personalities and designs. Guests enter the hotel as if they are on a village tour, complete with alleys, walls and landscapes. 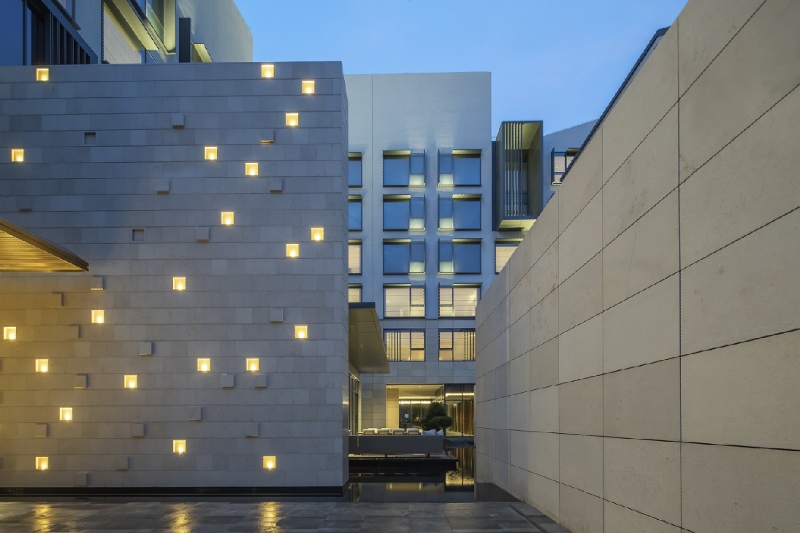 The entrance of the hotel incorporates the local culture of ‘brick wall’, which is a very unique way of building a wall in Minnan architecture that uses stones and bricks of different shapes to overlay and build simple and beautiful walls.

According to the legend in the end of the Ming Dynasty that, there was a major earthquake occurred in the Southern part of Minnan region. After the earthquake, the native people used the local materials such as bricks, stones, tiles and gravels collapsed from the natural disaster to build the unique wall. And thereby, this way of wall-building has been widely practiced and followed in the region. 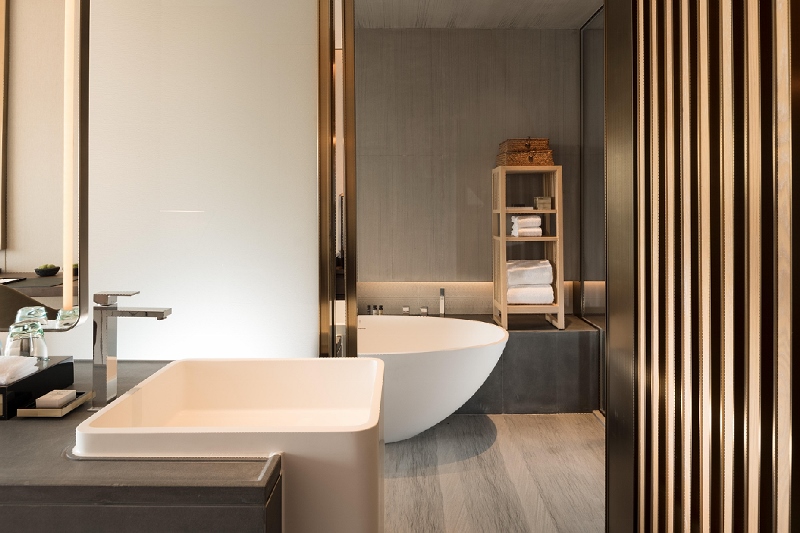 The designer also used the mansion method to design the hotel lobby. The first sight of the guest after they get off from the drop-off area and enter the hotel is not the hotel lobby, but a door that is several meters wide, and if they are entering a mansion house. Then they will see the brick wall, followed by cultural exhibition area, then other landscapes and finally the lobby bar and reception.

“Under each box, there is a light to create a sense of levitation.”

The design concept of “Floating City on the Sea” is expressed through the subtle design method.The façade of the wall is constructed with boxes, and it transforms from empty to solid, presenting a feeling of ‘floating’, the orderly change of the gradient also presents a sense of rhythm swinging with the current. A corner of the reception desk floats into the air, becoming a warm chandelier, floating on the sea, and the entire hotel is like a floating city on the sea.

In comparison to the hotel, every box in the space is the composition of the hotel as a floating city. Under each box, there is a light to create a sense of levitation.

“The design of the guestrooms are natural, warm and cosy, creating a sense of home.”

The design incorporates natural comfort and childhood memories, vintage chandeliers, metal-trimmed glass doors, wooden tables and chairs; it brings guests back to the restaurant where they used to go with their parents. Here, the curious people walk into the old days of Xiamen. 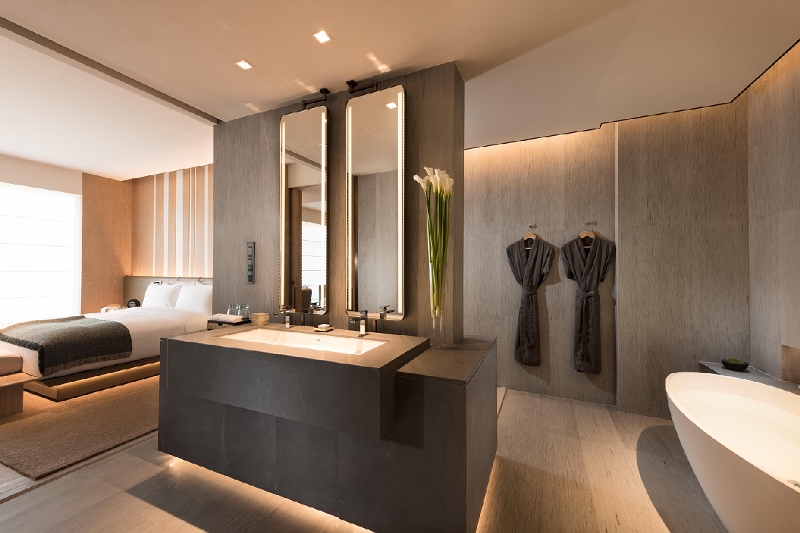 The design of the guestrooms are natural, warm and cosy, creating a sense of home. Meanwhile, it also tries to open the space as much as possible as to form a transparent visual experience. Getting rid of the traditional framework, and strengthen the interaction of spatial functions through subtle design, so that each area can be used alone and connected.

After the entrance is the cloakroom and the luggage rack, which is designed to make the walkway more functional and to make the largest use of space. In detail, it also closely follows the concept of floating city, as the wash table and the bed are suspended from the ground.

The city view and beach outside the window is one of the hotel’s business cards. The wash table, mini bar and operating desk form a small living room, so that guest can sit in the living room and enjoy the scenery with tea, just like the local residents. The texture of the old buildings in the city is projected onto the walls of the guestrooms, and the patterns of the old buildings in Gulangyu are carved into ceramic tiles, which become time fragments to record the traces of the years.