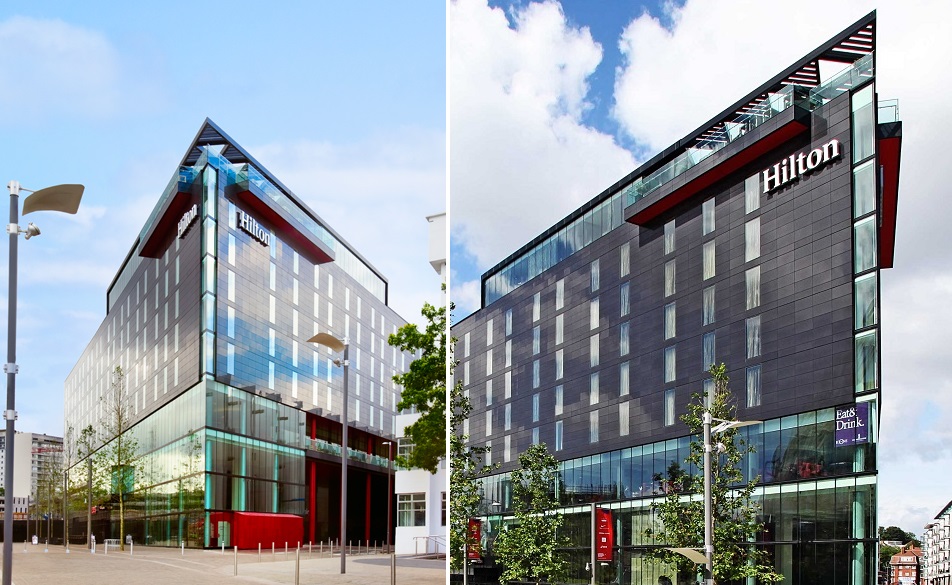 The transformation of the Wembley area of north-west London in the last 15 years has been nothing short of incredible. The most obvious and celebrated symbol of that regeneration is of course England’s new national stadium. Indeed, tales abound of how run-down the antiquated-yet-iconic Empire Stadium at Wembley had become by the time it was unceremoniously bulldozed to the ground after an acrimonious send-off in 2000 — a depressing 1-0 England defeat to the Germans in the driving September rain.

A decade-and-a-half on and very much like the game of today it plays host to, the new stadium is a gleaming beacon of sanitised modernity and corporate hospitality heaven. The surrounding area has benefited from this gentrification too, which is most probably why hotel chains are queuing up to set up shop on the doorstep of a much-improved, internationally-renowned venue. 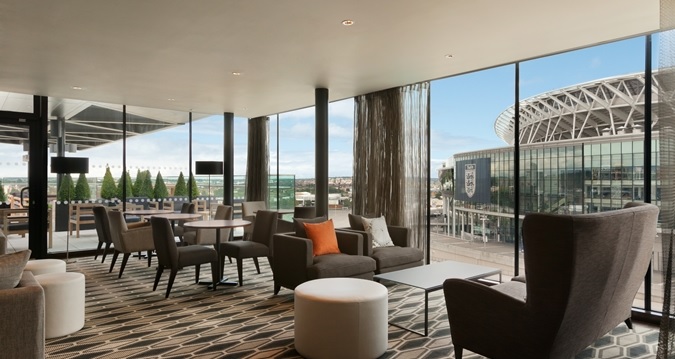 One such chain was Hilton; its London Wembley hotel has slotted into that business-like vibe surrounding the stadium perfectly since opening its doors in 2012. And make no mistake, this hotel is geared up unashamedly for hosting corporate guests and large-scale business get-togethers. Having spent a morning being shown around this 321-room hotel, it’s clear to see that it does it well.

From its exterior with its striking corner-point catching the eye as soon as you walk up to the hotel to the seemingly ceiling-less lobby with its bold use of greys and browns, this Hilton makes a statement-filled first impression. The neutral tonality of the lobby interior is broken up somewhat by the splash of colour brought about by beautiful light fixtures, an array of sporting shirts and jerseys plastered on a wall at the far end and by the wallpaper accompanying the escalator ride up to the second-cum-mezzanine level which depicts all the great sporting events held at Wembley — both old and new. 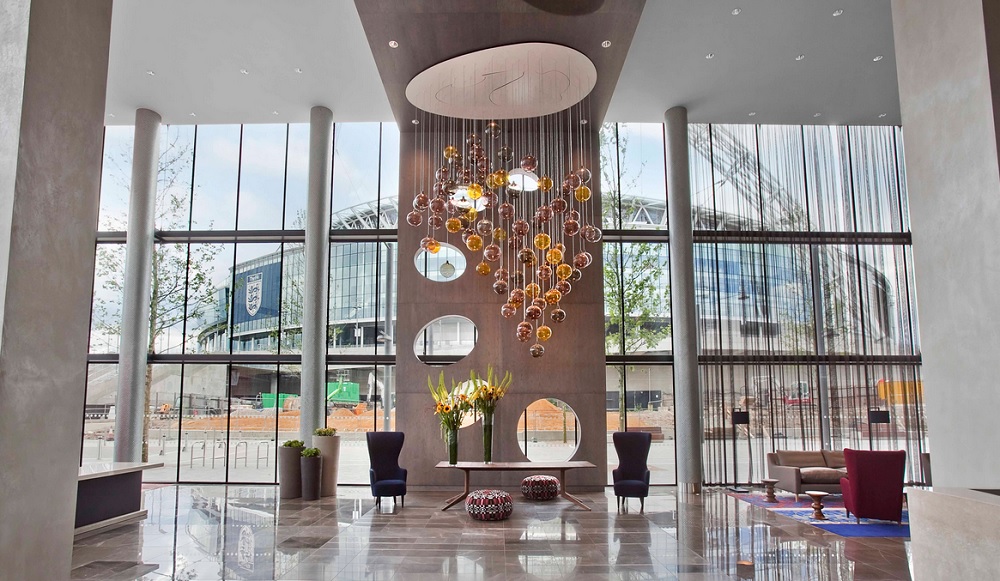 The second floor houses a fitness centre replete with a fantastic indoor pool, an added bonus for guests especially considering the locale and the restriction of space in such a built-up area. Aside from this, however, there is nothing else contained on the level except lift wells and another escalator going up to the Ballroom, Association Restaurant and Icons bar. My guide for the day, Gemma, assures me the space is used for overspill during conference registrations but I can’t help feel the space is somewhat wasted and a blip on what is otherwise a brilliantly designed and decorated hotel.

Indeed, the third floor bears all the hallmarks of a savvy designer throughout. The Grand Ballroom, where the majority of the conferences and meetings held at the hotel take place, is a fine example of an event space and is one of the better designed ones I’ve seen in the capital; the space has a feel of luxury about it thanks to lush carpets and grand light fixtures. With enough room for 900 delegates, the flexibility to be laid out in a variety of set-ups depending on the function as well as cleverly-placed exits and entrances to the restaurant and bar to keep delegates within the event space rather than wandering off elsewhere — this is an example of canny design. 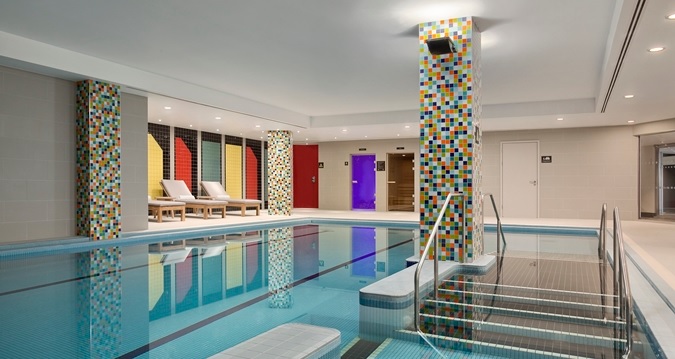 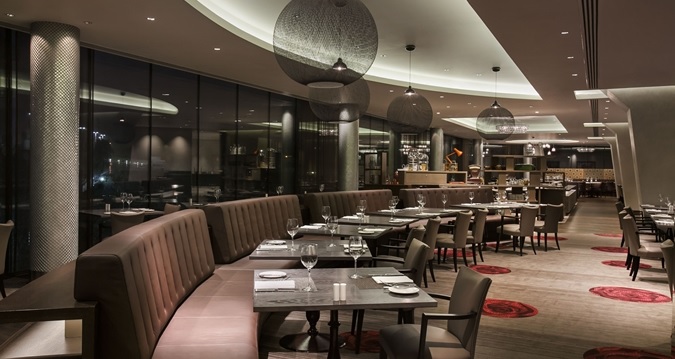 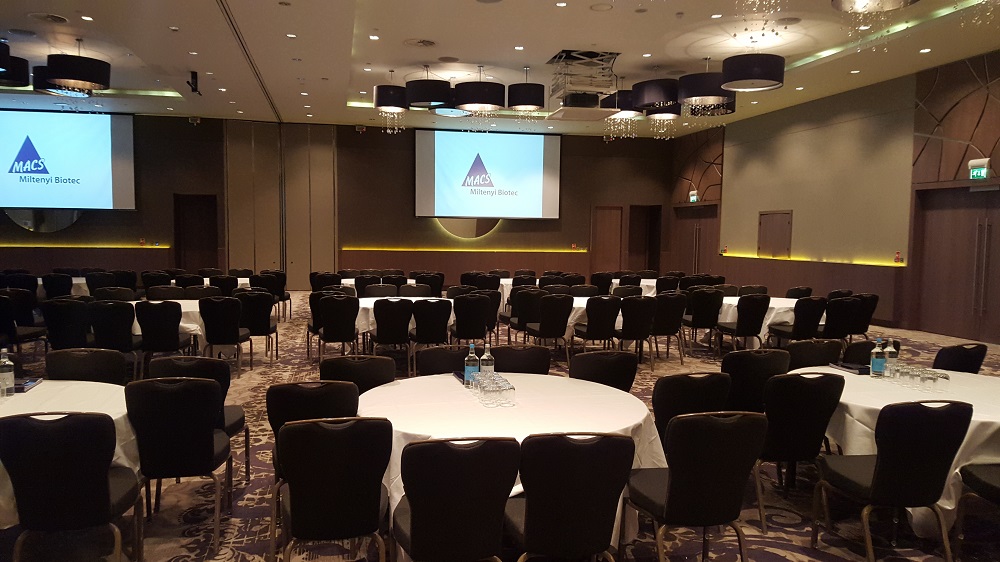 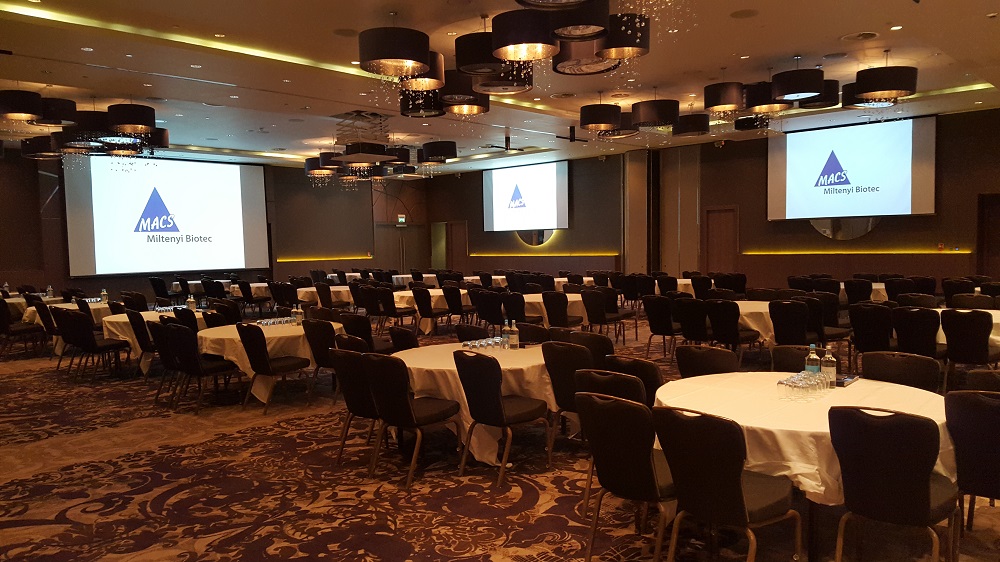 The Association Restaurant itself also contains pleasing touches of design; in a bid to remove the feeling of eating in a canteen it has been broken up into sections through good use of walls and dividers. And a London-themed wall display made up of custom-made plates marking major landmarks throughout the city was a particular favourite of mine. Again, the neutrality of the lobby’s colour scheme has been used in the Icons bar with browns, whites and pale greens dominating with the occasional accentuation of colour added by bright red, high-backed armchairs. 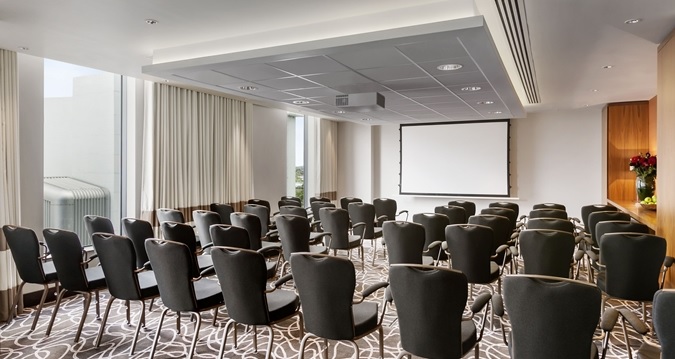 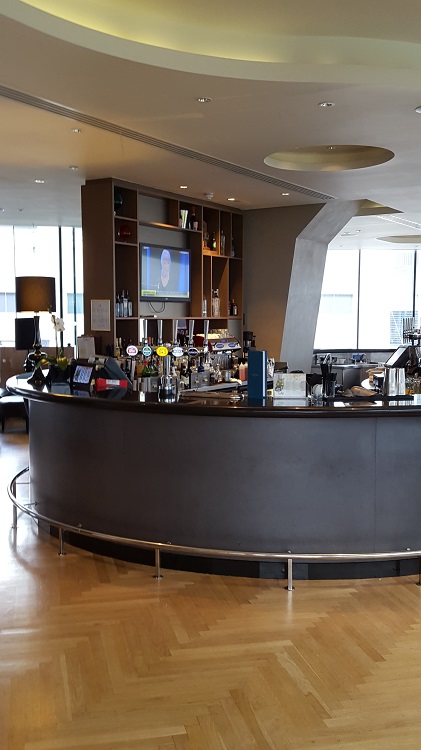 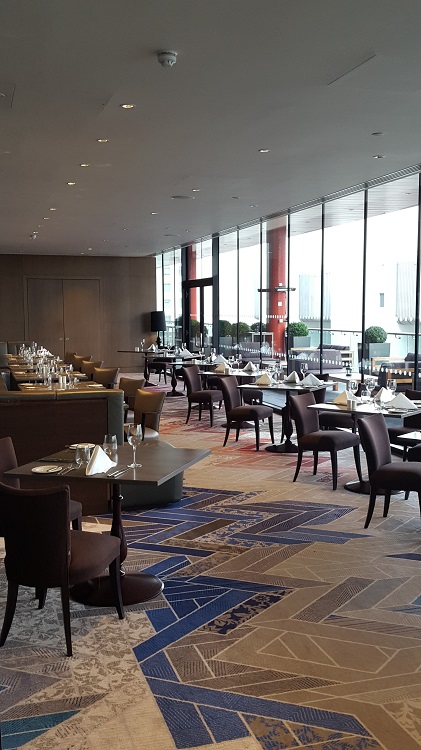 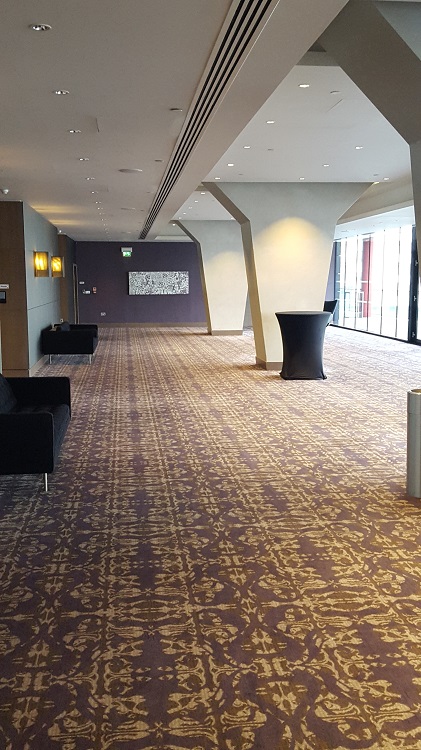 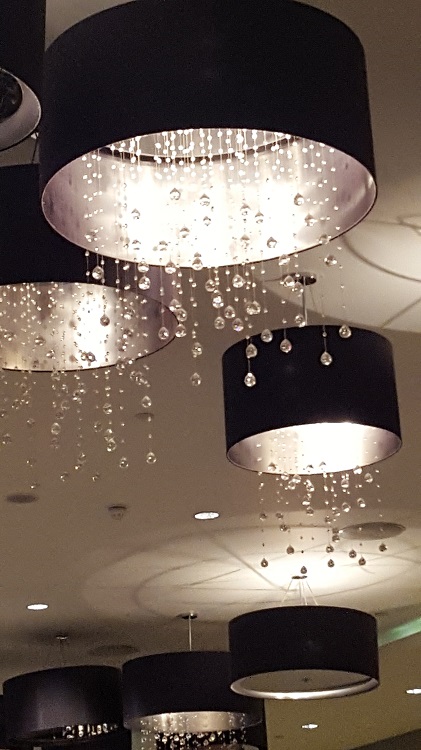 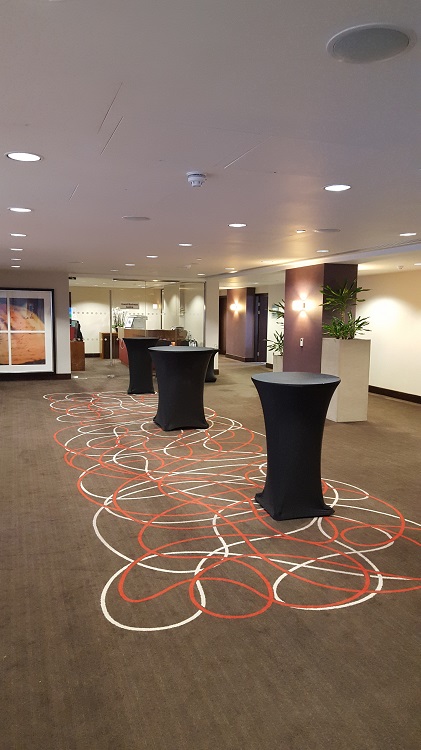 I’m next shown a more intimate meetings and events space on the fourth floor, which comes with guest rooms on the same level — all of which can be hired out by smaller groups looking to keep an element of privacy or exclusivity to their events. All meeting rooms have excellent AV capabilities and are decorated slightly more sumptuously than the Ballroom below, with well-appointed carpets and furnishings.

Guest rooms are a very generous size; their walls and carpets decorated with muted browns, deep purples and subtle yellows. Stunningly simple headboards above the beds frame the rooms perfectly on entry. As with the rest of the hotel’s spaces, the bedrooms are well-lit thanks to the large floor-to-ceiling windows which are simply dressed with delicate mesh and two-tone fabric curtains. In the suites, an extra living room also benefits from the generous natural light, and those built into the building’s pointed façade (often a nightmare for interior designers ‘gifted’ by the architects) have dealt with this issue by placing a prominent pillar to keep the space contained. 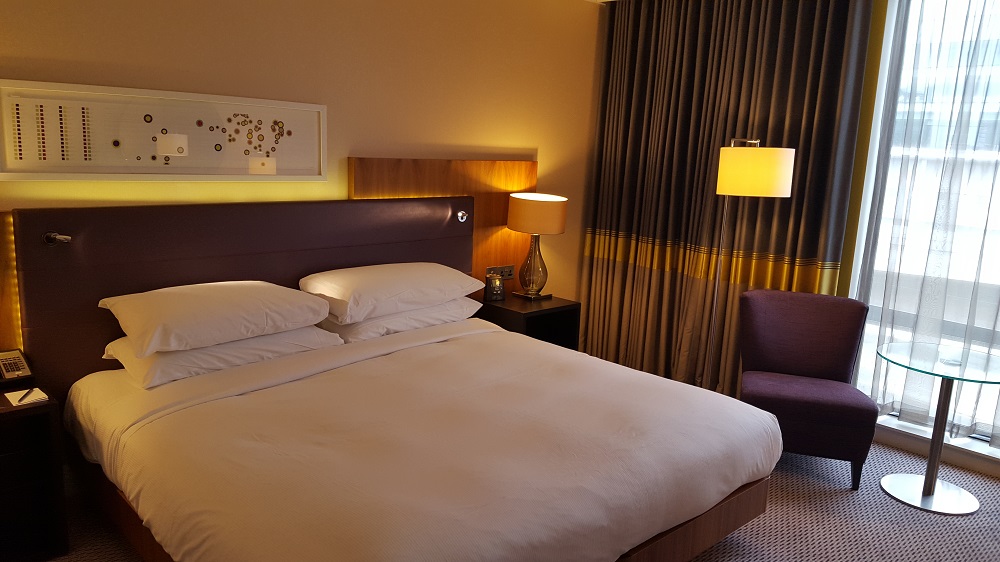 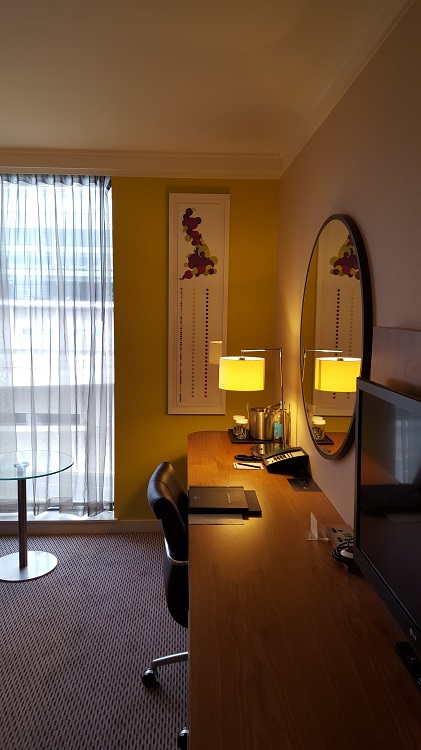 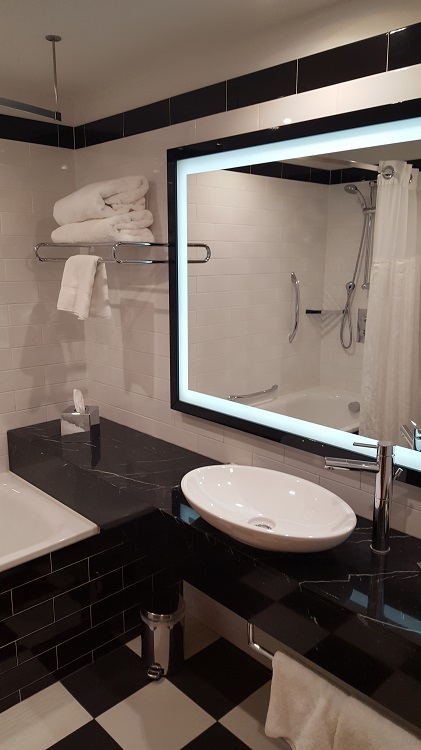 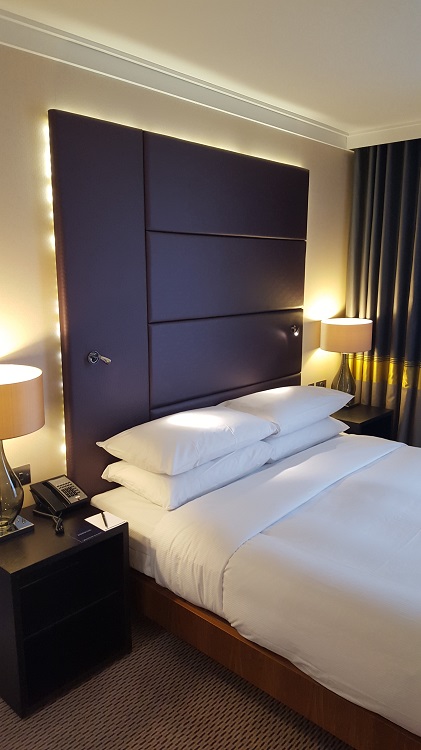 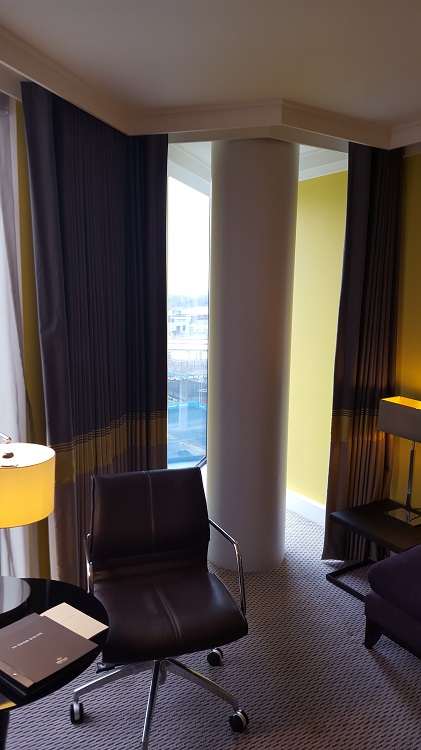 The bathrooms I saw were tiled in brilliant black-and-white, with beautiful plain white ceramics and bold, statement taps. A very good-sized, LED-bordered mirror sits above the basin offering a reflection of the entire space.

The last spot on my whistle-stop tour is the executive lounge and Sky Bar 9 — appropriately located on the ninth floor — with both offering incredible views of Wembley Stadium and the cityscape beyond, especially from the outdoor terrace. These are stylish and elegant spaces, as expected from a Hilton property located in a capital. In the lounge, I particularly love the copper, fish bowl-shaped pendant lampshades and photographs of iconic artists who have performed at the nearby arena and stadium. And in the Sky Bar 9 I’m instantly drawn to the striking, gregarious yellow upholstery and cladding.

Where the designers may have had to work with an element of restraint in decorating the corporate spaces within the hotel, they were clearly given a lot more freedom to play with on the ninth floor. It’s the best designed and pleasingly decorated space in the whole hotel and marks the high-point of a fine piece of work by both design and architectural teams. From my lofty viewpoint, it was impossible to avoid seeing the numerous construction projects going up left-right-and-centre in the Wembley area and beyond. It won’t be long before this Hilton is entirely encircled by commercial and residential properties all around, but many will have a long way to go if they are to deliver a finished article as elegantly functional as this… 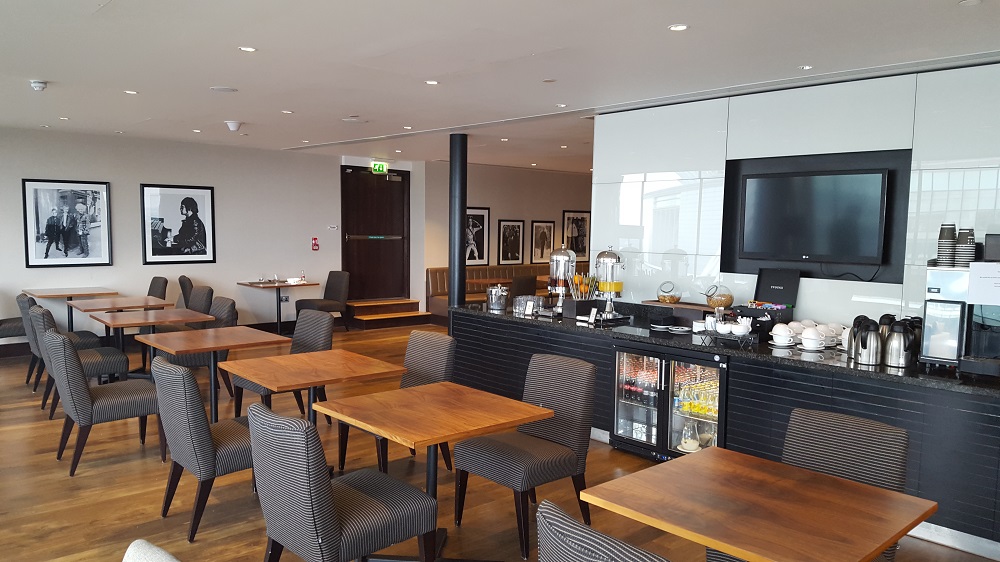 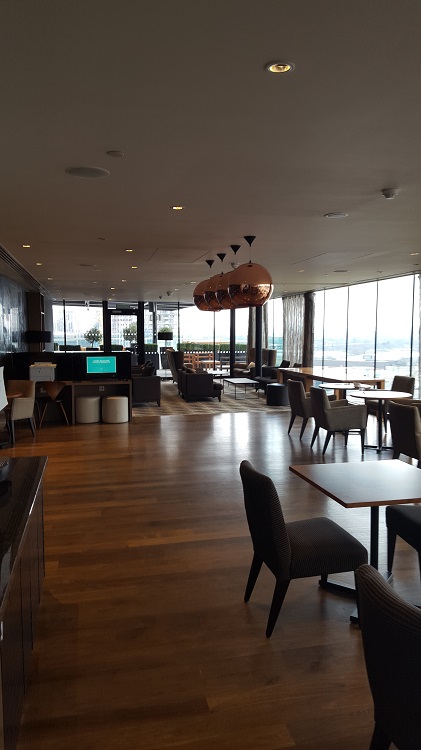 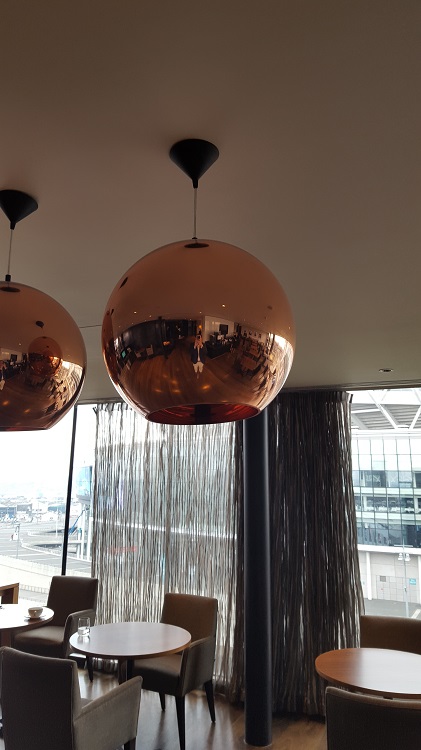 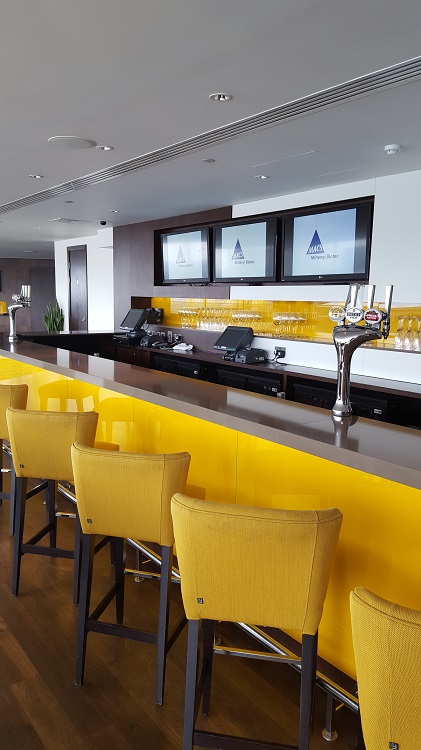 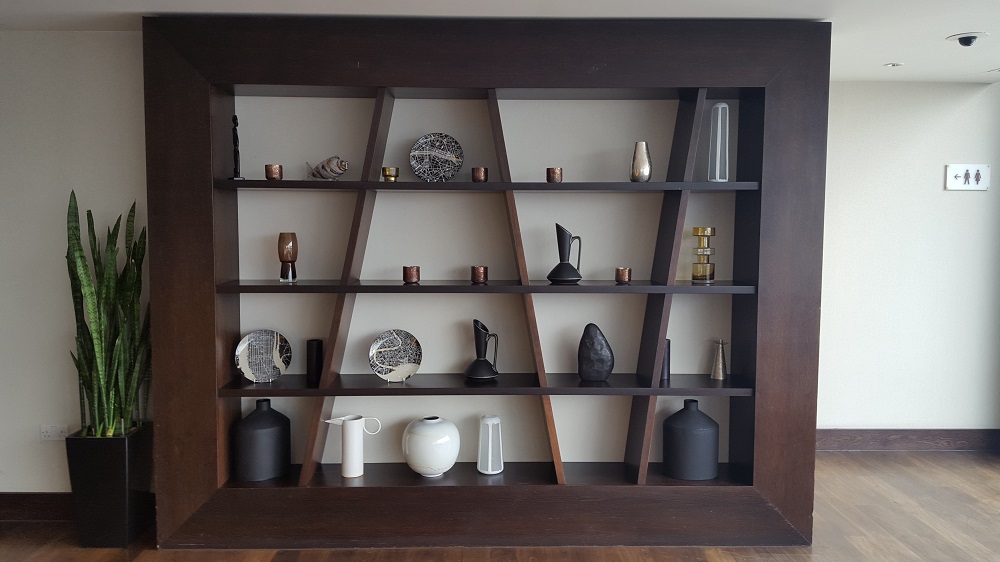 Based on a visit in February 2016
Photos by Daniel Fountain // Hilton Media Centre (hilton.com)
www.hilton.com