From designing celeb hot spots in London to creating award-winning contract furniture collections, Rock Galpin is a fountain of knowledge when it comes to cutting-edge product design, interiors and understanding the trends as editor of Hotel Designs Hamish Kilburn learns after meeting the designer at London Design Festival…

It was at the beginning of London Design Festival (LDF), at an after-party in The Curtain to be precise, when and where I first had the pleasure of meeting the award-winning furniture designer Rock Galpin. Having just flown in that evening following a trip to the sun-trapped island of Rhodes, Galpin was in London to assess the trends while also using the week as a fine opportunity to catch up with old and new clients and friends, two categories are separated only by what I can describe as a faint line in the sand. Among them was Galpin with a friendly and approachable demeanour that draws me in to want to understand the man behind the designer.

One week later, as the dust starts to settle on the Capital, Galpin and I are meeting for coffee to discuss trends, industry success and innovation in design. “So this is what I’m working on at the moment and what I wanted to show you,” he says as he opens the laptop to reveal his ‘top secret’ design renders and plans, which, without giving too much away, inspire me to realise that the future of contract furniture is turning a page to an exciting chapter. “As a designer that is working in the commercial sector, I’m often looking up to 10 years ahead of the now,” he explains. Galpin’s logic is that you have to allow two-to-four years before your design, once commissioned, will even enter the production phase. “In addition, you want to design a product that has a minimum shelf life of at least five years,” he explains. For Galpin, who to my eyes has the patience of a saint being able to sit on designs for that long, the contract furniture product of the future will operate in a tech-driven scene, allowing for a seamless experience. He explains: “I want to ideally create an environment whereby technology is completely invisible.” His vision comes as, somehow, despite the growing demand in tech-driven experiences, certain technologies have not evolved and personalisation continues to be a really interesting topic. “Maybe the chair will physically mold to fit the user, or maybe the table will organically allow the user to be sat in the best state physically as mentally,” he adds. “I have a few ideas on how we can do this.” 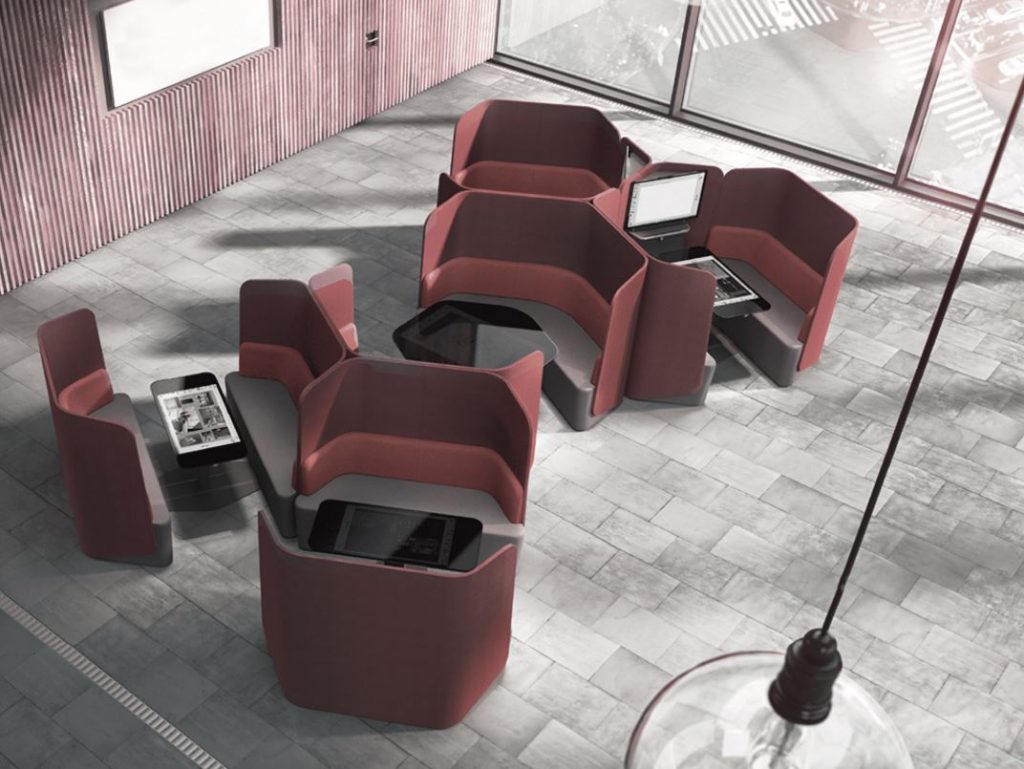 Working so far ahead is a challenge for any creative, and getting the balance right between being creative and being commercially appealing is key, as Galpin explains: “I have come to realise that people will accept incremental changes in design and not large leaps. Of course, there are exceptions to that, just take the Google’s offices as an example. However, I do believe that clients and consumers prefer to see a more gradual progression in product design as we move forward.”

“I have noticed that colour seems to come in when we are experiencing a repressed or depressing economic time.”

With this year’s Brit List around the corner, and LDF continuing to prove that it is at the centre of the design world, Galpin is quite obviously proud to be a British designer. “Britain always seems to have this breath and eclectic, inventive population that, I suppose, being an island as well, can incubate ideas. Other countries can’t do that as well,” says Galpin as we start discussing London as a major international design hub. “We’re going softer and softer as an aesthetic when it comes to shapes and forms. Interestingly, though, colours have become really powerful this season,” he says. “We’re seeing a lot of vibrant colours and citrus accents; blues and pinks are very much around. I have noticed that bold colours seem to creep in and actually the integrity of design evolves when we are experiencing a repressed or depressing economic period because designers need to work harder in order to tick certain boxes. I have noticed that in the most demanding times come some of the best designs. The ’80s were a great example of this. But immediately after, of course, we experience the complete opposite. They called it ‘green’ design which was a way of becoming more sustainable, raw and eco-friendly.”

Galpin’s ability to work the room at any event was evident at LDF and is the direct result of years of hard work in order to establish himself in the industry as a rightful leader. His first major break, though, came when he was asked to design a furniture line for ARAM, which, along with Terence Conran, was one of the most significant – and most important – furniture brands at the time. “It was a really nice journey, and allowed me to work closely with Zeev Aram,” he says smiling. “I did a sofa and table collection for them right at the beginning of my career. It took two and half years, and it was a truly lovely process.” The modular sofa system and range of tables made fame in 1993. Aimed at the design savvy contract market, the Kama sofas and Sutra Tables also appealed to the clean-living domestic market.

“As a result of the collaboration, in 2005, Galpin won the Laurent-Perrier Design Award.” 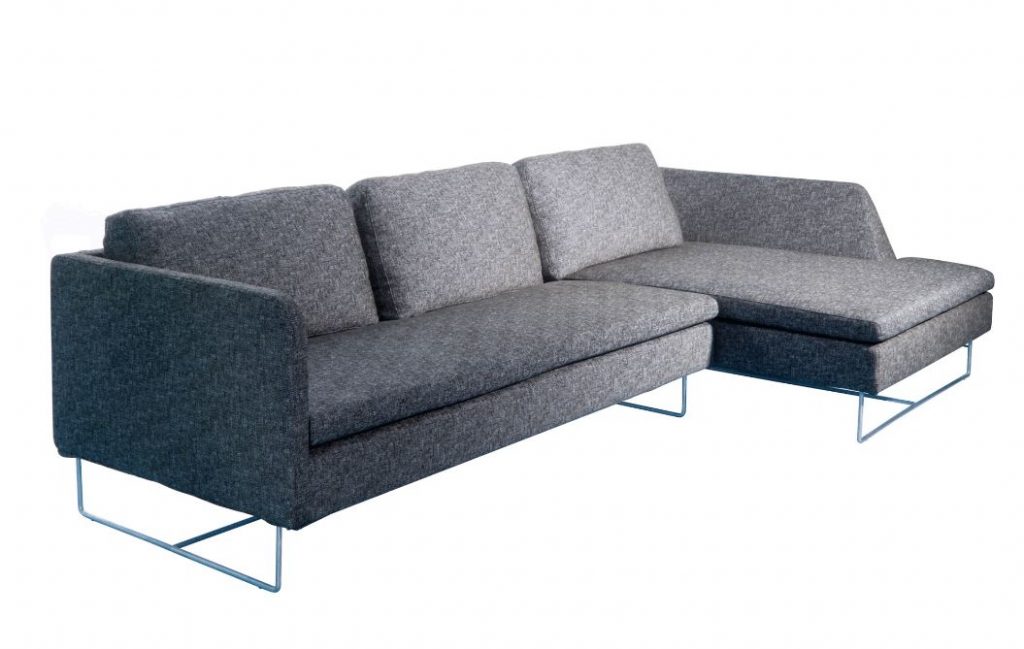 Other milestones in Galpin’s full career include designing The Bombay Sapphire Experience and London’s Punk Nightclub, which became a favourite for the likes of Kate Moss and her entourage. However, one of the most impressive moments, from where I am sitting at least, is Galpin’s collaboration with Designers Guild. Applying for a competition in order to collaborate with the brand, he pitched his designs along with 30 other designers and won. The project enabled him to work with Tricia Guild OBE and the manufacturers B-Design in southern Italy, which produces furniture for the likes of Minotti, Cappellini and Thonet. As a result of the collaboration, in 2005, Galpin won the Laurent-Perrier Design Award for the Sketch Sofa and Easy Lounger. “The whole journey was fantastic from drawing and designing right through to production,” Galpin adds. One year later, Galpin continued to be at the forefront of the international design scene by unveiling the Mark 1, which was awarded runner up for the same award.

Hamish Kilburn: Where’s next on your travel bucket list?
Rock Galpin: I haven’t been abroad to anywhere really different from the UK for a while now. Anywhere with a relaxing beach. I’m in the mood for Thailand or Cambodia!
HK: What’s your number-one item you cannot travel without?
RG: Music!
HK: What’s your favourite colour?
RG: At the moment, black, green (I particularly like a colour I call ‘drab green’, which has a tinge of black in it – but it’s quite lively). Other than that I like mustard and orange, but it has to be the right shade. Instead of a washed orange, I love the more rusty tone.
HK: What inspires you?
RG: My inspiration comes from things as well as people. The automotive world and nature is a great example. I love sci-fi and the styling of what futuristic objects can be. In regards to people, Ross Lovegrove, Mark Newson, Ron Arad were all people that inspire me when I was developing my career.
HK: What’s your biggest bugbear?
RG: The biggest frustration is the amount of ideas I have and how many of them I can’t find the people to get them realised. If there’s one thing that we need to develop in this industry are intermediaries who can find that talent and make ideas a reality.

“It was by far the largest sofa I have ever designed.”

As well as designing much of his work for the commercial sector, there are the occasional exception, and when record producer Nellee Hooper approached Galpin to ask him to design a sofa for his studio, he could not refuse. “It was four metres long and made from six different parts,” Galpin explains. “It was by far the largest sofa I have ever designed.” I can’t help but ask what Galpin’s house is like. “The furniture in my house is by no means something I have put together from a blank canvas,” he says chuckling. “A large number of pieces in my place are my own prototypes. It really is a collection of products that don’t necessarily sit well together, but they do represent my journey that I’ve been on. I also have collected a number of Charles & Ray Eames furniture pieces and I am a big fan of the artists Alan Fletcher and Ewan Eason among others. You will also find a lot of Artemide lighting around my place. Other than that, there are a few Habitiat items lying around too.”

As designers go, Galpin strikes me as someone who I believe is keeping the hotel design industry fresh with innovative ideas and the ability to always look ahead. His success has certainly not gone to his head, nor has he reached the peek in his career. I am impressed that a designer can leave such an impression in such a short space of time. But here I am feeling as if I have met another friendly face who I look forward to following as his latest ideas become reality.