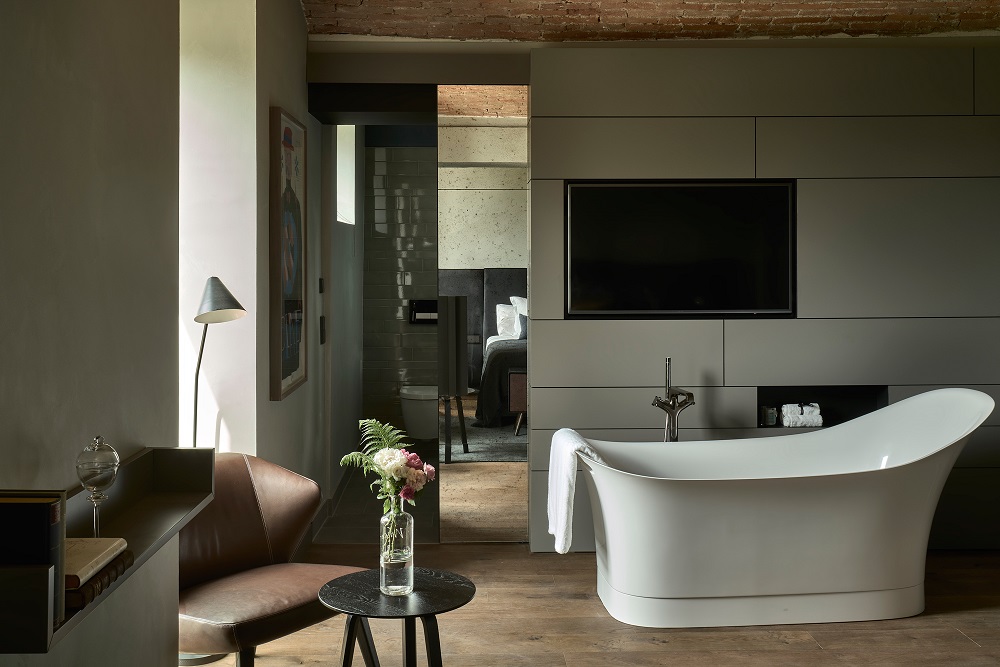 Proving that a hotel can bloom from the most unlikely of settings, Hotel Liberty has just opened its doors to guests after an extensive three-year renovation project centered around Offenburg’s former prison.

And thanks to its commitment to impeccable design, service, and gastronomy, Hotel Liberty is set to become a destination in its own right.

Architecture and Design
Hotel Liberty’s 38 rooms and suites are spread across two 19th-century buildings and joined by a contemporary glass box. Originally conceived by the German architect Heinrich Hübsch in 1840 and completed in 1845, the structure served as a jail for the city of Offenburg until 2009. A comprehensive renovation program between 2014 and 2017 has resulted in a hotel design defined by wide corridors, natural materials, and a 10-meter-high glass wall which provides a striking juxtaposition to the severe red sandstone façade. The original stonework plays an integral part in the aesthetics of the 38 rooms and suites, which have been created by connecting several former cells. Further referencing the building’s past, the 1.2 meter-thick walls have been left intact, and the old cell doors have been cleverly integrated into the contemporary layout.

The new glass box extension acts as a gateway to the two components of the original structure, and houses the restaurant, lounge, gallery, and a library that boasts over 3000 tomes. The second-floor conference and meeting room appears to float in mid-air and adds a whole new meaning to ‘blue sky thinking’. 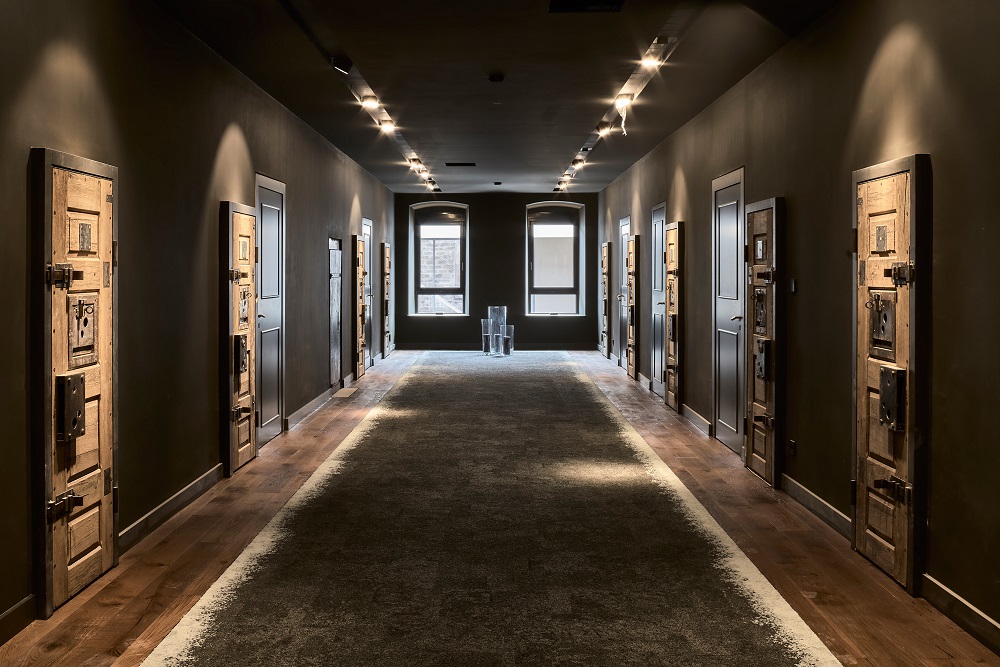 Rooms and Suites
The Knoblauch design studio was responsible for the hotel’s interiors, which fuses traditional craftwork with contemporary design classics. In the guestrooms, sideboards by Dutchbone and pieces by Fritz Hansen, HAY, and Arflex rub shoulders with handmade furniture and accessories by local artisans. The tonal green color palette complements the dark oak parquet flooring and red brick vaulted ceilings. Artwork handpicked by Hotel Liberty’s Originals—brothers Christian and Dietmar Funk—grace the walls, showcasing the talents of resident Offenburg artist Stefan Strumbel. The black leather headboards contrast with snow-white beds, which feature woven linen from Swiss firm Schwob and cloud-like mattresses by Treca. An extensive pillow menu ensures a perfect night’s sleep for each and every guest.

Perfectly equipped for a stylish night cap, the minibar is housed in a gray-green lacquered cabinet, custom-made for each room, and filled with a selection of local spirits and wines. Local flavor also extends to the bathrooms, which are elegantly outfitted with showers and fittings from the Axor signature line of Schiltach-based company Hansgrohe. Most of the superior rooms, as well as all junior suites and suites, have a free-standing bathtub—many with views over the neighboring parkland. Bath time luxury comes courtesy of Quercus amenities by heritage brand Penhaligon and exquisitely soft towels and bathrobes, while the Liberty duckling adds a touch of whimsy.