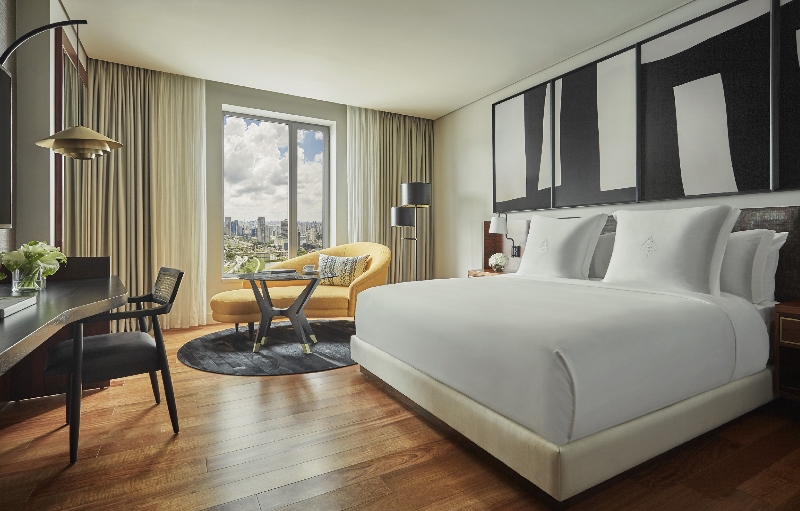 The new Four Seasons hotel, which has been designed by HKS Architects in partnership with Aflalo e Gasperini Arquitetos, will open this October…

The clock is ticking ahead of the grand opening of Four Seasons Hotel São Paulo at Nações Unidas, as the hotel prepares to open on October 15, 2018.

The all-new hotel is the vision of HKS Architects in partnership with Aflalo e Gasperini Arquitetos, with principle interiors including guestrooms, lobby lounge and public areas by San Francisco-based BAMO. Describing their vision as “bold and evocative modern, an international luxury aesthetic rendered in Brazilian materials and infused with classic Paulistano flavour,” the result is an art-filled hotel with pieces from Burle Marx, Francisco Brennand, Paulo Mendes da Rocha, among others. The interiors are characterised by locally-sourced finishes that create a luxurious yet welcoming environment for both international travellers and local guests.

“As the first Four Seasons in Brazil, our team is especially excited to introduce the customised experiences and personalised service for which the company is known around the world,” says General Manager Michael Schmid.  “Although many Brazilians who travel internationally are very familiar with the Four Seasons experience, the opportunity to offer something uniquely tailored to this city and connect with its citizens is important for us.”

Meeting planners and wedding couples will find 1,409 square metres (15,160 square feet) of flexible event space, also designed by EDG including a grand ballroom that can be divided into smaller function spaces, as well as seven additional rooms of varying sizes and two outdoor terraces.

The vibrant urban space will include enclosed and beautifully landscaped grounds, a BAMO-designed spa and fitness centre, and an ultra-modern indoor-outdoor pool.

Located amid the leafy green spaces along the Pinheiros river in southern Sao Paulo, the all-new 29-storey tower will include the 258-room Hotel as well as 84 Four Seasons Private Residences designed by Studio Arthur Casas, along with restaurants, spa, meeting rooms and other facilities. The Hotel’s address on Avenida Nações Unidas (Avenue United Nations) places guests just steps from corporate offices, plus shopping, entertainment and South America’s best medical facilities. The domestic Congonhas-São Paulo Airport is just 20 minutes away, and São Paulo International Airport is about one hour by car. Four Seasons Hotel São Paulo at Nações Unidas is the first Four Seasons location in Brazil, joining sister properties in Bogota, Buenos Aires and Costa Rica as part of the company’s growing Central and South American portfolio.