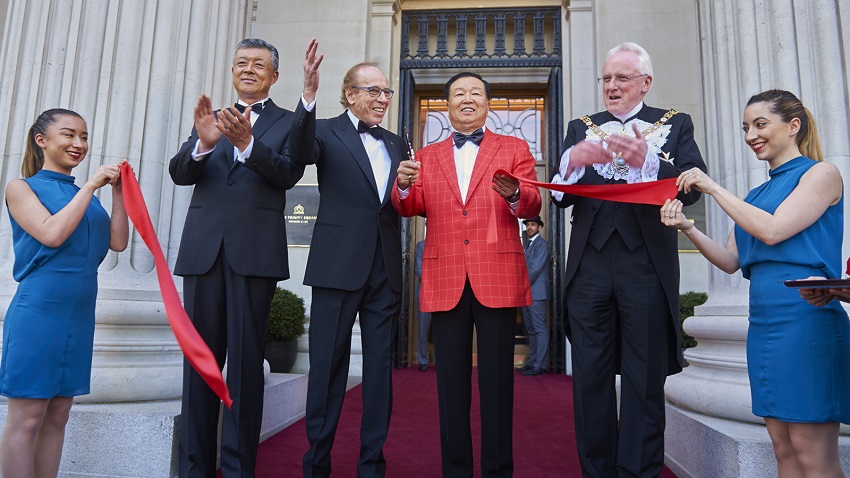 In celebration of the grand opening of Four Seasons Hotel London at Ten Trinity Square, Isadore Sharp, Founder and Chairman, Four Seasons Hotels and Resorts, Dr Chanchai, Chairman of Reignwood Group and Andrew Parmley, the Lord Mayor of the City of London gathered for a ribbon cutting ceremony at the hotel last week.

Coming together to mark the final stages of this spectacular seven-year project, the attendees gathered on the grand steps of Ten Trinity Square, the former Port of London Authority Headquarters, in a ceremony reminiscent of the original building opening in 1922.

After the ribbon cutting ceremony, guests enjoyed an exclusive concert in Seething Lane Gardens by Placido Domingo and a section of the London Symphony Orchestra, followed by a dinner reception in the hotel’s UN Ballroom, the setting for the inaugural reception of the United Nations General Assembly in 1946.

“The grand opening ceremony marks an important milestone,” comments J. Allen Smith, President and CEO, Four Seasons Hotels and Resorts. “Four Seasons Hotel London at Ten Trinity Square is a testament to our strong partnership with Reignwood and our shared vision for this magnificent property.” Continues Smith, “It demonstrates our long-term commitment to London, a city that continues to be the destination of choice for the world’s most discerning leisure and business travellers. As we extend our presence in this critically important market, the Hotel is the perfect complement to our existing property on Park Lane.”

Four Seasons Hotel London at Ten Trinity Square opened its doors in January 2017 and the project has continued to evolve. The next stage includes the launch of Asian restaurant, Mei Ume (opening in June) to complement the existing restaurants La Dame de Pic London, by acclaimed French Chef Anne-Sophie Pic, and the Rotunda. The hotel will also be introducing nine Heritage Suites and a Presidential Suite to follow in summer 2017.

Charlie Parker, General Manager of the hotel comments, “I’m proud to have been involved in the restoration of this landmark building. Ten Trinity Square holds such a strong place in the history of the City of London and this grand opening event celebrates all that this building will continue to offer for both locals and visitors to the capital.”