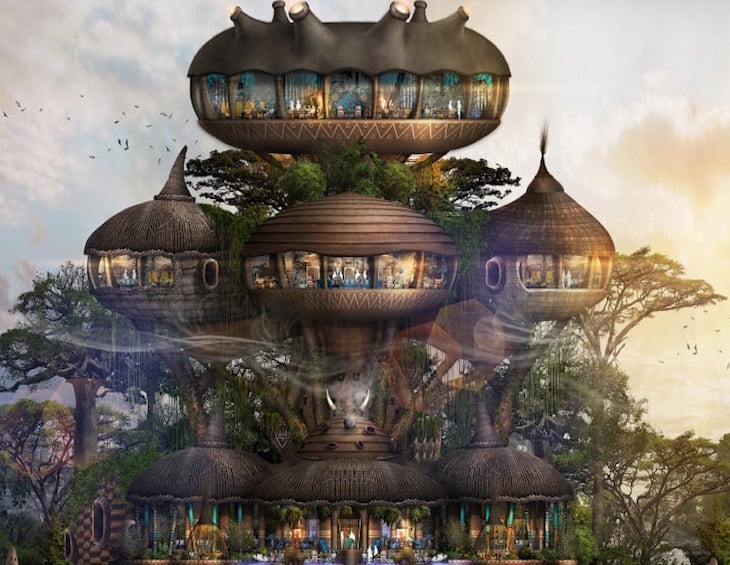 Architect Bill Bensley responded to a hotel brief by designing a hotel where guests are caged while wild, exotic animals roam free…

Known for his bohemian and brilliant ideas when it comes to sustainability, architect Bill Bensley has perhaps new creative heights by designing a concept to flip the idea of a zoo on its head, allowing animals to run free while humans in put in cage-like rooms.

CNN reported that the first phase of the eight-year WorldWild project, which will consist of several different top branded hotels, is slated to open in as early as 2023.

The ‘human zoo’ hotel concept, which will be targeted to luxury travellers who are seeking for unparalleled experiences, will shelter 2,400 ‘human cages’ that will actually look more like high-end, design-led guestrooms that frame an uninterrupted and uncorrupted view on natural the wildlife below.

The site where the hotel is being conceived is situated on a 2,000-hectare plot, which will reinstate wetlands to encourage biodiversity.

With the concrete aim being firm to free wildlife from captivity, Bensley’s concept has recently reached a milestone, gaining approval from Southern China’s Communist Party to relocate abused animals from zoos in the country, to be released onto the roughly 2,000-hectare piece of land where the ‘human zoo’ will be located.

Bensley’s latest wild concept will give animals the luxury of 95 per cent of the land to roam about in, while humans will reside in just five per cent of the grounds in the hotel.

Turning the Zoo concept on its head when designing a new hotel approach has raised further questions as to how hospitality can help to educate people on how to conserve areas that would not otherwise be protected.