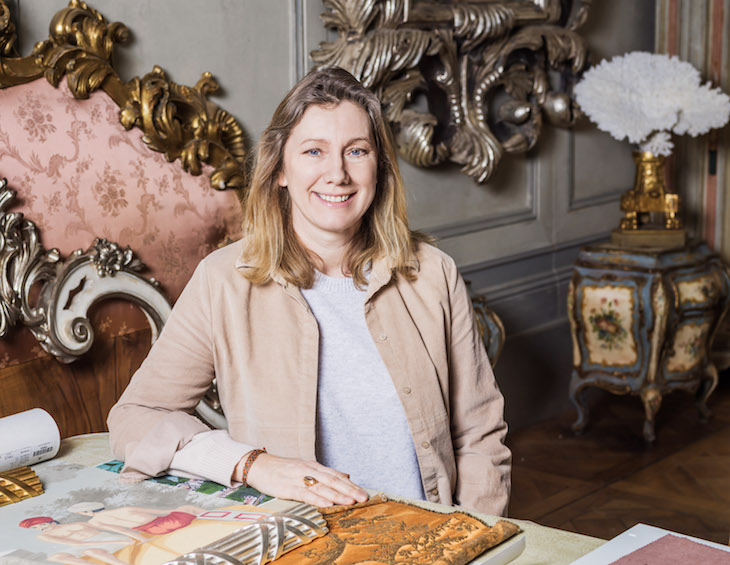 To kickstart our month putting ‘beds’ under the editorial spotlight, editor Hamish Kilburn speaks to furniture designer Louise Sawyer Bacou, Director at La Maison London, to understand the details, challenges and triumphs that came when confronting one of her most bizarre briefs to design a bed literally unlike any other…

As far as handcrafted furniture designers go, Louise Sawyer Bacou is on top of her game. Director of La Maison London, she has some impressive projects under its belt. Ilse Crawford commissioned the studio to fit out all of the bedrooms inside the iconic Babington House as well as Soho House New York. Compliment to the studio being able to sensitively answer just about any brief, the furniture designer and her team were tasked to furnish the rooms inside The Crazy Bear Hotel in Beaconsfield and add sensitive drama inside The Reading Rooms in Margate. And if that wasn’t enough, Bacou’s bespoke furniture pieces helped ‘set the scene’ recently in the popular Netflix feature film, Rebecca. 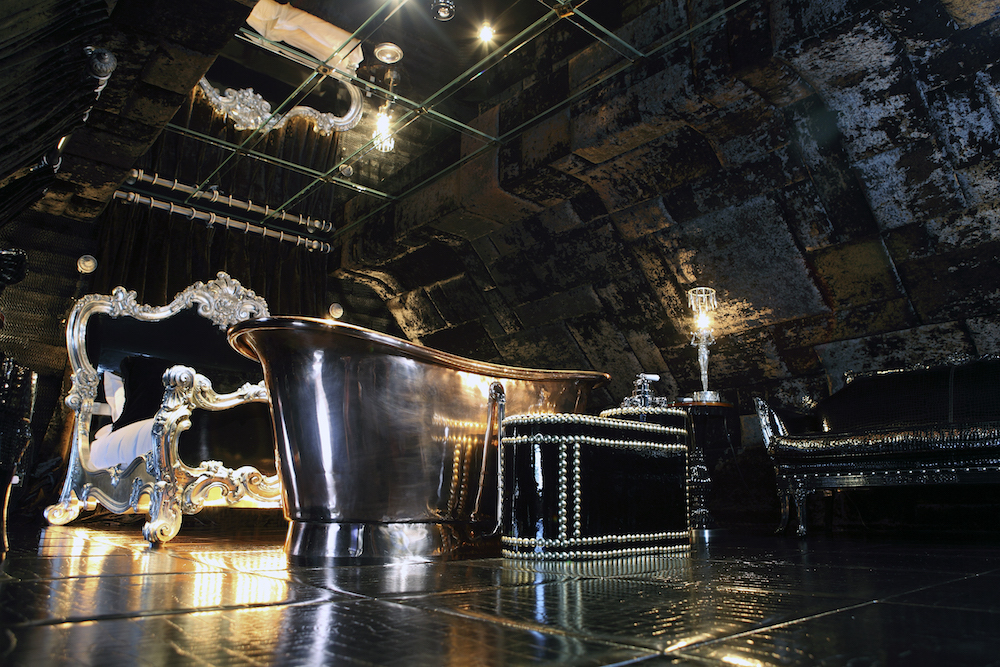 Image caption: La Maison London was commissioned by The Crazy Bear to design and make bespoke furniture for the rooms. | Image credit: The Crazy Bear 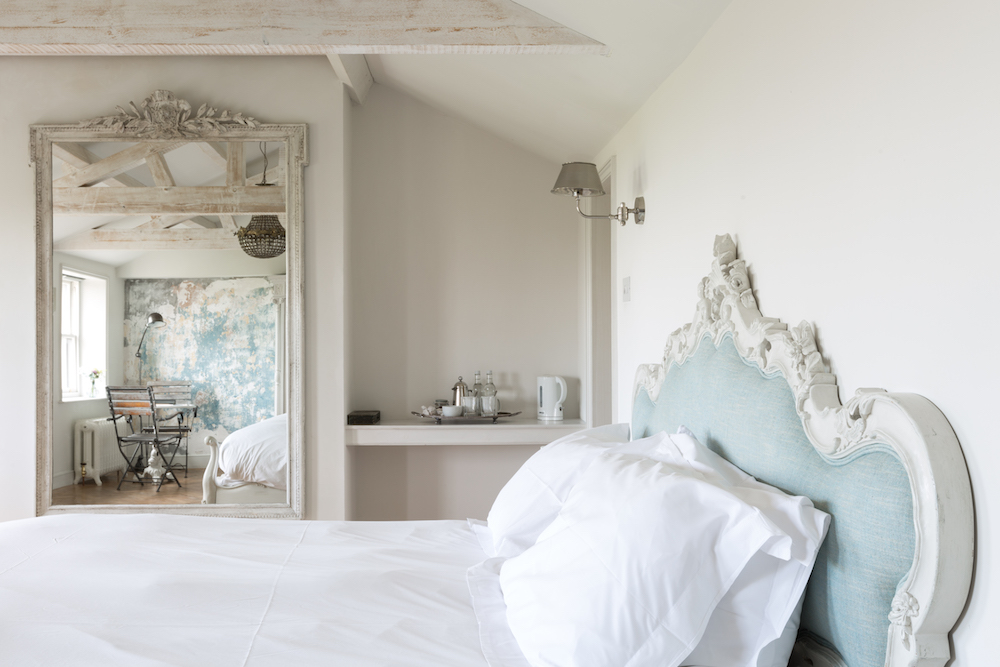 As impressive as these projects are, it was her bespoke – and slightly unusual – four-poster, double bunk bed that the studio designed and made for Serangoon House in Singapore that really captured my attention. The client, Satinder Garcha, the CEO of Garcha Hotels, was inspired by images of a Louis XVI-style bunkbed, which the studio had designed for its Made In House range. “He explained that, from the basis of what he’d seen, he’d like to have a four-poster bed made which could also function as a freestanding bunkbed and which could take a large mattress size,” Bacou explains. “This bed would be for his new hotel opening in Singapore with the idea that it could both accommodate numbers of up to four, when large families were travelling  together etc, and could also present itself as an elegant four poster bed for when a room was being booked for one or two people.” 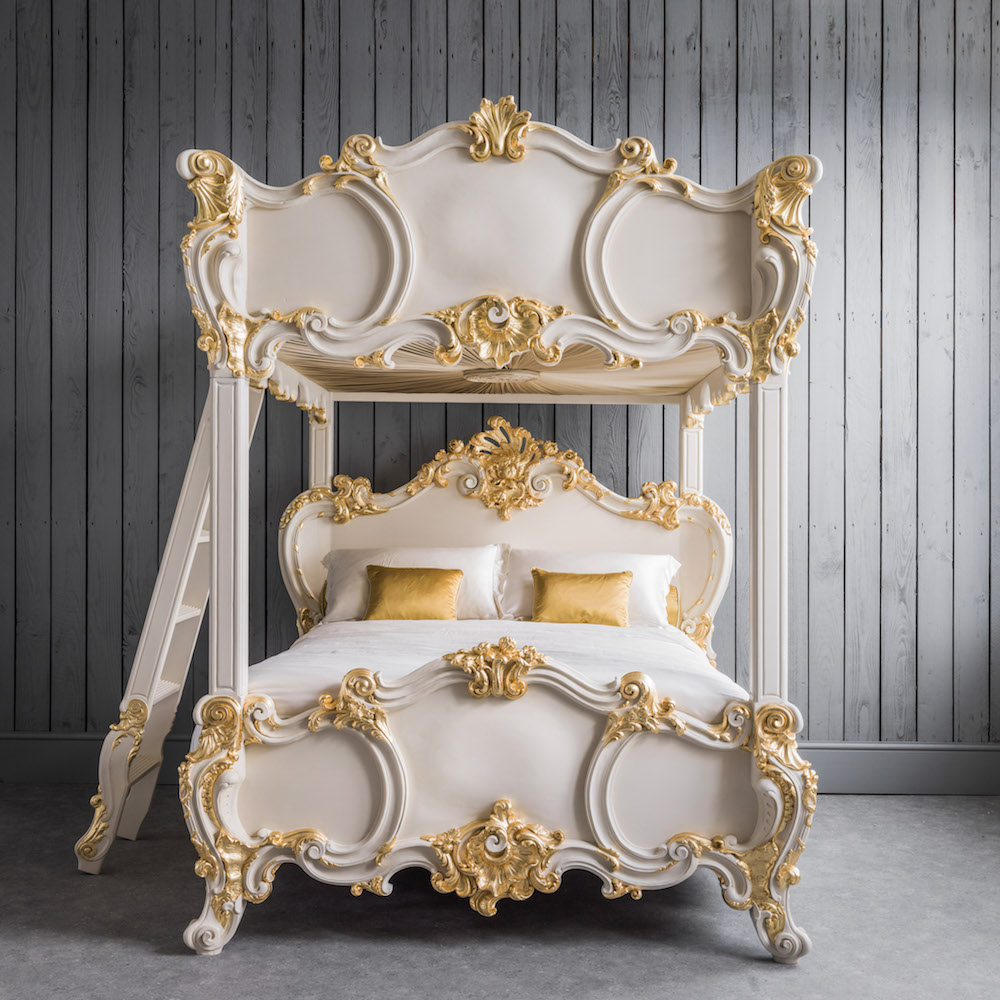 Image caption: A four-poster bed – commissioned by Satinder Garcha and made by La Maison London – which can also function as a freestanding bunk bed. | Image credit: Mel Yates 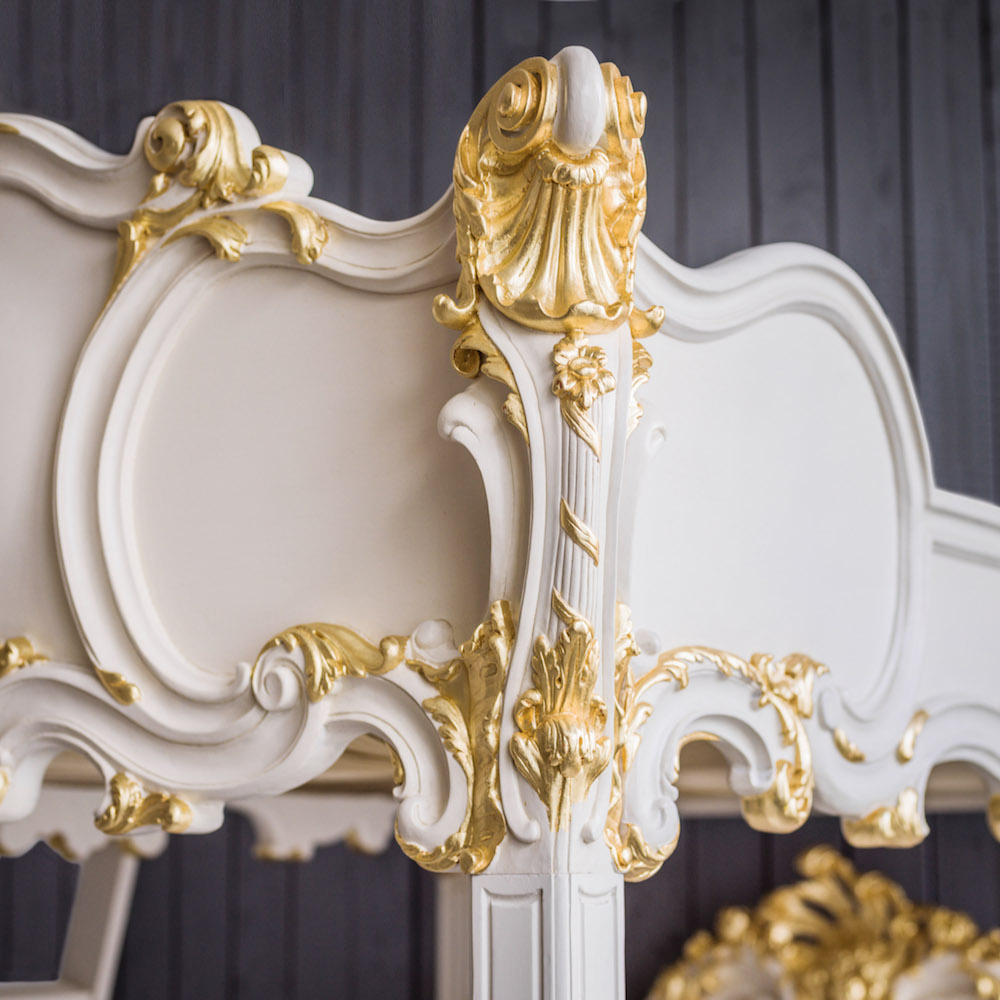 Image caption: The bed’s style is described by Louise Sawyer Bacou as “a symphony of Rococo S curves without any of the obvious straight lines that might easily lend themselves to a two tier structure.” | Image credit: Mel Yates

To mark the start of Hotel Designs putting the spotlight on ‘beds’ this month, here is my exclusive interview with Bacou, in which I learn how the designer’s ambition – not to mention her endearing inability to say no to clients – led her to complete one of her most unusual projects.

Hamish Kilburn: What were your first thoughts when you were were approached by The Garcha Group with this brief?

Louise Sawyer Bacou: ‘Inventive’ was my first thought; ‘complex to achieve’ my second; followed by a slow-motion moment while I tried to calculate all the numerous technical considerations a bed like this would require.

HK: And how did this project stretch your limits as a furniture designer?

LSB: The challenge was extended further when the bed that Garcha chose from our range, to style the new design from, was the ‘Cherub Bed’– a symphony of Rococo S curves without any of the obvious straight lines that might easily lend themselves to a two-tier structure.

Luckily though, I like a challenge and so bolstered by Garcha enthusiasm to have the idea realised, I set about to use all the tools at my disposal to make this work. Satinder is definitely a visionary which this good for design, as this type of person will always re-write the rules to have something new created.

HK: Culturally speaking, how was this brief different to any other that you have faced before?

LSB: Working in culturally diverse places, like London or Singapore, will always induce a creative, cross pollination of ideas – it’s something I’ve always been attracted to, so working on this project has allowed me to explore a fusion of ideas from two continents which I’ve loved.

There are times when what we do at La Maison London is quite purist, stylistically and technically – we use old-school methods and knowledge to achieve furniture that has an authentic language but when these same tools are used to push the envelope, it’s exciting to create designs that hold some of the old intrinsic values but are also reimagined as part of a new story.

HK: What were the main challenges you were confronted with during this project?

LSB: The first challenge was how to marry the aesthetic of a four-poster bed with the functionality of a bunk bed when each would usually work from quite different height perspectives. I had to find a balance between the two by using the lines of the bed to allow both scenarios to work, while taking into account the ergonomics of its use as a bunk bed. I may have made that sound simple but it took time.

Another challenge was that the style of the bed, to be Rococo, as it had no obvious lines that presented themselves for the columns. I created these columns to work aesthetically but also to allow them to have the best inherent strength for the bed, structurally, as a freestanding piece. These columns have also been reinforced with internal metal rods (for good measure) which run the length of the bed offering extra stability.

The challenge is always to find the harmony between form and function so that each aspect is enhanced by the other.

“I would like to use the skills and knowledge I’ve acquired over the years to create more re-envisioned pieces.” – Louise Sawyer Bacou, Director, La Maison London. 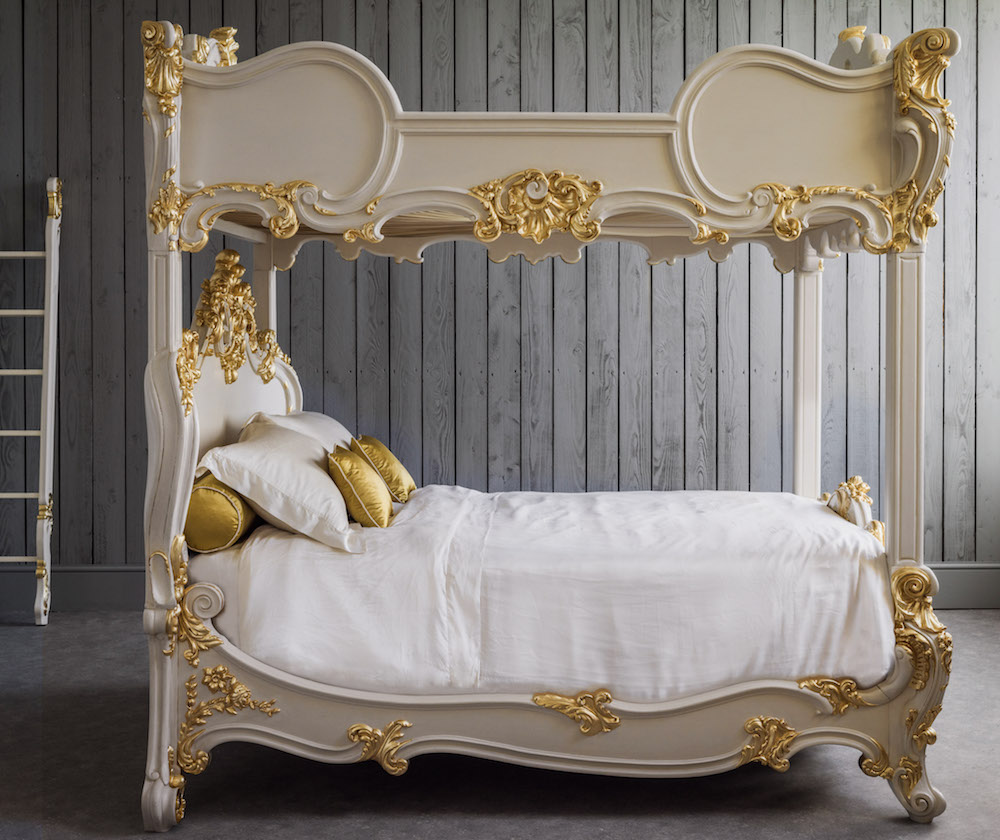 HK: Is there any furniture challenge you cannot solve?

LSB: I’m going to say no because I like design challenges. Going forward, I would like to use the skills and knowledge I’ve acquired over the years to create more re-envisioned pieces.

HK: With such a statement bed, how did you then confront the rest of the interior design?

LSB: The bed is the statement piece that holds the conversation in each room. I’ve chosen furniture, fabrics and palette that support the bed’s leading role and adjusted the story within the varying bedroom sizes.

The larger rooms lend themselves to a more opulent feel that the space allows, for the smaller rooms we’ve curated for a balanced feel. The furniture chosen for each room is beautifully crafted and finished to compliment the over all bespoke look we are aiming for.

Colour always has its own story and is linked to the tonality of light within any region so, for this project in Singapore and especially for the fabrics, I’ve used a palette of bejewelled colours to accent which has been a joy to work with.

HK: What was the most valuable lesson you learned during this project?

LSB: There have been many valuable lessons on this project – which is still a work in progress as the photos seen here show the prototype which has been just made for the mock up rooms. I think the biggest lesson came about, not least, because of the period we find ourselves in, globally.

There have been times when the metaphoric tides (and actual tide – read Suez Canal) seemed to work against the usual flows of production which depends on the smooth interactions across multiple borders (for all of us). Unusual situations came from many angles but I was amazed that everyone involved – from the team in Singapore, to the teams of craftspeople we’ve work since years, to teams in logistics – all worked, at every step of the way, to problem solve, to find ways through with a ‘can do’ attitude. This is something I will take with me: The ingenuity of people to create better outcomes in all outcomes.