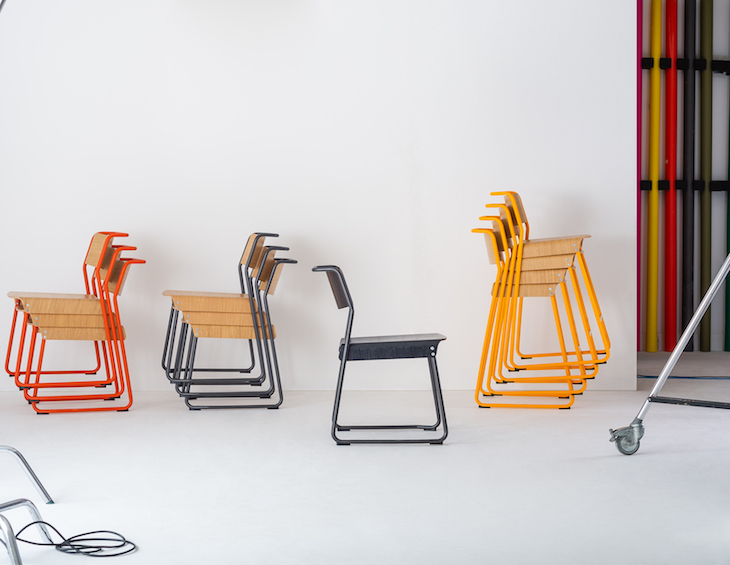 Strap yourself in for editor Hamish Kilburn’s annual round-up of London Design Festival (LDF). The 2019 edition was a thought-provoking insight into how the bare bones of the industry, led by innovative manufacturers working with open-minded designers and architects, are taking it upon themselves to design a better future of international hotels from the foundations upwards…

“Most cities are experts in one or two disciplines,” said Ben Evans, Director of London Design Festival. “But the breadth and depth of London’s expertise is unparalleled.”

For the 11th year, LDF was the epicentre of the design universe, publically displaying in full the ingredients to make the capital an incubator of ideas, creativity and something different.

Initially established in 2003 by Sir John Sorrell and Evans, the festival has grown to encompass a broad range of activities, and attracts visitors from around the world: last year welcomed a record-breaking 588,000 direct visitors from more than 75 countries, generating almost one million visits.

Despite Brexit call-to-actions being plastered across the front of the city’s major newspapers, the festival’s spotlight this year was thankfully not on the political landscape (or landslide) of whether or not this is really happening, but instead the lenses were focused on conscious change for good. With designers being now more aware than ever before on the need for design responsibly, sustainable products, materials and initiatives were evident in all corners of the metropolis, at all of the four Design Destinations. “LDF celebrates and promotes London’s design excellence in a period when showcasing creativity is even more important, adds Evans. And installations around the city from the likes of Matthew McCormack, Sony Design and Paul Cocksedge were a visual reminder of how design can influence change and educate wide-spread audiences of all demographics.

Neatly kicking things off after Hotel Designs led an exclusive roundtable at Arte Wallcovering at Design Centre Chelsea Harbour, Focus19 extended its luxurious arm to welcome a select number of pop-up stands. Whether green is or isn’t this year’s colour is irrelevant. What’s more important for hotel creatives is following how suppliers are turning up the volume on how they are designing with purpose and further bringing the outdoors in using sustainable methods. One area where this is very apparent is in fabrics and large prints – both of which are never in short supply at DCCH. Arte arguably stole the show with the launch of four new collections. Following last year’s collaboration with Moooi, any collection to launch after would be a tough act to follow, but the wallcovering experts delivered and the results are extraordinary.

While fabrics were strong, so too was lighting. Pookey Lighitng’s installation designed by The Brit List 2019 judge Florence Rolfe was a vibrant LED light show. Meanwhile, David Hunt Lighting cut the ribbon on its new permanent hub within the DCCH, showcasing its bespoke service as well as its intricate lamps. As well as hosting a captivating talk with the lighting company’s founder, Vaughan, unveiled a new collection of simple, yet extremely chic sculptured lamps as well as a new range of Tribal Collection shades, that were first unveiled at last year’s show.

Elsewhere, collaborations from the likes of Barnaby Gates, Kit Kemp and others were on display under what will soon become the Design Centre Avenue, but during Focus was a pop-up exhibition of pure, untouched talent.

Making its bold, colourful entrance, 100% Design celebrated its 25thbirthday with a bold line-up of speakers, including David Rockwell, Marcel Wonders and Daniel Shofield among others.

Following last year’s move to London’s Olympia, the show found its feet in historic halls as visitors flocked to see the plethora of interactive installations, cutting edge collections and plenty of products. The Two Lovely Gays unveiled an piece entitled Insta-interiors, which featured a playful mix of pastels. “Social media can has brought design to everyone in a way that we love,” the studio explained on its stand. But it can also be a confusing arena, with so many images and ideas vying for attention. Our hope is that it opens up a new freedom in design, promoting diversity and confidence.”

With a noticeable shift in behaviours, especially in public areas of the hotel, it is no surprise that there was a significant focus on furniture. Taking centre stage directly opposite the show’s doors was Benchmark with its latest collaboration with design legend David Rockwell. The Sage Collection has a specific focus on human health and wellbeing. Made with natural, sustainable and non-toxic materials, it meets the standards required for well-certified buildings. The collection includes slick sit-stand desks and tables, dining and meeting tables, high-low sofas, benches, occasional tables and storage.

Hamilton Litestat also exhibited its impressive answer to personalising the hotel experience, by being able to colour-match its products to suit any hotel design brief – something that I saw in person recently when visiting the studio’s Bristol-based hub. 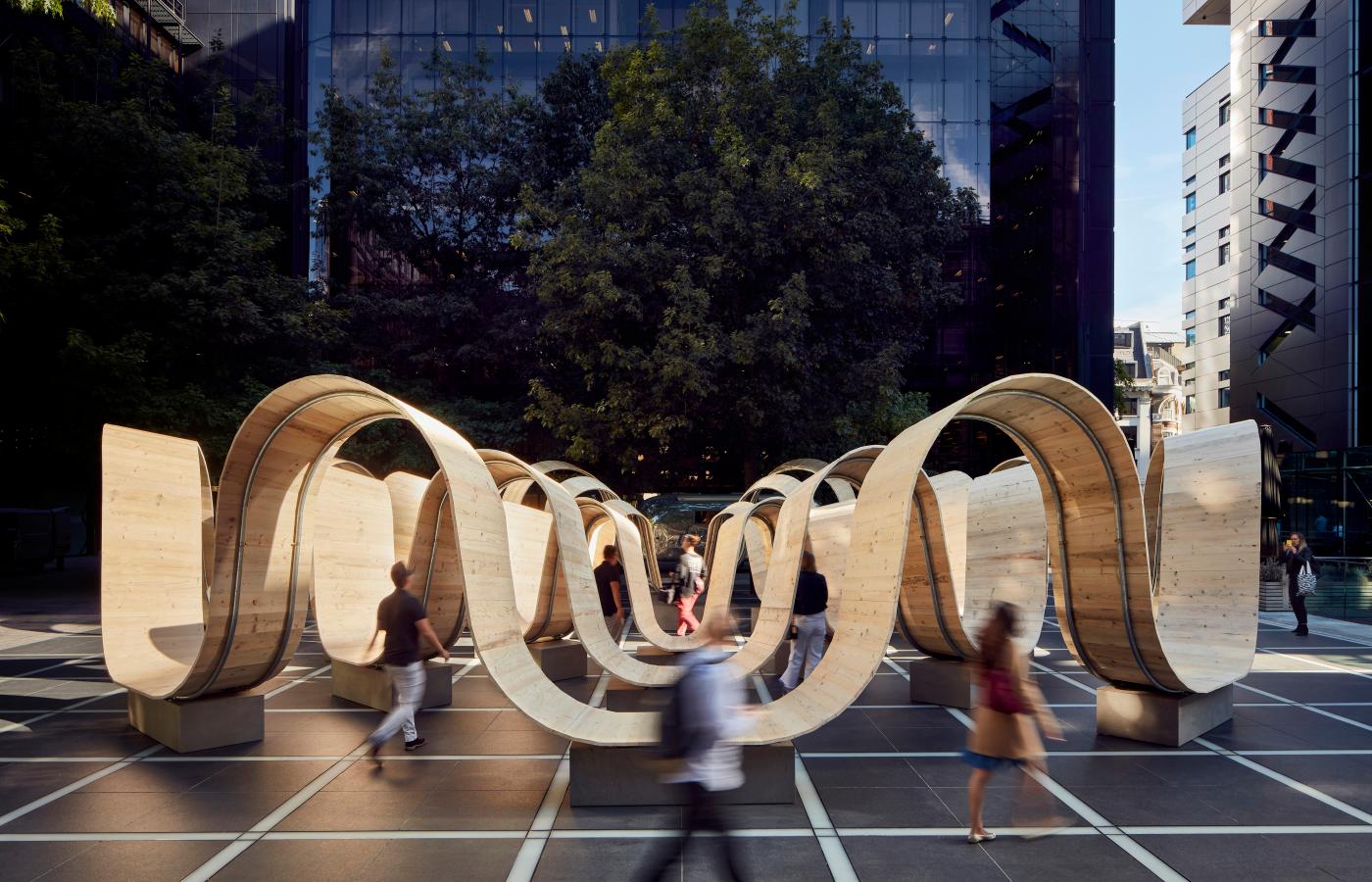 In the midst of LDF, just as the feet of the design community start to tire, the VIP party for designjunction comes alive. Offering exclusive access into the show 24 hours before it opens to the public, the event is typically a great opportunity to network as well as catching new products on the market. This year’s event unveiled its catwalk for trends alongside the exclusive Tom Dixon party. Taking place in what I can only describe as LDF’s most interesting design districts, Coals Drop Yard, the event arrived fabulously fashionably late (as ever) to the week-long party.

While the talent sheltered inside was fresh, the narrative of designing responsibly was solid and synonymous among many if not all brands exhibiting at the show. Furniture brands and lighting manufactures put an equally significant emphasis on utilising recyclable materials. Sixteen3, for example, showcased a dynamic range of contemporary furniture pieces that were made from 99 per cent recycled material, while over in the light tunnel, designer Huw Evans unveiled The CONCERTINA COLLECTION, which comprised of both furniture and lighting. Using natural timbers, English Ash and Cherry, the designer accentuated the drama of the product’s raw form by with carefully positioned up-lighting. Meanwhile, Qiang Huang used inspirations from dissembled bike parts to design an equally precise lighting piece. The product follows research that suggests that by 2020, it is estimated that there will be 10 million shared bikes reaching their scrap age, which equates to a staggering 1.6 million tons of solid waste, which Hauang believes can be reduced by designers looking more outwardly when it comes to recycling products and materials.

Whether or not designjunction created a larger mid-week statement than last year’s show on The Southbank is down to interpretation. There was, however, no denying that it sheltered something for everyone, including a number of engaging talks. For that reason alone, it is certainly not an event that should be skipped over when navigating around LDF in future.

Keeping an understated mantra in the heart of Shoreditch, London Design Fair was this years’ stand-out show for Hotel Designs, because of its ability to allow the products and exhibitors to do the talking. The show, which took place on the iconic Brick Lane, featured meaningful themes, such as biophilic materials and design as well as showcasing the only bathroom pavilion during London Design Festival – highlights of which included Roca’s new collection with Armani and West One Bathrooms’ eco-themed stand.

In addition, the show included its worldwide theme, allowing regions in all pockets of the world to exhibit a little bit of their own personalities and creativity.

As a result, London Design Fair focused on form, function and looking forward, past tomorrow’s trends, to globally identify pieces that will really help to change and shape the landscape of international hotel design.

While the installations, projects and districts differed in style, the thread between each was very much about confronting convention and offering something different, an abstract reality, if you like, of London through the eyes of the creatives.

LDF provides a platform like no other that time and time again harbours creative talent and fascinating stories of product design in action. And with variety being the spice of the life, as so many wise bodies have announced before, this year’s exhibitions were in heavy supply of something different, something new and something fresh for everyone.