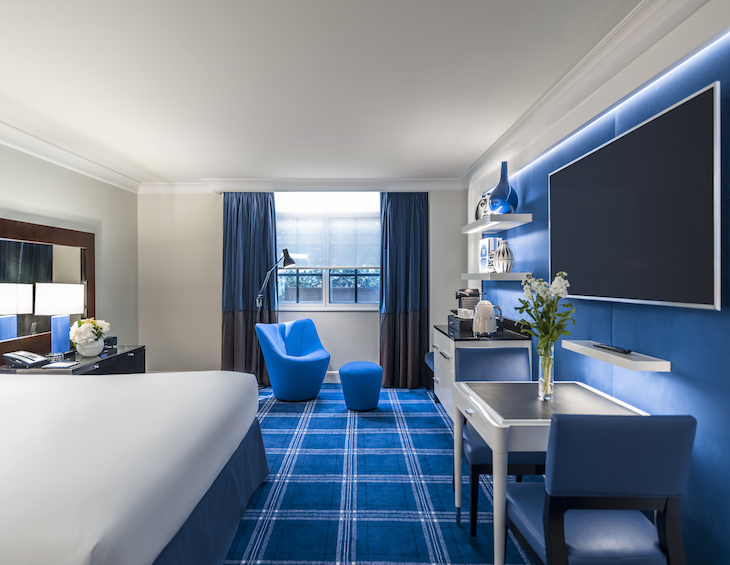 17 years after first unveiling the original designs for the Sofitel London St James, Pierre-Yves Rochon returned to London to breathe new life into the 183-key lifestyle luxury hotel. Editor Hamish Kilburn, along with a production team to film his response, checks in find out more…

The ultimate compliment for a hotel designer, aside from a client signing off one stage allowing them to move on to the next, is being asked to return back to a project years later to lead it sensitively into a new era. This scenario, although rare and therefore highly momentous, also comes with certain pressures, considering that each and every decision will be scrutinised by client and critic and compared to the statement design scheme that was originally unveiled and considered a success.

For Sofitel London St James, a flagship for the global hotel brand that is positioned in between Westminster and Mayfair, the decision to invite legendary designer Pierre-Yves Rochon back to redesign the guestrooms and suites was one that came naturally. And it was his ability to combine English décor with refined French elegance that gave this hotel’s interiors a new and somewhat an unexpected personality.

“It was important to preserve the identity of the hotel that was created 17 years ago.” – Pierre-Yves Rochon

To truly capture the essence of this modern hotel sheltered in a heritage building, I checked in with our product team at CUBE Video to explore what makes this hotel special. Here’s how I got on…

“It was important to preserve the identity of the hotel that was created 17 years ago,” Rochon told Hotel Designs. “So, there was a clever mix between the elements of the past that we have kept and the new elements marking the new decoration. For example, we kept the headboards and bedside tables the same, but we created a new concept in the guestrooms and suites, which we refer to as the ‘Media wall library’.” 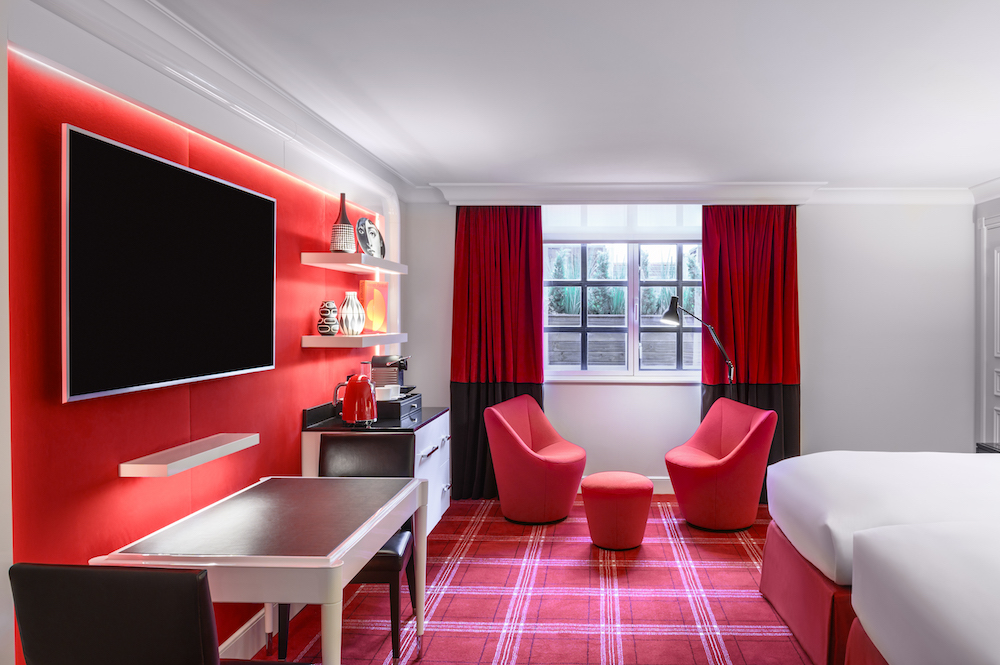 Inside the new guestrooms, which are complete with retro furniture and bold colours, it is clear that the aim was to, in Rochon’s words, “give a new life to the hotel.” To prevent each room in either green, red or blue colour schemes from looking ‘tired’, and to refine a modern interior design scheme fit for the flagship status it has been given, Rochon’s bold leap away from convention allowed him to further blur the definition of what a London hotel should look like. The tartan carpets, for example, create a textured layer of detail but also compliment the 1960s – 70s theme explored in the design scheme, as Rochon explains: “The choice of Scottish-inspired carpets in the bedrooms is, of course, linked to the fact that we are in the UK, but another reason we choose these carpets was because of the geometric appearance which corresponds to this particular period of design in the 1960s and 70s.” 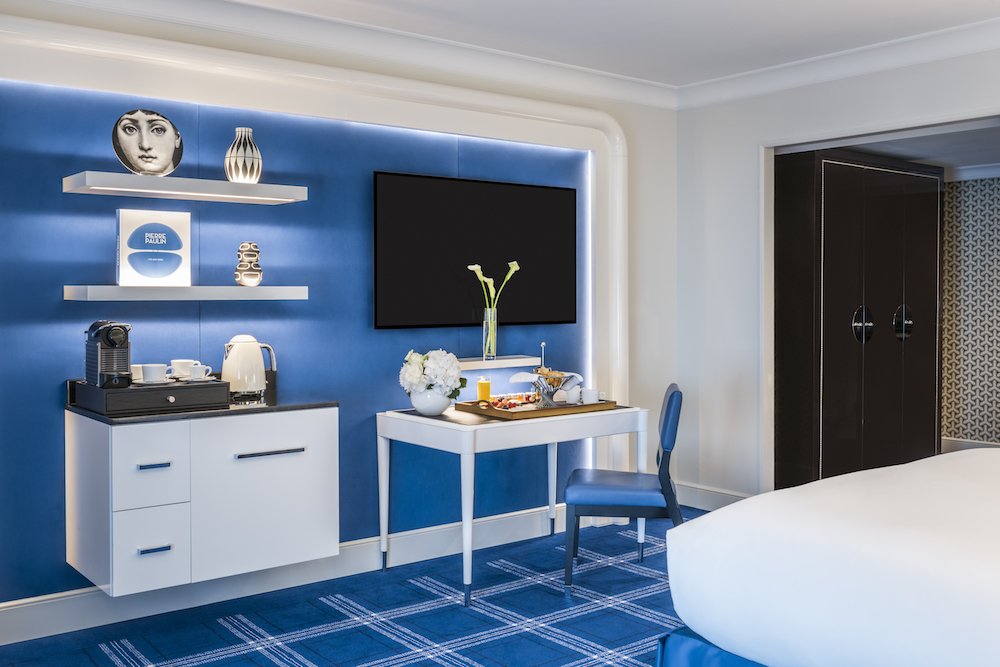 Throughout the hotel, there is a dominant theme of English Style meeting French elegance. While the guestrooms are trendy with certain nods to British iconic fashion figures of the 60s and 70s, the bathrooms are chic, well-lit and with a black and white colour scheme they are also somewhat timeless. “The bathrooms have always been appreciated by the hotel’s guests, so we simply decided to refurbish them when necessary,” said Rochon. “This included improving the lighting, creating showers and redesigning the floors in black and white graphics, in continuity with the original decoration.” 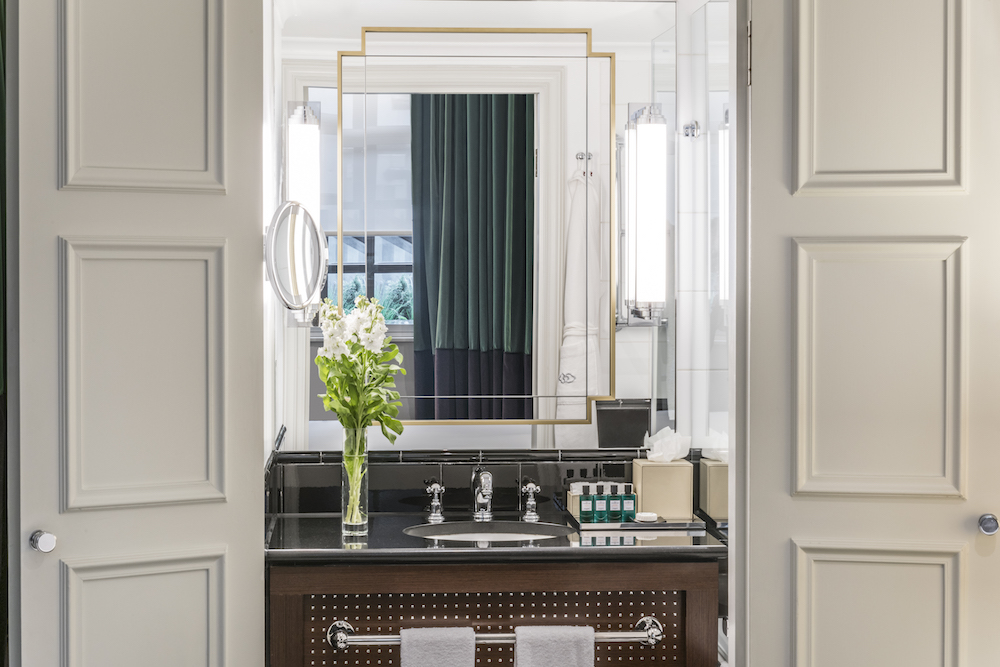 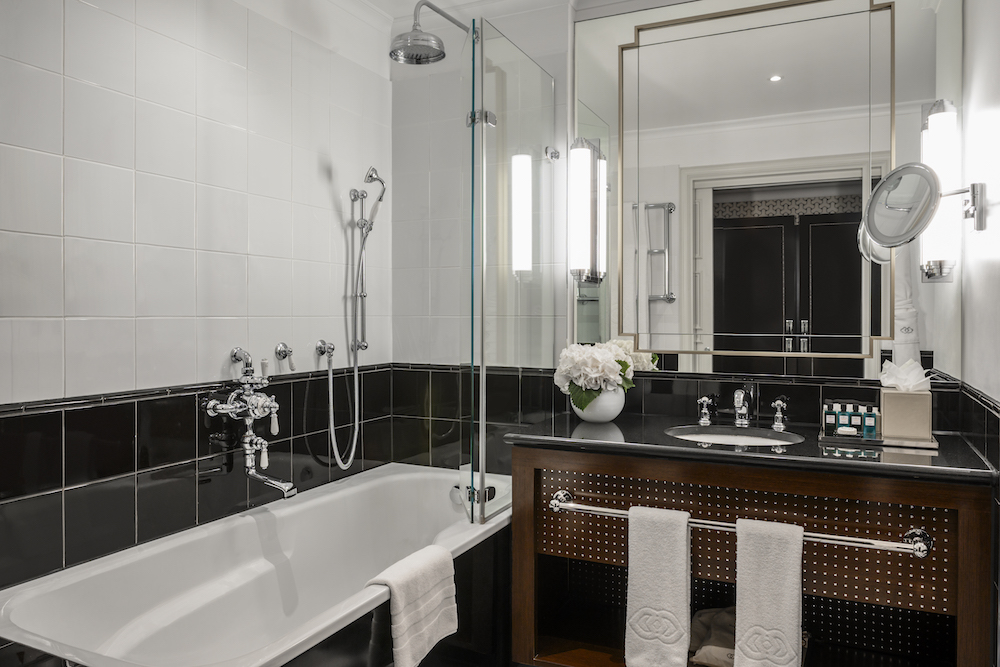 When asked, Rochon admitted that the most challenging aspect of the renovation was staying within budget, “while also respecting the decorative spirit” of the hotel. Regardless of having to stay between the lines of a budget, it is admirable how one designer’s creativity can lead one hotel into two different eras, and as a result re-unveil a modern masterpiece that lives up to its flagship title.