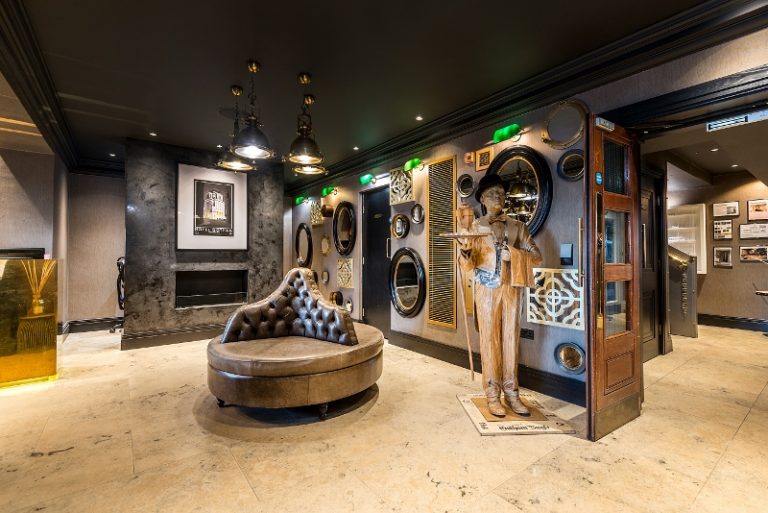 As Manchester continues to turn heads on the hotel design scene, editor of Hotel Designs Hamish Kilburn checked in to check out Hotel Gotham’s bold and decadent interiors – all sheltered within a former bank…

Ever since its bold entrance onto the unapologetically loud Manchester scene in 2015, Hotel Gotham’s alluring charm has tantalised many senses of those who have passed through its spectacularly framed automatic doors. I, for one, am one of them, and I hold my hands up proudly to say that I have formed a lust for decadence and luxury since checking in.

Expect disruptive interiors that are balanced with effortless style and a narrative threaded throughout the whole building that will take you right back to ’20s glamour.

Manchester’s answer to Gothic-chic is often the heart of the action of the city thanks to the vivacious General Manager, Mario Ovsenjak. It’s this action captured within Hotel Gotham, almost on a need-to-know basis, that helped first raise the bar in hotel design in the North in order to compete not only against its London counterparts, but also against luxury hotels around the world. Because Hotel Gotham is, quite frankly, unlike anywhere else around the globe.

The concept was to create timeless luxury with the ability to take guests away from the city centre below they know and love and into a different universe entirely, all while remaining sensitive in restoring moments that capture the hotel how it used to be. Think Art Deco meets the Batcave. 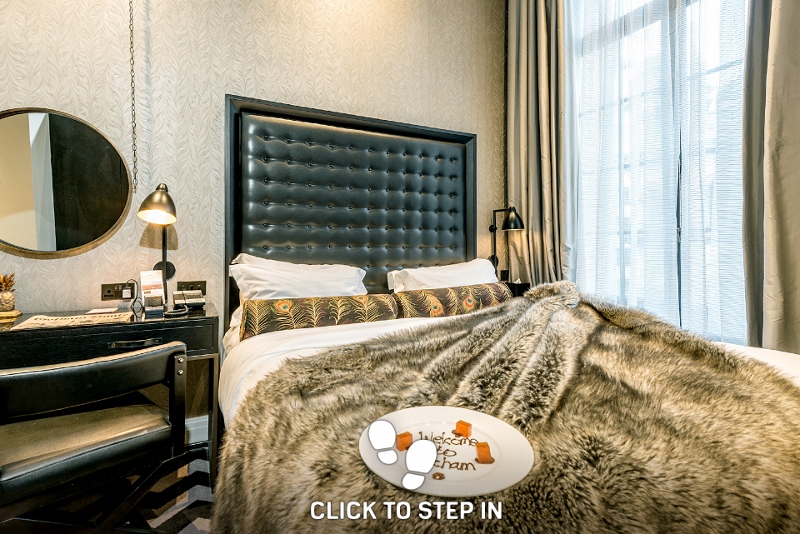 The entrance, under the watchful focus of the building’s gargoyles, is surprisingly understated given its majestic shell. Designed to emphasise a theatrical greeting from magnificently dressed porters, as if themselves are part of wider performance or an extension of the interior styling, the doors to the hotel are more like a curtain to a stage. Look up and all is not what it first seems. The ceiling is made up of numerous upside-down umbrellas – not for the superstitious I must add – painted in black and gold. These elements are special because they didn’t quite work out according to the original plan. These items were supposed to arrive painted gold underneath and black on top, but it wasn’t until the interior designers erected the first one when they realised that they had been designed to be gold on top and black underneath. Today, the subtle reference to Manchester’s inevitable downpour is cleverly injected and hides the secret well.

Checking in on the sixth floor is an unusual experience to say the least, but an experience I have seen work before, at the W Amsterdam for example. Unlike the raucous, wild and fashion-forward W brand, though, Hotel Gotham’s lobby experience is private and provides and secluded and personal welcome. Just a few steps along and guests are greeted into a large and airy Honey Restaurant, with its own personality. The hotel describes this place as “Whatever Honey conjures up for you”, the 2 AA Rosette awarded restaurant offers guests to dine overlooking Manchester from an unmatched perspective.

Downstairs, the guestrooms and suites shelter the true character of Hotel Gotham. Disruptive interiors balance a seductive, playful misé en scene, yet still feel like a home from home – like a modern designer’s sanctuary… The zig-zagged, soft Newhey carpets and the striking pink accents in the furniture and the inside of the drinks cabinet add flair in all the right corners. Meanwhile, the oversized beds, complete with faux fur throws, make lying-in a privilege. 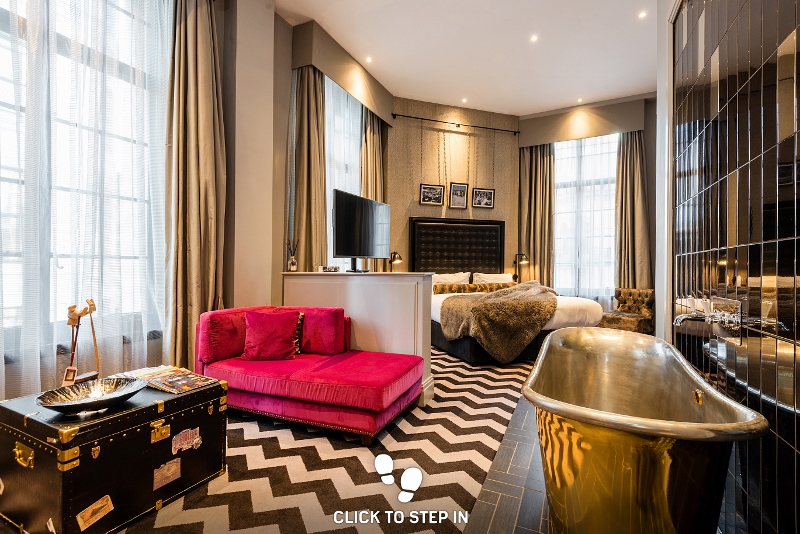 Challenging the convention of traditional luxury hotels, the most premium category rooms at Hotel Gotham do not boast the most premium views of the city – in fact they boast no view at all. Instead, cleverly I believe, the five Inner Sanctum Suites – each named after an iconic Manchester figure and featuring a huge ‘wonderwall’ screen – are vaulted within the core of the building. Windowless and worlds away from anything happening in the city below, the suites’ sharp cinema screen projections onto panelled wallcoverings offer various atmospheres, not just the one that Manchester wants you to see, including the intriguing narrative of Hotel Gotham characters.

The real showstopper is located on the top floor (floor seven), and is reserved for guests and members only. The history of the building is quite literally written on the walls in the bar. The surfaces are lathered in gold, giving more than just a subtle nod to the bank that the building used to shelter. The bar and lounge area naturally over-spills onto four separate terraces that together capture a jaw-dropping view over the city and beyond.

Bespoke Hotels recently announced that it was to open the 191-key The Brooklyn to Manchester, which will pay ‘homage to the Golden Age of New York City’. This follows Top Hotel Projects revealing a rather large development growth of luxury hotels in Manchester, with 18 first-class and luxury hotel projects listed for the city with 2,907 rooms in the pipeline – eight of which are slated to be unveiled in 2019. The Brooklyn, which will become the younger brother – or sister – of Hotel Gotham, is expected to share the same disobedience, and rightly so, as the hotel group arguably continues to lead the way in the city with endless possibilities that help to broaden the ever-changing landscape of hotel design in the North.