Checking In: MOB Hotel Paris, where it all started

Checking In: MOB Hotel Paris, where it all started

On the doorstep of Paris’ infamous flea market, MOB Hotel Paris – the original MOB – is designed ‘for the people’. Editor Hamish Kilburn checks in to see where the MOB Hotels story started…

In order to understand MOB Hotels’ style, ethos and energy you must first, in my opinion, meet the man behind the brand.

Cyril Aouizerate, the CEO of MOB Hotels, is a gentleman who eats, sleeps and breathes MOB Hotels, which he created last year and believes that a great hotel is designed around great people. “My desire to was create movement,” he told me when describing the brand’s origins. “My objective is to use the hotels in our portfolio to create a new vision in the world that a hotel is more than just a bed for the night. That is why, for me, understanding the culture of each of our hotel’s location is so important.” That movement started in Paris and has since moved into Lyon as well as there being plans for a 2020 opening in Washington D.C.

Hidden among red and orange buildings, the entrance to the 92-key MOB Hotel Paris is surprisingly understated and worlds away from the stereotypical view of postcard Paris. Instead being among of chic neighborhood of shops and cafes, the hotel is in the heart of an urban adventure, located just south of the Saint Ouen, north of the city centre. It’s not immediately obvious that the two buildings, which were disused telecom factories only a few years ago, would shelter a quirky design-led boutique hotel. But expecting the unexpected is something that all guests should prepare when joining the MOB way of thinking.

Much like the Flea Market that borders the property, the architecture firm BBC Architecte created MOB Hotel Paris around the raw energy and creativity of the brand. The lobby inside is complete with wooden trunks as pod-like reception desks and very wears a bohemian personality. Simple yet productive, the space is a relatively empty shell that is curated only with stylish pop-up-store merchandise. 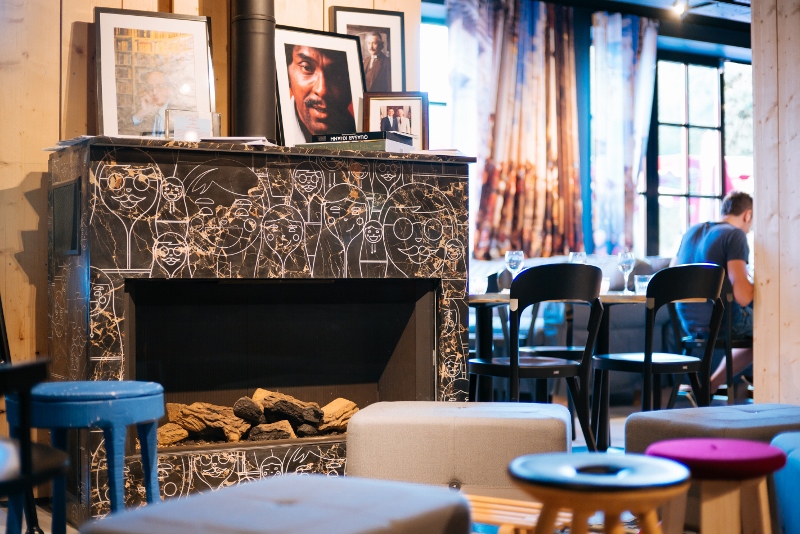 The first real indication of Aouizerate’s unravelled creative mind comes when walking through the lobby and into the open-planned, lounge-like restaurant. With interiors by Kristian Gavoille et Valérie Garcia, the walls tell a story of comedy with fruits and vegetables being personified and remembered with plaques – my personal favourite among them being “R.I.P Mister Eggplant, who died for Baba Ganouche.” Furthermore, the large curtains that separate the restaurant from the conservatory, at first, look like they are printed references of The Last Supper. However, on closer inspection, all is not what it first seems. Famous faces in both the design world, from the likes of Philippe Starck, and significant figures in popular culture, such as Barak Obama, have been printed on the fabrics to add character and offer a further reference to Aouizerate’s involvement in the design process and decisions.

Upstairs and although the comedy is softened, the style of each guestrooms is equally as edgy while also remaining thoughtful to the needs and requirements of guests checking in. In the bathrooms, which are tastefully positioned without creating too many unnecessary barriers, include Duravit fittings, Geberit WCs and Villeroy & Boch showers. Although the mustard yellow carpets and peachy pink walls in the guestrooms may not be to everyone’s taste, the unique headboards that are made to reference theatre stage curtains cannot be ignored as a quirky and unique feature to entice guests to tell their own narrative.

Complete with a Fatboy beanbag, low-level furniture from IKEA and mobile spotlight lighting, the guestrooms are idiosyncratic to say the least, but also balance within them a sense of play and can adapted to suit the needs of whoever is checking in. With a strong message to bring guests together, there are deliberately no TVs in each of the rooms, but projectors and iPads can be provided on request. 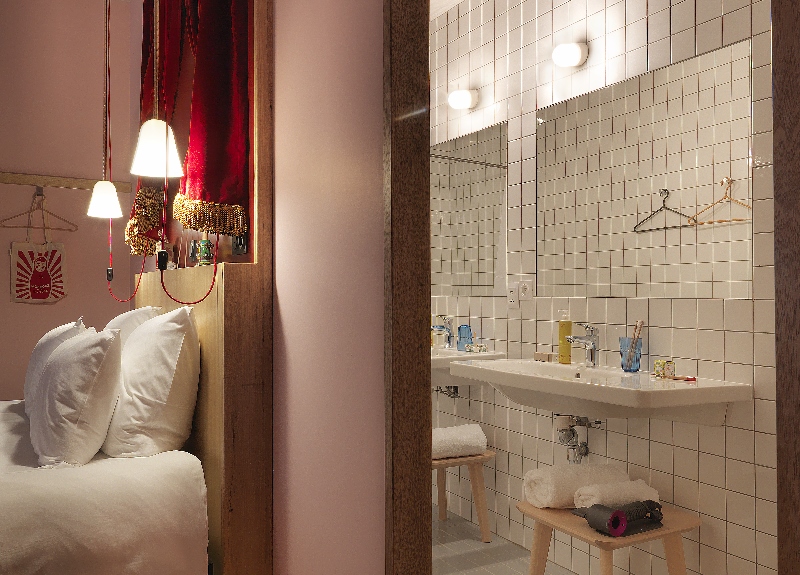 The dictionary definition of mob is “a large crowd of people, especially one that is disorderly and intent on causing trouble or violence.” Although the brand isn’t planning on causing any violence or trouble, it certainly is ready to cause a scene. With plans for the brand to broaden out as far as Washington D.C., the Paris MOB is also expanding. Just down the road, the skeleton of a new kind of MOB is taking form. MOB House, which is expected to open in January 2020, will pride itself on a sheltering a different style. The hotel’s interiors are being imagined by non-other than award-winning designer and long-term friend of Mob Hotels, Phillipe Starck.