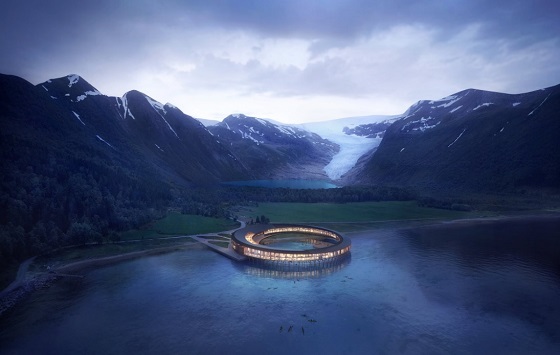 The world’s first energy positive hotel is set to open in 2021 will generate enough energy over the course of six decades to pay for its entire construction, its day-to-day running and its own demolition.

The Svart Hotel also just so happens to be architecturally miraculous. At the base of a tremendous ice glacier, the sustainable project will by sympathetic to its community while pushing the boundaries of science.

The Svart, when completed, will be the world’s first ‘positive energy’ hotel in that is should, technically, cost the Earth nothing. On top of its miraculous energy generation stratgy, the hotel will consume 85 percent less energy than a traditional hotel. 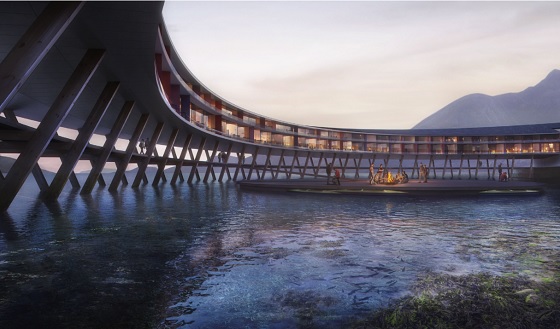 The hotel will be built in the Norwegian region of Salten, and will glow by night like an extra terrestrial that has landed on the open ocean. A complete circle, the structural feat is as impressive on the eye as it is on paper and will have an upper and lower deck; the lower for boarding canoes and leaving the hotel for ice climbing and hiking, and the upper for living quarters.

The eponymous ‘svart’ is the local name given the dark blue ice that forms the Svartisen glacer, which can be seen from the windows. The hotel is built using local wood, inspired by the houses built by local fishermen and used to dry fish for local dishes.

The project is a collaboration between designers Snøhetta, Arctic Adventure of Norway, and Powerhouse energy.

Snøhetta said in a statement: “Building in such a precious environment comes with some clear obligations in terms of preserving the natural beauty and the fauna and flora of the site. It was important for us to design a sustainable building that will leave a minimal environmental footprint on this beautiful Northern nature”.

“Building an energy positive and low-impact hotel is an essential factor to create a sustainable tourist destination respecting the unique features of the plot; the rare plant species, the clean waters and the blue ice of the Svartisen glacier, says Founding Partner at Snøhetta, Kjetil Trædal Thorsen”.