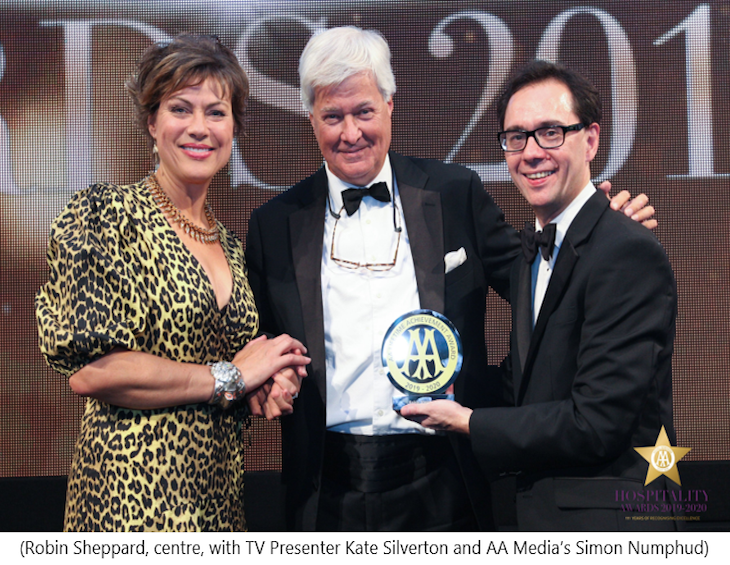 Bespoke Hotels’ Chairman, Robin Sheppard, has been honoured with the Lifetime Achievement accolade at the 2019 AA Hospitality Awards.

Having co-founded Bespoke at the end of 1999, alongside Group CEO Haydn Fentum, Robin enters his 50th year in the hospitality industry, a sector he has described as “the most wonderful family” that comprised “a fellowship that I cherish, but which I could never have anticipated when starting out”.

Now 64, Robin has no thoughts of retirement, and is increasingly focussed on promoting accessible tourism via the Blue Badge Access Awards, alongside encouraging young people to enter hospitality and have a career to be proud of.

Presenting the Lifetime Achievement Award, Simon Numphud, Managing Director of AA Media, referred to Robin’s 2004 diagnosis of Guillain-Barre Syndrome, which resulted in paralysis from the neck down for a period of several months. Following two years of relentless physiotherapy, Robin was ultimately able to return to work and has gone on to spearhead Bespoke’s ongoing growth.

“Robin has been an inspiration to us all”, he stated. “With his career made even more remarkable by the exceptional challenges he has overcome, as well as his involvement in the creation of the Blue Badge Access Awards and appointment as chairman of the Institute of Hospitality.”

“I’m actually on cloud nine”, added Sheppard. “I have just got married, and it’s not often you spend the second night of your honeymoon in the company of 1000 people at Grosvenor House!

“I’ve been around the block a few times, but I’ve no intention to slow down yet. It’s a tremendously exciting time for Bespoke Hotels, with the team currently focused on opening three properties in 2020: Hotel Brooklyn in February, with the Telegraph Hotel in Coventry, and Sun Street Hotel, near Liverpool Street in London, launching later in the year.”

Bespoke Hotels entered its third decade of operations in 2019, and now stands as the UK’s largest independent hotel group with over 200 properties represented worldwide. Co-founded in 1999 by CEO Haydn Fentum and Chairman Robin Sheppard, Bespoke has enjoyed consistent growth and now manages over 9,500 hotel rooms, with £815 million in assets, and 8,000 employees under its wing.

“While the business itself has transformed dramatically over the preceding two decades, I am immensely proud to say our principles and focus have not changed”, he added. “Bespoke has been a fantastic chapter in my career, where I have learned a huge amount from my colleagues, and been able to develop and put into practice many of the ideas I stumbled across in the preceding decades; not forgetting to have some fun along the way, especially in creating our flagship Hotel Gotham brand. And we are far from finished yet!”