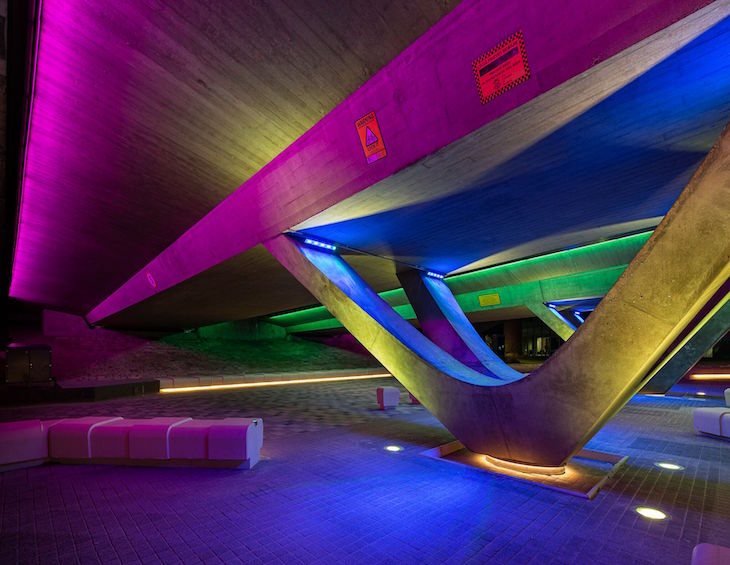 The winners of the Surface Design Awards 2020 have been announced at the 15th Surface Design Show in London. Editor Hamish Kilburn was at the breakfast ceremony to catch the winners being crowned…

The Awards, hosted by author and independent event organiser Aidan Walker, celebrate excellence in architectural projects worldwide and the materials used in their creation.

The impressive Krushi Bhawan from Bhubaneswa, India by Studio Lotus was named the Supreme Winner, as well as winning the Public Building Interior and Public Building Exterior categories. Capturing the admiration of all the judges Krushi Bhawan is a testament to design, created for the Odisha State Government’s Agriculture Department in India. The centre incorporates an eye-catching façade drawn from vernacular materials and narratives, which responds to the local climate and offers glimpses into the region’s agricultural folklore and mythology, which have been envisioned at an unprecedented architectural scale.

Judge Paul Priestman of PriestmanGoode praised the project’s sense of place, stating “This building characterises part of the world. It’s a lovely reflection of culture using local materials.” Glenn Johnson of Collins Aerospace added “Somebody’s heart and soul is in this building.”

Across 14 categories in total, from retail and public buildings to commercial projects and housing, including new categories public realm and affordable housing, the Award’s entries comprised the best in architecture and design from across the globe. Giles Miller Studio, Mikhail Riches and Chris Dyson Architects from the UK, Steven Holl Architects for the USA, and Kris Lin International Design from China were amongst those shortlisted.

Launched six years ago, the Awards have continued to grow in stature to become one of the most respected accolades in the design awards realm. This year’s shortlist comprised an impressive 39 projects across the 14 categories. Such was the quality of entries submitted that some projects won nominations across several categories. Demonstrating the truly international reach of the Awards, projects on the shortlist spanned 13 countries from 34 different organisations with emerging practices represented, as well as established firms.

The judging panel commended both the high quality and variety of entries within the field of surfaces and materials. The entries in the new affordable housing and public realm categories were particularly praised for their innovation and diversity in their respective sectors.

WilkinsonEyre and Zeidler Architecture’s CF Toronto Eaton Centre Bridge won in Public Realm after being admired for its avant-garde design. Goldsmith Street, based in the UK and designed by Mikhail Riches with Cathy Hawley, was applauded for its warmth and community feel by the judges, and was announced the winner of the Affordable Housing category.

With sustainability at the top of the agenda throughout the design industry, the Sustainable Surface Exterior and Sustainable Surface Interior categories captured the judge’s attention. Crystal Palace Park Café by Chris Dyson Architects, with its external cladding in half round cedar shingles, was the exterior winner whilst Muse Acoustic Panels, by Woven Image in collaboration with Michael Young won in the interior category.

The Housing Exterior category had an outstanding level of bespoke entries. House on an Island, by Atelier Oslo and Kebony, was rewarded the winning position with judges admiring the building’s relationship with the nature that surrounds it. Winning the Housing Interior award, the elegant 20 Kings Road, London was highlighted for its complementary and sensitive use of materials.

Designed by Arup, University of Sheffield Concourse’s bold simplistic lighting was congratulated for making it a destination rather than an area to get through quickly, by creating a multi-use space to encourage students to sit, dwell and relax. Nikki Barton, British Airways, said Arup has “completely transformed and enhanced the space,” with the entry being awarded the Light and Surface Exterior award.

Captivating the hearts of the judges, the Yashoda Cancer Hospital’s open sky courtyard creates a focal point for the New Delhi hospital, and gives patients a place to escape and be surrounded by greenery. The pergola above the courtyard is made using a combination of colourful hanging glass panels which create a light-well filled with colourful shadows within the core of the hospital. The installation, designed by Studio An-V-Thot Architects, was highly commended for its commitment to creating a less-hospital-like environment for patients, being awarded the winner of the Light and Surface Interior.

Putting education at the forefront, Vora’s Can Rosés Temporary School claimed the Temporary Structures award for the redesign of an ancient Spanish farmhouse into a school for 3 years use. The judges were impressed by the innovative repurposing of an existing structure to create a school space with great character, which after the period of use will be easily dissembled.

The winner of the Commercial Building Exterior award was the expressive linear form of the Nobu Hotel Shoreditch by Ben Adams Architects, whilst Kingdom Design Studio by Kingdom Industry in the USA gained the Commercial Building Interior award. In an effort to be resourceful Kingdom Industry’s design utilised raw materials in such a way as to elevate their intrinsic quality, creating an experience for visitors through differing break-out spaces, materials and environments used throughout the space.

United Cycling LAB & Store, which distributes and sells high-end brands for the bicycle market in Northern Europe, was named winner of the Retail Building award. Its first ever flagship-store and showroom was designed by Johannes Torpe to reflect the underlying principles of the company, creating a space that fosters knowledge, learning and innovation.