Mirror, mirror on the wall, how do I meaningfully design reflective surfaces? 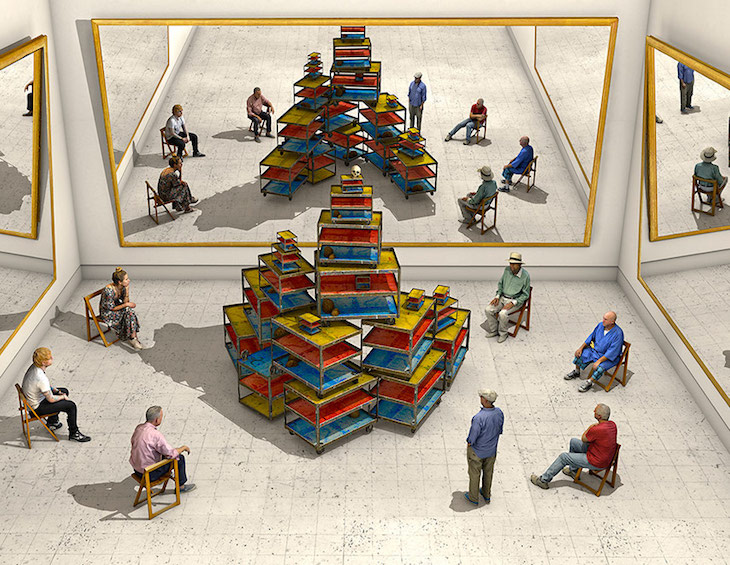 Reflective surfaces mirror a fascination for us all. Whether viewed across a becalmed lake or through an ornate framed reflection over the mantel place they each are seemingly a portal to another world. Designer Peter Mance, the director of MAAPS Design and Architecture, explains…

For interior design, mirrors and reflective surfaces are a material superpower and an integral component of how MAAPS reimagines and designs space.

Once solely a mystical surface and religious metaphor for divine interpretation by Scryers and Soothsayers, mirrors are seemingly a portal to another world. As such, reflection continues to carry a residual sense of visual mystery, fascination and wonder, whether viewed across a becalmed lake or through an ornate framed mirror above the mantel.

In the context of architecture and interiors, mirrors retain a magical ability to bend, extend, and morph our perception of and our relationship to inhabited space. Hovering between two and three dimensions, and in the fleeting moment of transparency, mimicry, and illusion, one’s imagination and perception of reality both instantly undergo four remarkable kinds of spatial transformation through a looking glass. This is what Plato refers to as a “visual spirit” which zips from the eye to a mirror, is reflected back to the observer’s face, thence to the mirror again, and finally back to the eye…

The first mirrored surfaces recorded are in found in polished artifacts dating back to 600BC. Hero(n) of Alexandria (15 to 75AD), a Greek mathematician and engineer who invented the steam engine, extols the many virtues and practical applications of refraction and reflection in his work of Catoptrica.

His explorations and observations form the philosophical foundations of perception and understanding of visual reality.

Later, and more menacingly, the power of reflected light was deployed in warfare by Anthemius (of Tralles) in ~500AD. Adopting a central hexagonal mirror and an encircling corona to guide the light of the sun to a single point of focus, Anthemius created the “burning” mirror – effectively the first analogue laser capable of incinerating approaching fleets or armies.

Greek explorations seeking answers to the secret of light and perception, and later taken up by Arabic scholars, were lost; then rediscovered and translated into Latin to be studied anew throughout Europe during the Renaissance period. Murano in Italy became the epicentre of glass and subsequently mirror technology during the 15th & 16thC. It is no coincidence that Venetian artisans evolve the highly coveted skill of applying tin backing to glass sheets

As Italy’s economic dominance wains during the 17thC, France’s unrelenting desire to acquire the secrets of mirrors finally succeeds when three Murano masters are bribed and transported into France. The Hall of Mirrors at the Palace of Versailles is the first dramatic spatial expression of this transfer of knowledge and breaks the Venetian monopoly of this magical surface. The captured technology of mirror making is here wielded by the Sun King as a regal platform, reflecting and multiplying the ornate splendour of this spectacular room and the expansive gardens beyond – representing a kingdom of infinite opulence.

Mirrors in a public place provide a collective shared view and simultaneous private view. We are constantly intrigued, anticipating what may happen consciously when these parallel views states and individual perceptions of realities collide. A tantalising, fractured kaleidoscope of splintered shards of illusionary reality are experienced as space and time are transformed by these glamourous and beguiling surfaces.

Humankind are one of the few species that can intellectually comprehend reflection and identify ourselves in a reflection. It is interesting to note that we often describe our internal mental landscape and moods using outward spatial perceptions – to reflect, to gain a sense of perspective.

The mirror is a unique facet of a noetic experience within the places in which we dwell and inhabit. Providing an internalised realm of calm meditation of what we see. Sometimes pleasurable, occasionally surprising or reassuring, often strangely disconcerting, the act of catching oneself in a reflective surface is so fundamental to our continual assessment of ourselves. The viewer, through their observation is necessary reflected, and the conscious moment of evaluation, place, and time, is instant. 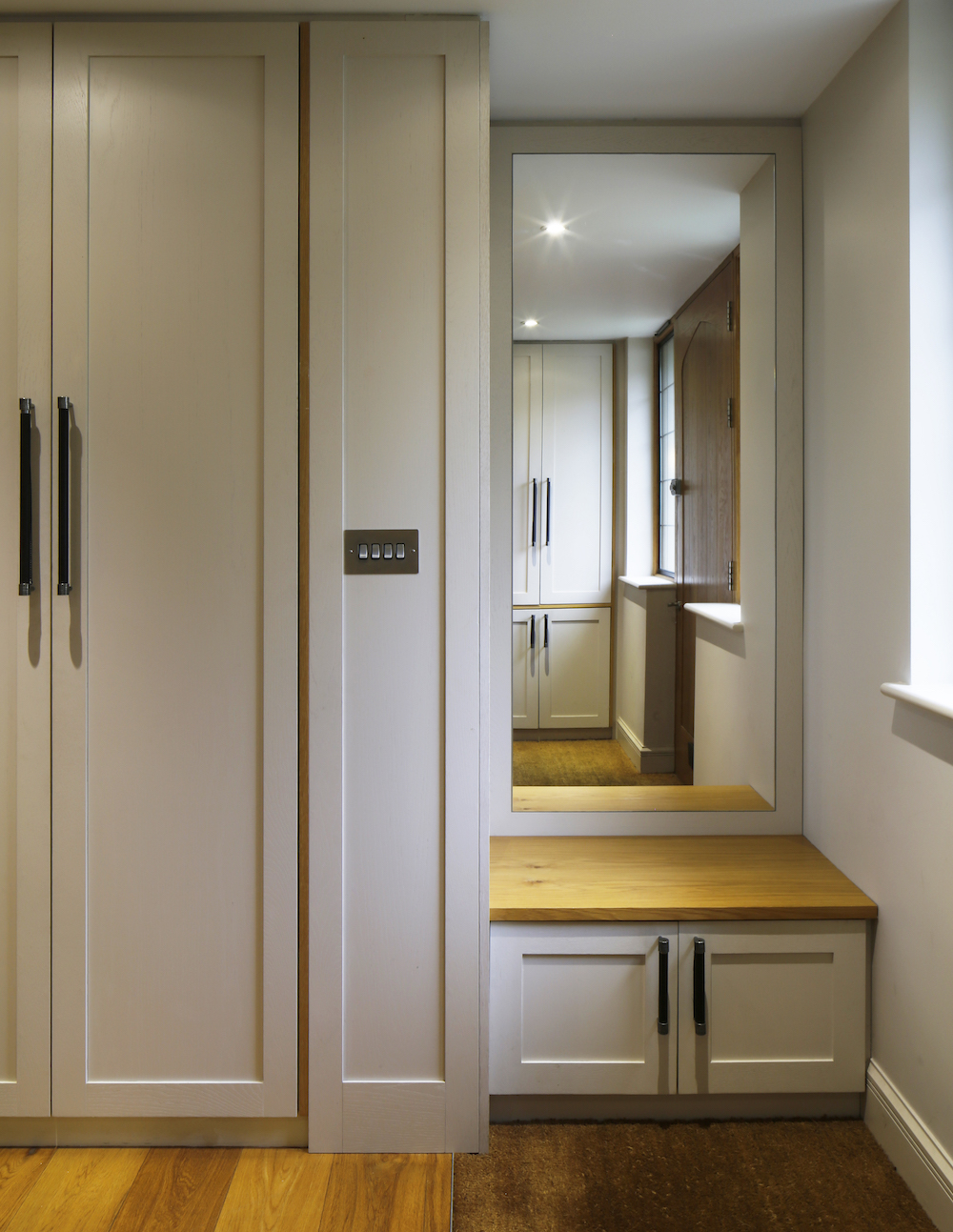 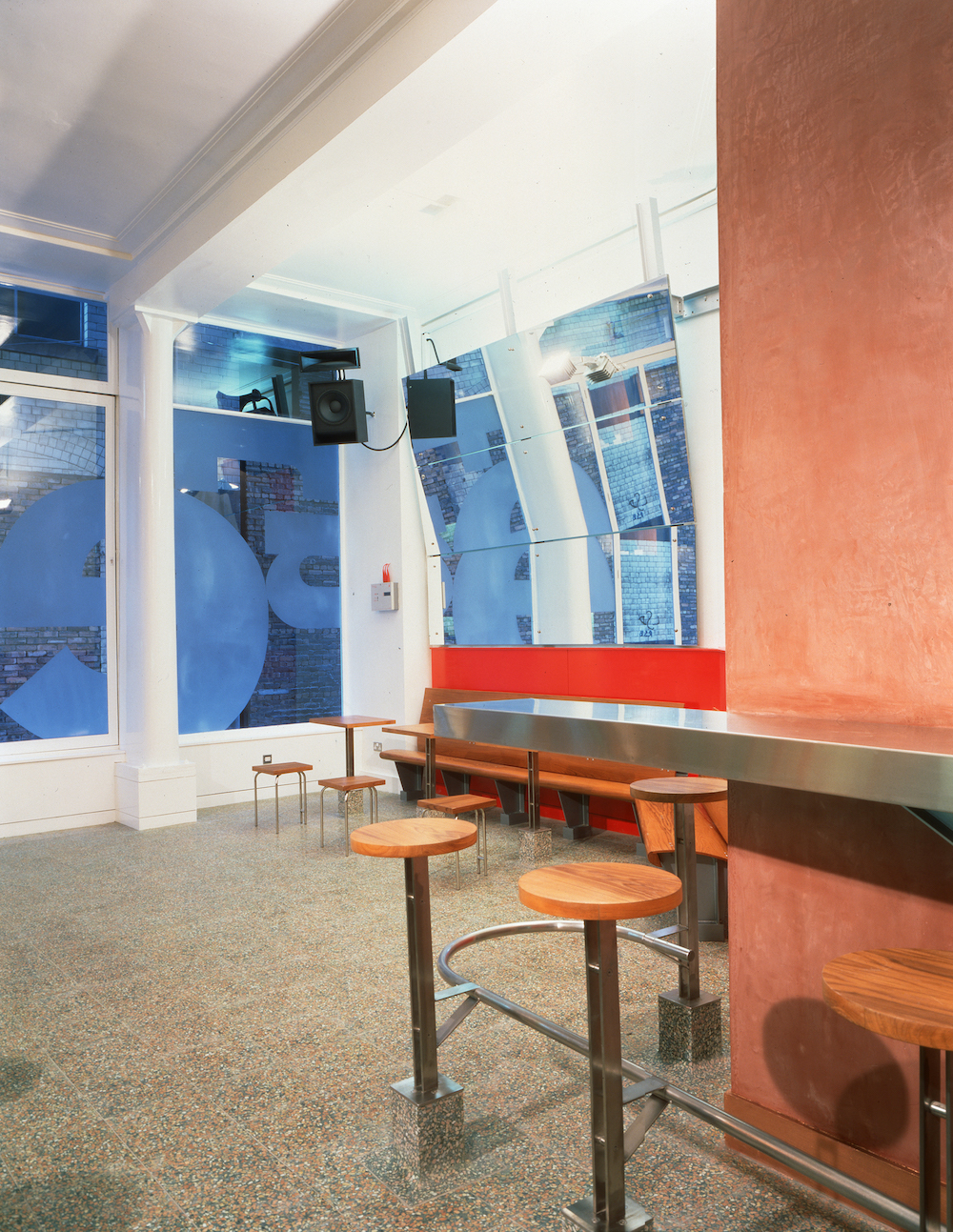 Designing with mirrors is to invite a space to transform and open. The use of a large statement mirror can make a small room appear much larger than it is, particularly if the mirror encompasses an entire wall, is placed in a central location, or even if it is shaped like a window to create the illusion of openness and space beyond. 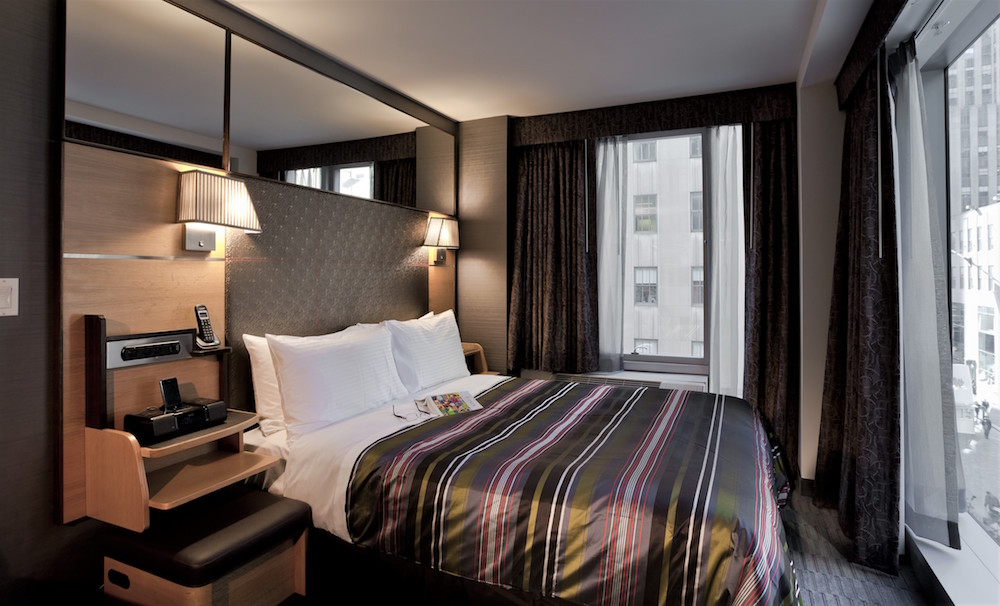 Depending on the size, shape, placement, and ornamentation of a mirror, it can serve a variety of different aesthetic and functional purposes in an architectural or interior setting. Mirrors can act as spatial camouflage, layering, collapsing, and disrupting the passage of light.  Within interiors mirrors can be considered as deliberate object, or as a mass surface, a portal, or as a focusing device.

Glancing views providing anticipation of approaching spaces, providing visual intrigue and pull, a sense of discovery, and self-animated movement. Mirrors positioned close to the line of the ceiling visually appropriate illusionary volumes and breath into the implied space beyond.

Ultimately, mirrors possess a chameleon quality and can dramatically transform a built space, where an interior either expands or dissolves and our visual experience of perception is shifted. Whether mirrors serve to accentuate an existing interior, lead you visually through to another space, tease and stimulate our curiosity, keep the imagination engaged, or simply to characterise a newly built space, they are versatile devices and instruments of light. 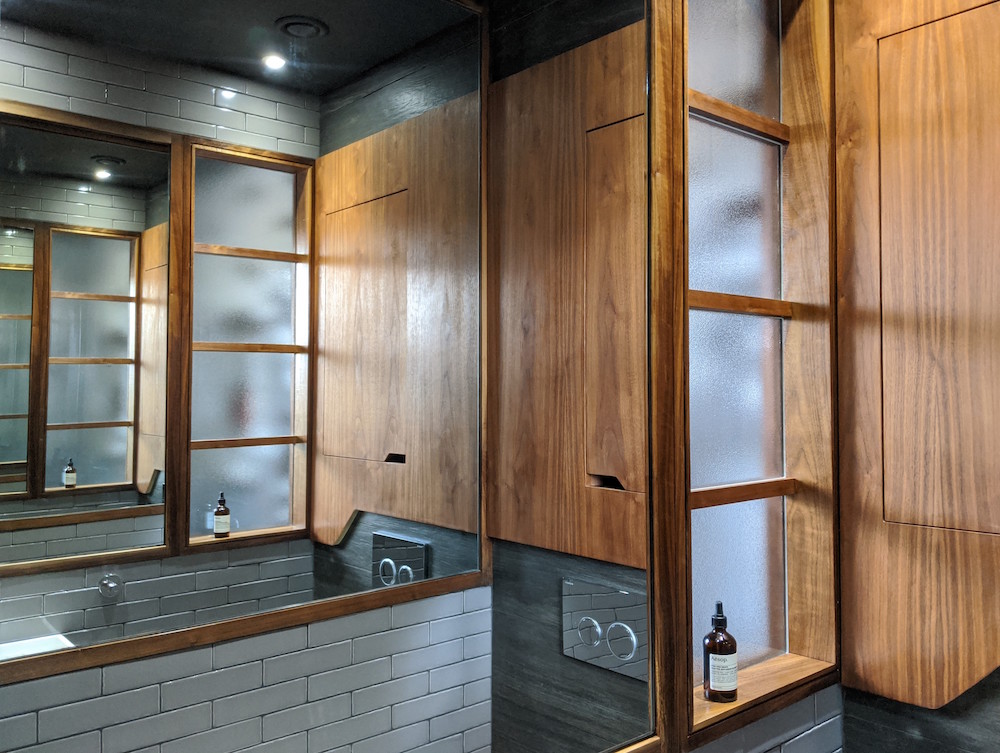 Therefore, it is only natural as designers that we want to celebrate reflection within the interior as both a quality of physical and mental space. In a constrained bathroom, 900mm wide, we played the Infiniti game and applied mirrors to directly opposing surfaces. The smallest room transforms into a meditative space for expansive contemplation.

Soane’s s use of light and mirrors is perhaps the most captivating aspect of the museum interior for us. Many of the principle rooms are delightfully augmented and subtly rendered with natural lighting effects and carefully positioned mirrors. Perhaps seen to greatest effect in the Library, Dining Room and Breakfast Room.

Soane’s use of light is a distinctive and consistent trait of his architecture and interiors. He produced complex, multi-layered effects with light and shade by innovatively deploying forms and structure to marshal the play of light. Creatively implementing devices, still in use today, such as top-lighting, strategically aligned mirrored surfaces and vistas, along with coloured glass to transform the experience of the spaces he designed.

Soane’s spatial techniques were instrumental and one of the contextual sources of inspiration for our use of mirrors with the guestrooms at Club Quarters Lincoln’s Inn Fields hotel. 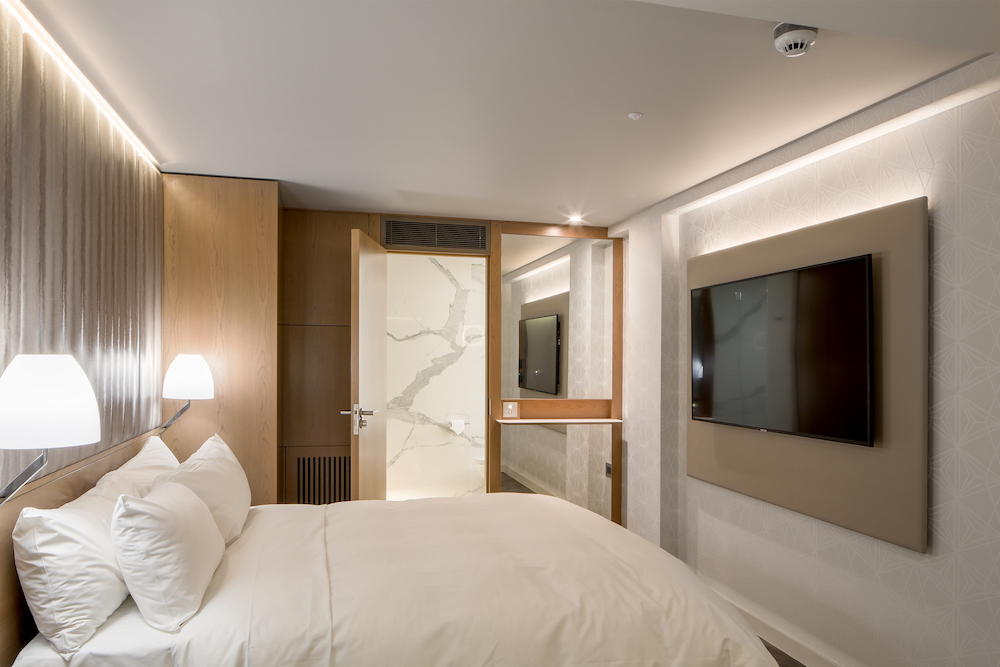 Lebbeus Woods’ notes on “Measuring Light” (April 30, 2012) are apposite when considering our relationship and engagement with the reflected self. As with Sir John Soane, it is the handling of light that is important. “Light is a natural phenomenon the complexity of which reveals the structure of human consciousness. Objects, including building, in their absorption and reflection of light stimulate a human’s neural networks, in effect activating the brain. The more complex and nuanced the stimulation the more the brain comes to life. Shape, edge, texture, colour, shadow, highlight – play with and against one another – effectively enable the brain to make the most subtle distinctions, thereby imbuing human experiences with a richness and complexity that defines it… the perception of light is central.”

The mirror can therefore be viewed as an instrument that reveals the presence of light and therefore giving it a precise measure and place in our conception of interior space. As designers for Zoffini we have taken to heart Woods’ sensibilities of light and aligned it with Anthemius’ articulated mirror instrument to create our own variant of a “Shift Mirror”. Breaking the reflected surface, to redirect light, and to offer an altered sense of perspective.

In conclusion, it is not at all surprising that we have come to appreciate the mirrored surface as such a wonderful and adaptive material in the world of design. The mirror is an oddly passive, introspective, intrusive, and energetic surface. Not just because it reflects the environments and people around it, but because by the very nature of its reflective quality transforms the way we see the world that surrounds us.

Though we may have rationally put away all mystical metaphors, mirrors will remain analogous with the stuff of magic and imagination – from mirrors on walls used by manipulative stepmothers to joining Alice with her Looking Glass portal to step through into a different world.

MAAPS Design and Architecture is one of the brands that has taken advantage of our Industry Support Package. To keep up to date with supplier news, click here.