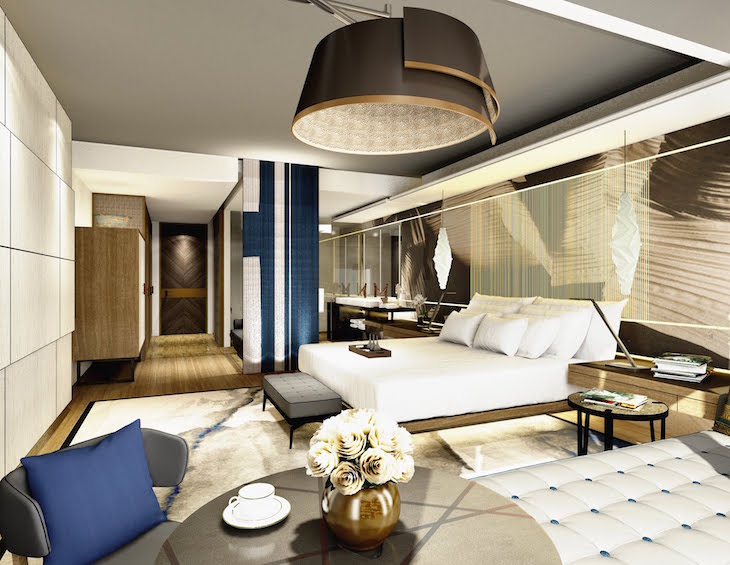 Legendary designer Jean-Michel Gathy infused a contemporary and traditional aesthetic in Four Seasons Hotel Tokyo at Otemachi, which is sheltered inside the city’s latest landmark building…

Soaring above Tokyo with panoramic views of the Imperial Palace, Four Seasons Hotel Tokyo at Otemachi is poised to reach a new height of luxury in its design statement with Japanese traditions melded seamlessly with a modern European aesthetic.

The 193-key luxury hotel is the design brainchild of Jean-Michel Gathy, legendary principal designer at the award-winning hospitality and design consultancy firm Denniston.

On the top six floors of the new 39-storey tower plus two additional floors (Ground Floor and 3rd Floor) adjacent to the Imperial Palace–the capital’s literal and figurative heart, Four Seasons Hotel Tokyo at Otemachi will be a restful haven for travellers delivering a new level of luxury experiences at the city’s latest sky-high social scene. The hotel will feature 193 well-appointed guestrooms and suites, a prestigious spa sanctuary and a 20-metre pool on the highest floor as well as four distinct F&B concepts.

“The cultural diversity of the country has drawn me to create a contemporary expression of the traditional values for this project.” – Jean-Michel Gathy 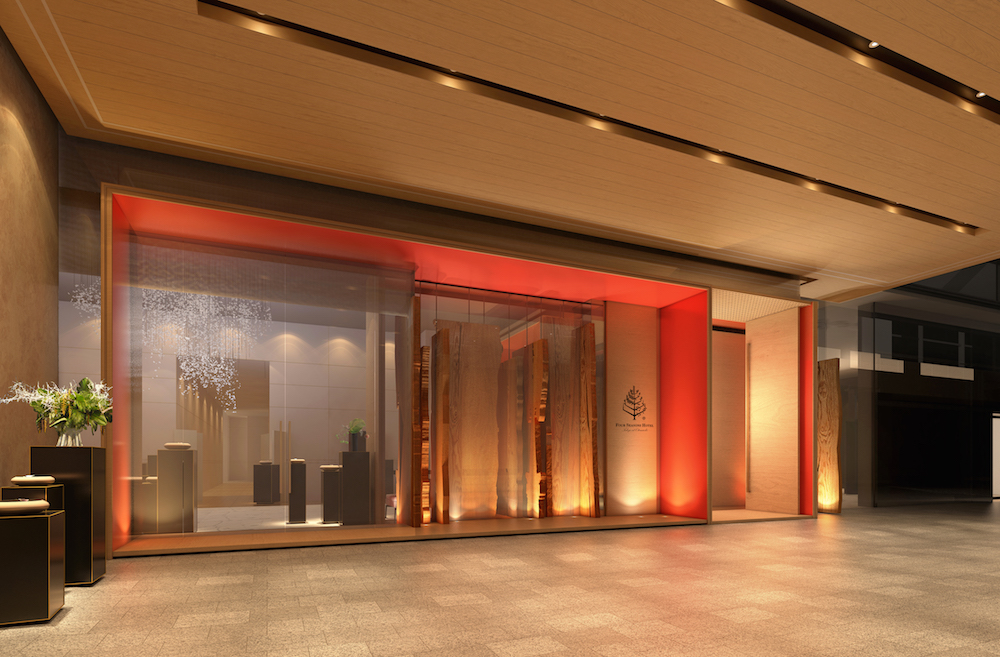 Gathy skillfully presents authentic Japanese elements throughout the design in respecting Japan’s culture, traditions and heritage, while incorporating the finest elements and absolute DNA of Four Seasons. “The cultural diversity of the country has drawn me to create a contemporary expression of the traditional values for this project without arrogance or a sense of overbearing,” the designer commented. We aim to ignite the feeling of a home away from home with an inviting, warm and welcoming atmosphere in the most dynamic city.”

Reflecting the vibrancy of Tokyo, a traditional Japanese red-orange lacquer box featuring solid timber panels acts as the frame to the hotel entrance at the busiest district of Tokyo. Gathy has created an experience of sensory excitement from which travellers will discover the city’s intriguing blend of ancient and hypermodern.

To replicate the Japanese aesthetic, Gathy has personally curated a defining art collection to celebrate the distinctive craftsmanship and artistry, which embodies the traditional foundations of the country. Distinct examples can be found in the combination of the Japanese floral art Ikebana, hanging natural fibre/fabric artwork and the timber panel featured at the entrance to awaken the overriding strength of connection between east and west.

Board the lift to the reception lobby on the 39th-floor where an extraordinary view is revealed through a glass curtain wall fronted by a rock installation on a shallow pond. “To truly respect the tradition and interpret the tranquility of Japan, the water feature serves as a buffer area to deflect guests’ eyeballs as it may be considered as discourteous to look straight down into the Imperial Palace.” shares Gathy who leads his team to plan scrupulously and strike a balance between the pursuit of aesthetics and the preservation of culture and respect for traditions. The six-metre high ceiling and cosy nooks and crannies provide capacious space for the reception, while the colour theme of gold and black delivers a subtle and warm welcoming atmosphere to Four Seasons Hotel Tokyo at Otemachi. 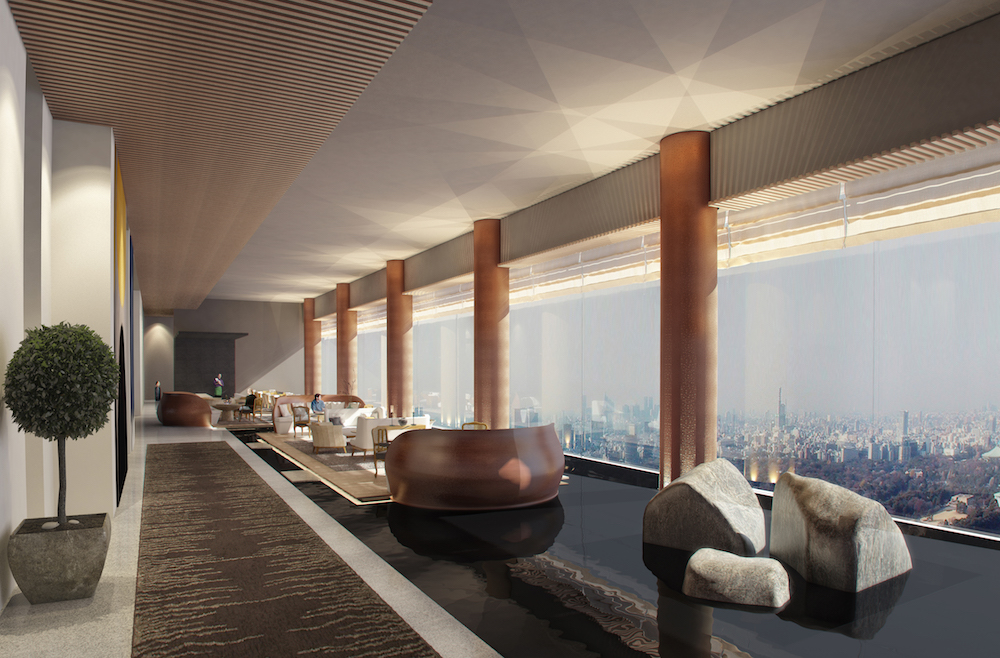 The links between contemporary West and the traditions of Japan have contributed to the reception area where guests can discover the hidden details before experiencing the dynamism of Tokyo. In response to the Four Seasons’ core value of “East meets West”, the Japanese calligraphy with the meaning of “season” is harmoniously blended in a typical European pendant chandelier and ingeniously displayed on the bottom part of the dome. The Japanese Zen garden subtly sculpted and reflected on a 3-dimensional wall by the artist Pongsatat Uaiklan (Dong) sits behind an elegant Italian cat-leg cabinet decorated with Japanese blocks.

Distinct Japanese touches immerse guests in the local landscape, the flowing and multidimensional design can be found throughout the 193 guestrooms at Four Seasons Hotel Tokyo at Otemachi. Blending the art to the room flawlessly, Gathy appointed the Japanese award-winning photographer Namiko Kitaura to capture the bespoke fabric artwork displayed as the backdrop in each guestroom. 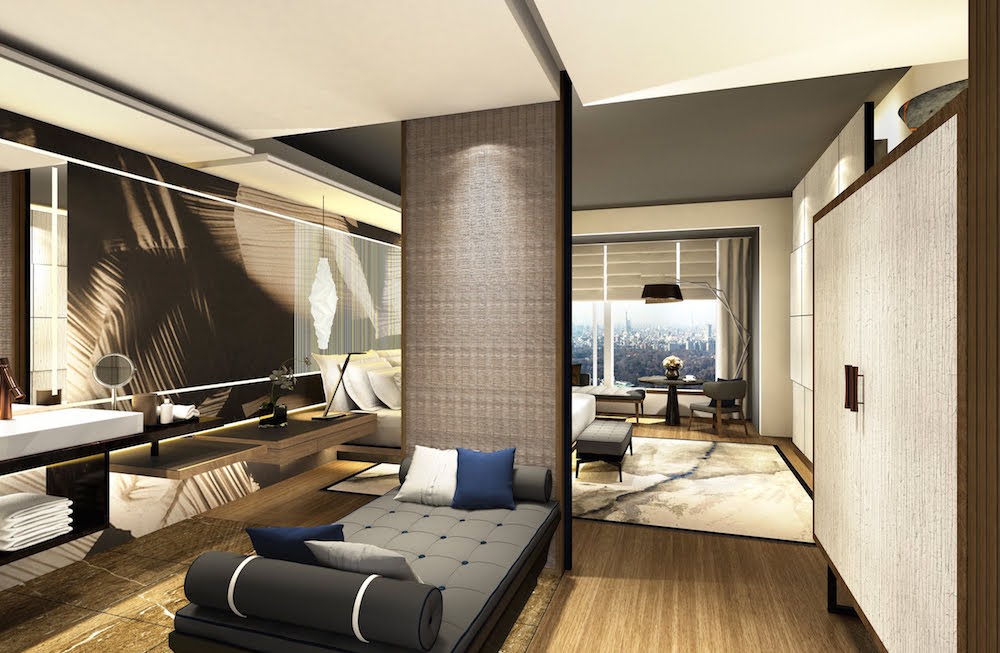 All rooms and suites are tailored for intimacy with an innovative open-plan layout. The sophisticated Japanese aesthetic flows through the interiors which are illuminated by natural light during the day and with bespoke modern light fixtures to reflect the after-dark glamour of Tokyo. 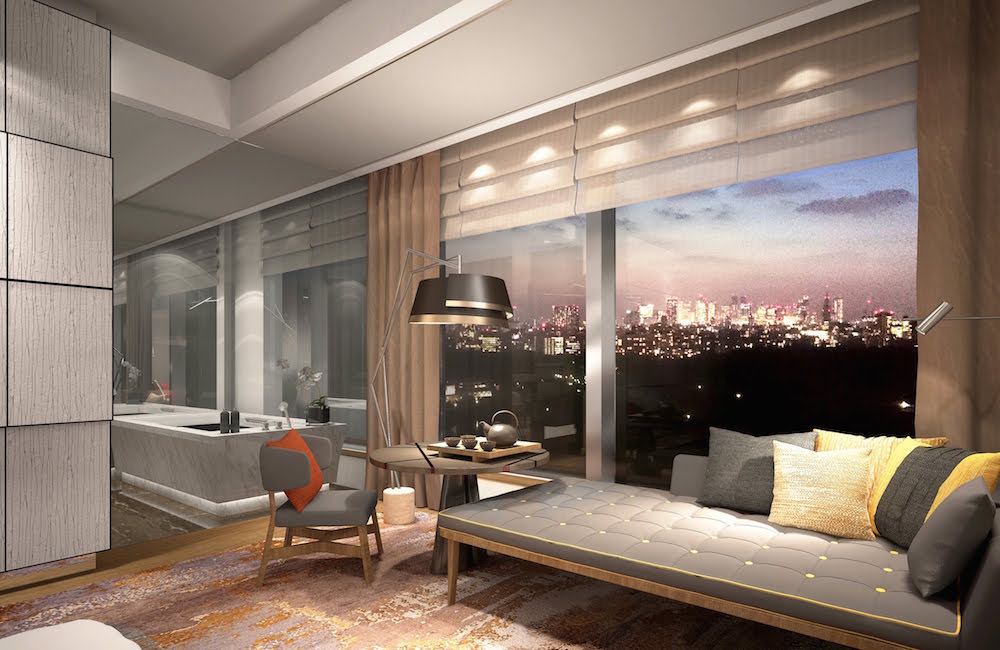 Celebrating an authentic wedding in the heart of Tokyo at Four Seasons Hotel Tokyo at Otemachi, the ballroom and the function rooms adjacent to the chapel promise magical settings for every moment of celebrations.

Natural light and elegant décor at the chapel invoke an ambience of romance and peace with distinctive European touches. Incorporating private rooms for the bride and officiant, and offering seamless connectivity to the Ballroom Foyer, Grand Ballroom and each of the smaller function rooms, the Chapel can host not only the ceremony but all other types of wedding events, from intimate family brunches to gala receptions. 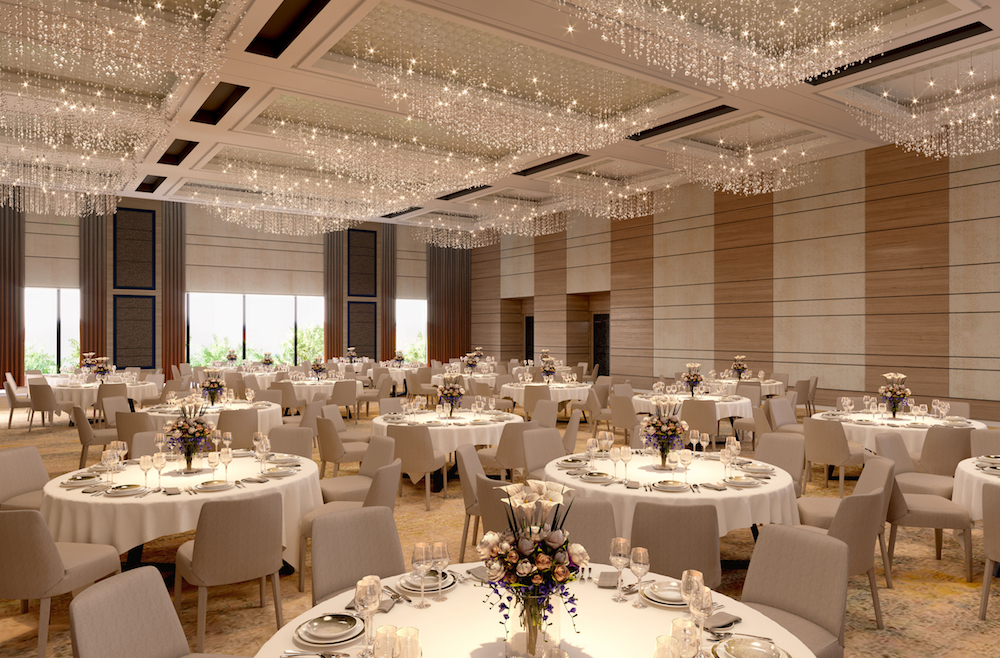 The Grand Ballroom’s windows draw natural light into the spacious interior. The chandeliers and cascading lights without concrete shapes echo the beauty of nature and evoke the contemporary transition of Japanese culture. Gathy shares his vision for the project: “Inspired by the hotel name, Four Seasons, we are trying to reflect the essence of traditional literature and poetry – flow of the Seasons.”

Gathy applies his deft touch to create a serene sanctuary for THE SPA at Four Seasons Hotel Tokyo at Otemachi with the selection of a gentle and relaxing colour tone. The massive 3D natural fibre or fabric art installations in the spa lobby and pool area billow and sweep outward as if caught in a gust of wind, which offer a sanctuary of tranquility amidst bustling Tokyo for a journey of rejuvenation, relaxation and the pursuit of wellbeing. 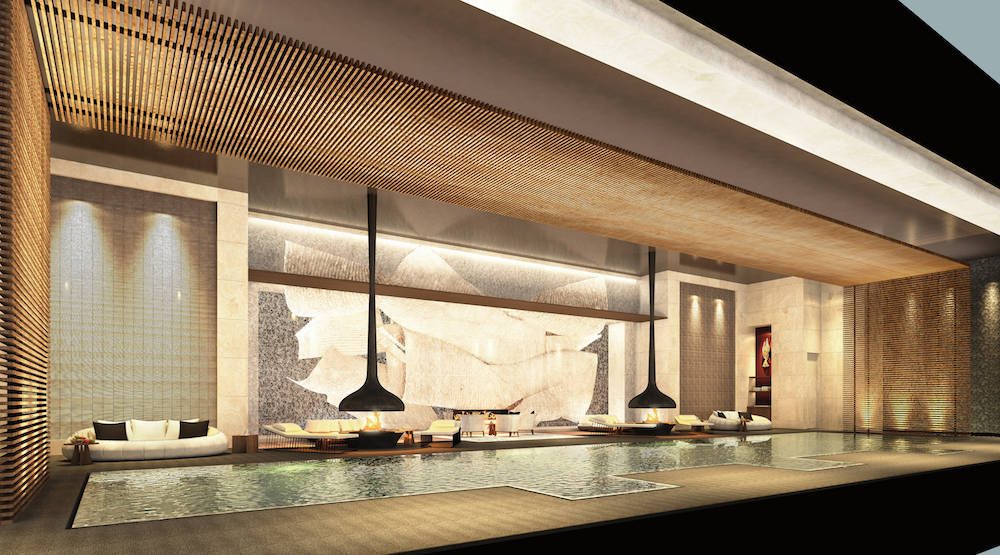 Gathy proudly leads his team to interpret the luxury brand DNA of Four Seasons with great respect to the culture and tradition of the country while celebrating the cutting-edge creativity and contemporary design ethos of Tokyo as a dynamic city. Gathy continues his innovative design inspiration which draws upon aspects of the country’s rich culture to the brand and his previous completion – Four Seasons Hotel Bangkok at Chao Phraya River will also open on October 1 2020.