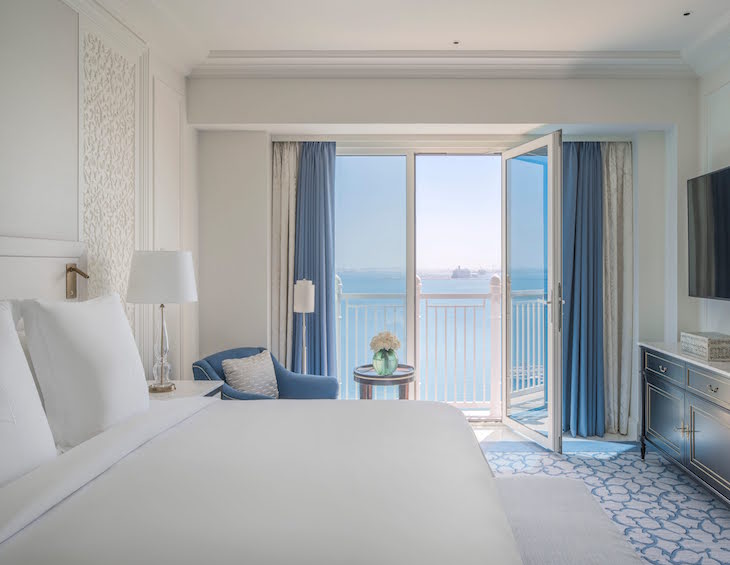 The new urban sanctuary, Four Seasons Doha, was created by the world-renowned interior designer Pierre-Yves Rochon, who took inspiration from the sky, sea, sand and earth…

Following extensive renovations of the guestrooms, suites, floors, lobby and dining outlets, the hotel has been reshaped into an unmatched luxury destination at the heart of Qatar’s capital city.

Within what is being described as an ‘urban sanctuary’, a refreshed colour scheme, including a rich spectrum of blues and beige in the guestrooms, evoke the earth, sprawling skies and Gulf views of Doha, while verdant colours and patterns in the new Tea Lounge pay homage to the splendours of nature. The redesign continues to establish an elevated sense of place and time through a blend of classical and contemporary elements, and touches of Middle Eastern influences from the region, visible through the opulent and colourful chandeliers as well as the ornate furniture detailing. Qatari artwork from the owner’s original collection has been kept on the hotel walls whilst nearly all the curtains have been revamped using a Damask pattern.

“I wanted to bring a new dimension of modernity to the property and enhance the guest experience with uplifting design elements and spaces.” – Interior designer, Pierre-Yves Rochon.

The lobby and dining outlets: The beauty of nature

The renovation of the hotel strikes a harmony between the world of man and the beauty of nature that is reflective of the city itself. Rochon was inspired by the unique landscape of Doha and this is evident through the colour scheme of the hotel’s public areas and dining outlets. The feeling of the outdoors blends into the interiors with the creation of open-plan space and expansive glass windows. 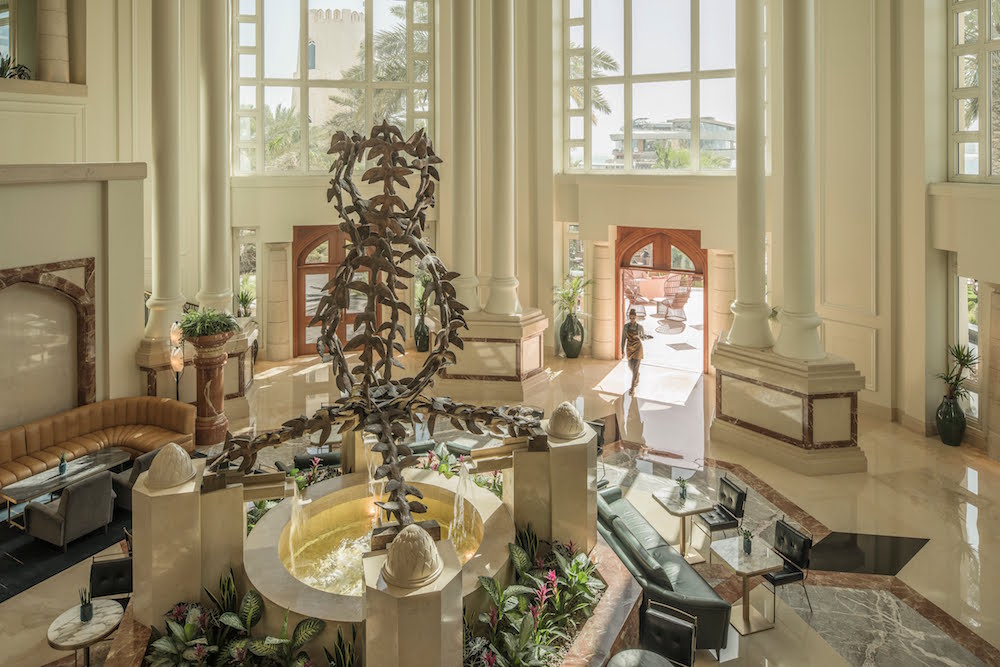 “We were inspired by Doha and its relationship with the outdoors,” commented Rochon. “We researched the local culture and the artistic elements that might tie into the story of the hotel. I wanted to bring a new dimension of modernity to the property and enhance the guest experience with uplifting design elements and spaces.” Rochon also noted that throughout the design process, they sought to respect and honour the existing classical architecture by Frank Nicholson, blending classical and modern forms. Careful consideration was also taken to create a more residential feeling, while also paying homage to Middle Eastern influences.

The lobby has been enhanced with a grandiose door reminiscent of grande dame entrances, and the lobby has been redesigned as an open-plan space, allowing light to flood through the foyer as well as boasting views of the Arabian Gulf. A hand blown glass chandelier, alongside an array of handmade and bespoke Italian furnishings, adorns the Lobby’s ceiling whilst also creating a magnificent focal point in the space.

The new outdoor terrace at the Seasons Tea Lounge bridges the indoors and outdoors and allows guests to enjoy varying atmospheres with distinct personalities. The designer sought to create spaces where individuals or small groups could congregate, with the lounge exuding the classical touches of a Parisian cafe and the al fresco spaces adorned in a spectrum of green sheaths. Subtle nods to the Middle East are dispersed throughout the lounge, seen in the marbled floor inspired by Islamic mosaic tile-work, which lies underneath oriental sofas, silk cushions and cashmere patterned fabrics surrounding openwork tea tables. Individual seating areas were created to accommodate several business or leisure groups at once, each offering an intimate, residential ambiance.

As well as a complete redesign of the interiors, the hotel introduces the expansion, as well as the redevelopment, of its diverse dining and lounge concepts. Arabica, located on the ground floor, returns with a  contemporary new look and coffee and dessert bar. Neutral and calming in its colour scheme, the space houses marble furniture that echoes the octagonal shape of the conservatory.

As a dynamic cultural destination with a thriving cosmopolitan district, Doha has direct access to a beach and beautiful blue sea. The redesigned rooms follow a soothing spectrum of blues and beiges reflecting the colours of the sky, sea, sand and earth. Rochon aimed to evoke a feeling of timelessness whilst also creating an atmosphere in the rooms that is welcoming, uplifting, peaceful and comfortable for guests, with a powerful sense of place. 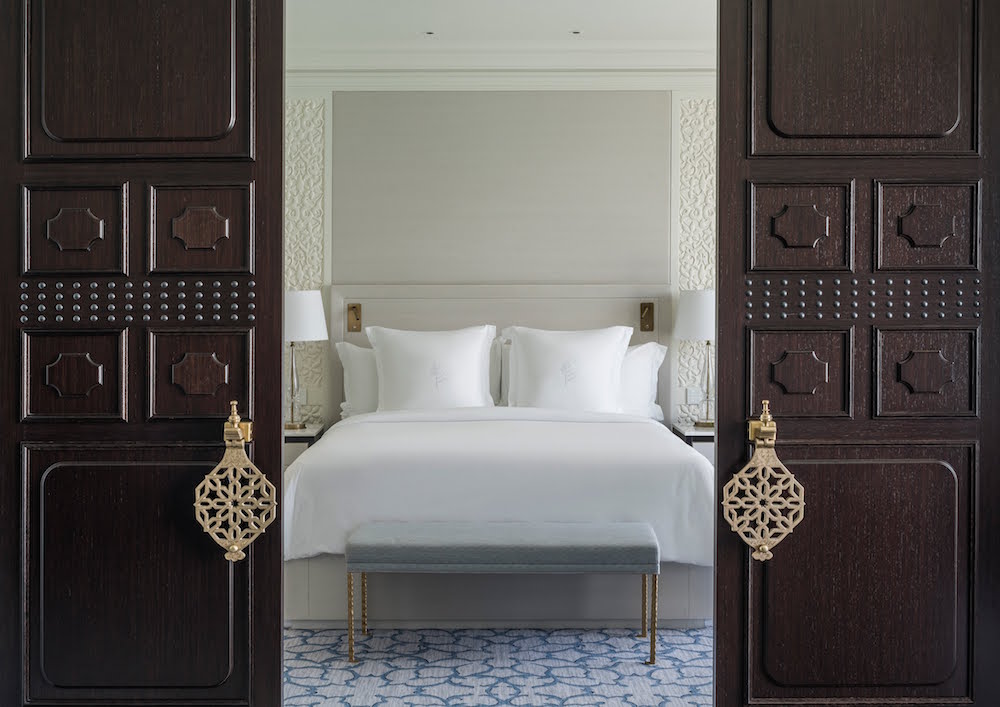 All the rooms and suites are furnished with discreetly integrated and energy efficient technologies to enhance the guest experience and bring a new dimension of modernity to the hotel. All accommodations now feature automated curtains and lighting systems as well as temperature management preservation technology within the newly installed windows. 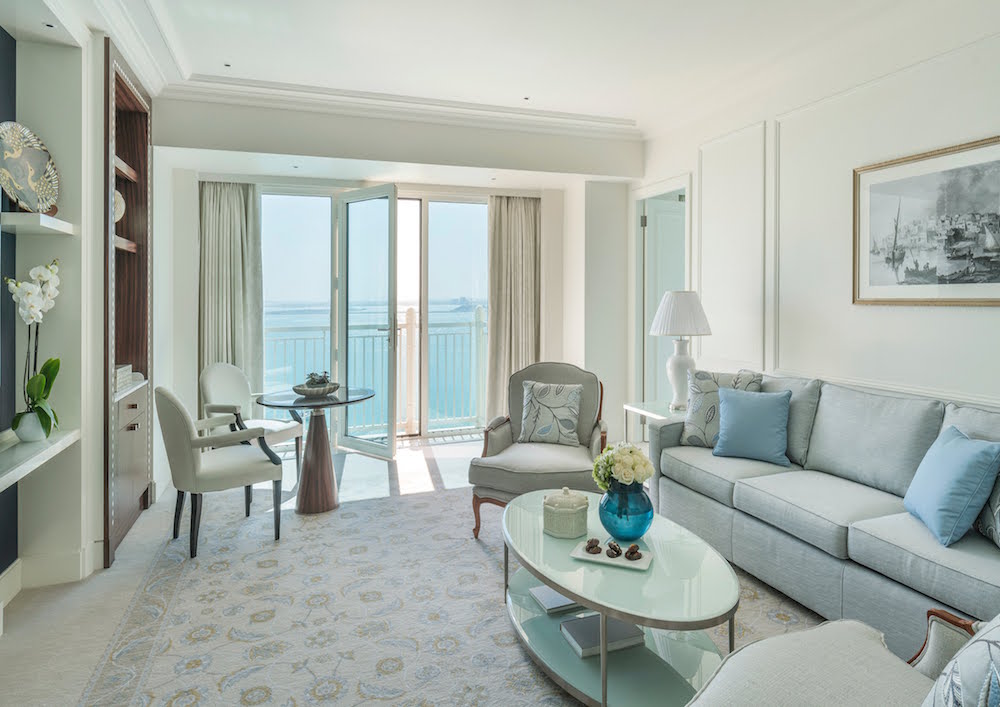 Image caption: The guestrooms and suites have been inspired by sky, sea and sand | Image credit: Four Seasons Hotels & Resorts

Meanwhile, the suites offer Hermès amenities and continue to pay homage to Qatari heritage with mother of pearl inserts in the bookcases and bathrooms, decorative plates in the libraries, headboards with relief geometric patterns and doors with oriental touches of worked wood and brass hardware, all whilst complementing a contemporary rejuvenation. 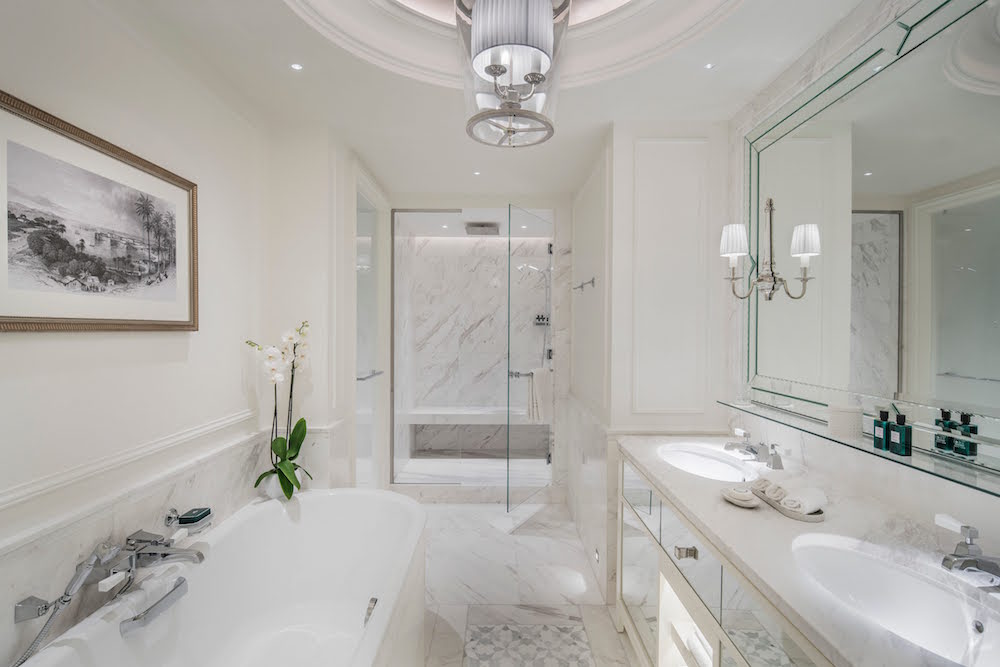 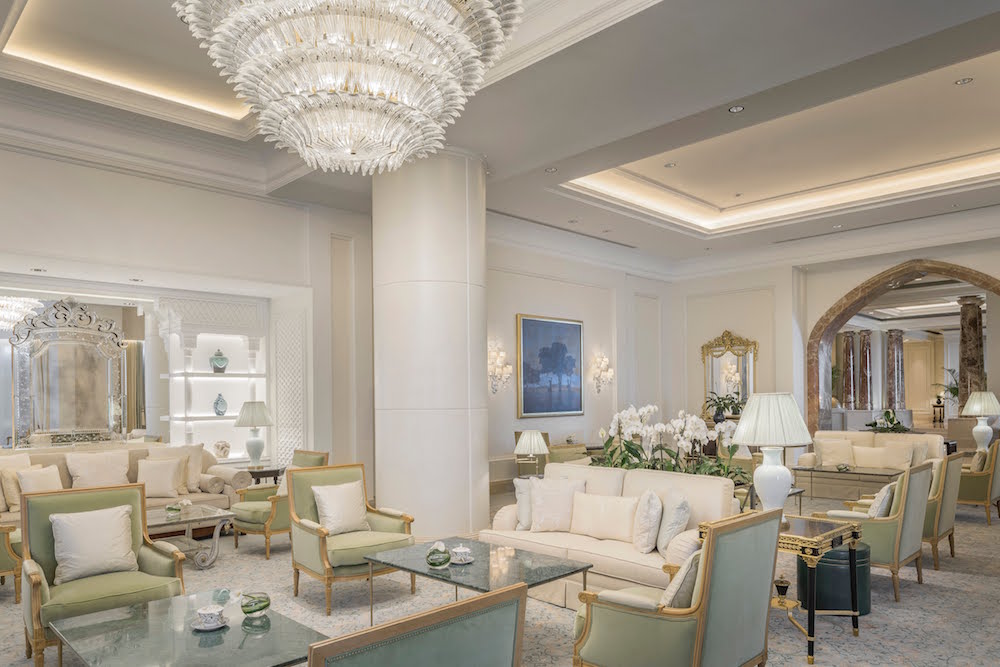 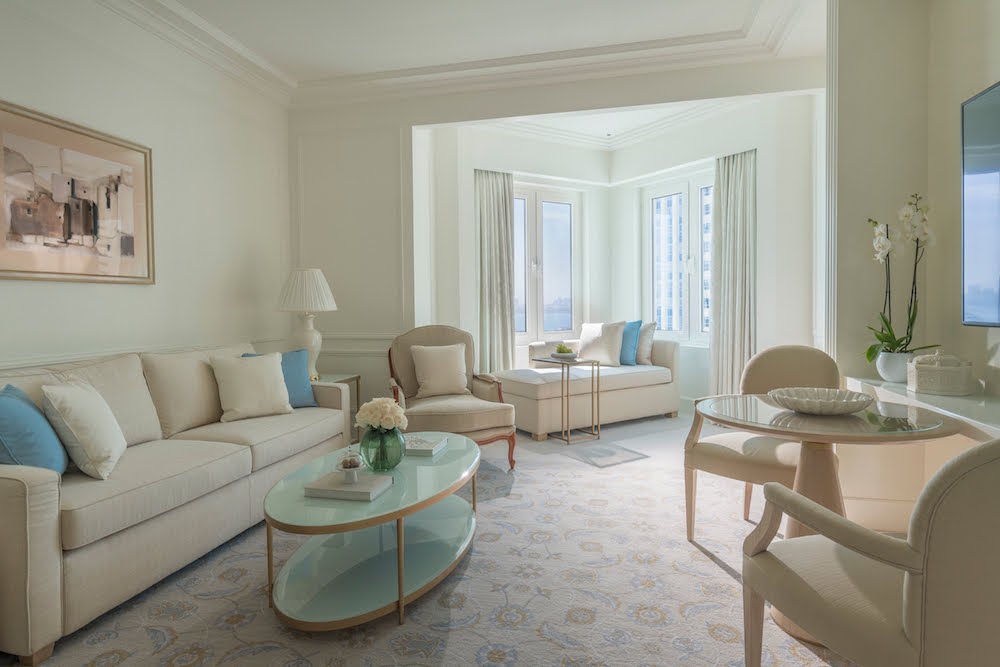 Since its opening in 2005, Four Seasons Hotel Doha has remained an architectural icon in Doha’s skyline. The 237-key neo-classical building is located on Doha’s waterfront at the heart of the city, and its latest renovation has secured its position as being one of the destination’s finest hotels.