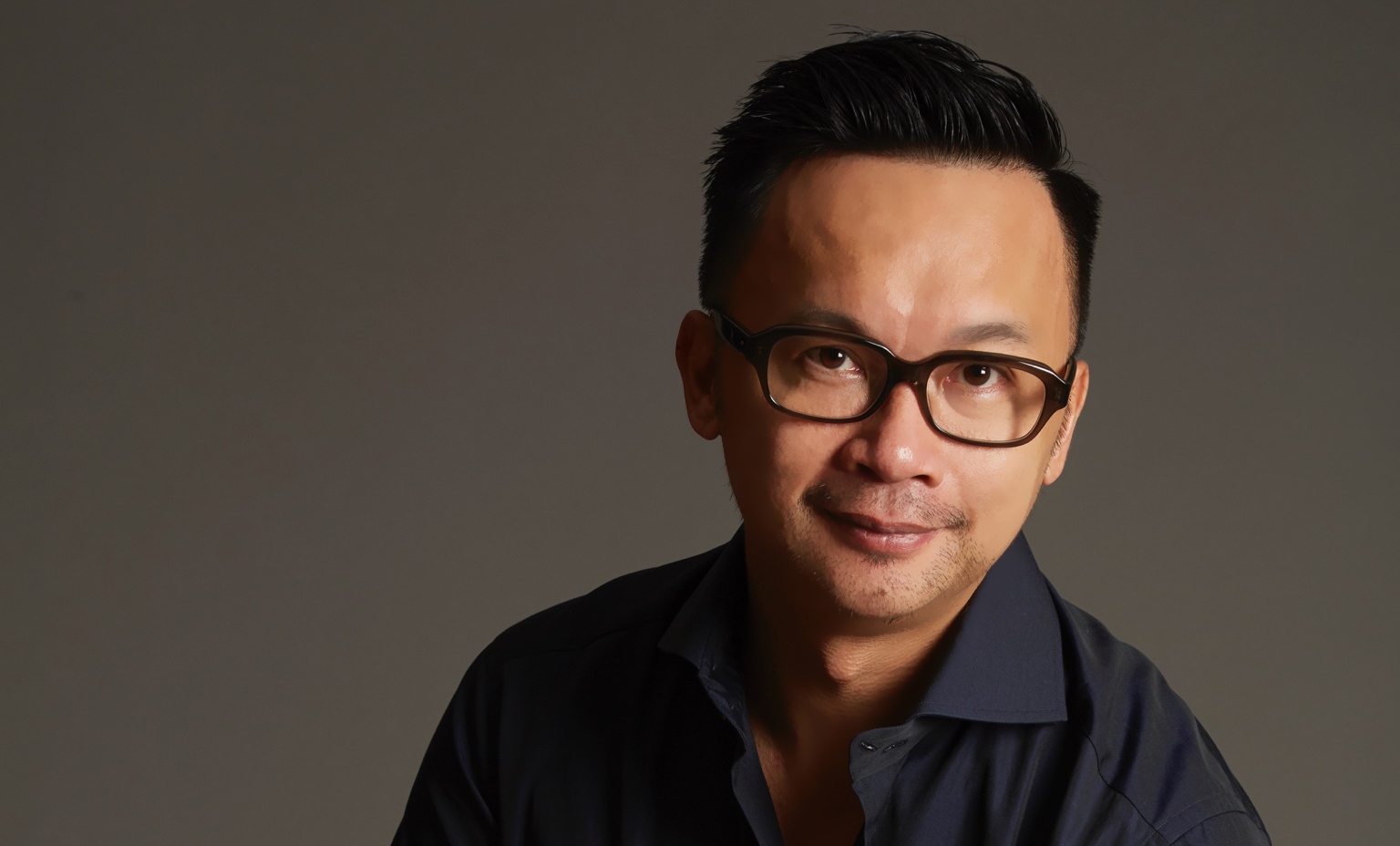 Hotel Designs caught up with co-founder of luxury design powerhouse AB Concept to discuss technology, trends and what’s next for AB Concept

Following on from last month’s focus on restaurants, we caught up with co-founder of luxury design powerhouse AB Concept, which has recently completed Mei Ume, an east-meets-west designed restaurant in Four Seasons Ten Trinity Square, London. Editor of Hotel Designs Hamish Kilburn spoke to Ed Ng to find out how technology in hotel and restaurant design is changing, as well as which common pitfalls to avoid when renovating heritage buildings…

Ed Ng: I wouldn’t really say it sets a certain standard nor does it follow any specific set of rules that is something we tend to avoid for all of our designs. Rules are there to be broken anyway! We’d rather have a bespoke approach for each and every project we are taking on. I think Mei Ume is special in a very unique way as it’s a perfect match in concept, location and building. With the setting being the former Port of Authority Building in London – the crossroads where goods were traded between East and West – there was already a rich narrative in place that we further elaborated on with our design. We wanted to fuse the history and sense of place in a way that celebrated both cultures and as a tribute to the history, keeping the British fundamental and seasoning it with a sprinkle of charming oriental charisma. Through the Chinese glass screen with plum blossoms suspended in between the Corinthian columns, we seamlessly bridged the gap between these two very distinct cultures. 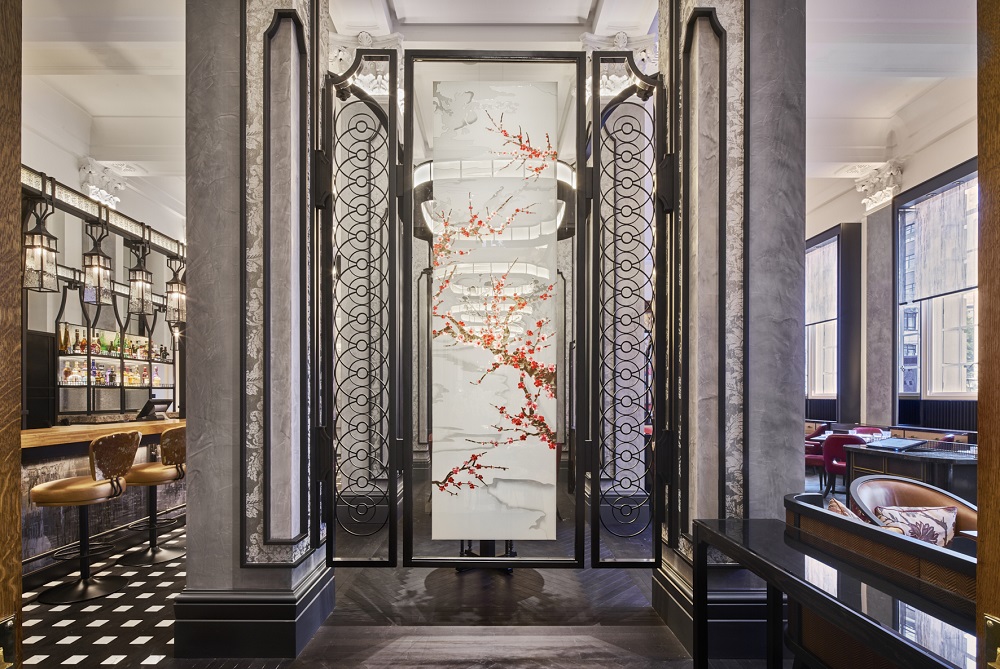 HK: What would you say are the most prominent pitfalls when designing modern interiors in heritage buildings?

EN: Different challenges are to be faced when designing within a heritage building compared to a brand-new concrete shell, as there is already a long trace of history, familiarity and a story in place that is widely recognized. Therefore, such spaces need be treated very carefully and with a lot of respect. However, it’s a very thin line between trying to recreate the past – which easily could turn into an overly “themed” restaurant – and trying to cut too many ties and going for a very invasive approach. That would be missing the point for designing within a heritage building. I often try to play around with the existing elements and use the history as the foundation and then try to introduce contemporary touches to the design. Bringing a unique visual to the space, the design should seem as though it has always been there yet feel very contemporary at the same time.

HK: How have consumer demands changed over the last 10 years – and how has this effected how you design F&B areas in hotels?

EN: The last decade has marked the birth and incredible growth of smartphones, something that has become the platform of a social media phenomenon. The likes of Facebook and Instagram have become the “eyes to the world” and everything that is happening in the new and exciting in the lifestyle sphere is very much influencing where we dine, chill and stay. In the quest for likes, the Instagram moment has become a very important focal point for bars and restaurants, from a design perspective to come up with a visually stunning feature within the space that narrates the story and captures the attention of the guest.

HK: This month, we are talking about all things technology. Is technology for the user in hotels limited to guestrooms?

EN:Absolutely not. I think technology should really be able to weave into the total hospitality experience seamlessly and sometimes, without us even realizing it, we are exposed to technology throughout our whole stay and even prior to it. Starting with visiting the hotel website to making the booking, all the way to arrival, check-in, communal spaces, conference areas and banqueting facilities, dining, space, fitness, check-out and post-stay emails. Sometimes it’s ubiquitous and sometimes it’s subtly working it’s magic behind the scenes but technology is ever present. Having said that, one extremely important criterion is that technology is here to make our life easier, not complicate it for the sake of employing technology. Therefore, the best technology is the one that is hidden yet elevates our experience. 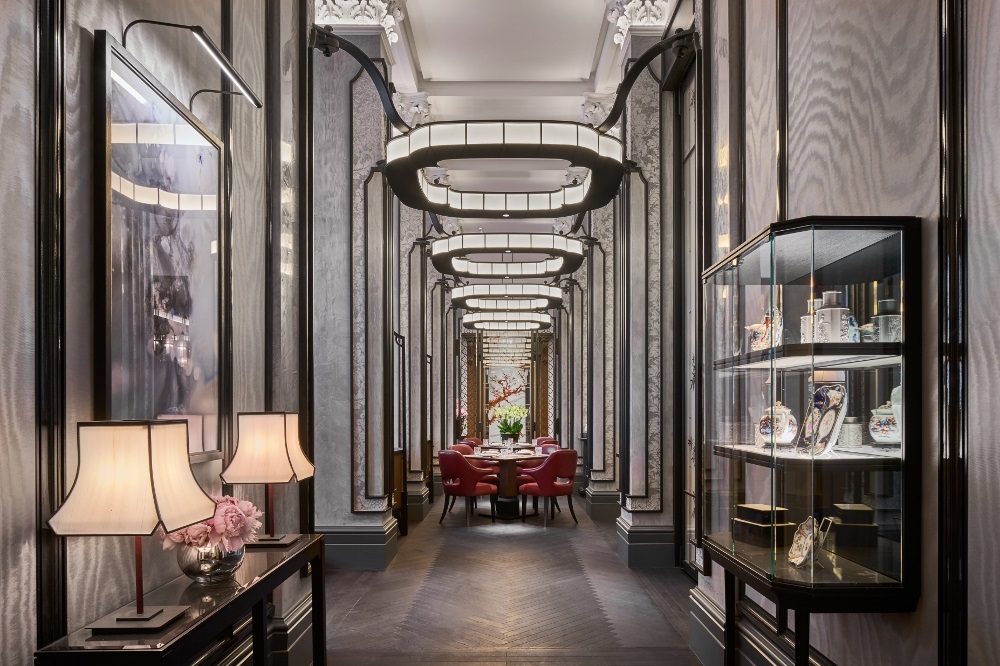 HK: What would you say has been the most rewarding project to have completed?

EN: Every project has it’s own charm and is rewarding in a way, since Terence and I are constantly challenging ourselves to always create an extremely tailored design for each project. We always take a great amount of time to personally experience the project’s numerous aspects such as it’s locating city, culture, history, local materials, and of course, the expectations and requirements of the brand and functionality. We really absorb and condense all these references before we lay our hands on the drawing board. Throughout this process, we’re always able to learn a little more about what we can do and there is nothing more rewarding than seeing another unique piece of work being created. For example, we have just completed Paper Moon Giardino in Milan, the latest flagship restaurant of the brand that is housed within the 200 year old Palazzo Reina where we kept the original feature facade in honour of the history and architectural value, a project that could never be replicated anywhere no matter how much money one spends.

HK: What’s next for AB Concept?

EN: We are very excited to see our project at Four Seasons Kuala Lumpur come to fruition soon. We have been entrusted to design three F&B venues within the stunning property; The Lounge at Four Seasons, Bar Trigona, and Yun House, the latter which derives from the city’s rich cultural heritage, merging and bringing balance between colonial and Asian influences to create a level of luxury and sophistication synonymous with the Four Seasons brand. Meanwhile, we are also working on the W Hotel Xian, where we designed the entire hotel, a very eclectic project that will see The New York party boy come to play with the ancient terracotta warriors in Xian.

HK: If you were designing a hotel from scratch, where would it be in the world?

EN: Honestly, it could be anywhere… as long as it fits the following criteria
1. A supportive owner who understands and respects our design approach
2. There must be chemistry between us and the location (culturally or landscape-wise) 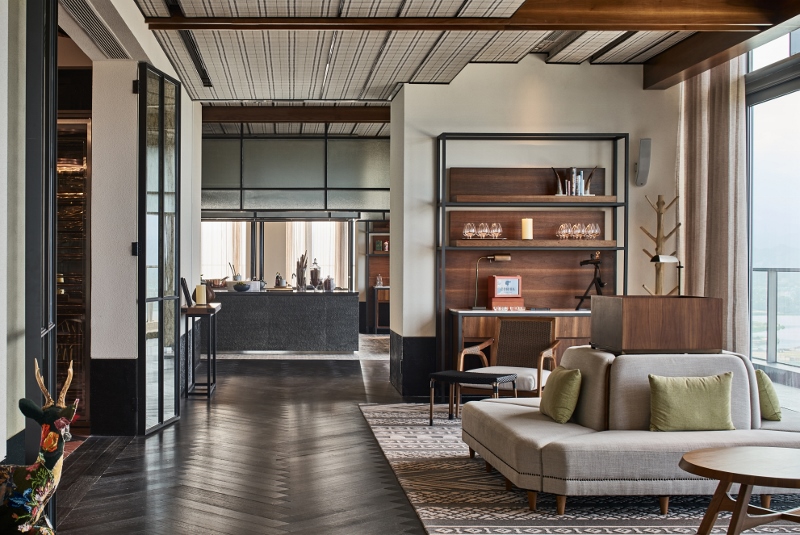 HK: What are your opinions on trends, and are you noticing any dominant ones at the moment?

EN: The only trend we ever follow is: ‘Don’t Look for the Trend’. I can never stress enough how much we try to stay away from designing spaces by trends and how impossible it is to do so. We could be designing a hotel by following a certain trend but as hotels can have a 2 to 8 years time span before the doors finally open, by that time, it will probably have been replaced by 2 or 3 other trends. The design-by-trend would look dated even before the hotel is in operation. As a design studio, fortunate enough to be working with a variety of brands from Four Seasons to W Hotels, we have a deep understanding of their DNA, which is always firmly rooted, slightly adapting throughout the years but never ever follows trends. It keeps a brand consistent. For Rosewood we are now working on developing their new lifestyle brand called KHOS that is aimed at younger, vibrant and cosmopolitan travellers. All these brands are very distinct from each other, creating their own design language, uniqueness and elements that appeal to different guests.