He has been dubbed the ‘Lady Gaga’ of design – a moniker I’m not entirely convinced Marcel Wanders fully appreciates – and has been a big name in the industry for more than two decades; his ‘big break’ coming via the ‘Knotted Chair’ in the late 1990s.

But from his Powerhouse studio in Amsterdam with the help of his team of designers, Marcel has realised hundreds of projects – including some notable ones in the hospitality sector. One of the most recently completed is the IBEROSTAR Grand Hotel Portals Nous in Mallorca, and about which Hotel Designs caught up with the charismatic and accomplished artist for a short chat…

As I call Marcel, he is relaxing with a cappuccino having just spent a week in Mallorca – the home of his latest hospitality project with IBEROSTAR. After our short introductions and a brief aside about the Mondrian Doha – another of his recent mammoth undertakings – I ask him how he got involved in the Grand Portals Nous. He tells me he is ‘super-excited’ about the project and how much it is going to impact the region’s hospitality scene.

He is not wrong. The property sits atop a stunning beach and Marcel has used this luxurious setting to bring about a truly Mallorquin style through his use of transparencies, whites and reflective surfaces. From the lobby’s bouquet motif to the boundless luxury of the hotel’s 66 rooms, four penthouse suites and five themed suites, guests are truly in for a treat.

“We’ve been working on this project for a long time, it has taken a while to complete this project and the whole building process. We’ve worked for eight years with the developer to create this wonderful place that it has become. It really is a jewel in the crown of the Iberian Peninsula. It has been great to be part of it,” he tells me. 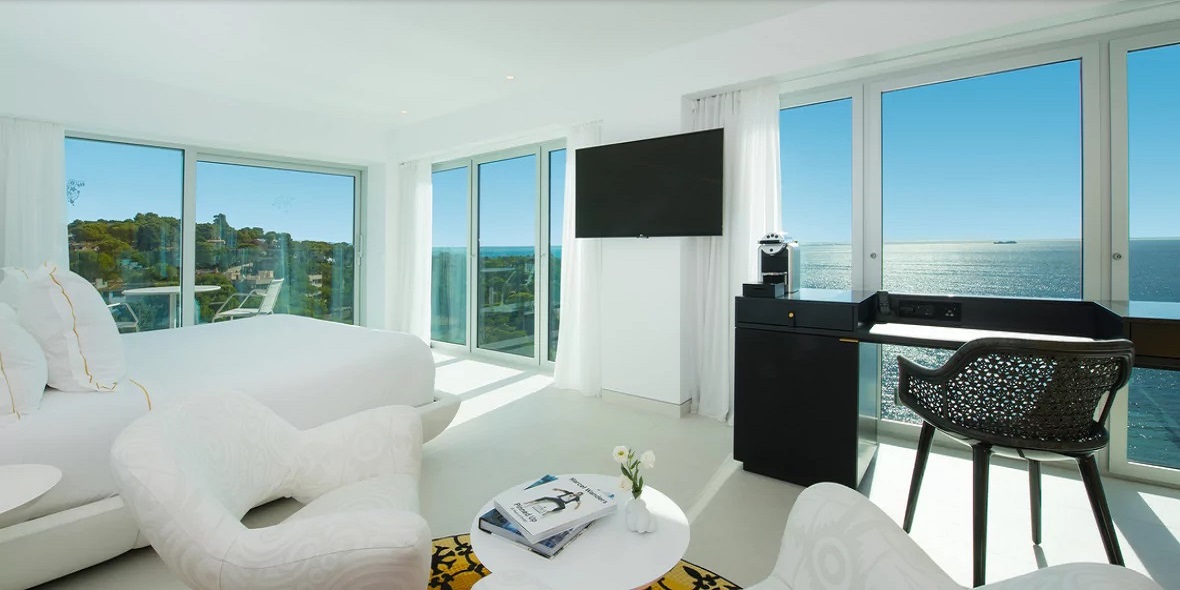 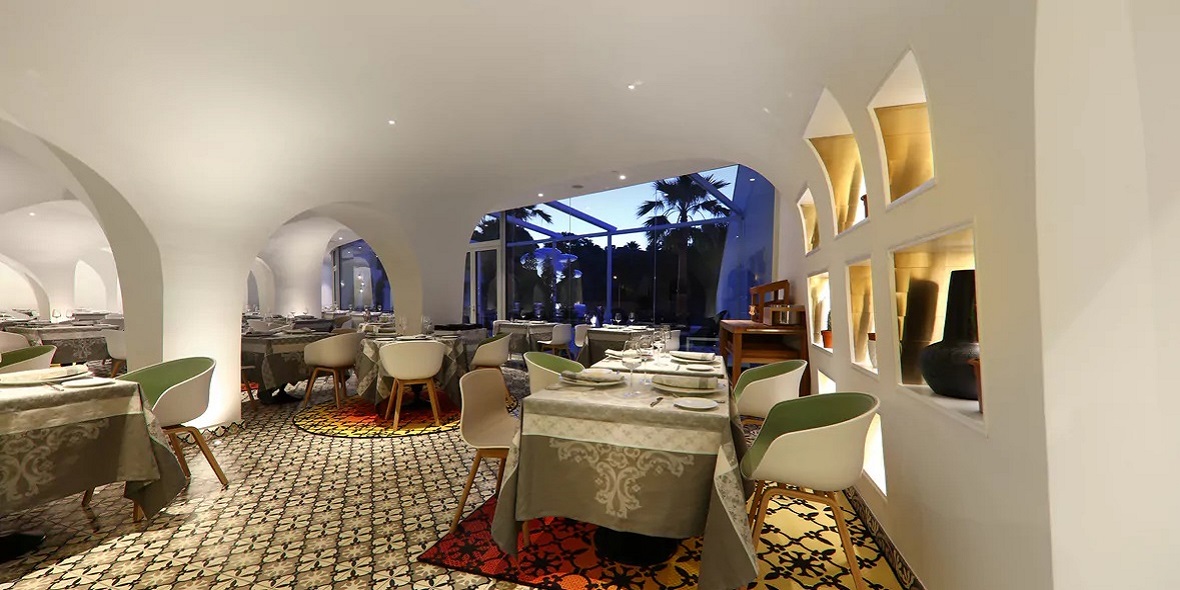 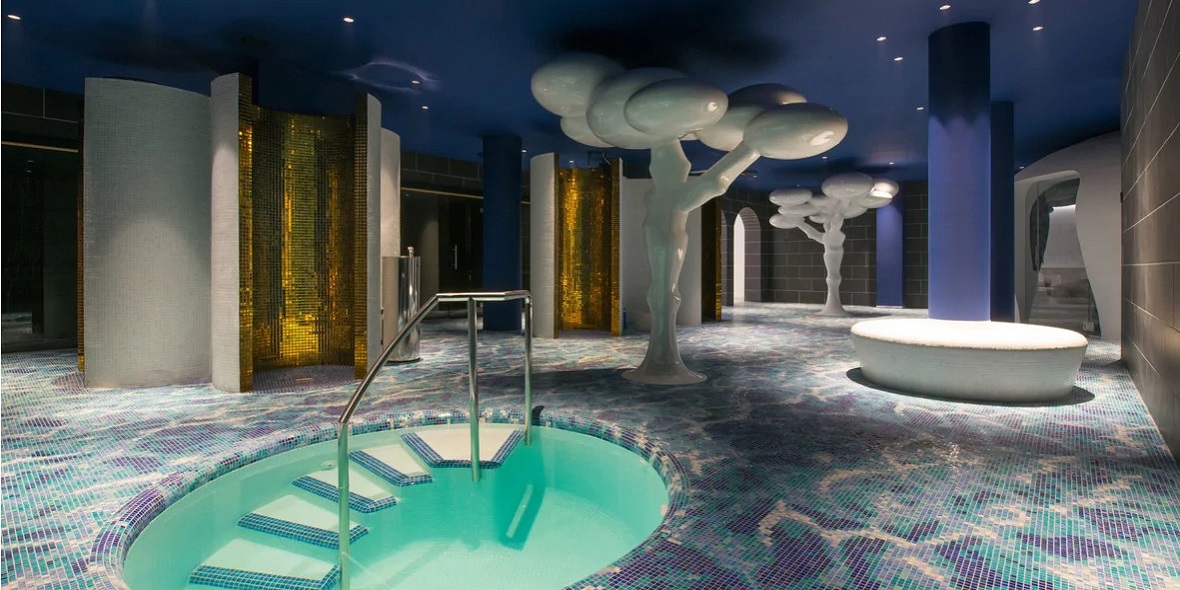 Mallorca is a place close to Marcel’s heart. He clearly adores the place, having completed a similarly spectacular residential project on the island in 2009. I ask him what his inspiration was for this hospitality project.

“As a guest, you want to feel that you are in Mallorca – this beautiful Spanish island. The scenery and views are amazing. So, it was really important for me to make something authentic, that felt like it belonged there in that locale. That can be a difficult thing to achieve – but we wanted to do it in a new way, we didn’t want to do something that had been done before, it needed to be contemporary, modern yet at the same time international. 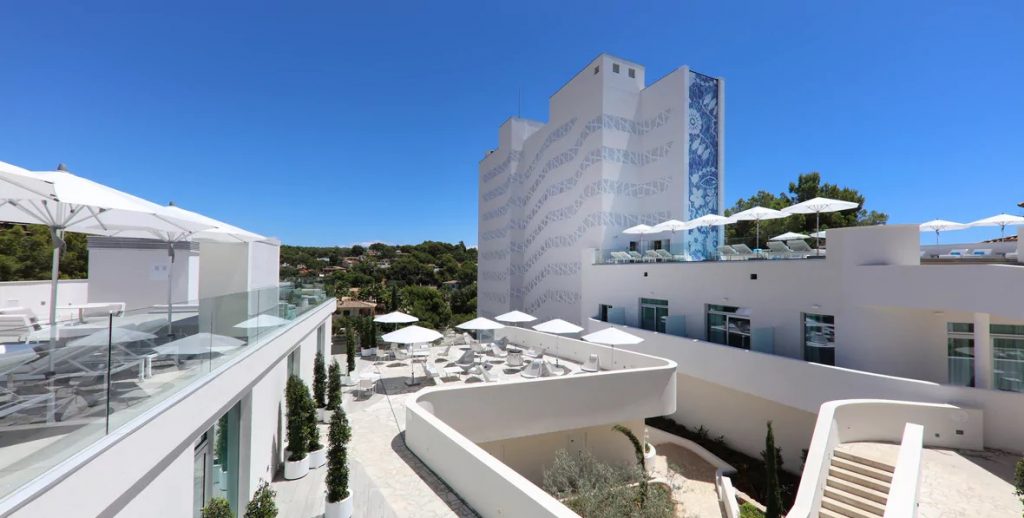 “It was a challenge to create something ‘of that place’ and authentic, that also delivers that unique Mallorquin character. We spent a lot of time sourcing materials, finishes and architectural features specific to the island – not to mention we had colour palettes that are really special; there is a winter and a summer palette. So the inspiration was definitely from the surrounding area. Guests go there to relax and hang out, but they also want to be excited about the place. For me, all of this was critical when it came to designing the space,” he adds.

Marcel’s attention to detail even went as deep as the design of the hotel’s logo. “Part of that ‘local inspiration’ process was creating a logo – its design inspiration was local flowers found on Mallorca, which bloom in early spring and herald the start of the season and I’m really happy that the bouquet logo celebrates that fact.” 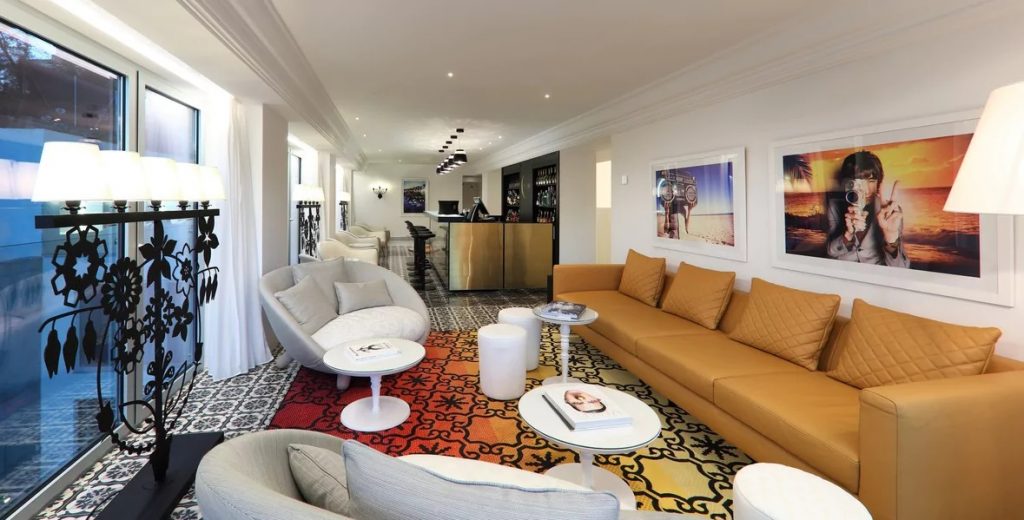 Marcel’s work has been carried out around the world on various sectors, so what is it that interests him about designing for hotels? “I have to say that in all things that the team does, we like to do projects where the design is ‘major league’. By that I mean projects where the design is integral to the success of the project. Of course, that comes into every project to an extent, but often people go somewhere because they have to go there. We want to create spaces that people visit because they really want to go there,” he says. 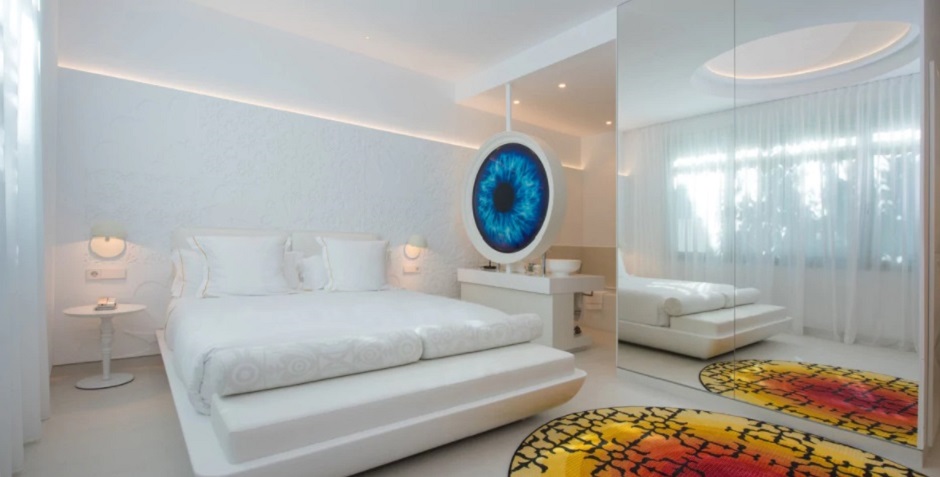 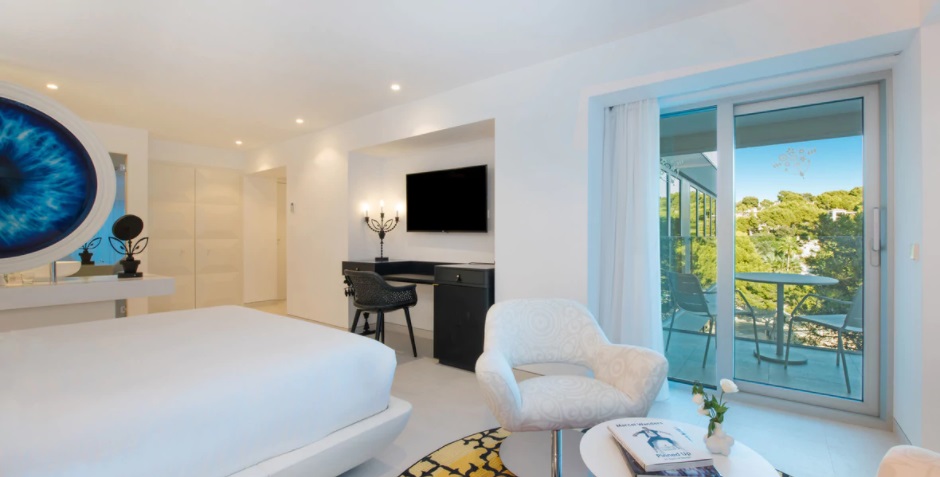 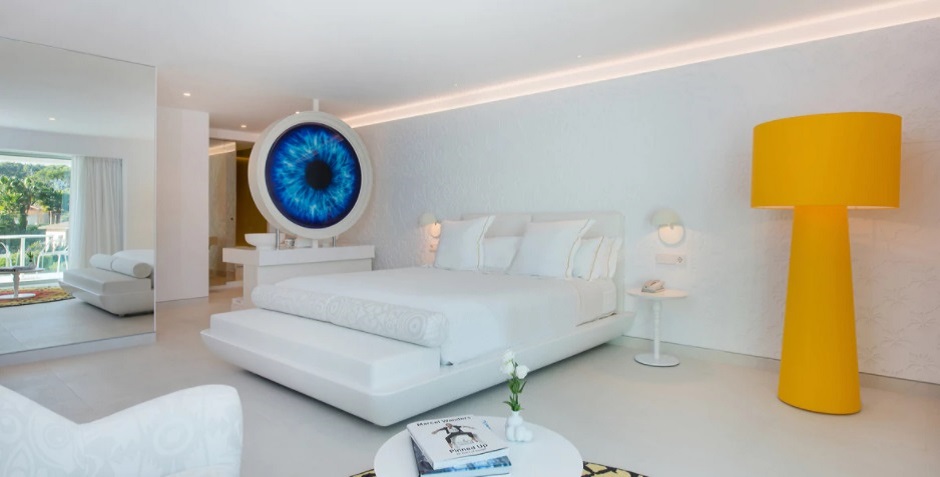 I ask Marcel how it differs from other sectors he has worked in and he enthusiastically tells me why he finds hotels ‘amazing’ to work in. “You get the freedom to really go hard with the design – unlike in a private residence where you might have to quieten that creative streak, create something a little more subdued and which ultimately is less visible to the world. Hotels are definitely our ‘sweet spot’ so to speak, a chance to show off creativity. 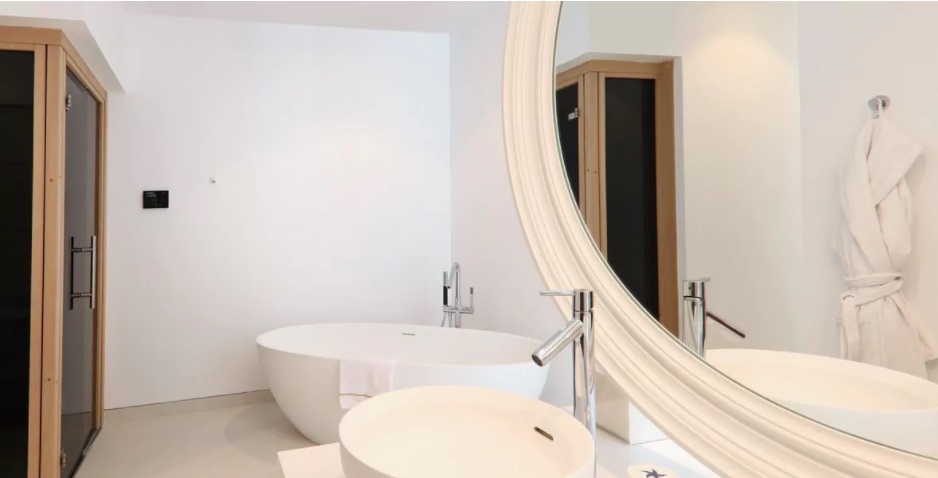 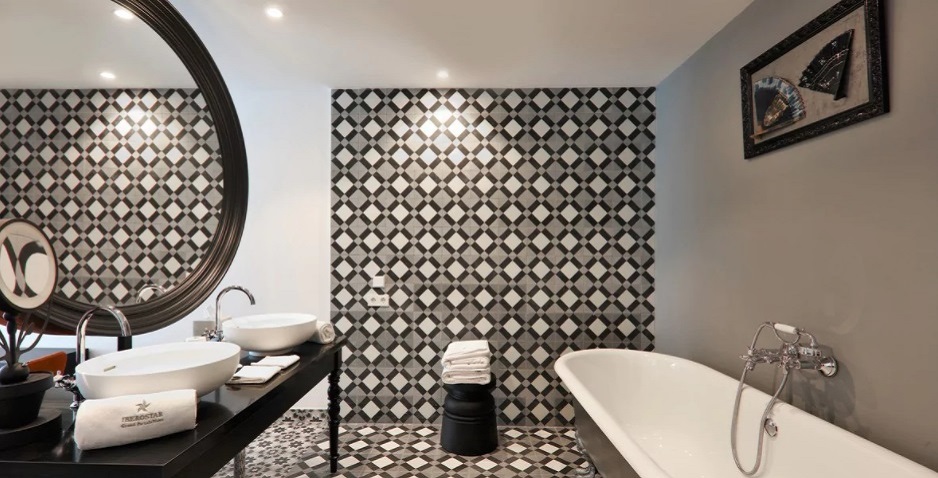 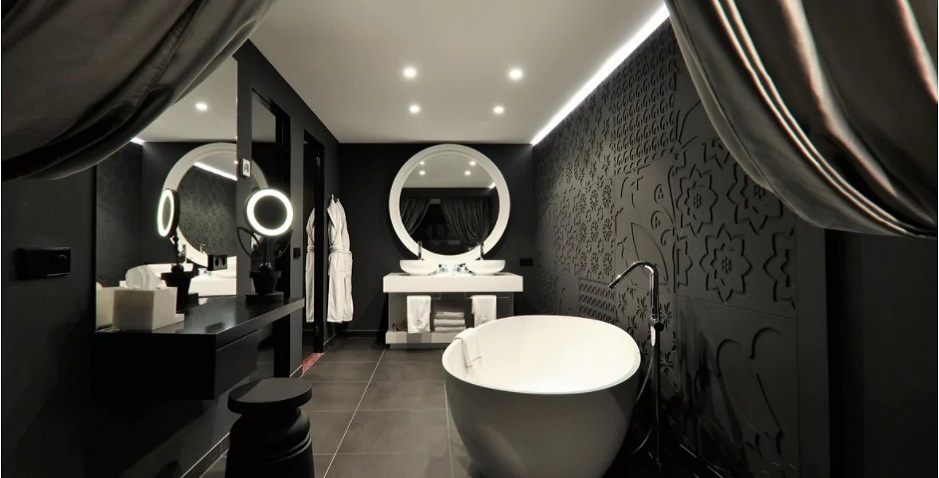 Marcel then talks about his early years as a designer and how that mass appeal is part of the appeal. “Starting out in my career as a designer, if we take the example of designing a coffee cup – you work for a long while to make that cup look wonderful and special, and then thousands of people can enjoy it, that’s important to me. It’s nice if one person is really happy with something you’ve created but it’s amazing when you create something of value for a lot of people – and hotels are exactly that.” 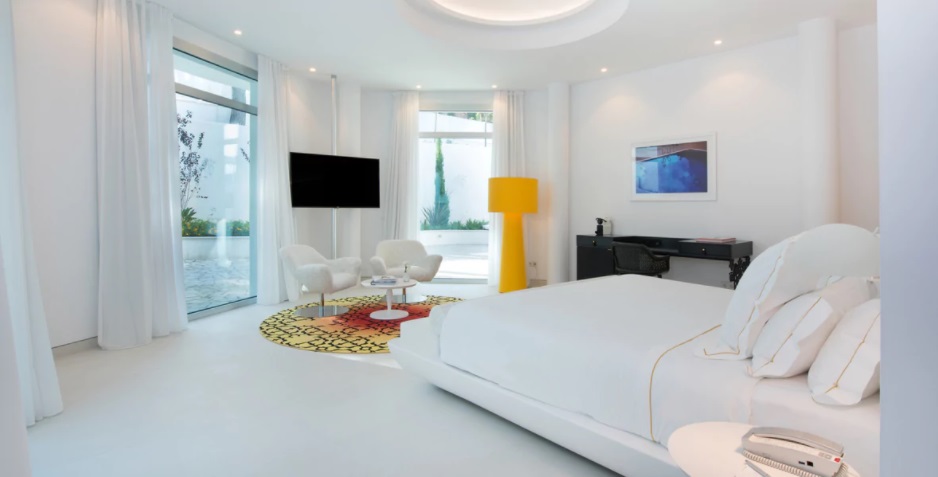 With his huge, worldwide reputation for creating statement, high-end interiors Marcel could be forgiven for running away with his vision, but that attitude has never been part of his make-up.

“I think hotels are actually very democratic. With this project – sure, it’s a five-star hotel and if someone wants to stay there for a week, they have to take quite a bit of money. But a person can also enjoy that space by just having a coffee or a drink with friends – I think that’s really cool. 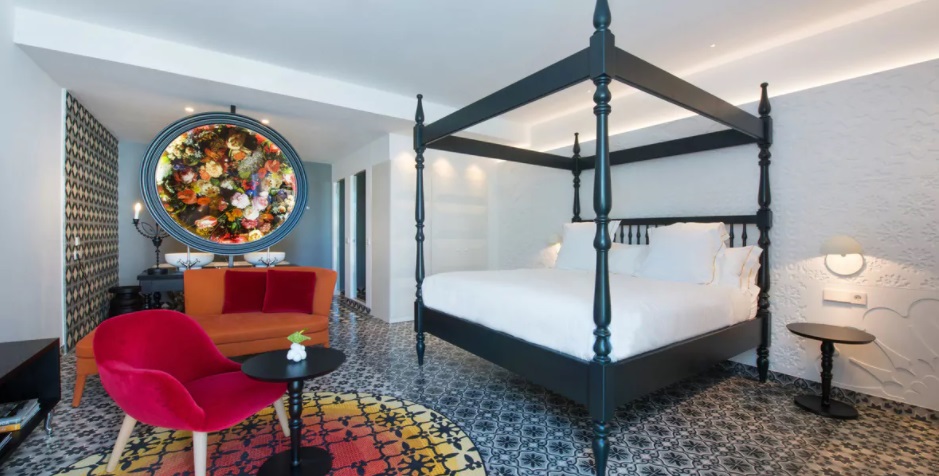 “I remember when I was a kid, I would see spaces and think that’s a great space – like an expensive shop for example, you walk in with only a hundred bucks for the month and everything on sale is five hundred bucks. You’re priced out. But there has never been a hotel I felt I couldn’t go in, because I thought to myself I can always order a cappuccino, I can be a customer here – it was something I appreciated and have tried to do with this project.” 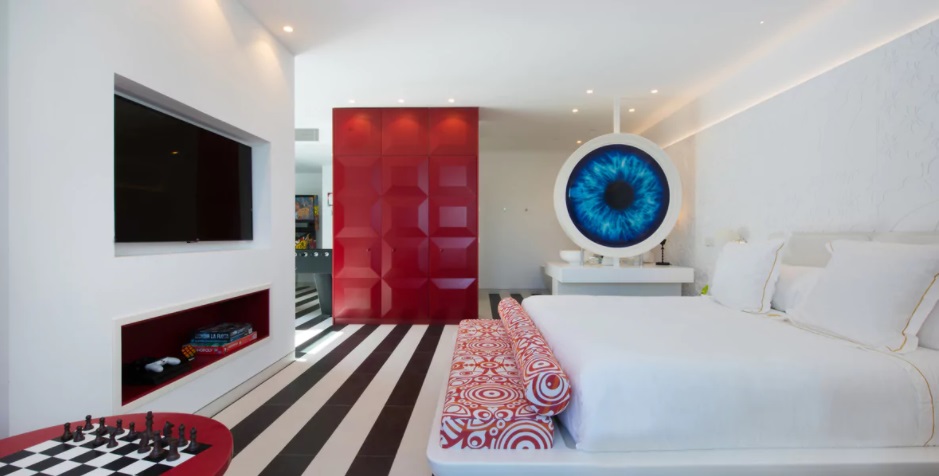 Having also spoken about his Mondrian Doha project, I ask Marcel what the future holds and if there are any exciting projects on the horizon.

“Yes, in fact, Doha was another project we spent a lot of time on and to have two openings in such a short space of time, it makes it look like the team and I do a lot of hotels, but in truth we only started on hotels in 2005 or so and we’ve only completed six or seven hotels in that time. So, it’s not a huge hospitality operation that we’ve created. We try to only do very prestigious projects that take a long time to get right; that require a tremendous amount of detail and research. We definitely pick and choose, but those half-dozen hotels, in the end, have really made their mark as a result – they are special places.” 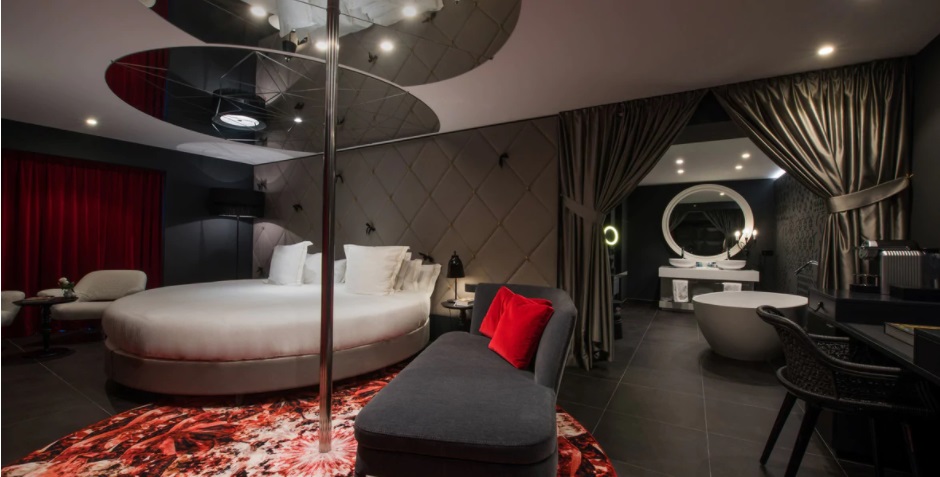 Does Marcel think there is too much uniformity in hospitality design? “It’s nothing against designers of some hotels, but there’s already so many in the same style – I don’t feel there’s a need for yet another one. We always try to do something really different that stands out and that gives guests a genuine experience. It’s not always easy to find the clients, operators or developers who share that vision of creating something that hasn’t been seen before,” he says. 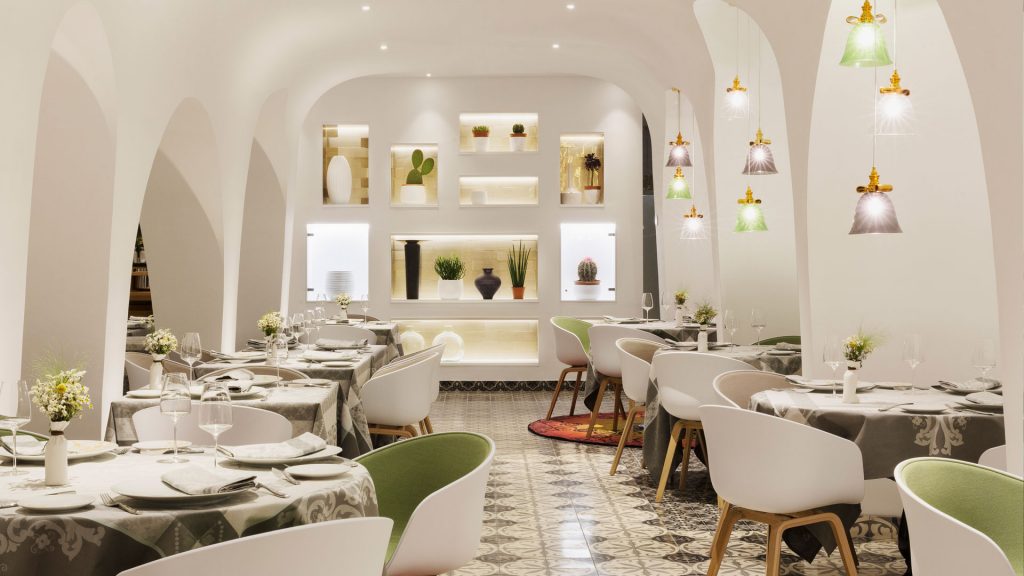 ‘Creating something that keeps the guests coming back for more’, I suggest…

“Yes, exactly – keep the guests coming back! It’s wonderful to get new guests – but no hotel or hospitality client can survive on unique customers alone. Clients have to go away and spread the word, show photos to their friends – and that’s why I was delighted to stay at the hotel last week, I spoke to fellow guests about it and they were suitably impressed; not just with the design but with the service levels which are genuinely excellent. The operator knows exactly what its doing, so I’m super happy and I’m sure the business will grow fast,” Marcel concludes.

With his mercurial touch on show, I can only agree with him – it’s a wonderfully striking property and will be a Mallorquin gem for years to come, I’m sure…

Based on an interview in September 2017