Checking in to Hotel Brooklyn in Manchester, the best of both worlds 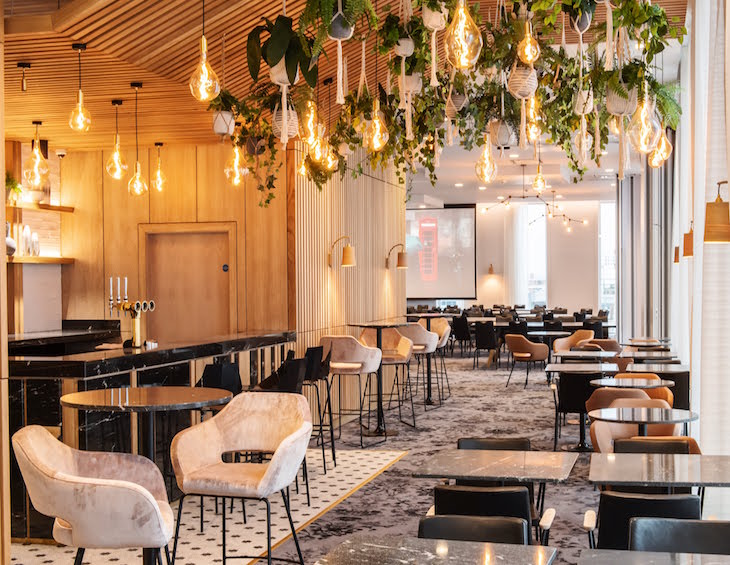 Two years after Hotel Designs reviewed Hotel Gotham, editor Hamish Kilburn is transported to New York City without having to leave Manchester as he checks in to review Hotel Brooklyn…

Could checking in to places like Hotel Brooklyn, in Manchester – experiencing the unequivocal flair and flavour of a destination from the safety and comfort of your once hometown – become a new method of travel in the post-pandemic world, I wonder?

Positioned, I’m told, in the exact spot which used to be the main stage for Manchester Pride, on the fringe of the Gay Village, Hotel Brooklyn is anything but closeted. Its playful and at times voyeuristic design scheme reflects the authentic personality of a city that I have grown to love, Manchester.

The hotel’s new-build shell not only sets it apart from other properties in the Bespoke Hotels portfolio, including its big sister in the same neighbourhood, Hotel Gotham, but it also presents a unique opportunity for the building and brand to play a role in rewriting the lifestyle hospitality scene in the north. 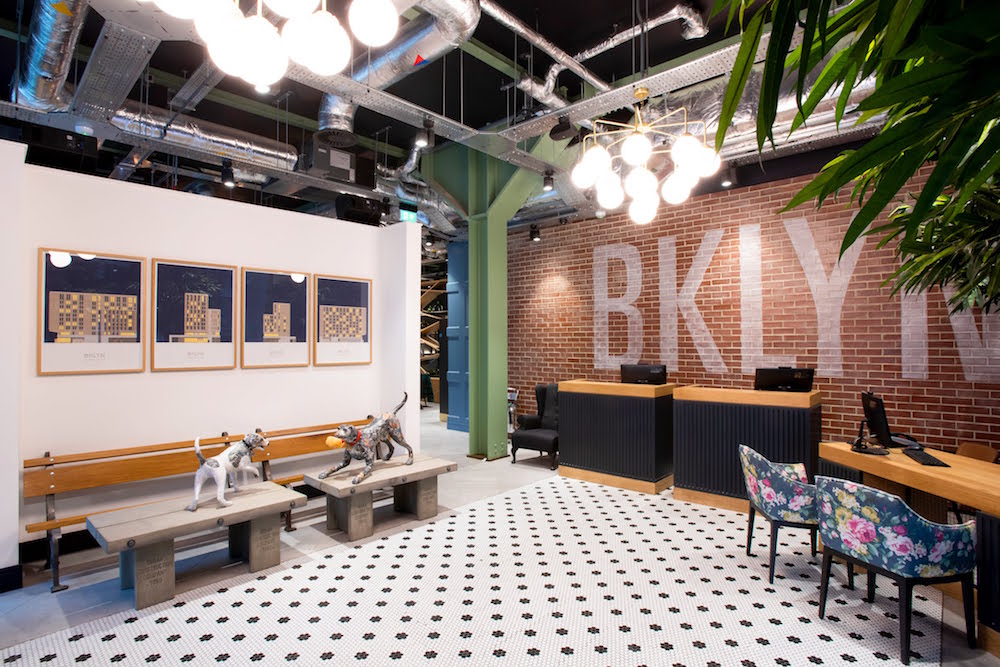 “Weaving the lines between Manchester and Brooklyn is a bold and inspirational project that draws many parallels and it was incredibly fun to do, partnering with some of the best local suppliers to create the finished look.” – Olly Redfern, lead interior designer of Squid Inc.

After much anticipation, and two years of sworn secrecy from me, Hotel Brooklyn finally opened in February with the aim to become an epicentre of eclectic substance and a home-away-from-home to the creators and style setters.

The concept for the hotel, which was imagined by design studio Squid Inc., was to create sanctuary for urban explorers – think of a living room away from home and a workplace away from the office. 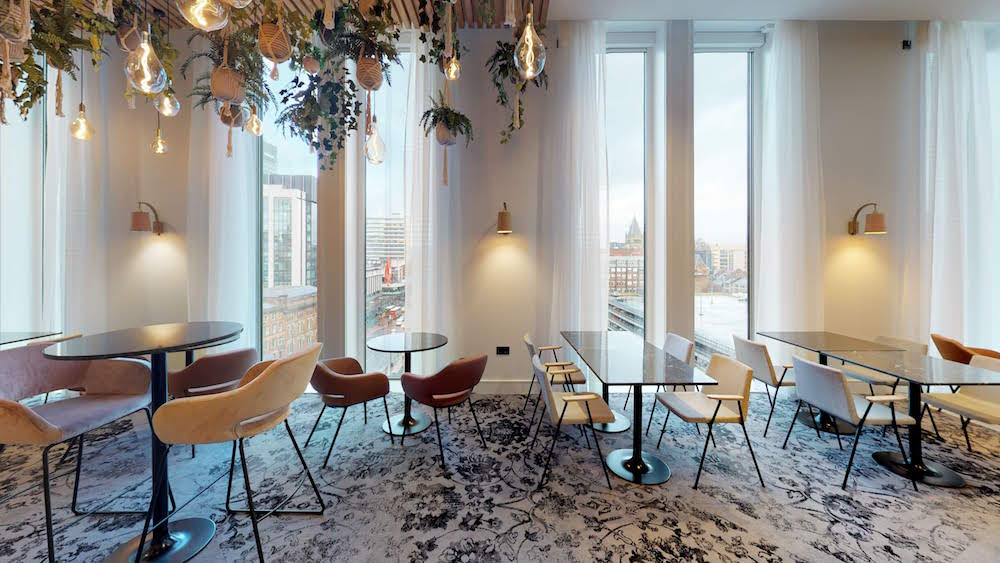 3,334 miles away from the hustle and bustle of Manhattan – the most obvious source of inspiration for hotel’s creation – Hotel Brooklyn is about raw, unpolished creativity, irresistible in its youthful heat. “Weaving the lines between Manchester and Brooklyn is a bold and inspirational project that draws many parallels and it was incredibly fun to do, partnering with some of the best local suppliers to create the finished look,” explained Olly Redfern, lead interior designer of Squid Inc. “It was an honour to work with Bespoke Hotels again on creating another iconic Manchester hotel with a strong identity and character.”

That bold spirit starts in the lobby, often blended together with the sound of live music as guests check in. The walk-in-the-park design scheme, complete with charming park benches under an exposed industrial ceiling, is uncluttered and smartly blends in biophilic design elements while reflecting modern, industrial vibes. Around the corner from the understated check-in desks is a tiered seated cinema, which offers a communal area unlike anywhere else in the city, where guests can relax and unwind. 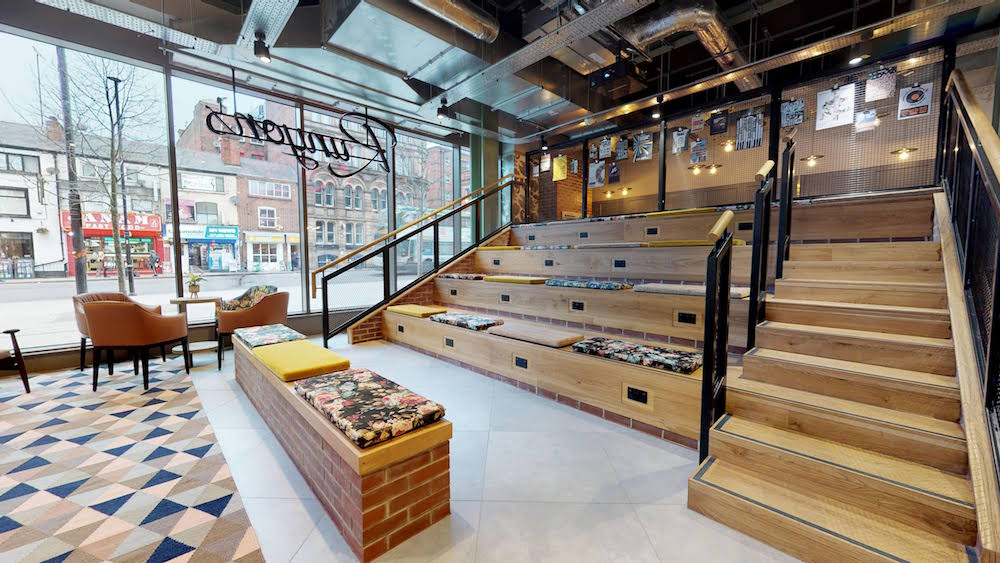 Image caption: The cinema adjacent to the lobby inside Hotel Brooklyn 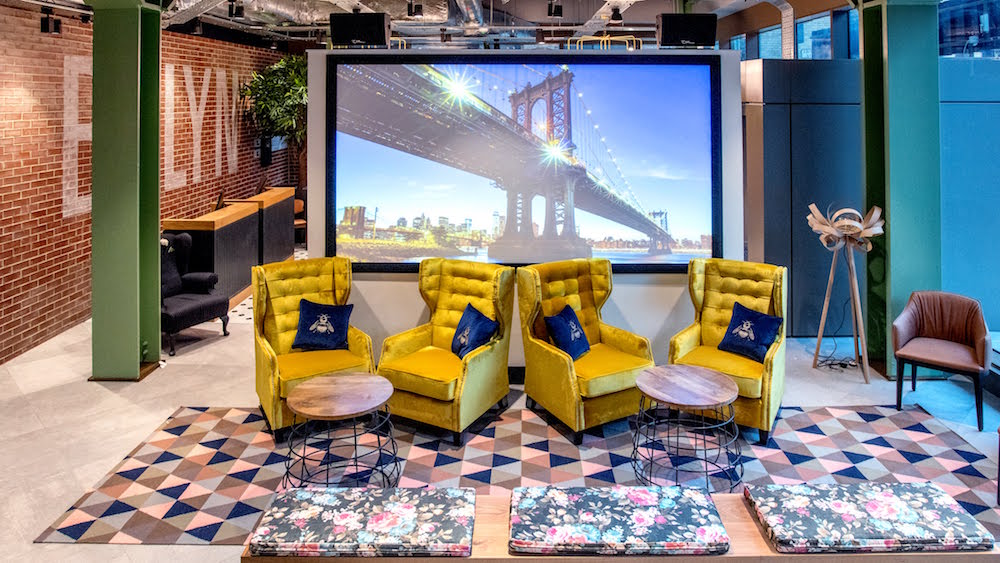 Image caption: The cinema adjacent to the lobby inside Hotel Brooklyn

Runyon’s Bar and Restaurant was named after New York journalist and writer Damon Runyon, who was renowned for his depictions of Brooklyn characters. The F&B area, complete with chandeliers made from upcycled glass bottles, is an energetic and refreshing in its design. The iconic backdrop of a wall mural featuring the hybrid cable-stayed Brooklyn Bridge, which was the world’s first steel-wire suspension bridge and is one of the oldest roadway bridges in the United States of America, can be seen from all angles of the restaurant and further distorts guests’ sense of place. 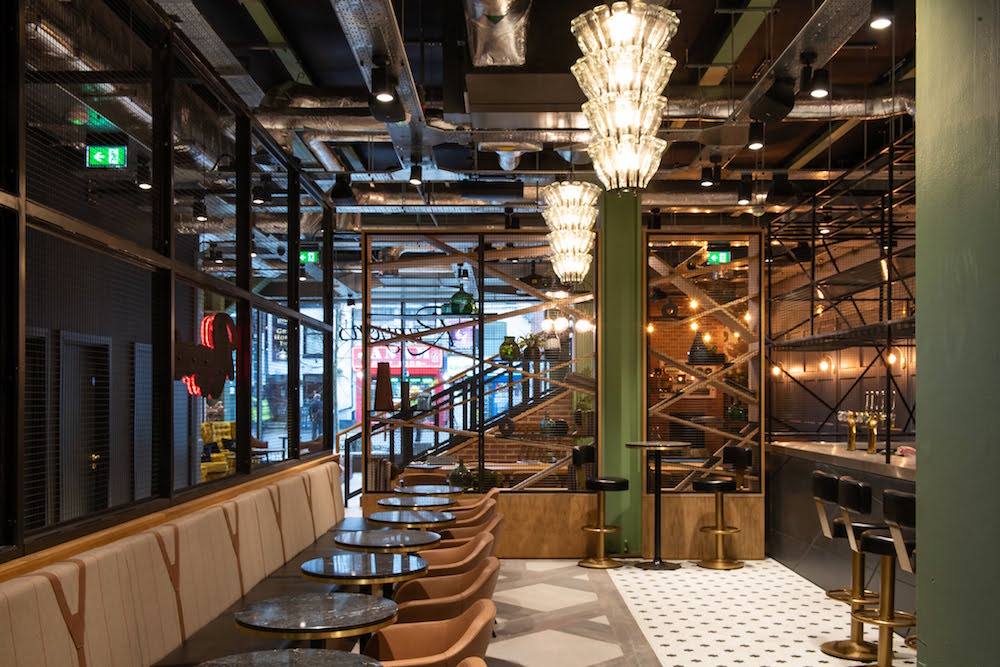 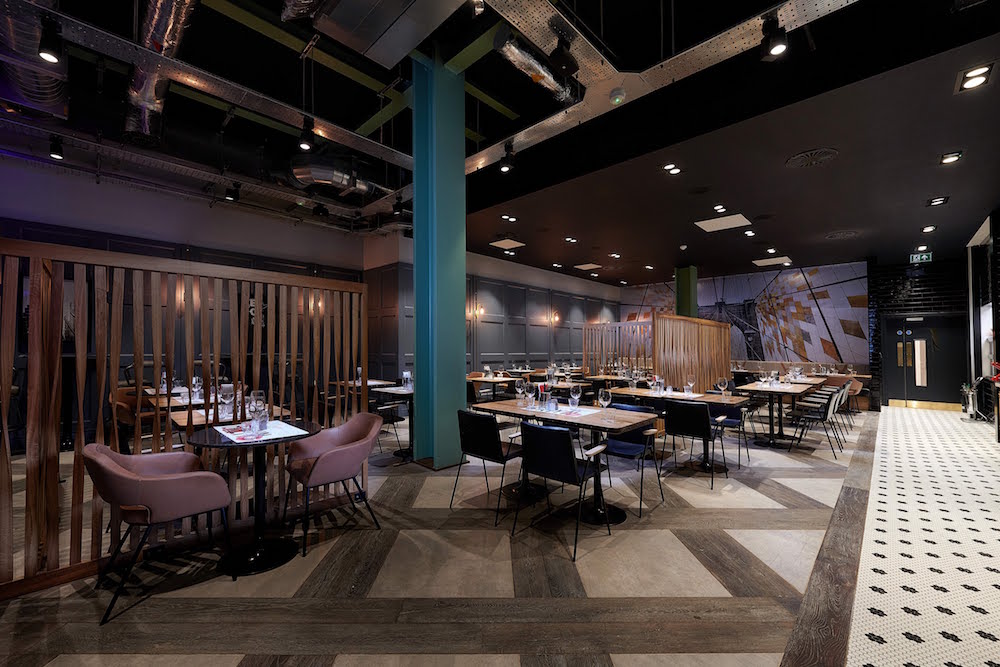 Upstairs, while the 189 rooms are impressively designed, it is the 18 fully accessible suites that set the hotel aside from others. With Bespoke Hotels being award-winningly famous for pioneering stylish accessibility in hospitality for all, the group turned to Motionspot, the UK’s leading accessible design company, to help delicately balance style and functionality. “Accessible accommodation at Hotel Brooklyn features subtle details like basins with integrated hand grips, removable matt black grab rails, accessible bedroom storage and a hidden ceiling track hoist”, said Ed Warner, Founder and CEO of Motionspot. “We hope this high level of attention paid to inclusivity will make Hotel Brooklyn one of the most sought-after venues for guests of all abilities.” 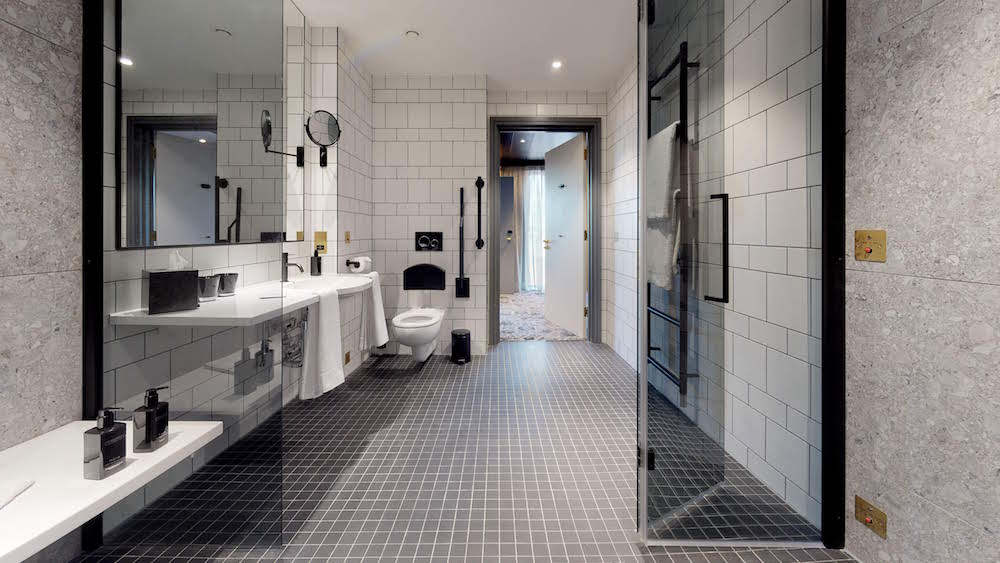 The aesthetic of each guestrooms was inspired by Brooklyn’s loft spaces, peppered with immaculate features that favour quality and high-spec finishes. The beds, for example, have brass adornments, while Turkish-inspired carpets by Brintons contrast with the concrete walls. Wooden pink and blue chairs, supplied by TON, compliment black desks, while modern lamps by R&S Robertson and a traditional dial phone from Orbis add to the interior’s overall mise en scene. 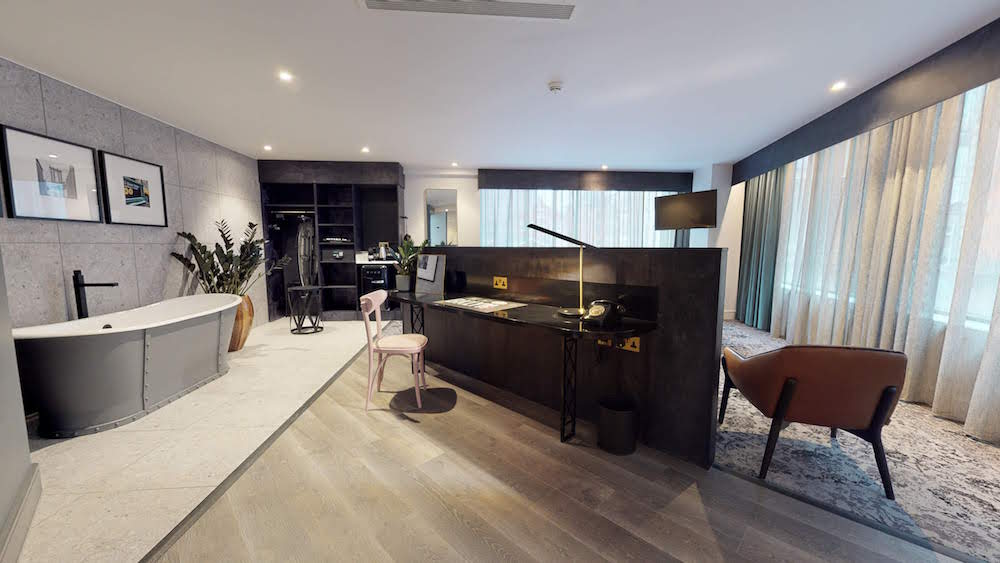 The modern bathrooms within the rooms feature matt-black fixtures and fittings from Geberit, which stand out against a simple white-tiled backdrop. The majority of bathroom configurations in each room have been cleverly-angled to allow their back walls and semi opaque windows to look out across the bedroom – a nod, I feel, to the city’s voyeuristic and playful side. 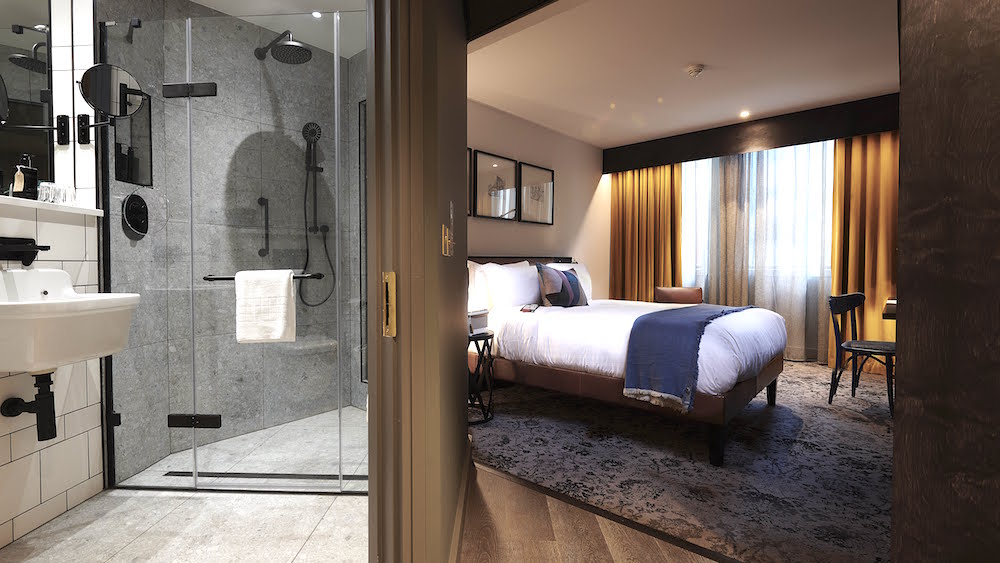 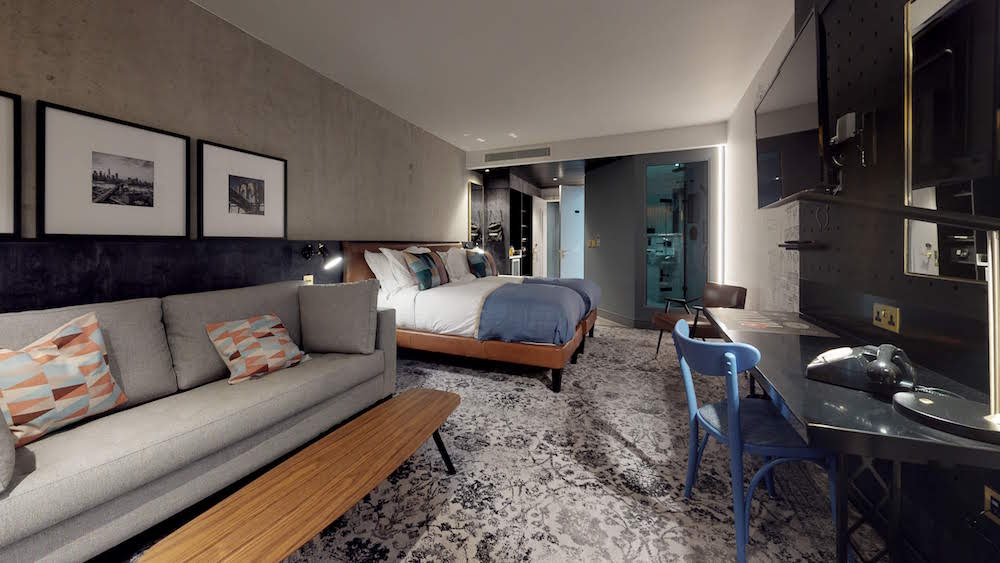 On the top floor, the hotel’s meeting and event space has been aptly named, Brooklyn Heights. Complete with hanging baskets and panoramic vistas across the city, Salvation Bar has the swag to become a new destination venue. 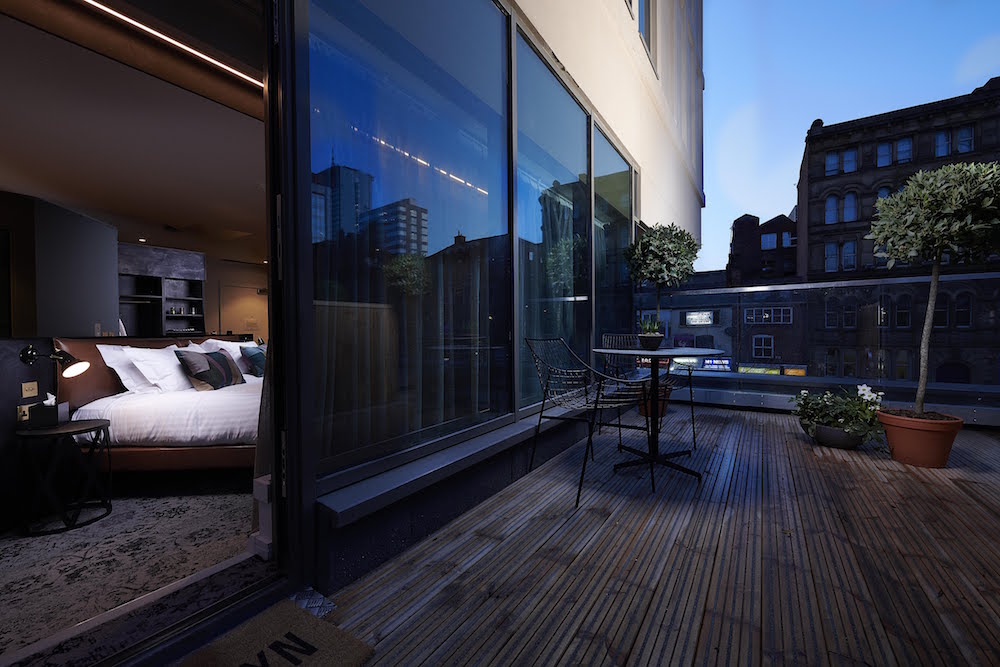 Now familiar with its surroundings, Hotel Brooklyn has redefined luxury lifestyle in the city by bringing together the best elements of two vivacious destinations. With another Hotel Brooklyn ‘lair’ in Leicester on the way, and Bespoke Hotels welcoming a new CEO in Thomas Greenall who is taking the helm, the Manchester property is officially re-emerging from the Covid-19 hospitality slumber on August 21, and it is determined not be ignored as a middle sibling. With its comfortable, timeless guestroom interiors layered with vibrant and adaptable public areas, I predict that Hotel Brooklyn will be standing loud and proud, giving guests checking in each time an accurate taste of Brooklyn in Manchester, for many years to come.