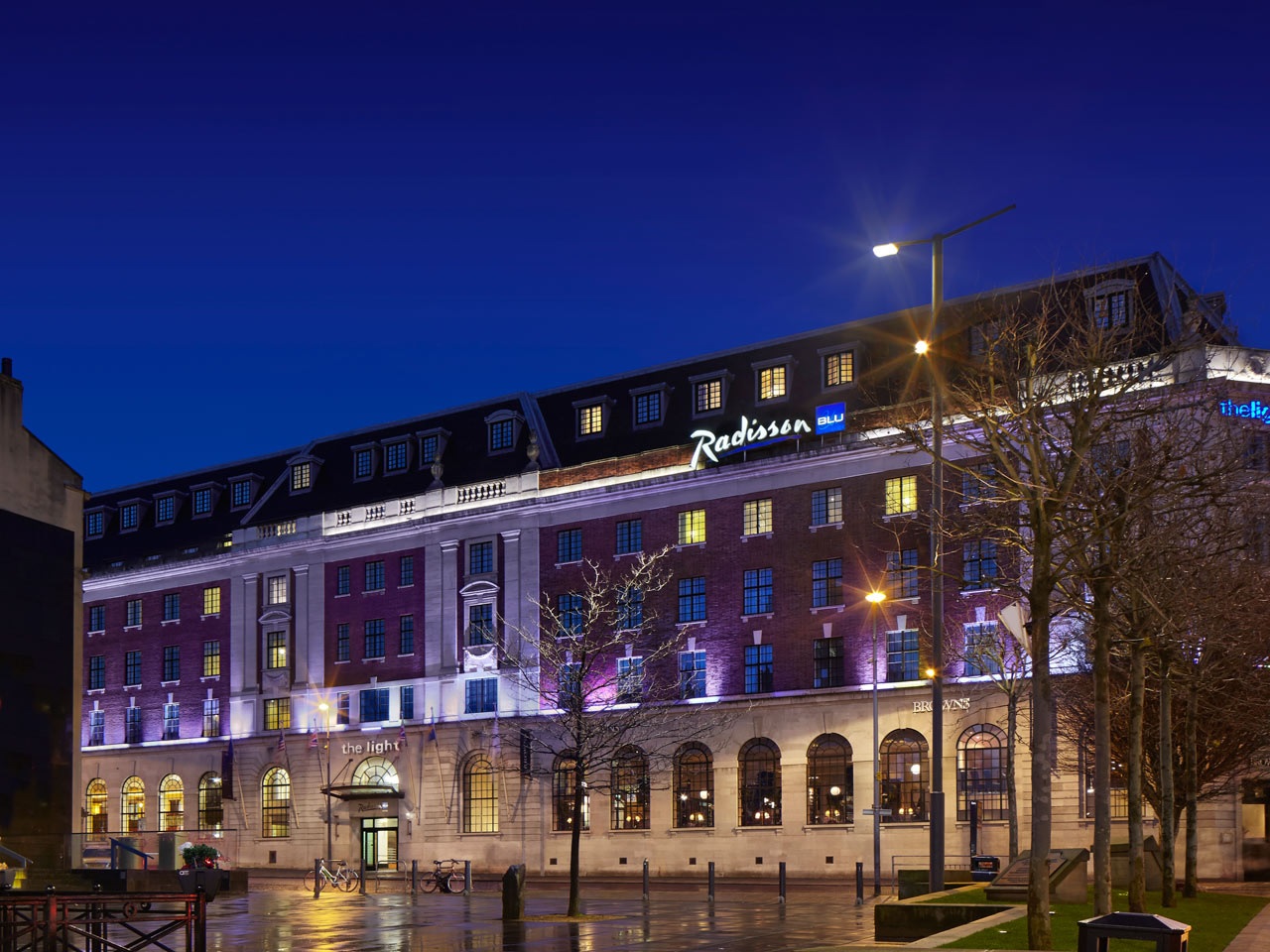 The Carlson Rezidor hotel group, over the last decade or so, has been steadily building up and expanding its portfolio across the globe with strategic purchases and a prudent selection of locations – think Radisson Blu’s planned and continuing expansion in Africa. With nearly 1,500 hotels and 170,000 rooms, its progress has been successful despite being a relative ‘David’ to the ‘Goliaths’ of Hilton and the now-merging Marriott-Starwood group.

And one of its brands in particular (since SAS pulled its partnership in 2009) has benefitted considerably. The Radisson Blu collection now boasts nearly 400 hotels open or in development in more than 80 locations around the world. And whenever I’ve visited a Radisson Blu property, from Dubai Media City to London Stansted, I’ve always found the brand’s offerings to be contemporarily designed and focused – usually with a lean towards the business traveller – and the service to be of a high standard. This recently revamped and refurbished Leeds chapter is no different.

The hotel is contained within the walls of the centrally-located and well-restored former home of the Leeds Permanent Building Society and directly neighbours the commercial complex ‘The Light’. As I arrive, I consider this fact might cause a noise pollution issue once inside the hotel, but my fears are allayed by the positioning of the public areas away from any of the main thoroughfares in the shopping complex.

This location means sprawling space is at a premium, so the ground level of the hotel is split cleverly between lobby area and bar/dining area to create the feeling of two distinct spaces, despite the two bleeding into each other structurally. One quick check-in and warm welcome from the manager Valerie Donaldson later and I’m walking through the corridor to my room, which gives me a chance to get a glimpse of the ‘doughnut’ structure of the inner well of the building from where the near-150 rooms in the hotel branch away and explains how the majority of rooms aren’t disturbed by activity in the shopping complex next door. 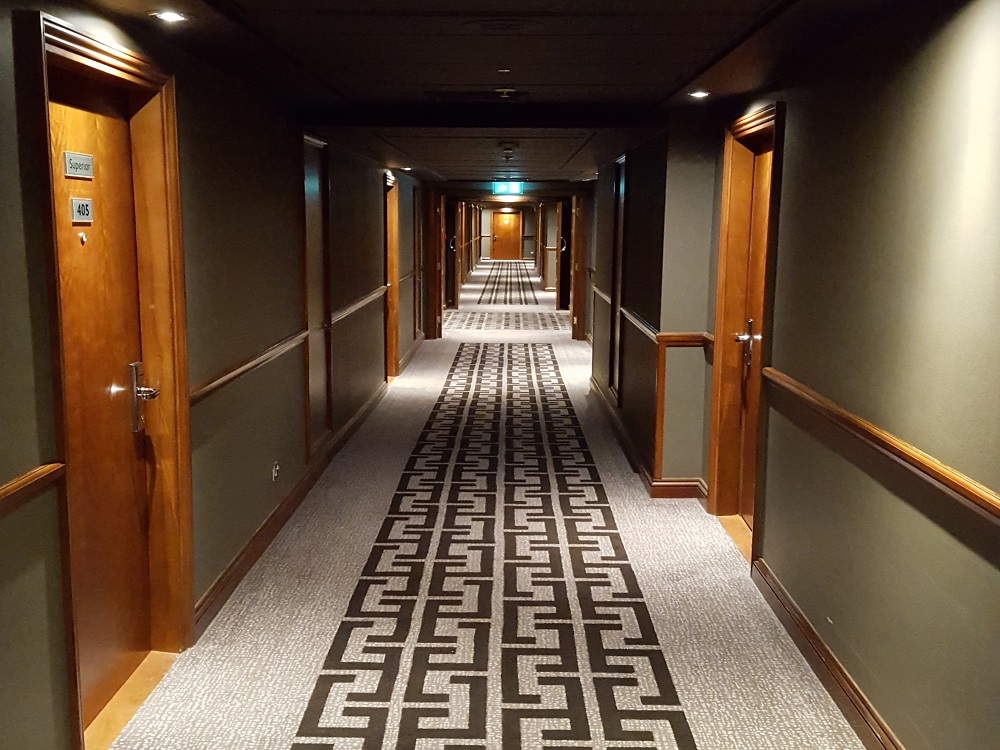 The darker, warmer hues of the corridors – with their grey-brown carpets, olive green wallcoverings and slight vintage feel – contrast with the cooler, industrial palettes of my modern room. I’m staying in a Junior Suite and as soon as I enter I’m struck by the considerable size of the room, especially considering the architect has had to factor in a curve of the exterior wall of the building. And, as mentioned, the room interior stands out immediately as having been designed to reflect an image of the modernity that the brand prides itself on espousing. 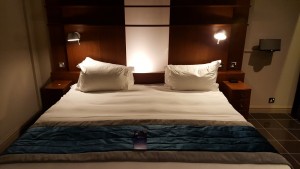 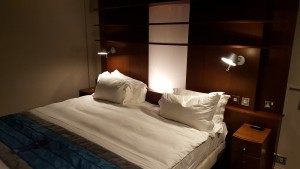 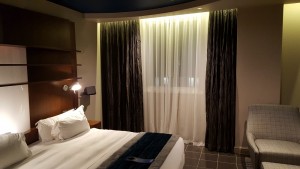 There are several little touches of clever design around the room; like the wooden-finished ‘pillar’, which quadruples up as a TV stand, a home for the mini-bar and tea and coffee facilities as well as a means of discreetly housing the mains sockets needed for the work desk – it’s a brilliant use of space and a tidy, well-thought-through solution to the question of where to locate all of these elements. As a rule, I’m a big fan of rooms with curved walls for the obvious aesthetic reasons, and it’s no different here with the designers having used the feature to great effect in order to light the room. (See image 2, below). 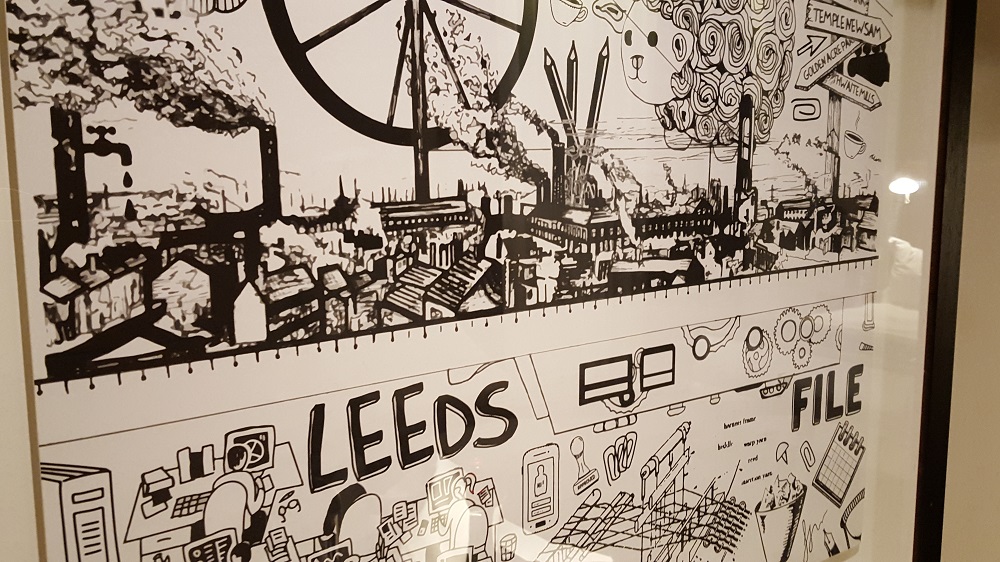 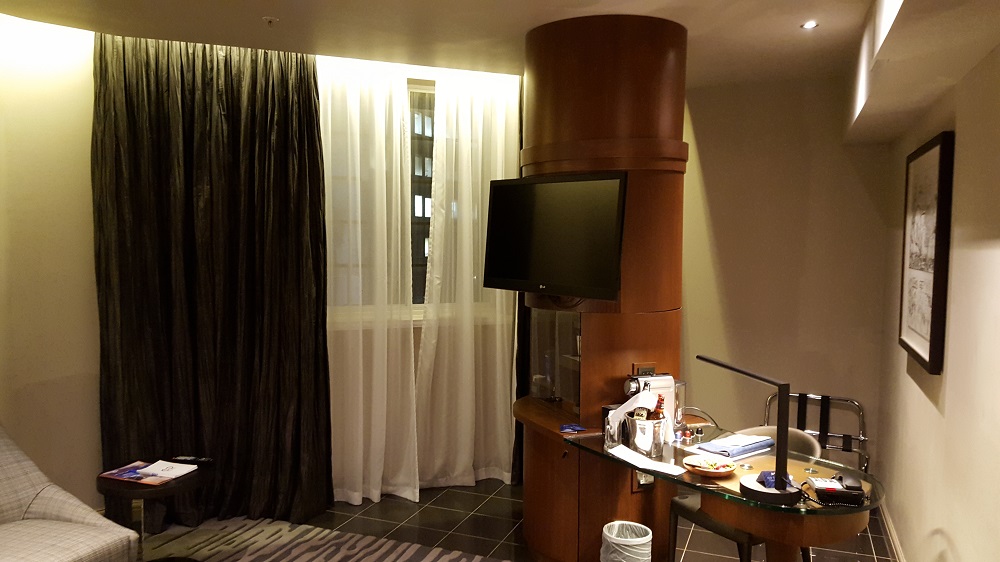 Further touches such as the ceiling paintwork matching the fabric of the soft furnishing on the bed, the impressive headboard of which all add to the feeling of the room being in the hands of a thoughtful and thematically-minded designer. I am surprised to see the bold use of coal-grey floor tiles throughout the bedroom and living space – mostly because, while these complement the clinical and modern feel, it’s a vast space for the housekeeping team to ensure is always clean. I needn’t have worried, as both underneath the bed and under the 12’x6’ rug were spotless. 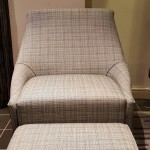 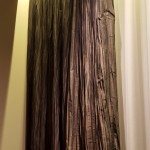 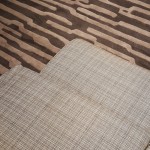 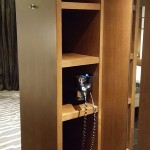 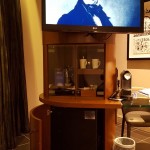 The bathroom’s use of tiles creates a completely different feel, with tiling making up a dazzling three-quarter-wall of brilliant blue overlaid on a beige-brown, clear wall. (See images below) Likewise, the half-moon glass basin container and simplistically functional finishing of the bathroom fittings (provided by HD Directory members GROHE) work very well. 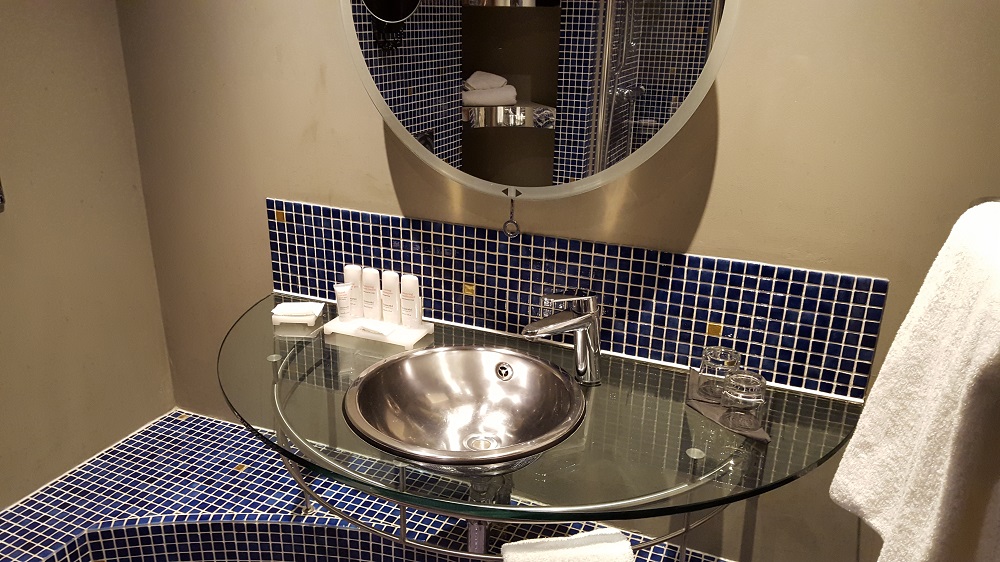 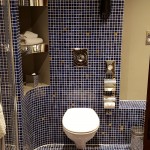 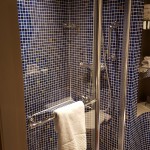 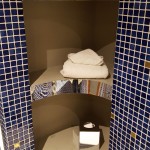 There are some tell-tale signs that this is a hotel designed with business users in mind; namely the ‘economical’ wardrobe space available – perfect for short stays but not practical for more than two people staying for several nights – and the good number of mains sockets strategically located around the room for the inevitable number of devices required on a business trip. Given this focus, it came as no surprise to see the level of quality in the design and finish of the hotel’s meeting facilities located on the newly refurbished mezzanine level. The space is flexible enough to offer a range of events – especially with the breakout room having the space for a full bar – and a touch I particularly like is the meeting room titles; each named after a Yorkshire-related theme and containing small items in each room to reflect its individual title. 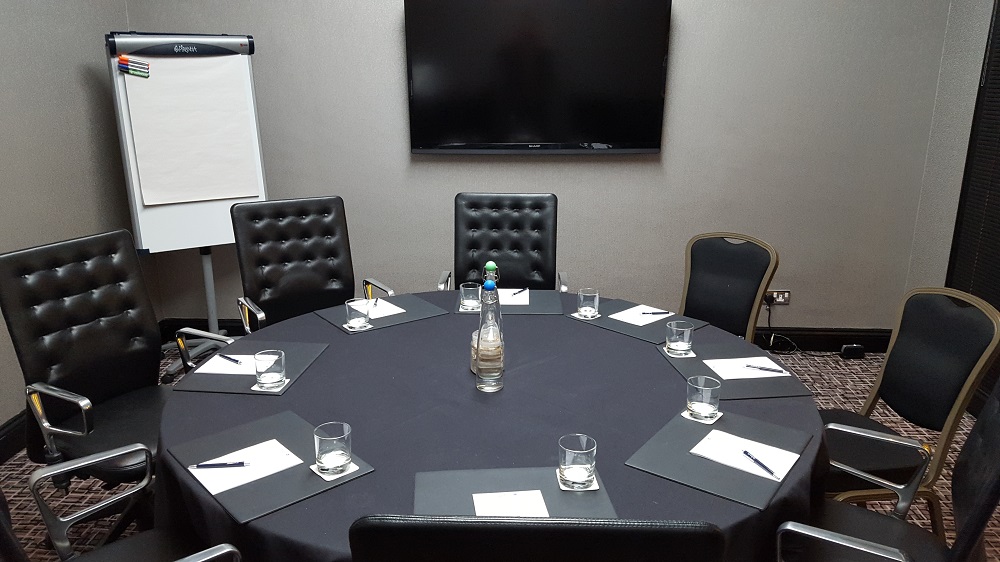 The hotel is unique in the UK, and indeed outside of the US, in as much as it houses the only Fire Lake Grill House & Cocktail Bar – the flagship restaurant of the Minnesota-based hotel brand – beyond American borders. As a dining option for guests for breakfast, lunch or dinner, this ‘industrial chic’, left-field-decorated eatery is impressive. The conversation-starting focal points of design include the huge, striking wall display of Leeds-born actor Peter O’Toole brought to life by upward-facing lamps as well as a floor-to-ceiling fire pit. Having done prior research into the previous space and its interiors, which were classically-inspired and somewhat dated, this incarnation is a huge improvement. (A FULL REVIEW OF FIRE LAKE CAN BE READ ON OUR SISTER SITE PA LIFE)… 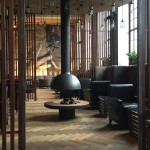 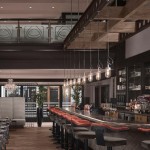 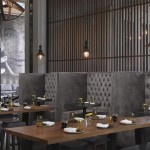 Combine this four-star Leeds hotel with its restaurant and its meeting spaces and you have a convincing case as to why the wider Radisson Blu collection has to be one of the most consistent upper-upscale brands globally. Like the other properties in the chain I’ve visited and stayed in, this property will do a good trade with weekend-breakers and even more so with businesspeople. But make no mistake, this is a well-designed hotel where comfort hasn’t been forgotten in the planning-to-production process – indeed, who says business-like practicality can’t have a touch of luxury? Add to this the fact manager Valerie Donaldson has a professional, committed team working with her and you have the foundations for a very successful property for the Radisson Blu brand.

Indeed, I’m reminded of a note I read when I arrived in my room under the heading ‘Manager’s Guarantee’ which said: ‘We’ll make your stay right or you won’t pay’. The manager can sleep easy because, on this evidence, she won’t need to be handing out complimentary stays very often at all…

Based on a stay in January 2016
www.radissonblu.com