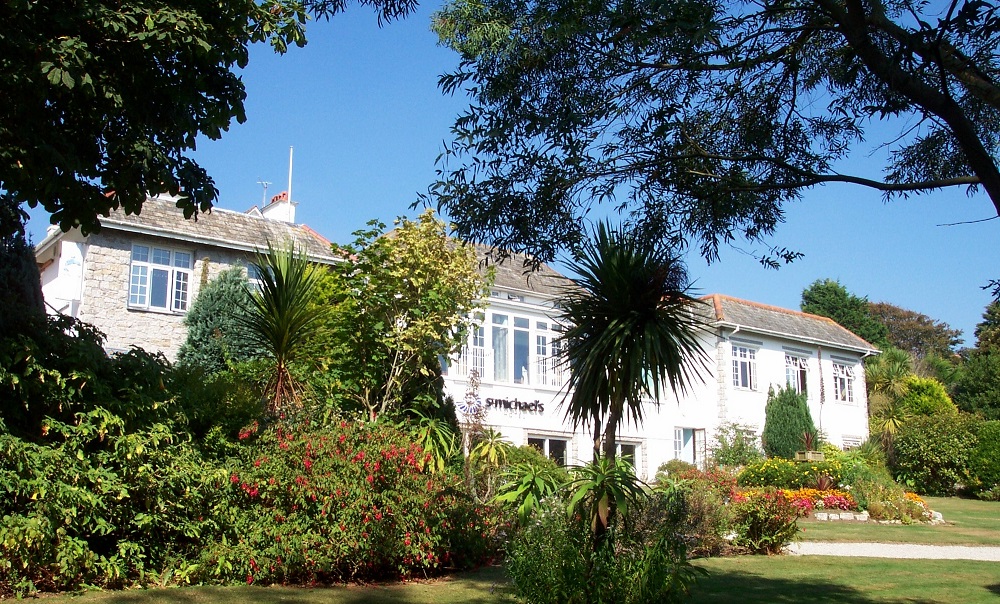 Falmouth has its place in history, its place as a centre of the web. Not the internet but a network of Royal Mail packet boats – the ‘snail-mail’ of the 17th and 18th Century. From here packet boats took mail, supplies and wages to British armies abroad through a web of sea routes at a speed slightly slower than 6 megabits a second.

Falmouth was also a centre for orders for ships arriving in northern Europe, far enough down the channel to be safe from the marauding French. Here ships would arrive in the world’s third largest natural harbour, the sensible place for ship masters to stop to repair and revictual their ships coming across the Atlantic or up from southern seas. Here they collected orders from ship owners as to where their cargoes could go onward for maximum profit.

So the town was important, boasting two castles and fortifications enough to satisfy any history buff, whilst the grandeur of a town that was second only to London in the number of Embassies (representing those foreign sails making landfall here), still haunts the narrow streets.

Above all this is a maritime town, a jewel of the famed ‘Cornish Riviera’ and the refurbished St. Michael’s Hotel is a gem of Falmouth now. This is a 1920’s building that oddly became an hotel in 1940. I suppose once the conversion to an hotel was underway a little local disagreement with Continental neighbours (perhaps) was no reason to stop, but it was a curious time to launch a new hotel even so. 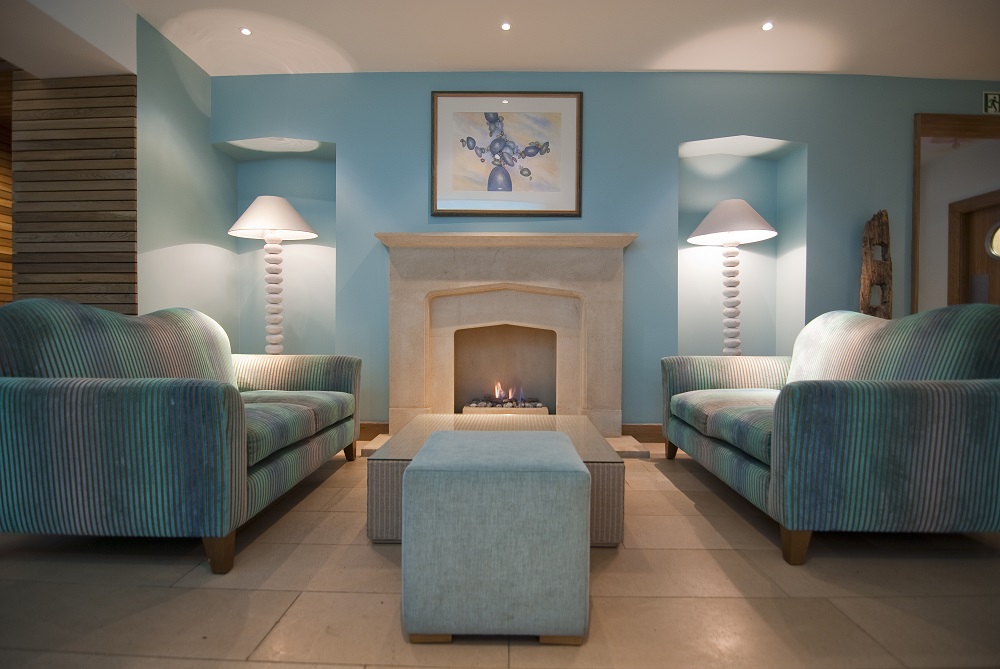 Like many English seaside hotels the hotel gradually slid into decay and presented an opportunity for new owners to transform into a stylish resort hotel, shaking off the tired tradition of the English seaside in favour of creating an exercise in theatrical charm. For theatrical in many ways this hotel is, in a slightly restrained English manner, mixing concepts and colour in an eclectic mélange that works delightfully.

Theatre starts outside with graphics creating a branding through the use of sails and sailcloth, echoing modern Falmouth’s role as a major builder of luxury yachts and a home to one of the UK’s finest marinas. The external sail motif and the large mural image in reception is enhanced by the addition of real sails and rope echoing Falmouth’s past and present significance with the sea.

Falmouth is also second home to the National Maritime Museum of what was once one of the world’s leading maritime nations. Being in Cornwall, the Museum and hotel alike only acknowledge in passing that they are in England preferring, like the Bretons in France, to pretend they are a separate people: the Cornish, and one of the six Celtic nations.

With family from just across the border in Devon I can, of course, only laugh at their presumptions. 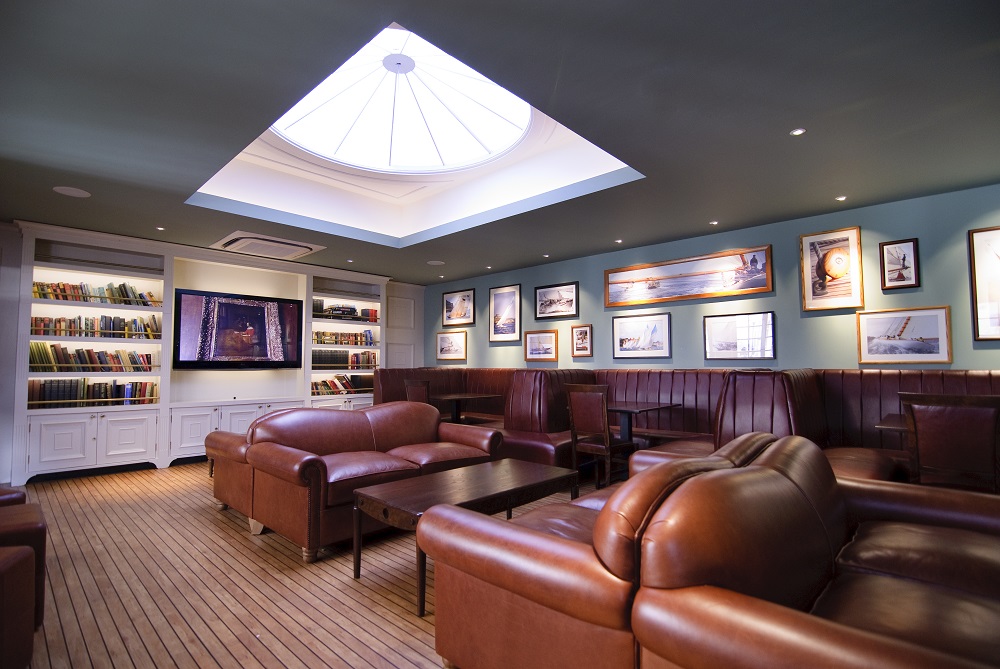 The Reception desk is a lifeboat behind which curved ship-type sliding doors conceal offices. The entrance is marked by two sails and the ‘boardwalk feel’ of the lobby is enhanced by a large image of sailing vessels, the sail of one of which is a real canvas and rope artefact.

From the Reception desk with its faux boat, mast, creels and sails, it is possible to see through into the bar and restaurant. The short passageway, off which goes the staircase to many of the bedrooms, leads not to more slightly Disneyesque theatricals but to sophisticated interiors, linked to reception by colour and in which the nautical theme is played down to subtle hints – portholes in doors, pebbles and fish tanks.

The portholes look into a walk-in wine cellar and award winning Cornish Camel Valley wines feature strongly on the wine list. Walls have been removed to create a large space flooded with light with views across the gardens into the bay beyond. The bar here is the focus and is a delight – a confection of coloured light and tiles, mixing up and down lights with under lighting of the bar top. The wall behind the lounge seating is rippled with subtle echoes of the sinuous ridges waves make in sand and concealed lighting gently changes colour, washing the wall with pale calming colours. There is a small lounge area and a focal point in front of a fire place in which flames flicker warmly.

Through a doorway is a lounge configured like a luxury yacht, masculine in feel, with a floor like a yacht’s decking with leather seating. Already this area is becoming popular for informal business meetings and the large TV is permanently tuned to Bloomberg emphasising this. 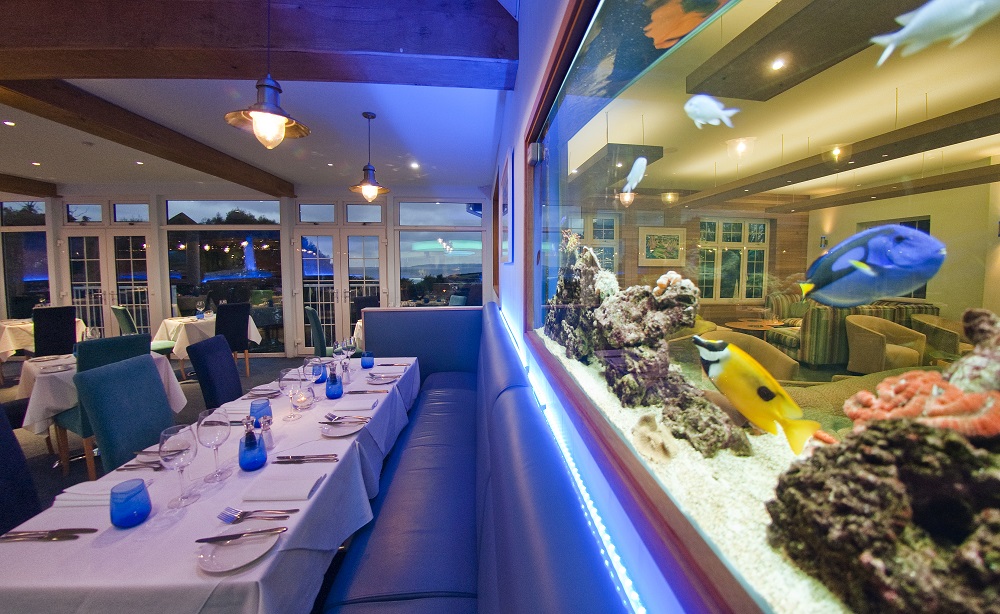 Beyond the bar is a lounge area where windows along one side present spectacular views across the bay, overlooking the waves which creates some of the best surfing in Europe. Cornwall is renowned for its surfing industry and is a major element of the tourist business in the county.
Another lounge flows down to large picture windows and is separated from the restaurant area by fish tanks and a mirror. This and the restaurant are built out above the swimming pool area. The new owner extended and opened this part of the hotel to maximise the views of the bay and Pendennis Castle, which built in the 16th Century when Falmouth began to attain its vital role in the maritime life of the nation.

This area is quite separate from the bar and the club lounge and offers a pre-dinner drinks space or a place for coffee and brandy afterwards. By day of course it is great for teas or sandwiches. The restaurant varies its layout using different table shapes, etched glass screens and strips of coloured LED lighting to create private areas, breaking the big space up into smaller and more intimate seating arrangements. Colour plays an important role in unifying these disparate elements, with etched glass used throughout the hotel to pull things together.

There are two small conference rooms as well as a larger function room with its own bar, and the hotel, whilst offering free WiFi throughout, also offers internet stations for guests. The division between resort and business is well balanced with the club lounge just keeping enough of the hotel clearly oriented around the needs of business – it could almost be declared a child-free zone as I imagine that in school holidays this will be a very popular destination hotel for families.

The simple finishes are carried through into the bedrooms and the spa area, but here and there are touches that remind one of the location. Ground floor public toilets for example are presented as a pair of beach hut changing rooms and timber cladding is frequently used to evoke that ‘seaside’ feeling. 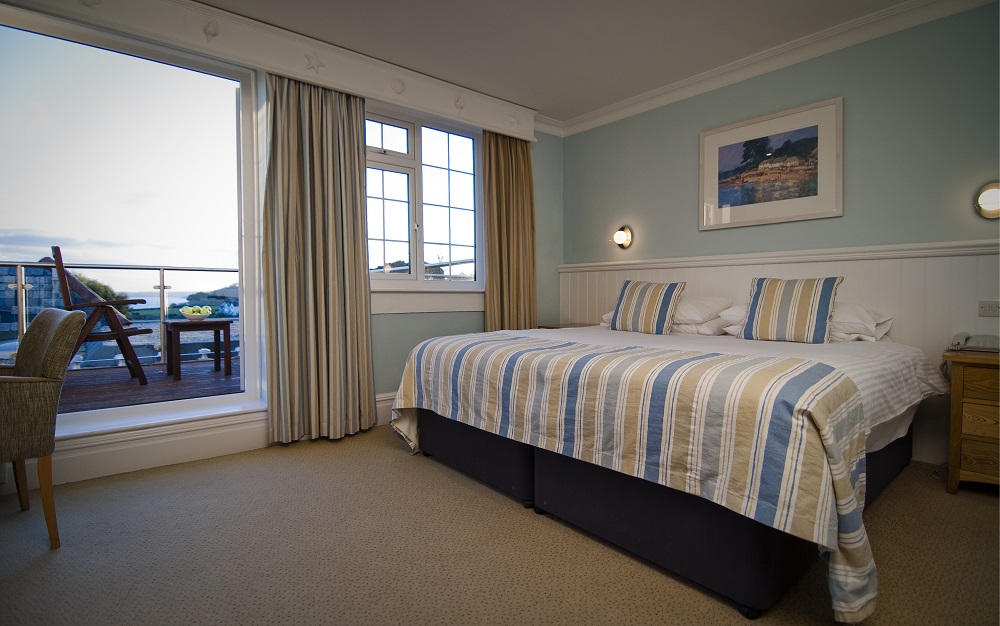 In the bedrooms timber cladding is used again and the colour is carried through, along with ‘seaside’ art images, which helps keep the coherence of the design. As usual in an old hotel there is a great variety of room types. There are suites, and larger rooms have terraces. All have good work desks and plenty of drawer space for those wanting a longer stay than a couple of nights.
The bedrooms have a sophisticated simplicity, their varying sizes giving them an individuality that comes by default with older buildings. The choice of natural finish to the timber furniture harmonises with the driftwood used elsewhere. The use of timber, from flooring to furniture and skylight soffits, is enhanced by the use of driftwood in feature pieces and lamps made of rocks. The colour palette varies in tone but not in hue.

Whilst avoiding becoming kitsch the seaside theme is taken neatly through the bedrooms with striped fabrics echoing deck chairs and simple white and eau-de-nil colour palette making everything look fresh and clean. Most rooms have sea views and the sound of gulls.
In the Spa area, rope holds up driftwood display shelves and the timber treatment room panelling echoes the beach huts imagery deliberately invoked with the decor for the public toilet area.

The Spa is very busy and has a very healthy local membership for its gym and four treatment rooms. The pool has been enlarged and opens onto a wide terrace in the summer months on the edge of notable gardens. Gardens are exotic in English terms as the area is warmed by the gulf stream and has a warmer climate than much of England, allowing more delicate and exotic species to flourish. 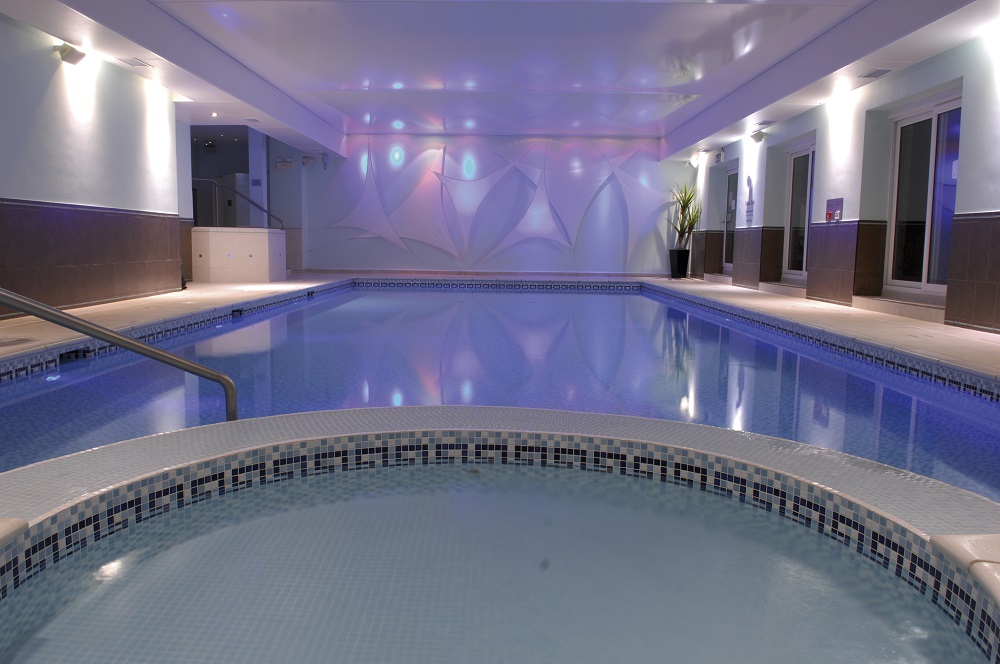 This is a classic English seaside hotel, which with a sensitive but ambitious makeover transcends the run of the mill to become comparable with hotel such as the Marine (of a similar age) or the 12 Apostles (and the spa is better).

Although not on the beach it is certainly of the beach. Its gardens are separated from the shoreline by the sea road, its elevated position giving it views the redesign has capitalised on.

The refurbishment is already bringing the enhanced occupancy levels it deserves. As petrol prices rise and foreign travel becomes once again the preserve of the rich, English seaside hotels need to emulate the standards set here.

From a visit in January 2011. Words and Pictures ©Patrick Goff