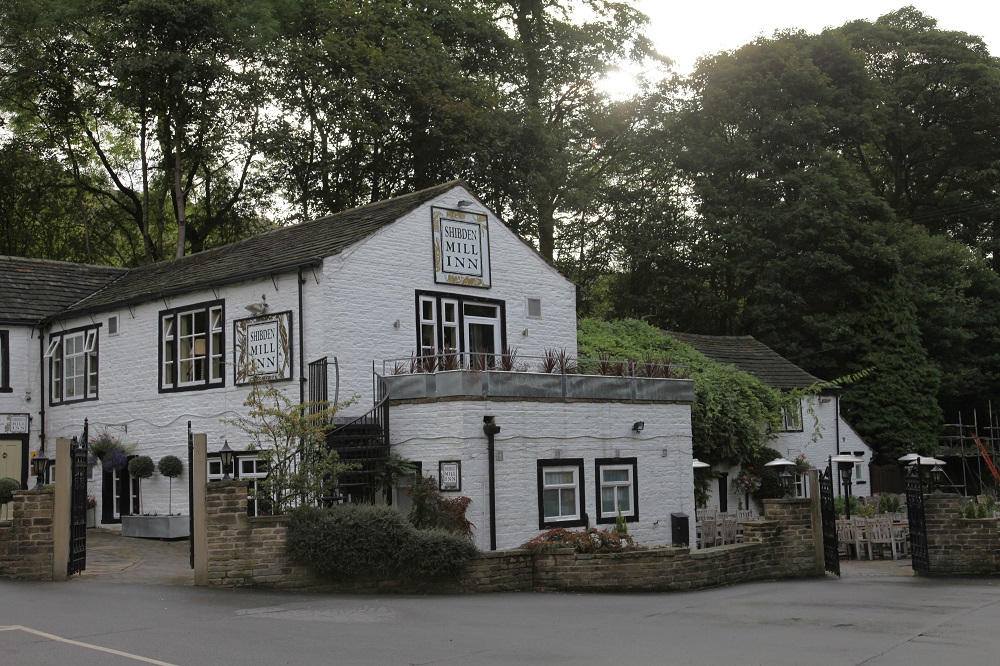 This is one of those accidental Reviews. They happen when a stay en-route to a targeted hotel or for some other reason finds me staying in an interesting hotel (in this case an Inn) by random chance. Shibden Mill was local to my hosts, Andy Thornton, when I was writing their Company Profile for the DesignClub. Pub/hotels are an interesting phenomenon that I have written about before (notably recently the Alma, one of Wandsworth’s Youngs Brewery hotels). Often the food is overrated, and rooms fail to compete with standard hotels. However the independently owned Shibden Mill is one of a growing number of properties, like the Alma, which are exceptions to these generalisations.

If you didn’t know about Shibden Mill, you would never find it. Saying it’s just outside Halifax in West Yorkshire is not a lot of help. My navigator started to doubt the satnav as we plunged down narrower and narrower cobbled tracks – she has reason, as Volkswagen once told me I couldn’t expect detailed accuracy as the ‘UK is on the periphery of Europe’. However we have come to habitually drive with very little by way of back-up maps so on this occasion we had no option but to follow directions scrupulously down into the secret valley in which the Mill nestles. 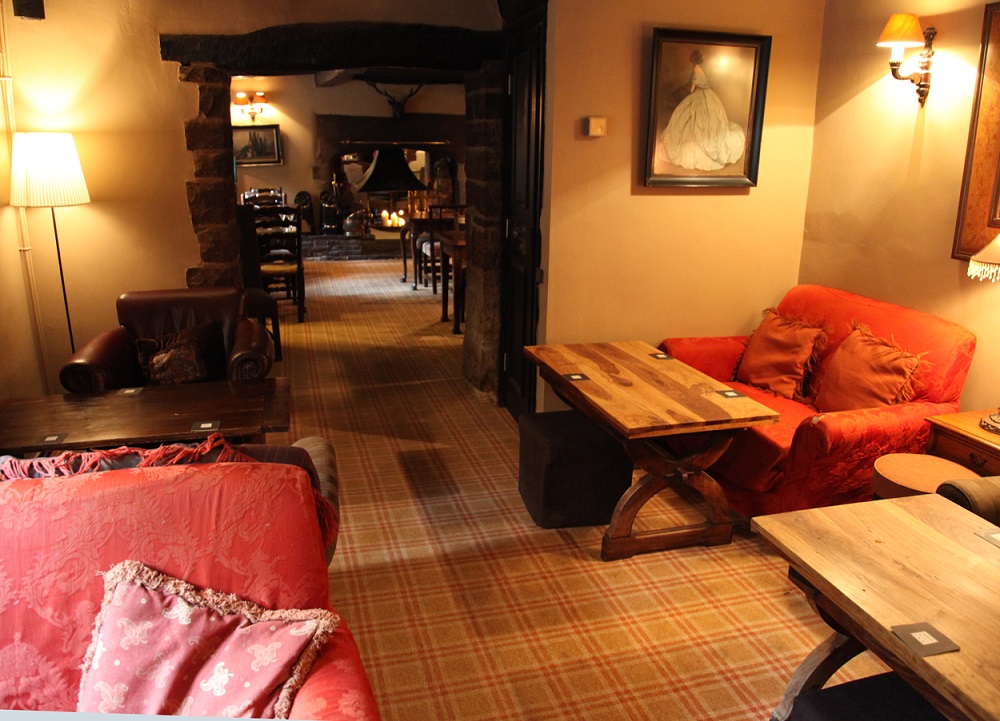 It was a Mill once, in the 17th Century, about the time settlers were landing on the coast of the Americas. The mill and its attached barns have been subsumed into the adjacent hostelry, creating 11 en-suite bedrooms, a reception and small guest lounge quite separate from the pub. Tucked away in a fold of the Shibden valley it has been extended and converted by the owners, Simon and Caitlin Heaton, steadily over the years. In that statement lies the dichotomy of pubs as hotels.

Pubs like the Alma benefit from the investment power of major operators. Its £2.5million (at current rates about $4million) cost has produced a 26 bedroom hotel with a pub/restaurant attached. Professionally designed, executed and managed it was able to employ expertise in both design and operation denied to most owner occupiers. Shibden Mill Inn is a conversion of love by owners who have steadily over years put heart and soul into creating a property that reflects design in its more domestic form, but where the passion for comfort, service and food provides the guest with an experience that the major operators struggle to emulate.

So is it good design? Is it worth a Review, if it is domestic? Well it isn’t domestic – it just lacks the panache that maybe (and it is a maybe) a professional designer would have given it. Too often a professional designer would have been employed on professional fees only to produce a result that would not have matched what the owners have created here. So why does this work? What made me want to write about it? The simple answer is that the operational philosophy has driven the design. Shibden Mill Inn is an evolution – unlike the Alma which was a major reconstruction. The true comparative for this might be the Manor House in Dronfield, but the smaller public spaces there have not allowed the kind of old fashioned sinking into luxury feel that has been arrived at here. In part the space has allowed the luxury, indeed is the main luxury. In part it is a triumph for local sourcing – not just of beers, but of food and of furniture. Some of it came via a close embrace of the local vernacular. 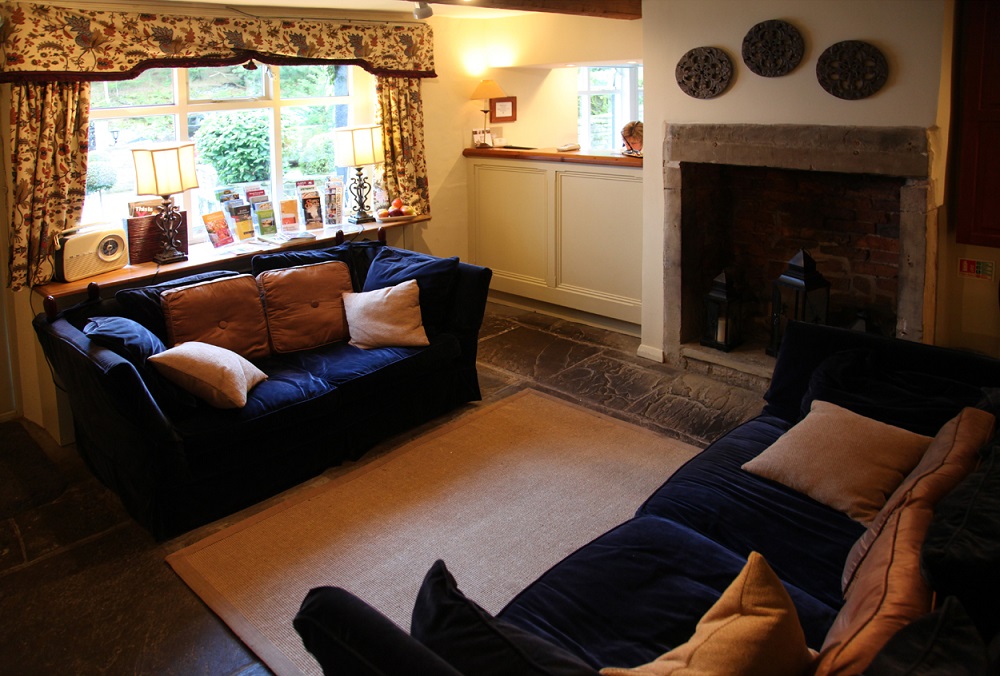 The public areas have struck a fine balance between the food and hotel operation and the very local feel to the bars, with the pub quiz a live feature (note – pub quizzes are ferociously competitive. I once was part of a team of 2 PhD ‘s and 2 Masters graduates which came a notable last in a pub quiz). Yet there is little encroachment one on the other, and the relative sizes seem well balanced – the dining obviously attracts a wide clientele from the area. The spaces are fluid, making both formal and informal dining areas that merge in the evening with no apparent dividers, and which enables the space to be relaxed for the award winning breakfasts in the morning – this pub boast an award from Visit England in 2011 for serving the Best English Breakfast,a ‘full English’, an accolade which will appeal to many readers I know.

Some famous London dining rooms with a reputation for their breakfasts (in part because of the scribes that dine there) would give their eye teeth to serve the home made black pudding served in Shibden Mill. Not that I write about food of course. 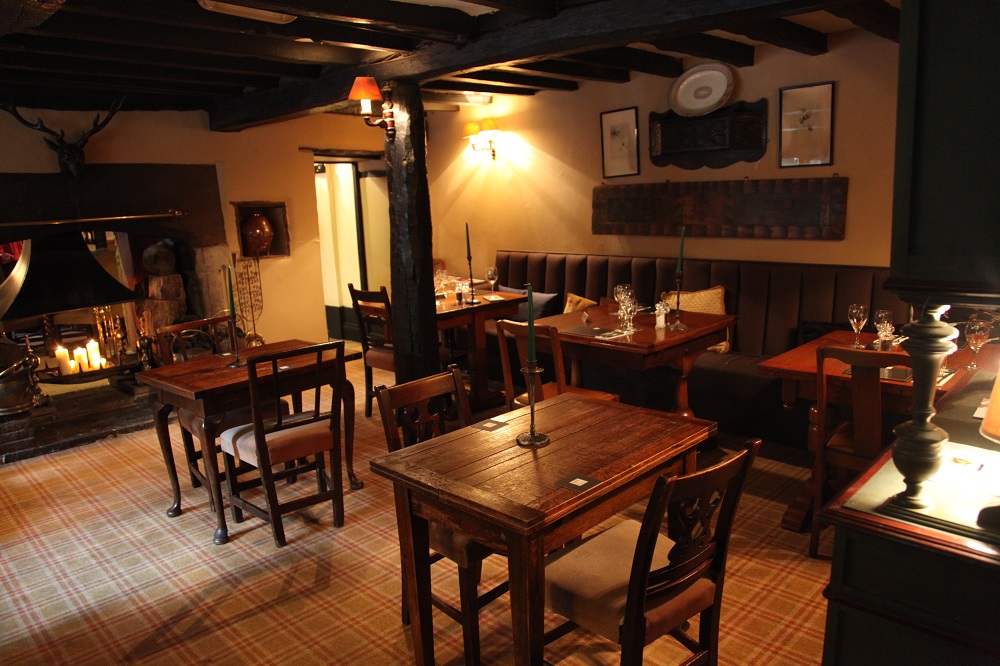 The eclectic mix of period furniture works within the half-timbered space, the blackened oak and white plasterwork set off here and there with strong wall colour washes, and strong upholstery colour. There are no modernist surprises here, just the re-emphasis of the traditional pub atmosphere in a very popular fine-dining setting. The eclectic styling gives visual interest, an ocular background noise like an echoing conversation so that the interior provides visual as well as other sensory comfort. The eleven bedrooms (one of which could be described as a suite) too are given up to sensory comfort. Their design treatment aims to keep the feel of the antique, with exposed beams and stonework, and an eclectic mix of furniture. Their sizes vary enormously, depending on which of the converted buildings they are in. All connect via meandering corridors with the restaurant and bar, although there is no need for guests to come and go via the bar or restaurant as there is a separate hotel entrance.

All the touchstones are here – free Wi-Fi, flat screen TV’s, good sized desks, bath tubs with shower over, although occasionally room has been found for a separate shower. All are away from the bar so quiet, and although they overlook the car park this is rural Yorkshire, not boy racer land, so sound intrusion is minimal. The rooms have obviously been done at different times and as the owners have gained confidence the design treatment has improved. However whilst I would change nothing over the treatment of the restaurant and bar, which both work operationally and are redolent of local traditions, the bedrooms lack the panache that characterises those at the Alma. Character charm works for them however, and the latest room, a suite with its own balconied external area is handled more boldly. 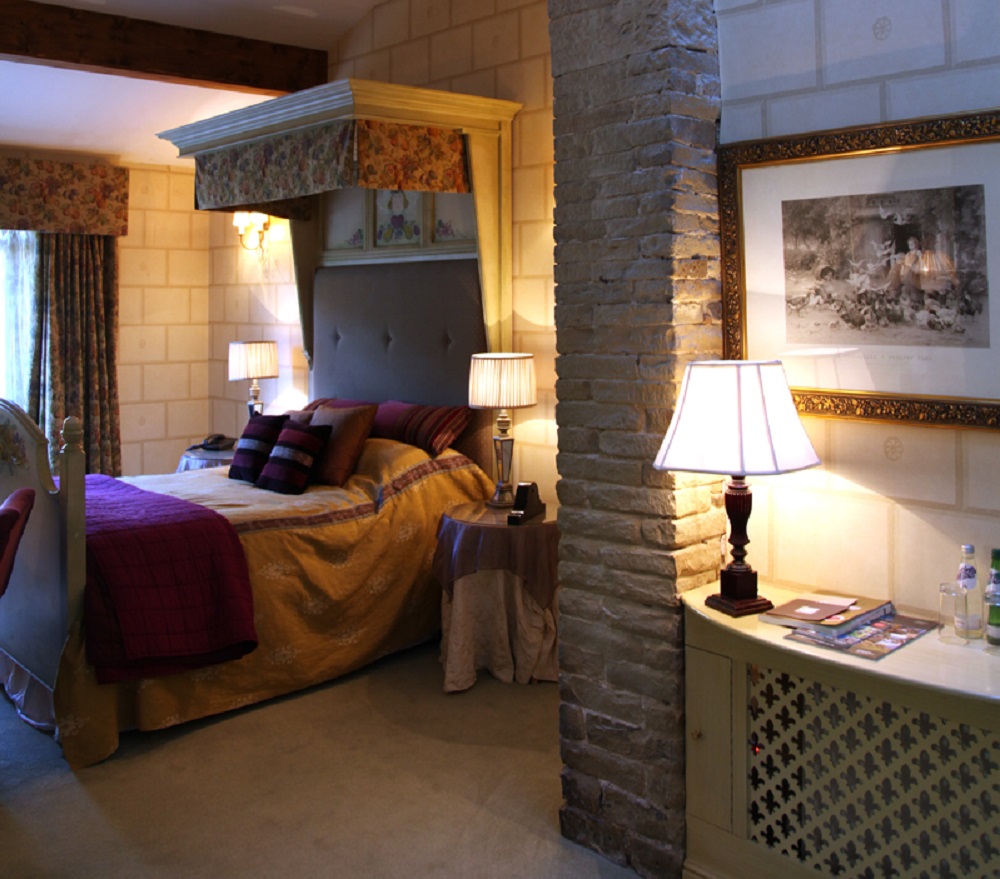 There is a widespread fear that designers are expensive to use, but not every hotelier is able to put together interiors that work. A good designer should be able to save his fee on many budgets by their knowledge of the discount structure in the contract market. Yes if you go to a designer ‘shoppe’ you may well pay full retail, but no good hotel design studio will turn down the opportunity to work on ten rooms and will work on a professional fee basis. Our Directory contains a list of professionals who provide such services and can be trusted to be honest and straight forward in their dealings. If in doubt do consult the Editor who will be happy to assist with advice and recommendation on a suitable designer for your property.

The latest rooms show the growing confidence here. The planning is good, and the treatment of the interior harks back to medieval finishes with stone walling and the use of a four poster bed. Spaces in a building of this age can be very difficult to handle with beams and posts appearing in seemingly irrational positions relating to their previous use. One room has a very high window and a roof light – it used to be a hayloft and store so had not openings in the wall suitable for windows lower down. The solution adopted works and the room is light and airy.

The Inn does not set out to be a style statement but a new rendition of a traditional comfortable Inn. In the public areas it transcends this in part by its exceptional food and focus on local produce, but also by its sympathetic treatment of the restaurant which succeeds in being separate from but very much a part of the bar. The bedrooms also work well. Even if bedrooms feel a little dated conceptually the same focus on guest comfort given to the public areas makes them a very competitive offering for someone looking for a place to stay with a little more character as well as an exceptional food offering at a price considerably less than a four star hotel would normally cost.

All this in an attractive location, quiet, sylvan. If you can find it…

Designers and Owners: Simon and Caitlin Heaton. From a Visit in August 2011