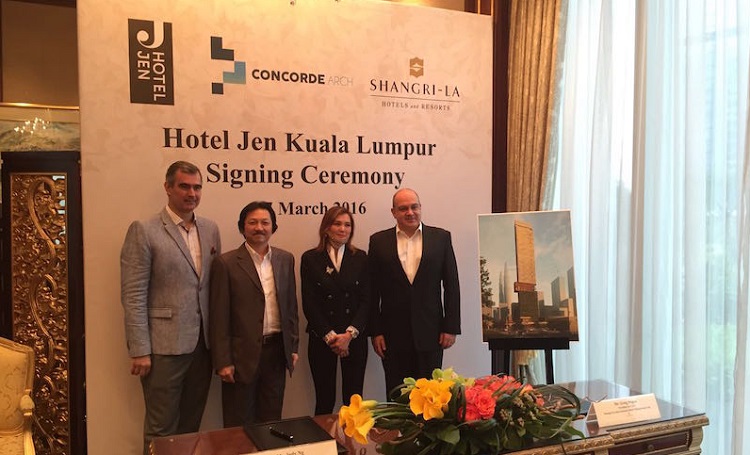 The announcement was made at a signing ceremony held in Hong Kong to finalise a management agreement between Concorde Arch and Hotel Jen.

Concorde Arch initially acquired the land for building the corporate office; however, the opportunity of venturing towards hospitality became apparent with the advent of millennial travellers seeking more curated lifestyle and leisure accommodation inspired by this growing target market.

The hotel is strategically located in the heart of Kuala Lumpur at the intersection of Jalan Sultan Ismail and Jalan P Ramlee, just 800 metres from the city’s landmark Petronas Twin Towers and 300 metres from the KL Tower.

The property will cater to both business and leisure travellers, being in close proximity to the central business district and Kuala Lumpur City Centre (KLCC), as well as having easy access to some of South East Asia’s largest shopping malls, street markets and a wide range of restaurants and entertainment.

Greg Dogan, president and CEO of Shangri-La, said: “The announcement of Hotel Jen Kuala Lumpur reinforces our interest and expansion in Malaysia, in the country’s capital city, where we will now increase the group’s presence with our third hotel and newest brand Hotel Jen”.

Fresh, friendly and fuss-free, the new brand launched a year ago to cater to a new “Jeneration” of independently minded business and leisure travellers. The brand launched quickly with the first ten Hotel Jen properties opening in major cities in Asia Pacific in under one year, followed by two new developments soon after Hotel Jen’s first anniversary. Shangri-La is targeting fast-track growth of the brand in key cities in Asia.