Hotel Designs editor Hamish Kilburn caught up with Richmond International’s award-winning designer, and this year’s headline speaker at Meet Up North, Fiona Thompson, to find out how technology is influencing modern hotel design…

As we sit down to discuss what’s happened in the last three years, I am reminded of how much travelling is actually required to being the Principal of Richmond International. Fiona and her team are certainly clocking up the air miles, splitting their time mainly between London, LA, Boston and now Melbourne.

I last spoke to Fiona Thompson in 2014, when she and her team had just completed the quintessentially British Sterling Suite and Club Lounge at The Langham London. Having just agreed to be our headline speaker at Meet Up North on July 18, I wanted to know how the industry is shaping up from a leader’s point of view.

Fiona Thompson: All sorts really, some of which we are allowed to tell you and some that we can’t just yet. We are scattered all over the world at the moment. For starters, we are working on new projects with Langham Hotel Group in both Boston and Melbourne, which has all come off the back of the work we completed in London and Chicago for the brand. We are also working right now with Rosewood Hotels in California on the Santa Barbra coast, which follows the work we have recently completed at the London West Hollywood. And of course, we are also working at Four Seasons Ten Trinity square, within the beautiful building to create high-end residential apartments.

HK: As Principal, how involved actually are you in the projects?

FT: We very purposefully stay the size that we are as a business because we do want to keep that involvement with the clients. We like to keep below 50 people. Once you go above that, you have to drive a lot of projects through the studio, which quite frankly we don’t want to do. That’s why we haven’t opened offices all over the world, because then the business is only as good as the person running that office. Also, if you take on too much then you can’t possibly stay in touch with all the projects. We run everything out of the studio here in London. The aim is about spending time and being involved in projects. I don’t want to be a business-only person. Could you imagine how dull that would be?!

HK: Can you quite believe that we last spoke when you completed the Sterling Suite and the Club Lounge in The Langham London, nearly three years ago?

FT: Gosh, I know. It was a really interesting project for us to work on. The idea of personalisation is where everything is going at the moment. People rent it [The Sterling Suite] out in such chunks of time that we never actually been back in properly since we completed the project when we last spoke.

In all seriousness, though, the biggest change since we last spoke, I believe, is personalisation. Guests want their hotel room to be personal and special to them. I think the interest has been a huge driver in changing the way in which we design modern hotels.

Even when I travel and I am looking for a hotel, the first thing I do is look up the area. If I’m there for just a few nights, I am more likely to stay in something that is half recognisable. But I think, after that point, when you have been there for a while, you can find such interesting hotels and there is a lot of information out there online. Put simply, people have more choice in where they stay. This has absolutely made the hotel groups rethink their offering right up to the design of the property.

I think it’s really opened up the industry completely. The big brands are trying to make themselves more bespoke and relevant – and this is right down to the food. For example, no longer is there only a steak and Italian restaurant. From our perspective, everything is a lot more thoughtful. 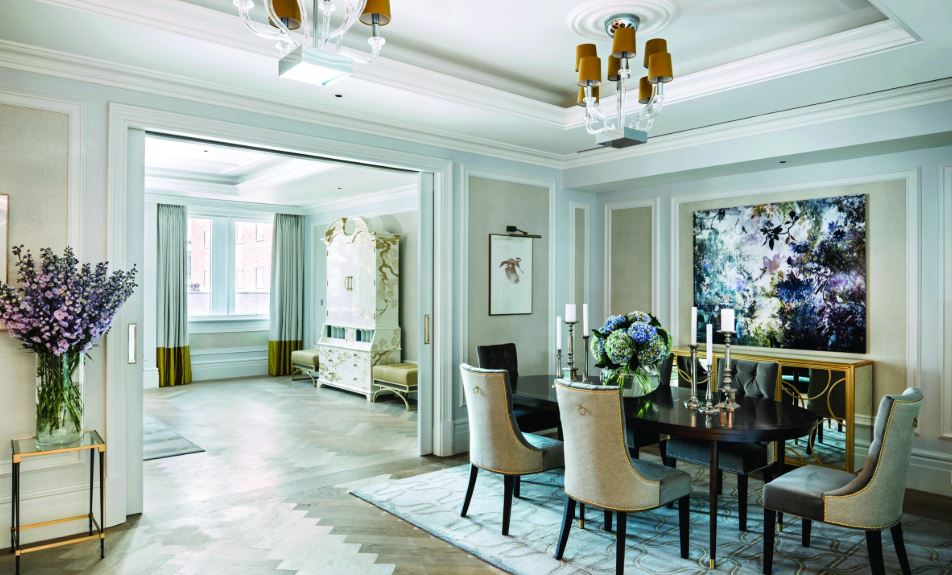 HK: Our spotlight this month is technology, which can be a way of differentiating a hotel from the competition. However, high-tech hotels can also be considered as alienating. Where do you believe the balance lies?

FT: Technology is great as long as it is not challenging the way in which consumers behave. Hotels took a lot from high-end residential, which was a lot of more forward than the hotel industry in regards to the level of technology you can put into a home compared to the capacity of hotels. 10 years ago, for example, you could control your house with a laptop. I think at this point there was a desire in our industry where because you could, hotels felt as if they should.

The point is, though, hotel guests don’t want to learn how to open and close their curtains from a tablet device when they are only checked in for a night or two. Now it is much more important to include technology that is easy to use and also relevant. I think the biggest technology shift currently is seen in lighting. You can do so much more with lighting and it can change a space so significantly. That is a huge change that I believe will continue to evolve as it such an important element of the overall design.

HK: Did you ever find it a challenge educating hotel brands on technology?

FT: It is, and some hotel brands are better than others. I think once groups understand the consumer journey they start to understand why certain pieces of technology would not be relevant.

HK: You recently spoke this year’s Clerkenwell Design Week. What are your thoughts on trends in hotel designs?

FT: It’s so difficult. I don’t think hotels spend that much time on trends. Of course, we are influenced by them, but we don’t respond to them the same way as the fashion world does – or even the retail world does. This is because hotels take so long to realise, so you can’t really respond to trends other than shifts in culture. In hotels, you have to respond much more to the location and how society is shifting. The real trick is trying to think about how that’s going to look in the future. 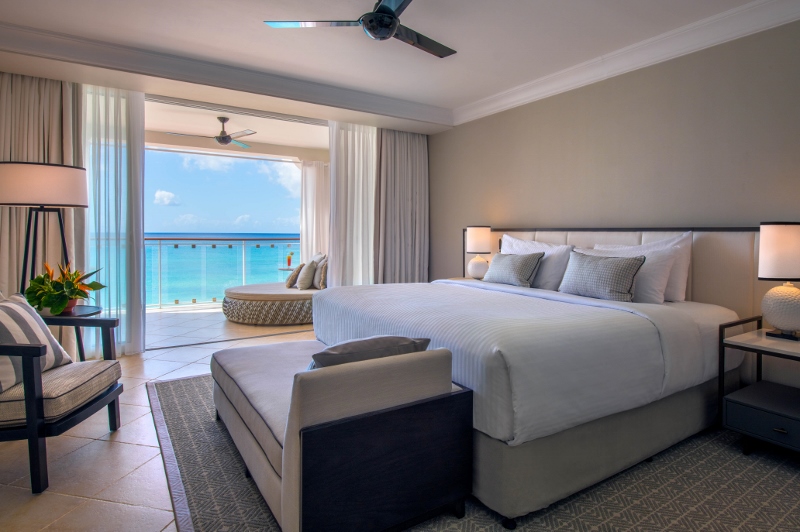 HK: One thing I noticed a few years ago was that feeling of ‘home-from-home’ within hotel design. How has that evolved?

FT: I don’t want a home-from-home. I think people actually want something different. There was that time when we were told that guests want a home from home, and I don’t think people want that at all. I think consumers now want to walk into a hotel room and think ‘wow, that’s really thoughtful’. I believe it’s got to be something that is beyond the Instagramable moment and it has to look and feel more real. However, above all else, the hotel room must be easy to use; it has to be intuitive.

HK: I remember attending a panel discussion of yours on hotel interiors. Out of interest, have your opinions changed on cushions in the guestroom?

FT: Nope, throw them away. What’s that all about? [laughs] I don’t want them on the bed! Cushions in the lobby are fine, but not on the bed. No. Get rid of them! If that’s the only way you can add flair to a room then you have failed. 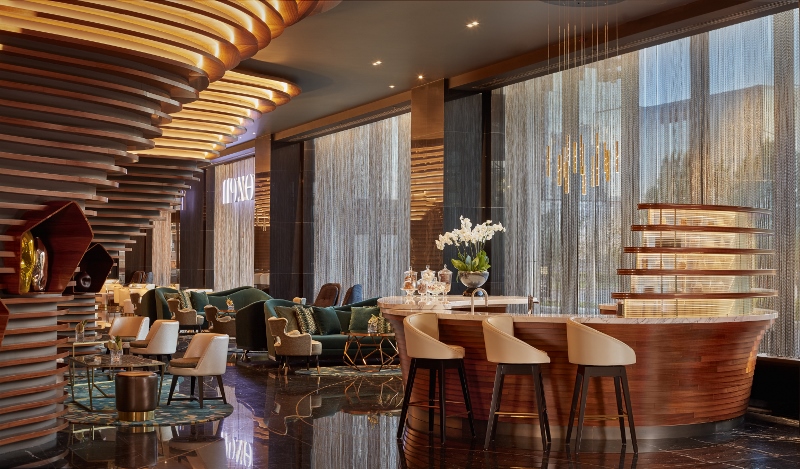 FT: This is so fascinating for me. The new P&O is a big ship and it is all guest-focused – and the interiors very much have to be added around how guests use the space. There is a huge change within cruise ship interior design. The star in the new ship that we are working on is the sea, which as far as I am aware has not been the case with any other ship.

Now, in order to cater to younger demographics, cruise ships are trying to make the sea is a big part of the experience. This means making windows much larger and the relationship between inside and outside becoming more important. Cruise ships are trying to break away from that naff Vegas style, and are turning these ships into places that are more upscale and thought through. It is very different to hotels though. In hotels people leave for starters. Cruise ships really have to capture the attention of every guest as they can be at sea for as long as three months.

The biggest challenge working in cruise ship interior design is the ceiling heights because you are working in large spaces that typically have very low ceilings. Therefore, you have to play all sorts of games as to how to make those spaces feel comfortable and airy. A great way to do that is through lighting.

HK: Has working in cruise ships helped you when designing hotels?

FT: I think it has, and it allows me to think about space in a different way. Although design has not perhaps been as seamless in the cruise ships as it is in hotels, I think it is ahead in other areas. There is a lot of integrated technology in cruise ships and also entertainment is a massive factor. It’s really interesting now seeing hotels thinking about that more.

HK: Where’s next on your travel bucket list for pleasure?

FT: Well I’m going to Norfolk next [laughs]… No in all seriousness, I really want to go to back to Australia, but I need to take a big chunk out which I haven’t managed to do recently. I grew up in Sydney, so I have a lot of fond memories.