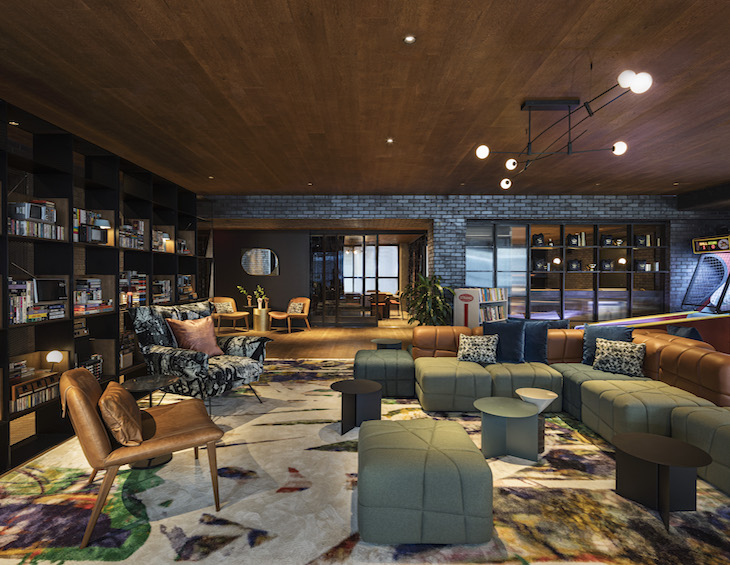 Marriott International’s quirky lifestyle brand, Moxy, which currently has 44 hotels in America, Europe and Asia, makes it a hatrick in New York City, with the unveiling of its third property in the city that never sleeps. Moxy NYC East Village has opened in the heart of East Village, where rock ‘n’ roll, renegade art, LGBTQ+ activism, and generations of immigrants all merged to give birth to American counterculture.

With interior design by Rockwell Group and architecture by Stonehill Taylor, Moxy East Village is conceived as a vertical timeline, drawing inspiration from various eras in East Village history, from the earliest settlers to the punk era to today. Interior design is inspired by urban archaeology, with the hotel’s 13 floors loosely conceived as homages to different eras in the East Village’s past and present, as well as its future. Three check-in kiosks just inside the entrance are assemblages by local artist Michael Sanzone, made from found objects and materials. Behind the kiosks, striped tapestries hang on the walls and bleed onto the floors. Their alternating bands of graffiti and graphics recall shredded layers of wheat-pasted posters—the kind you might see peeling off a downtown building façade.

The guestrooms are, like all Moxy properties, smartly designed featuring the brand’s iconic peg wall. The rooms are completee with trendy hotel bathrooms, which include walk-in rain showers, glazed lava stone sinks and MUK amenities. 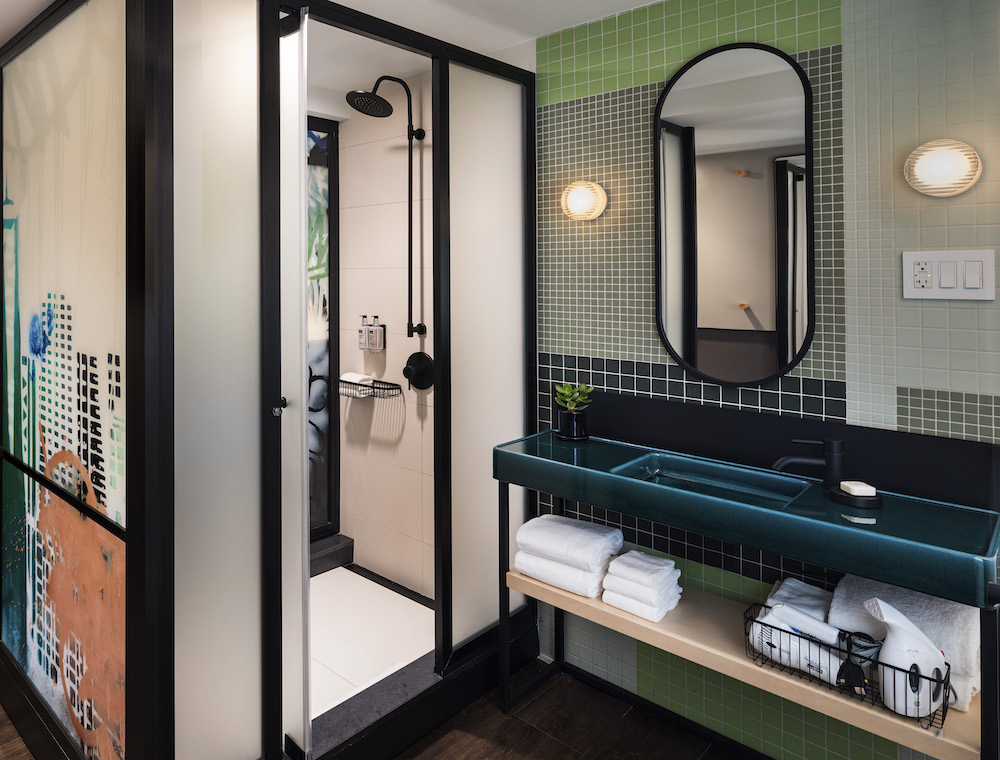 Lightstone has once again teamed up with Tao Group Hospitality who oversees the four brand-new dining and drinking areas at Moxy East Village that offer a multitude of scenes all under one roof: Alphabet Bar & Café, Cathedral, Little Sister and a rooftop bar which will launch in Spring 2020. “I don’t think there are any places in New York where you can get an outdoor café vibe, a coffeehouse vibe, a dimly lit bar, a backyard rooftop party, and a grand dining room all in one,” said Noah Tepperberg, Co-Founder of Tao Group Hospitality.

Alphabet Bar & Café, situated in the lobby, serves as the social heart of Moxy East Village, comprising a bar, terrace, co-working lounge, and meeting studios that seamlessly transition from day to night. The seating includes plush sofas and swinging chairs; a Skee-Ball game provides a hit of nostalgia for the arcade era.  An interactive real-time graffiti installation lets guests use a tablet to draw their own tag or sketch a bit of street art, like a latter-day Basquiat or Haring, and see it projected on the wall. The iconic Strand Bookstore will have a cart in Alphabet Bar offering free books, and nearby Academy Records will offer free vinyl LPs and curated collections so guests can listen to the sounds of the East Village’s past, present, and future—to play on a retro turntable, provided in-room on request.  Alphabet Café serves an all-day menu of custom artisanal brews by Intelligentsia Coffee, freshly baked goods, composed salads, and seasonal panini and tartines.

The centrepiece of Moxy East Village is Cathédrale, a French-Mediterranean restaurant conceived by Tao Group Hospitality Chef/Partner Ralph Scamardella, in collaboration with Executive Chef Jason Hall. As diners descend from the lobby—via a staircase that resembles a fire escape between two East Village buildings—they’ll feel like they’re discovering an abandoned architectural treasure. That’s thanks to the show-stopping Rockwell Group-designed main dining room, a triple-height space covered by Italian artist Edoardo Tresoldi’s dramatic wire mesh sculpture that looks like the apparition of a grand domed ceiling. Named by Forbes as one of the 30 most influential European artists under 30, Tresoldi is revered for his installations in public spaces, including Etherea at the 2018 Coachella Music Festival. His ethereal sculpture for the ceiling of Cathédrale pays homage to the interior of the Fillmore East, once known as the “Church of Rock ‘n’ Roll.” The delicate yet monumental sculpture, called Fillmore, is made from Tresoldi’s signature wire mesh and floats above the main dining room, creating a dramatic dialogue with the restaurant’s architecture. Tresoldi describes Fillmore as an “architectural precious wreck” and a “tribute to the legendary cultural background that influenced not only New York’s culture, but several generations worldwide.”

Under Cathedrale’s soaring, 26-foot ceilings, the space includes a blue-tiled, open-hearth kitchen hung with copper pots and equipped with a rotisserie grill. An outdoor dining terrace, with a retractable roof, also feels like a hidden surprise: channelling the improvised backyard gardens tucked behind many East Village restaurants. The Poster Room, a private dining space that seats up to 26, immerses guests in the psychedelic rock era, its walls and ceiling lined with backlit screen prints of vintage concert posters from the Fillmore East.  Cathédrale brings elemental cooking and a poised French-Mediterranean sense of hospitality to its striking setting. The menu is focused on well-prepared but simply arranged dishes that pay quiet deference to the cuisine of Southern France with traces of Italy, Spain, and Greece.

Located on the lower level, adjacent to Moxy East Village, Little Sister is an intimate, seductive, sophisticated lounge – an update from the underground clubs that defined East Village nightlife in the 1990s. Its clandestine, cavern-like feel is enriched by jewel-toned velvet sofas and plush banquettes, embossed leather accents, a glowing copper DJ stand, and a mirrored-copper bar illuminated by an overhead bank of backlit whiskey bottles. Wood-clad, barrel-vaulted ceilings evoke a hidden underground chamber where whiskey might have been stored in the bootlegger era. Legendary doorman Wass Stevens, will conspire to create an exclusive, in-the-know vibe at the ropes.

Opening in Spring 2020, the rooftop bar is designed to resemble a coveted New York City backyard garden, with strung garden lights, abundant foliage, and colorful patio furniture. A retractable roof allows the bar to be used in all seasons. Behind the bar, liquor bottles will be displayed in stacked plastic milk crates—not unlike those you’d spot on an East Village sidewalk. On one wall, interlaced with crawling ivy, will be a mural that overlays a map of the area with images from the neighbourhood’s musical and artistic history. The venue will be available for private events and hotel programming before its official debut.

“Authentic, local, and experiential have all become buzzwords in the hotel business,” said Hochberg. “With Moxy Times Square and Moxy Chelsea, we’ve seen how putting visitors and New Yorkers in the same space can foster a sense of community. The East Village’s breadth of experiences and layers of history allow us to take that concept to a whole new level. Moxy East Village is multidimensional—a thrilling mashup that lets people honour the past, experience the present, and dream about the future. We’re embracing it all to create a true sense of magic.”

“Moxy is a brand that has always boldly broken the rules of a conventional hotel experience, and we’re excited to be able to bring our fun and spirited brand to New York’s iconic East Village to help evolve the hospitality scene in the neighborhood,” said Toni Stoeckl, Global Brand Leader, Moxy Hotels, and Vice President, Distinctive Select Brands, Marriott International.

There are 96 Moxy Hotels in the pipeline opening in North America, Asia, The Caribbean & Latin America, and Europe.