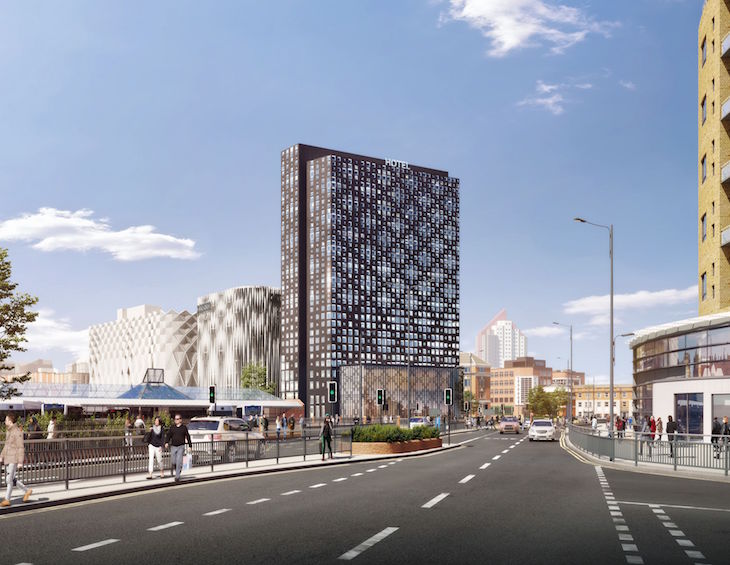 The revealed plans for a 14-storey, 205-key hotel adjacent to Victoria Gate in Leeds aims to enhance Leeds cultural quarter by driving additional footfall and spend to the city…

Hammerson, which owns and manages Victoria Leeds, has today launched plans for the regeneration of a 1,670 sq m site in Leeds City Centre, adjacent to its flagship destination, Victoria Gate.

The plans will see the site, which is currently a temporary surface car park, redeveloped to provide a 14-storey hotel catering for business and leisure guests.

The Victoria Gate Hotel is one of the first schemes Hammerson has brought forward as part of its new City Quarters concept: creating vibrant mixed-use neighbourhoods surroundingHammerson’s existing flagship destinations, in thriving locations in the UK. The concept will see Hammerson transform many of its city venues beyond pure retail into successful neighbourhoods providing homes, workspace, hotel space and accessible public realm. This announcement follows the recent submission of mixed-use masterplan applications for both Martineau Galleries in Birmingham and the Goodsyard in Shoreditch.

The iconic building would sit adjacent to Victoria Gate in Leeds City Centre and see the regeneration of the land between the existing Victoria Gate multi-storey car park and St Peter’sStreet (A61). Designed by architects Acme, who delivered Victoria Gate, the façade takes inspiration from the surrounding architecture and the city’s rich merchandising and textilehistory. The hotel will feature 205 spacious rooms, an on-site gym and conferencing facilities.

A new contemporary bar and restaurant on the ground floor will welcome both guests and visitors to the City’s Cultural Quarter.

“We are pleased to be able to share plans for a new hotel within the Victoria Estate as we continue the roll out of our City Quarters concept in thriving locations around the UK and Ireland,” said Robin Dobson, UK Director of Development and Project Management at Hammerson. “Hammerson has a strong track record of delivery in Leeds City Centre and these plans for a new, contemporary hotel represent the next step in our wider regeneration plans, creating a mixed-use destination where people can live, work and relax, centered around our premium flagship destination, Victoria Leeds.”

The proposed hotel marks the next step in the continued regeneration of this part of the City Centre, following the development of Victoria Gate by the group in 2016. Hammerson also owns a 10 acre site just north of Victoria Leeds which will be brought forward for development in due course, creating a new mixed-use City Quarters neighbourhood.