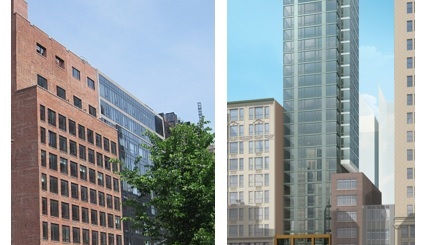 Two Manhattan hotels designed by Gene Kaufman Architect for Quadram Global’s new micro-hotel Arlo brand are slated to open this autumn in Manhattan, one in NoMad and one in Hudson Square.

The 11-storey, 325-key Arlo Hudson Square, which will open at 231 Hudson Street (also known as 503 Canal Street) on September 6, is a 97,000-square-foot hotel created by merging two adjoining parcels. The project increased in size during the design process as two sets of air rights were obtained, allowing the architects to design for a larger space than had originally been envisioned.

The hotel will have expansive outdoor space comprising a large rooftop terrace with a bar/lounge and an equally large ground floor courtyard, also with a lounge. Arlo Hudson Square will also have the latest eatery of Chef Harold Moore, Executive Chef and owner of the West Village’s successful Commerce Restaurant. Called Harold’s Meat + 3, the restaurant will be 2,400 square feet.

The hotel’s interiors, which include meeting rooms, have been designed by AvroKO. Landscape design is by MDD Landscape Design.

The 37-story, 250-key Arlo NoMad will open later this fall at 11 East 31st Street, between Madison and Fifth avenues. One of its many attractions is the roof deck, with its wrap-around views of the city and large terrace, both made possible by the stacked mechanicals that free up the maximum amount of space. The roof is just one of the many spaces the hotel offers guests for relaxing and meeting friends. In fact, with its small but well-appointed guest rooms and its large public spaces, with places to eat, lounge and enjoy cocktails, the 91,000-square-foot hotel will be a new type of high-end hotel, one designed as much for socializing as for sleep.

Says Gene Kaufman, Founder and Principal of Gene Kaufman Architect: “Our goal for each of these hotels was to create a look that reflected the neighborhood in which it resides. In Hudson Square, we’ve used aged brick to emulate the appearance of the area’s historic industrial buildings, while in the more bustling, urban NoMad we’ve designed a light, airy glass tower that floats above its neighbors and towers against the sky.”