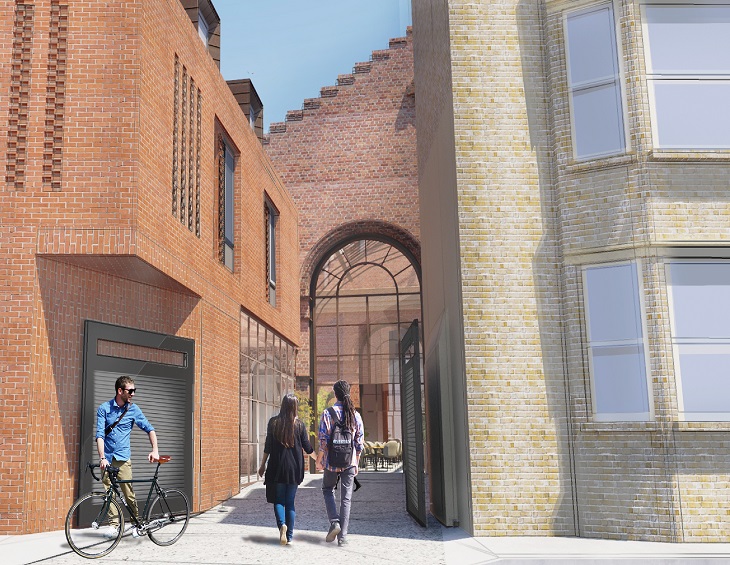 One of Cambridge’s most iconic buildings is to be given a new lease of life following the decision by Cambridge City Council to grant permission for the conversion of the city’s historic former police and fire station into a 57 all-suite luxury boutique hotel and destination tearoom.

Operating under the Rogue City Hotels brand, the hotel has been sensitively designed by established hospitality designer Dexter Moren Associates (DMA) for client Henley and will see key features of the Grade II Listed Hobson House preserved, restored and opened up to the public for the first time in decades.

Hobson House, built in 1901 and located on St Andrew’s Street, sits on a site associated with the charity founded by Thomas Hobson, the 17th century Cambridge philanthropist from whom the phrase ‘Hobson’s Choice’ derives. Over the years, the building has functioned variously as a workhouse, a gaol for the university, a police and fire station and, more recently, as council offices.

Through a sensitive conversion DMA’s design provides opportunities to enhance and reveal significant architectural features of the building, much of which had been lost or hidden through previous alterations. The design respects the important original spaces without significant alteration, whilst new build elements woven into the existing fabric will provide a visual lift to the character of Downing Place to the rear. DMA has proposed that the unique covered courtyard, the former Drill Yard, will be enclosed to become a destination tearoom and eatery in the very heart of the hotel, creating vibrancy and social interaction for both guests and local neighbours.

Given the historic and architectural significance of Hobson House, it is important that the building be respectfully converted to its new use. DMA’s inhouse conservation knowledge coupled with its planning expertise successfully navigated the design through a number of Pre-application meetings and a Design and Conservation Review Panel.

“The building’s original stained-glass windows, ceiling plasterwork and wood panelling will be restored throughout.”

The project has been led by DMA Partner Paul Wells. “Hobson House is an architectural gem located in Cambridge’s historic city centre, with many fantastic original features local people may be unaware of,” Well says. “Sadly, since its conversion to office use in the 1960s the building has suffered from chronic under-investment and its many of its original features have been denied the care they deserve. Now that our hotel proposal has been granted permission, Henley can give the building a new lease of life, not only helping to serve the needs of the city’s many visitors, but also preserving and restoring Hobson House for the local residents to embrace and be truly proud of.”

DMA’s proposals will see the original ornate entrance hall and principal stone staircase retained and repaired to their former glory, alongside the first-floor Chief Constable’s Office which will also be restored with the existing timber panelling and bold ceiling pattern fully repaired. The building’s original stained-glass windows, ceiling plasterwork and wood panelling will be restored throughout.

The exterior façade on St Andrew’s Street will be cleaned using methods that are appropriately sensitive to the stone exterior, to activate and ‘open’ the ornate and historic frontage and welcome visitors into the site.

Nassar Khalil, Director of Hotels and Leisure at Henley and Chief Executive of Rogue City Hotels said “We are extremely excited to have secured planning consent for our next hotel in the heart of one of the UK’s most enchanting cities. As with all our hotels, our focus is to provide guests with design led luxury accommodation, exceptional service, comfort and convenience, and curate a special relationship with the local area. These summed up the key attributes of a Rogue City Hotel.”

To introduce a meaningful and visually exciting new use to the central core of the building, the design creates a landscaped destination tearoom in the double height former drill yard. This will allow the public to access an otherwise ‘land locked’ part of the building, allowing visitors to enjoy the dramatic scale of the space.