Converting Antwerp’s most iconic building into a design hotel 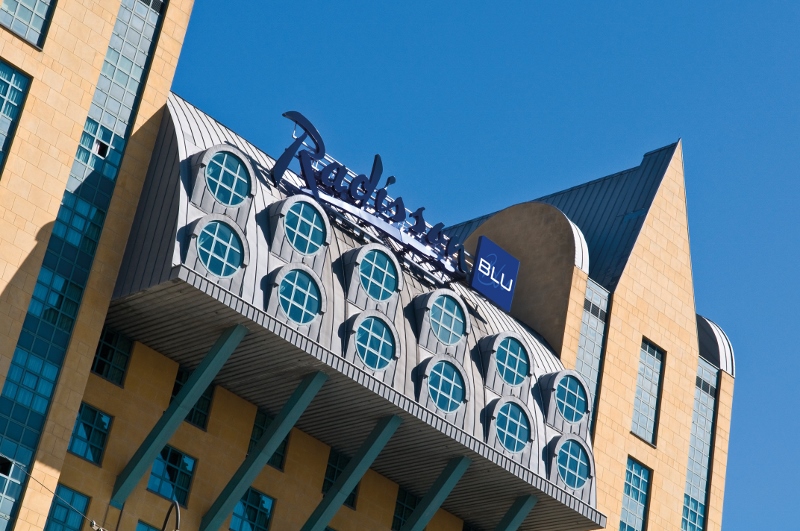 There were three major concepts which drove Alex Kravetz Design’s (AKD) vison of the Radisson Blu Astrid Hotel in Antwerp. The architect of the hotel – Michael Graves, the diamond district of Antwerp and lastly the emerging comic movement. These three elements created a strong concept for the hotel’s design language, creating a link with both the hotel’s foundations, the city’s history and the vibrant future of Antwerp.

Graves, who was one of the pioneers of neo-modernism architecture in the US, created the building which later become arguably one of Antwerp’s most iconic buildings. “It is an example of post-modern architecture and therefore the overall concept for the refurbishment was to create spaces which have a strong relationship with the exterior feel of the building,” said Alex Kravetz, Prinicpal at AKD. 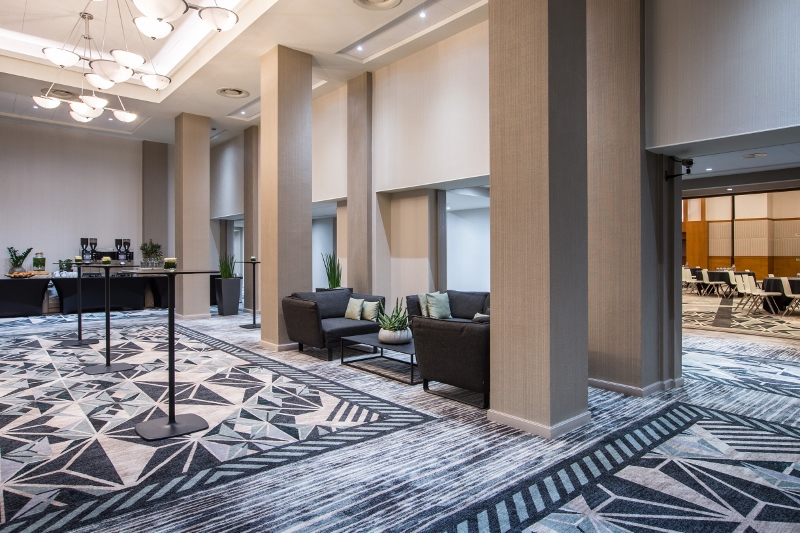 The comic concept was explored due to the famous history of Belgian comics, the new Comics Station which has opened in Antwerp and the comic-inspired graffiti seen on buildings in the city featuring Belgian comic characters.

The Lobby Bistro Bar is a dynamic and stylised space which reflects the postmodern architectural influences of Grave’s building. This has been reflected in a number of interesting ways, one example of this can be found in the rugs. “The bright colours used convey the vast number of colours which were available to postmodern architects, referencing back to the bright yellow and blue hues of the Hotel building,” explains Kravetz. “The pattern developed on the other hand also shows a link with Antwerp’s Diamond district, composed with abstract geometric forms like cut diamonds.” The diamond concept continues throughout the hotel in numerous forms, for example in the drapery fabric of the suites, in the carpet designs of the public spaces and the wall sconces at the Rotonde Bar. Guests checking into the hotel will feel a sense of place and belonging. 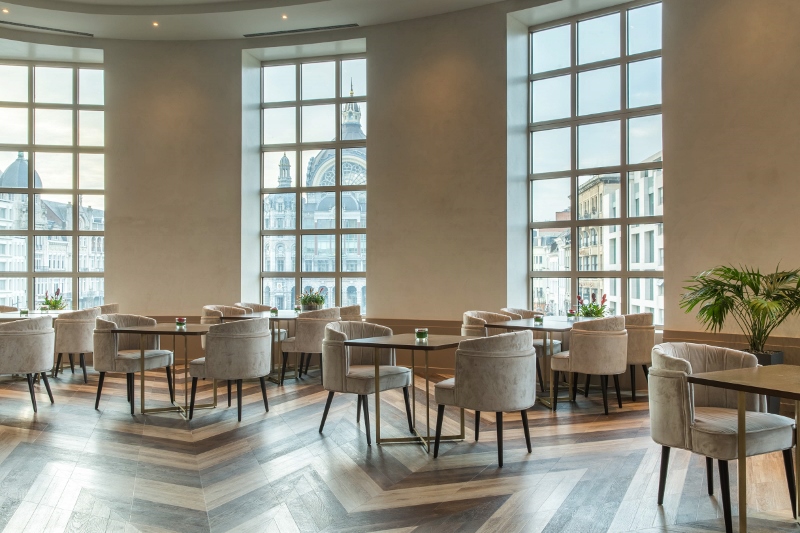 The Rotonde Bar provides an upscale event space due to the stained maple veneers, brushed bronze and textured metal cladding finishes seen against the parquet floor. The banquettes at the windows allow for both flexible seating and great views overlooking Antwerp’s famous train station.

The lobby lounge area offers a multifunctional space where guests can relax in a warm and inviting environment. The feature fireplace wall has an oversized horizontal opening with an Opty mist flame effect fire and a rich industrial finish in Hammered Bronze metal with displayed rough cut timber logs. The Lobby Bar area hosts an industrial feel, with metal finishes in antique and hammered bronze and exposed rivets and hinges. “These juxtapose with the rich upholstery and the postmodern feature wall panels,” explains Kravetz. “Connections are clear between the spaces, although each space has its unique touch as you move between the public spaces on the ground floor.” The lobby restaurants takes a modern yet timeless feel, achieved by the contemporary furniture selection and banquette detailing, combined with the textured wall panels and feature mirrors.

The reception bar has individual reception pods with an abstract bespoke design. The contrasting materials used here set an eclectic tone leading into the lobby lounge. The striking feature banquette provides a key focal point opposite the main entrance, with a triptych of art above by Jeffery Edwards, adding humour, warmth and character. “The art pieces here have been specifically selected to connect with the Comic Room creating a sense of place and originality,” says Kravetz. “The Comic Room is a fun and inviting area where guests can relax and read a comic in a pop art inspired setting. The throw cushions and the accessories contribute to the overall concept and impression in this space.” 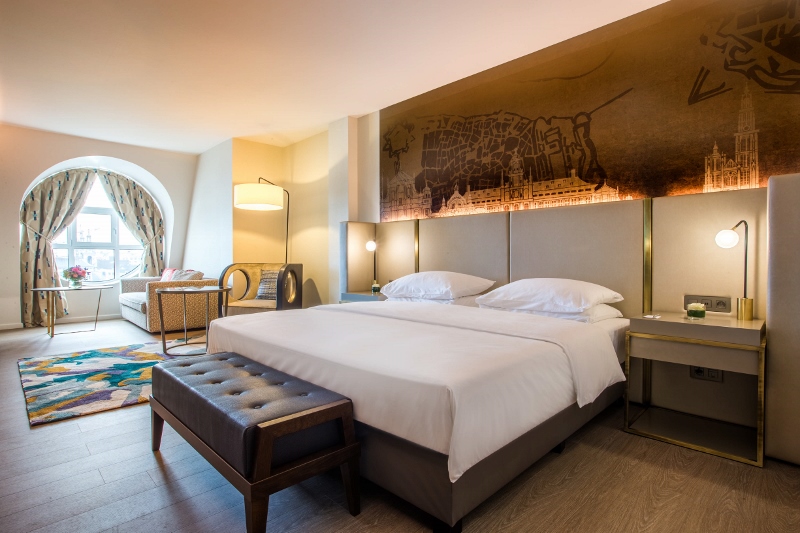 The design of 253 guestrooms offer a stylish and contemporary feel with warm tones that further reference the location. “This project was one of the first to tap into the new Radisson BLU Guestroom concept,” says Kravetz. The rooms may have been developed in line with Radisson Blue’s latest design standards but offers originality in regard to connections with the key concepts outlined and the location of the hotel. Above the headboard there is a feature wallpaper which has been custom developed specifically for the project. “The wallpaper has essentially become a statement artwork itself, showcasing Antwerp’s notable buildings, with the iconic train station in the centre,” says Kravetz. “The defined seating group includes a chair which is custom made for the property, drawing on postmodern architectural elements.” The stitched leather frame and brushed brass detail in the armrests gives a residential feel and the distinctive rug underneath the seating group features the strong, bright colours of postmodern architecture but also offers a luxurious feel to the room. 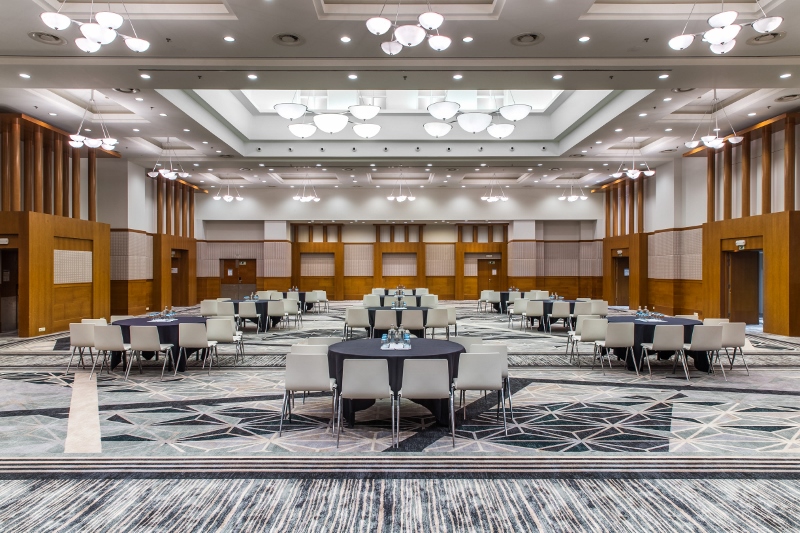 Radisson Blu Astrid Hotel Antwerp is superbly located on the historic Astrid Square near Antwerp Central Station and has unveiled a completely new look and feel following an extensive programme of refurbishment across the entire hotel, with total investment reaching over €9 million.