The new hotel, located in the city centre, will open in February 2019 and is expected to bring a new standard of modern luxury in Washington DC…

Conrad Washington, DC has announced that it will open its doors in February 2019. The 360-key hotel, situated at the corner of New York Avenue and 10th Street NW, is the first for Conrad Hotels & Resorts in the nation’s capital. The property is designed to bring Washington hospitality into a new era of modern luxury with its unique architecture, sleek interior design, inspired art collection and culinary offerings led by world-renowned chefs.

The hotel anchors the second phase of CityCenterDC, a high-end, mixed-use development in downtown Washington, DC known for its collection of upscale retail stores and eateries, and developed by the international real estate firm Hines and investor Qatari Diar.

“Conrad Washington, DC will usher in a new era of hospitality for our domestic and international travelers seeking modern luxury in the nation’s capital,” said Christopher J. Nassetta, president and CEO, Hilton. “With Hilton’s global headquarters in nearby McLean, Virginia, we are excited to introduce the Conrad brand to our hometown.”

Conrad Washington, DC features a sleek all-glass exterior that wraps around its 10 floors, 360 rooms and 30,000 square feet of high-end retail space below the hotel on the ground floor. The hotel’s concept was envisioned by renowned Swiss architecture firm Herzog & de Meuron, best known for landmark projects like the Olympic Stadium in Beijing and The Tate Modern in London. Architect of Record, HKS Inc., served as the Production Architect on the project. Consultant Rottet Studio designed the interiors as a restrained, minimalist expression of purity of thought and design, to complement the carefully conceived building. 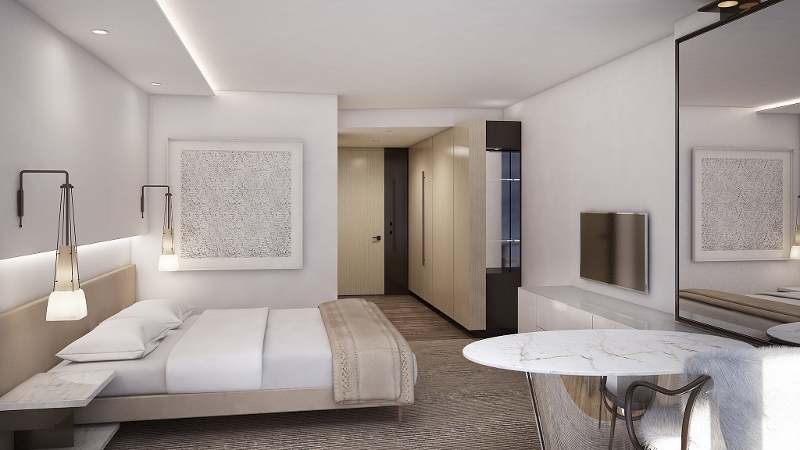 Following the Hotel Designs’ focus this month on art and photography, the hotel also features a contemporary art story that is weaved throughout a unique collection inspired by the Washington Color School movement, curated by consulting firm Tatar Art Projects.

“We are incredibly excited that Conrad Washington, DC will showcase what makes the Conrad brand so unique: contemporary design, curated art and leading innovation that inspires the entrepreneurial spirit of the globally connected traveler,” said Martin Rinck, executive vice president and global head, Luxury & Lifestyle Group, Hilton. “It will not only be a hallmark property for the brand, but a standout hotel for the Washington, DC area.”

“In every piece of its immaculate design, Conrad Washington, DC is breaking the mold of traditional DC luxury,” said Laura Schofield, General Manager, Conrad Washington, DC. “From its preeminent architecture to its spectacular art and elevated cuisine, the hotel’s debut is undeniably the most anticipated hotel opening of the year.”

The hotel is adjacent to CityCenterDC’s high-end retail stores and upscale eateries. “As the capstone to CityCenterDC, Conrad Washington, DC will play an integral part in the development’s continued growth by drawing additional visitors to downtown DC,” said Howard Riker, Hines Managing Director. “At each turn, guests will encounter innovative features and state-of-the-art technology to provide intuitive service to the ever-changing needs of today’s modern traveler.”

Conrad Hotels & Resorts is a portfolio of 34 luxury properties spanning 21 countries, all of which offer guests a seamless connection between design, innovation and culture. The luxury hotel brand was established in 1982 and has properties in the world’s most desirable locations, including metropolitan cities such as New York, Hong Kong and London and leisure destinations such as the Maldives, Bora Bora and Koh Samui.

As part of Hilton, Conrad Washington, DC will participate in Hilton Honors, the award-winning guest-loyalty program for Hilton’s 15 distinct hotel brands. Members who book directly have access to instant benefits, including a flexible payment slider that allows members to choose nearly any combination of Points and money to book a stay at an exclusive member discount.

Conrad Washington, DC will be managed by Hilton Management Services.